Six new models that can all be controlled from your phone.

In 2017, Traeger added WiFi connectivity to its line of wood pellet grills with the Timberline series. While being able to control and monitor your grill remotely is more handy than you might think, the privilege was limited to two models with a starting price of $1,700. Sure, you could also send recipes from the company's app to the Timberline 850 and Timberline 1300 too, but that's still a big investment for a grill. Today, the company revealed its 2019 lineup, and the so-called WiFire technology is available across the board. And the best part is the most affordable model starts at $799.

The numbers in Traeger's product names correspond to their cooking surface area. For example, the Pro 575 offers 575 square inches of grilling space. Keep that in mind as I run through the new models.These grills also offer temperature ranges that make them ideal for both slow-cooked barbecue and high-temperature searing. They use electricity to heat and burn the wood pellets, so they do require access to an outlet, or least an extension cord.

Traeger's Pro Series has been the company's option for a wood pellet grill large enough to cook a considerable amount of food while not completely emptying the savings account. You could call it the mid-range option -- there are cheaper and smaller as well as pricier and larger options from Traeger. Two new models, the Pro 575 and Pro 780, still do just that, but the main addition here is WiFi. This means you'll get the added benefit of remote control/monitoring and the ability to send recipes from the Traeger app.

The new Pro Series grills also have Traeger's D2 Direct Drive that employs a new fan and auger to keep the smoke rolling. The auger can also be reversed if it encounters a pellet jam. Traeger says the D2 setup also helps grills get hotter faster (or TurboTemp), and these new Pro Series models will go up to 450 degrees. Perhaps the best part is the new Pro 575 and Pro 780 will remain at the current Pro Series pricing of $800 and $1,000 respectively. The existing non-WiFi Pro Series models, the Pro 34 and Pro 22, are now $750 and $650 respectively.

The Ironwood Series is an entirely new entry to Traeger's lineup, and the mid-range option for these new WiFire-equipped models. The Ironwood 650 and Ironwood 885 have a pill-shaped design that's similar to the Timberline Series. That construction enables so-called DownDraft Exhaust and TRU Convection features to help optimize cook times, according to Traeger. Those two items debuted on the Timberline as well, so it's nice to see those features make their way to more affordable grills. 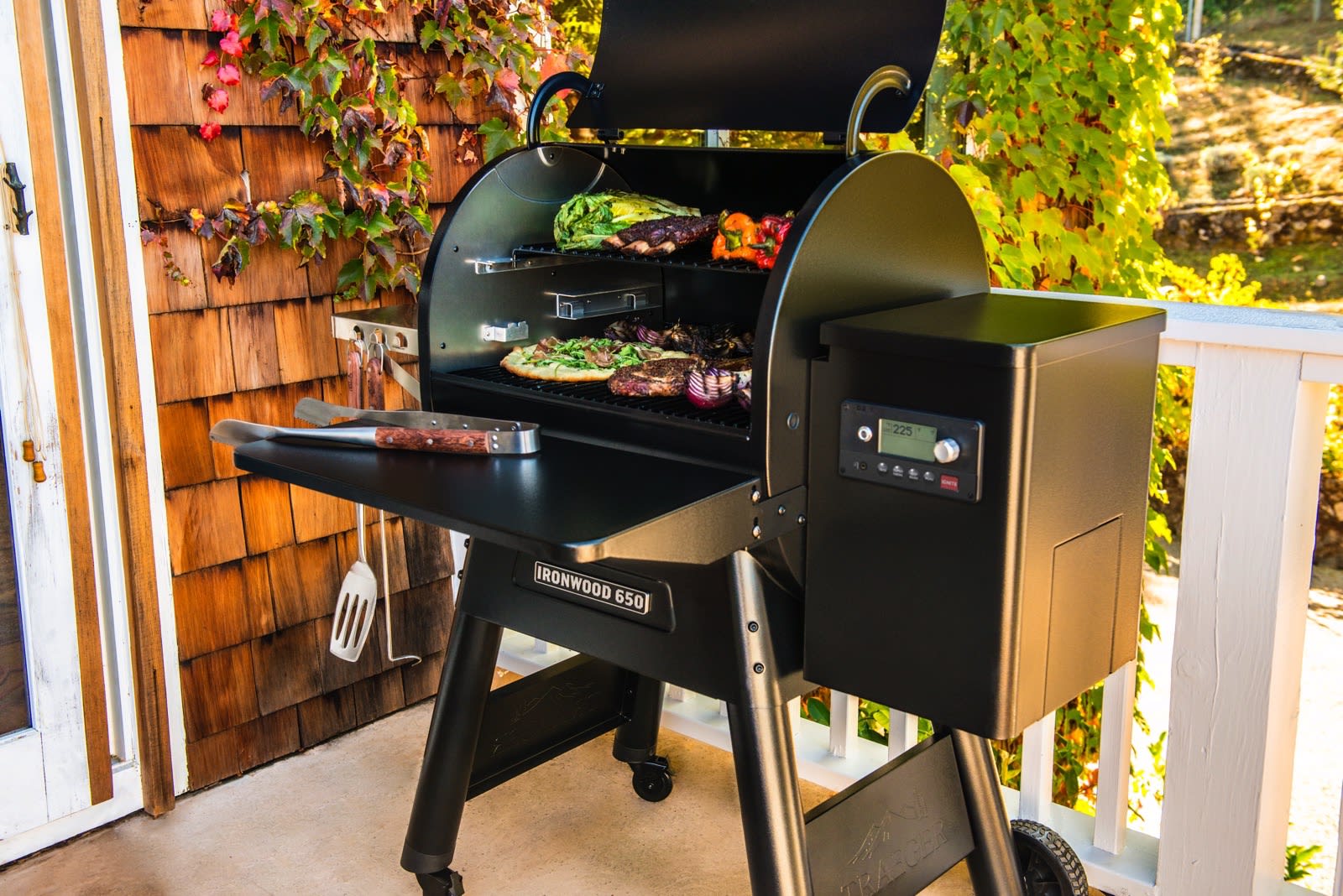 The Ironwood 650 with a front shelf that's unfortunately not included

The Ironwood Series also offers the Super Smoke mode from the Timberline, an option that increases smoke production at the push of a button. And yes, you can switch it on from the Traeger mobile app. Ironwood grills also have a handy Keep Warm mode should you need it (also on the Timberline). D2 Direct Drive is here as well, and these two models can cook at temperatures between 165 and 500 degrees. Basically, the Ironwood Series offers much of what you'd get with the pricier Timberline, but with smaller grills at more affordable prices. The Ironwood 650 is $1,200 while the Ironwood 885 is $1,400.

Lastly, the Timberline Series that debuted in 2017 is back, but with some notable improvements. The sizes are still the same, the Timberline 850 and massive Timberline 1300, but both units now have that improved D2 Direct Drive the Pro and Ironwood Series also employ. The main addition here is a pellet-sensing feature that monitors the level of wood pellets in the hopper so you don't have to worry about running out. 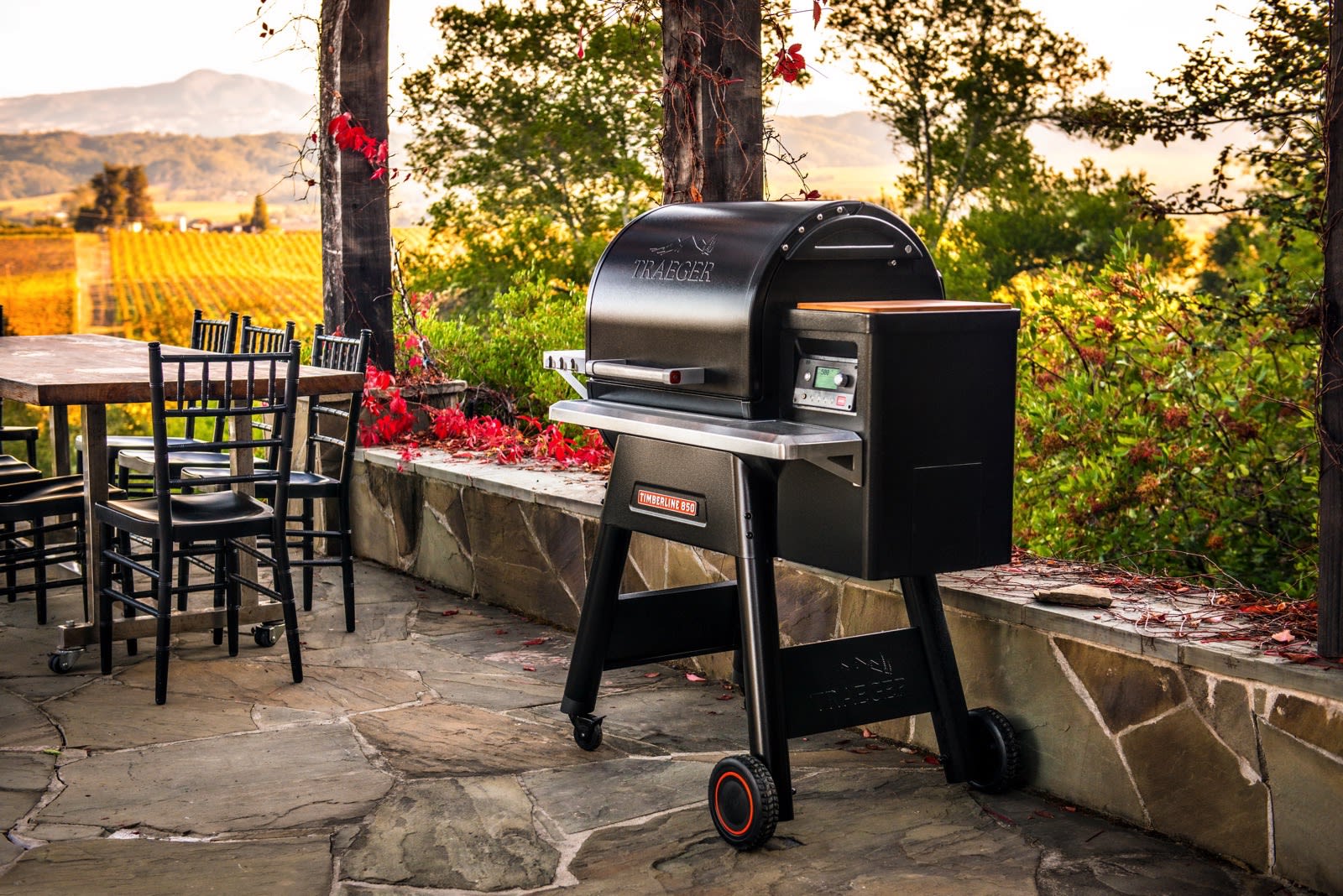 That's typically not a problem unless you don't fill the hopper before a cook or have something that takes much longer to finish (brisket, for example). However, as someone who has run out and had to deal with restarting the grill in the middle of cooking, this tool should save some headaches. The pellet-sensing tech will also keep track of levels in the app, so you can check your supply while you're out shopping.

Like before, the Timberline Series also offers three removable grill grates to help you maximize the cooking space. These new Timberlines are more expensive than the first pair though: the Timberline 850 is $1,800 and the Timberline 1300 is $2,000.

Both the new Pro Series and the Ironwood models are available now. The new Timberline Series is up for preorder and ships in 4-6 weeks.

Even with the other updates, the WiFi connectivity is still the main attraction across Traeger's line of new grills. The company isn't the only one building grills than you can control or keep an eye on remotely though. For example, Green Mountain and Rec Tec both have WiFi-enabled models, and in some cases, the options from these two are more affordable than Traeger. I can't speak to the quality as I haven't used them, but just know you have options if you're looking for a connected wood-pellet grill this spring.

All products recommended by Engadget are selected by our editorial team, independent of our parent company. Some of our stories include affiliate links. If you buy something through one of these links, we may earn an affiliate commission. All prices are correct at the time of publishing.
Traeger makes built-in WiFi a standard grill feature
bbq
engadgetoutdoors2019
gear
grill
grills
home
ironwood
ironwood 650
ironwood 885
outdoors
pellet grill
pro 575
pro 780
pro series
smoker
thebuyersguide
timberline
timberline 1300
timberline 850
traeger
wifi
wifire
wood pellets