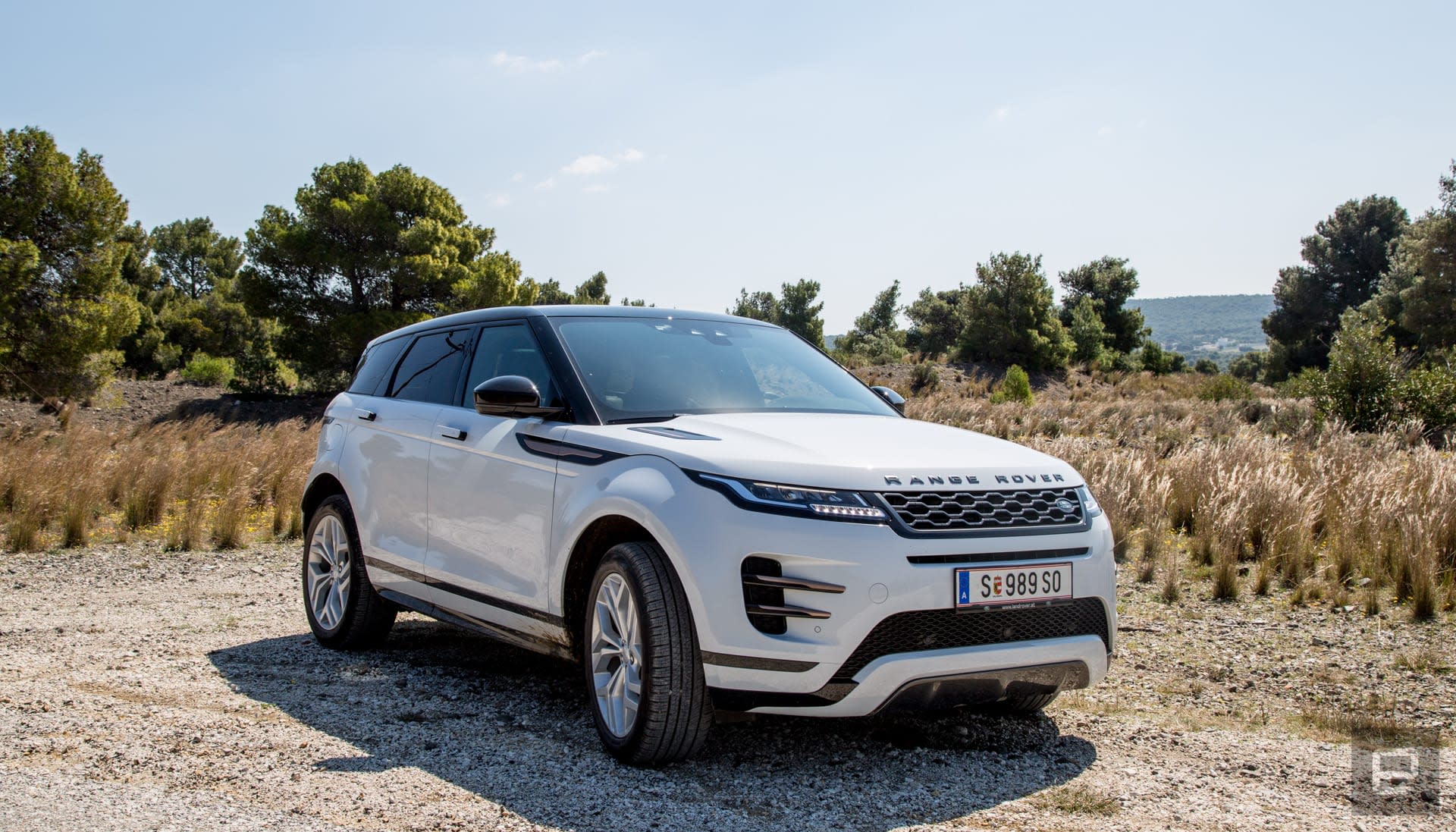 Sadly most will never use the coolest function.

The Range Rover line of vehicles commands a premium price. The British automaker is known for luxurious SUVs that are able to navigate the toughest terrain. That well-earned reputation includes all its vehicles -- even the entry-level Evoque, which has seen a slight design refresh and has received all the latest tech. The most intriguing is the new ClearSight Ground View that helps keep drivers from scraping the bottom of the Evoque while off-road.

The Evoque (starting at $42,650) is the baby of the Range Rover lineup. It's smaller, less expensive and it's one of the best selling vehicles in the automaker's stable. And it's no wonder. It shares the interior luxury, off-road attributes and asphalt driving experience found in other Land Rover vehicles with an updated tech suite.

While it's unlikely that most owners of the Evoque will ever use ClearSight Ground View for anything other than making sure they're not driving over a curb, it's a slick way to see what's under a car. The system uses the front-facing cameras on the grill and doors to create an image of what's actually under the front of the car. On the center display, you can virtually see through the bonnet. It does that by using images captured seconds before while the vehicle is in motion. So what it shows is not technically in real time; it's what the SUV's cameras saw microseconds before.

Still, it's a great new feature and if you're slowly making your way up a rock-studded road it can mean the difference between scraping the bottom of the Evoque and deftly moving the SUV out of harm's way. In addition to the image, ClearSight also shows the orientation of the front wheels so you can see how far you have to turn to keep from damaging the vehicle or stop and back up so you don't roll over a sharp rock. The system only works up to about 30 kilometers an hour (18.5 MPH) so it's meant for navigating exclusively at slow speeds.

Unfortunately, I only got a short amount of time behind the wheel of a vehicle that had this system installed. So I look forward to putting it through its paces in the future. 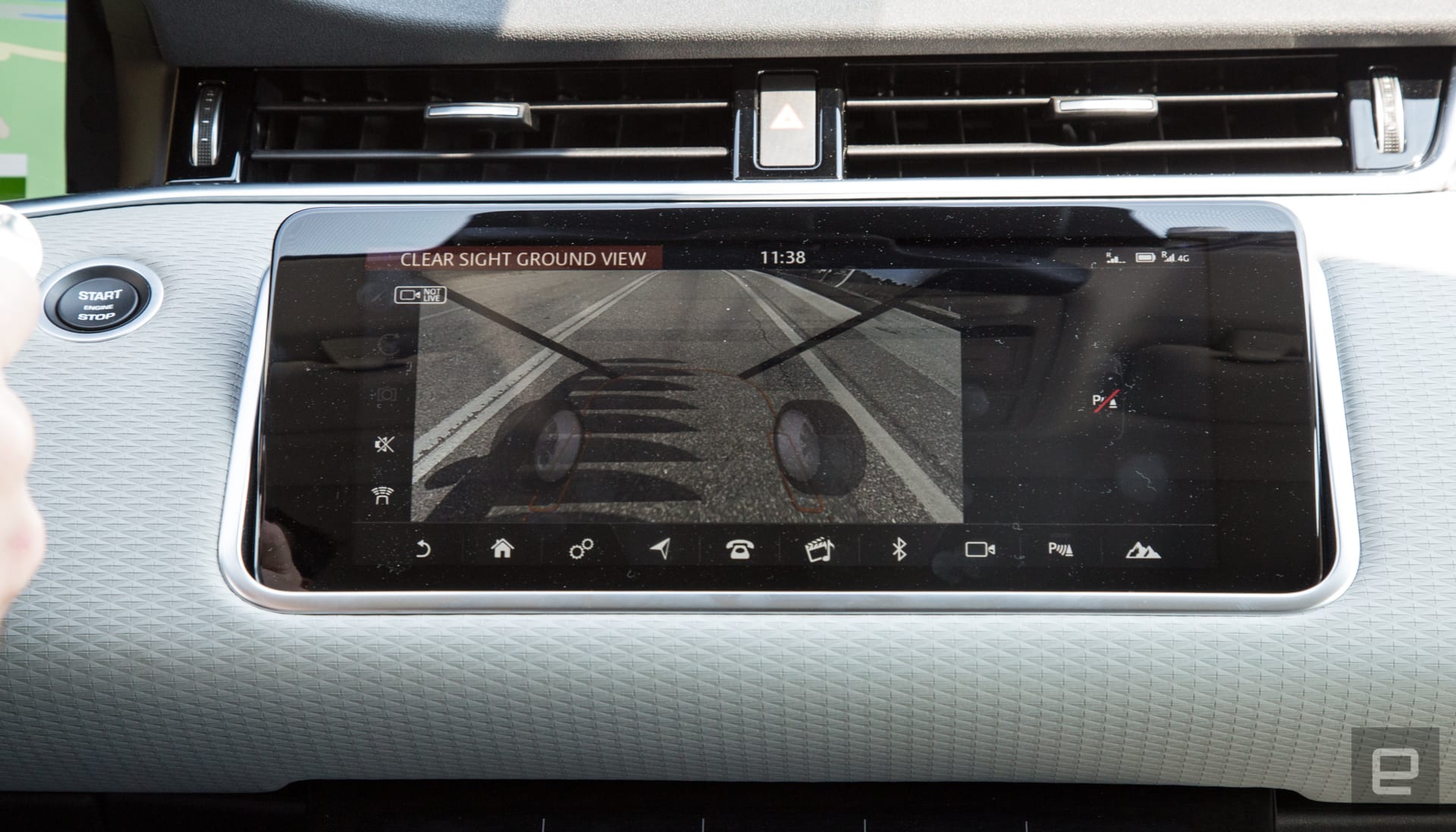 That future testing should be fine since Land Rover made sure to keep placing me on dirt roads during a drive which involved running through streams and rutted trails to show off the Evoque's off-road bonafides. It's a bummer that most owners of the Evoque will never take it off road other than in the VIP parking lot of Coachella. The SUV made short work of gravel roads and could be counted on to make its way through streams and narrow openings. Even without ClearSight Ground View, the Evoque was ready to tackle its time off the asphalt.

While driving through small rivers, up hills and over rocks so large that one of the wheels left the ground, the Evoque never felt compromised. Land Rover says the SUV can handle water as deep as 23.6 inches, though the deepest I encountered was maybe six inches of running water. The automaker offers the option to manually place the vehicle in different off-road modes, but the Terrain Response 2 system studies the road, traction and other bits of information and dynamically sets the car in the appropriate mode. The only time I actually needed to make to set the mode was when I was driving up or down a steep incline and Land Rover's tech helped with that.

On hills, the vehicle's brakes hold should be welcome to the incline-traversing folks of San Francisco and anyone with a house off the beaten path on the top of a hill. While pointed up a dirt road with a 24 percent incline, the Evoque's hill start was impressively smooth. You let off the brake and depress the accelerator and the vehicle pushes power to the wheels as it sees fit to make the transition from a standstill to moving as seamless as possible. No backsliding here. 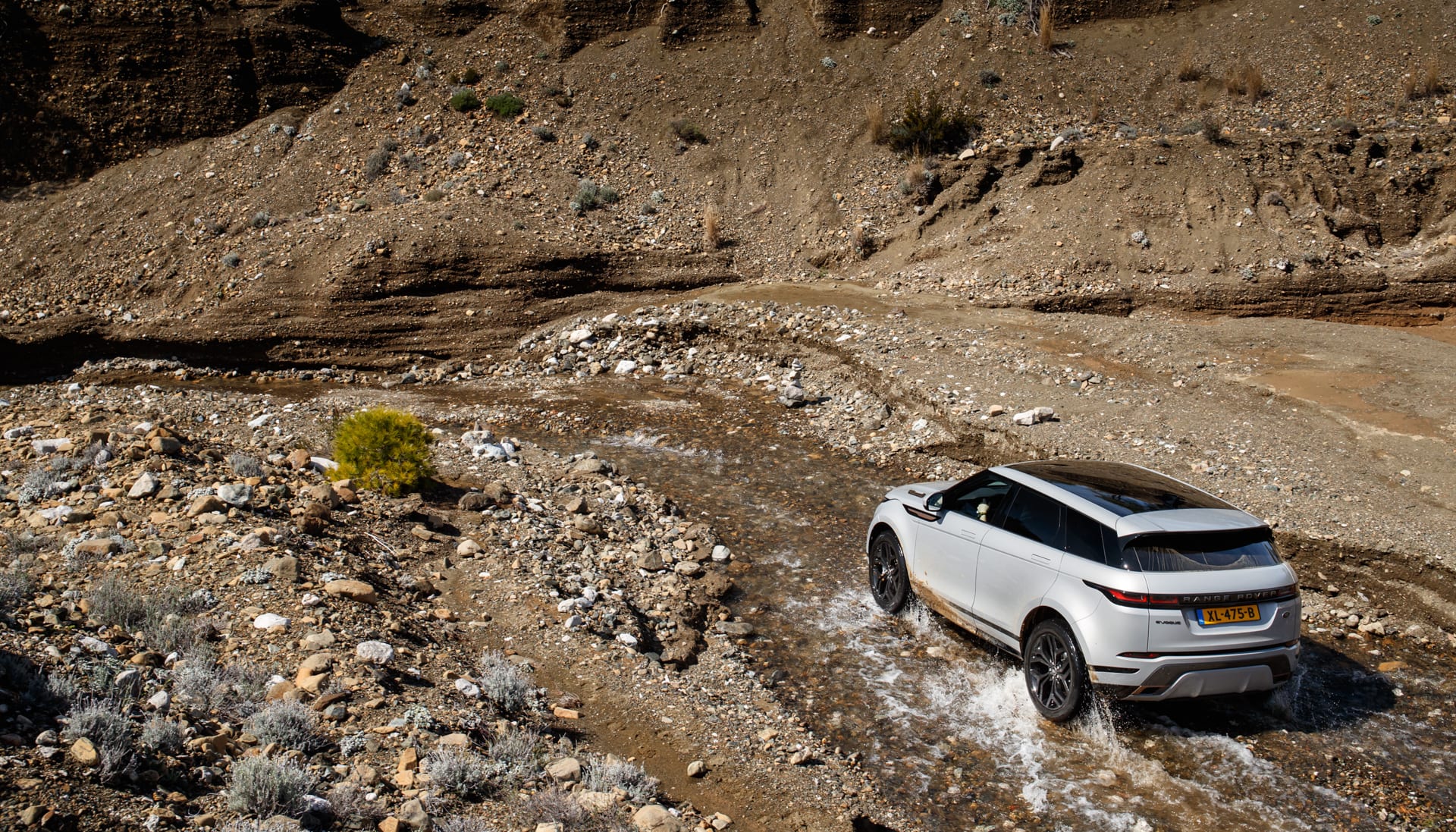 Sadly, the majority of the Evoque's life will be on the asphalt and this is where the Evoque reminds us that it's primarily built for luxury, not sport. The SUV ships with a turbocharged 2.0 liter 4-cylinder engine. That power plant is used in both trim levels. The P250 is capable of 249 horsepower and 269 foot-pounds of torque. Meanwhile, the P300 (which uses the same engine, but tuned differently) outputs 296 horsepower and 295 foot-pounds of torque. In the US, that more powerful version for the Evoque ships with a 48-volt mild-hybrid that adds a bit of efficiency but mostly makes the autostart a more seamless process, as it propels the vehicle from a dead stop without having the wait for the engine to restart.

Once you get going the Evoque is like most other Land Rovers. It's built mostly for leisurely jaunts. It has the power to keep up with traffic, but it doesn't come close to competing with quicker offerings from BMW and Audi. It's not supposed to. During the test, I was unable to get behind the wheel of the more powerful P300 trim level. That 50ish extra horsepower (along with the mild-hybrid system) probably adds some additional oomph for passing but the P250 is probably fine for most urban drivers.

Navigating around corners, the Evoque is best in sport mode with active dampeners to suck up the bumps and reducing body roll. But like its acceleration, the ride is in line with the rest of the Land Rover stable of vehicles. They're not built to go fast -- they're built for luxury and taking on the off-road elements. 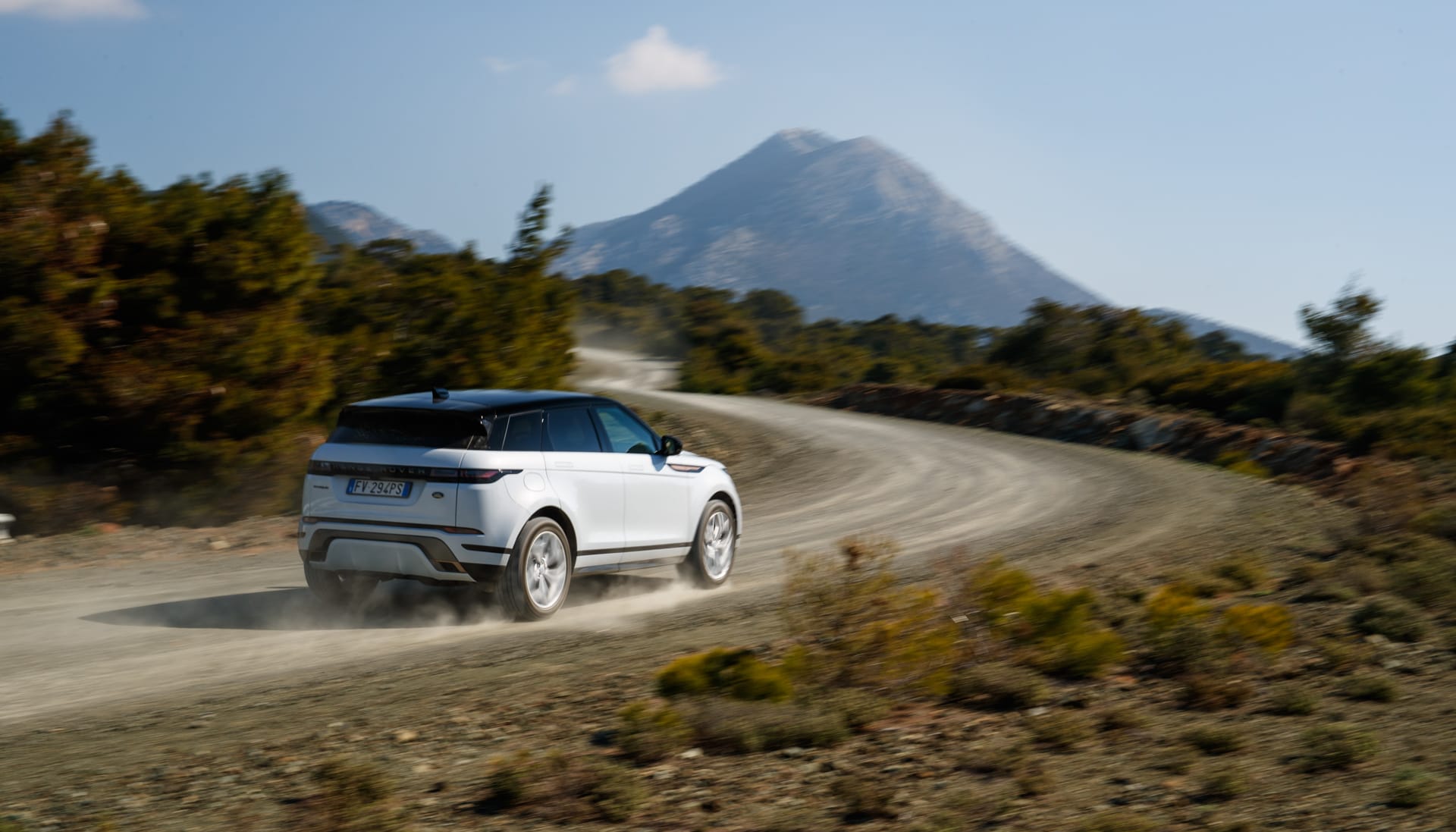 But an eye on the outdoors life doesn't take away from the tech of the Evoque. In addition to new ClearSight Ground View, the SUV comes with a rear view mirror camera that expands the field of view behind your car without having to worry about any blind spots due to rear passengers. As with the Cadillac and Chevy Bolt, I'm a fan and am looking forward to more automakers putting this feature on their cars.

The infotainment system is the same as what I've seen in other Range Rovers, like the Velar. The dual screens divvy up system tasks, with the top screen taking care of navigation, settings, media and communications. Meanwhile, the bottom display is where you control the climate control, vehicle modes and seat adjustments. The two multi-purpose buttons still take a few hours to get used to because their task changes depending on the feature selection you've navigated to. But I still like the design and how they work. If only the automaker could reduce the latency of the system. It still feels sluggish compared to offerings from other premium brands. Fortunately, it supports Android Auto and CarPlay which while they are in the use, the latency seemed to decrease. 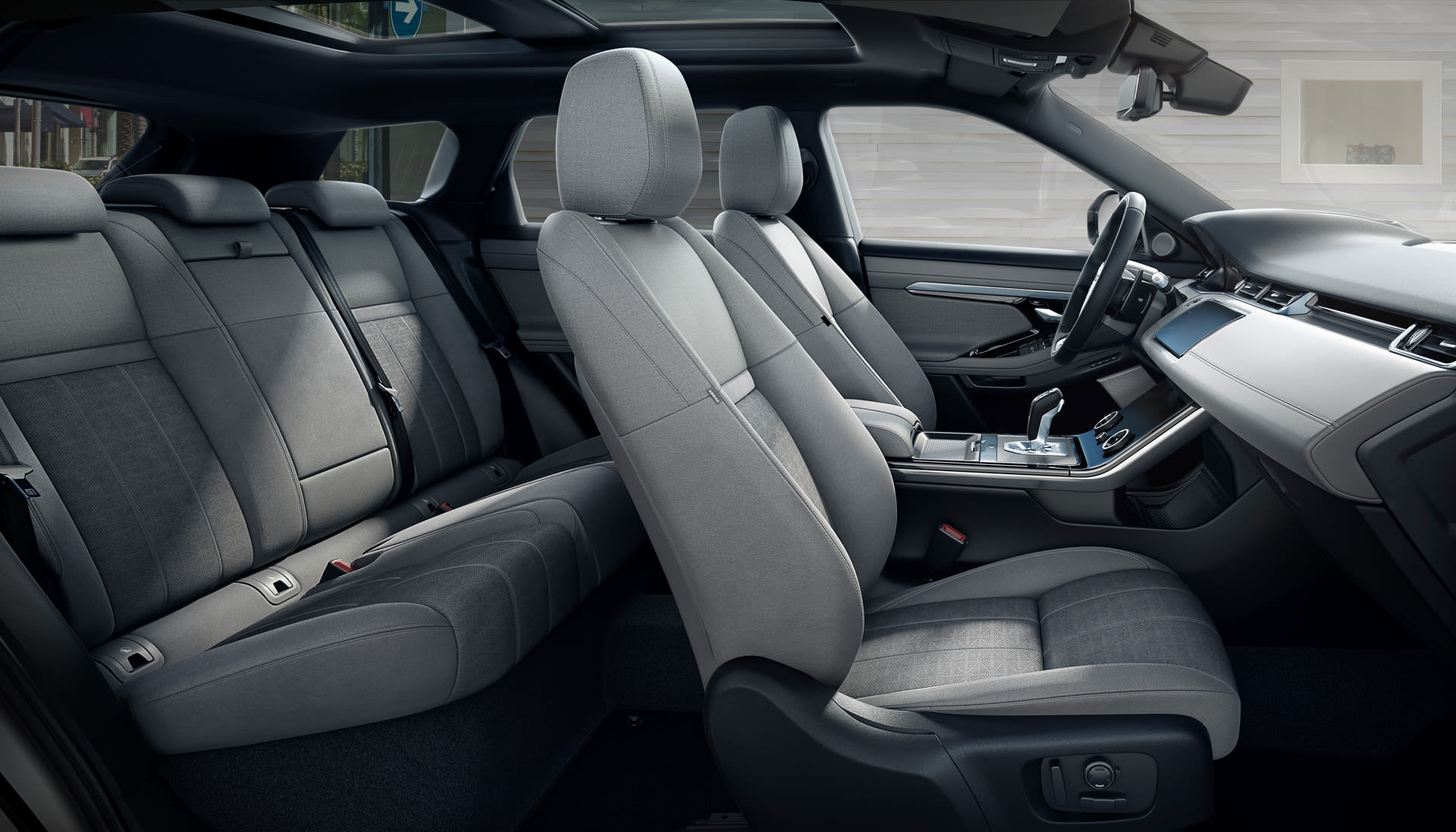 The rest of the interior is comfortable, with all the Range Rover amenities I've come to expect. Leather seats are available, along with more eco-friendly options for outdoorsy folks who want their cars to be animal-free. At six-foot-three I had plenty of headroom in the front and back seats and as long as another tall human didn't have the seat all the way back, the rear seats are fine for people with long legs.

When you do transport your friends (either tall or short), you still have enough room for all their stuff. With the rear seats up the back has 21.5 cubic feet of cargo space. Enough for camping, glamping (at Coachella of course) and runs to the mall. 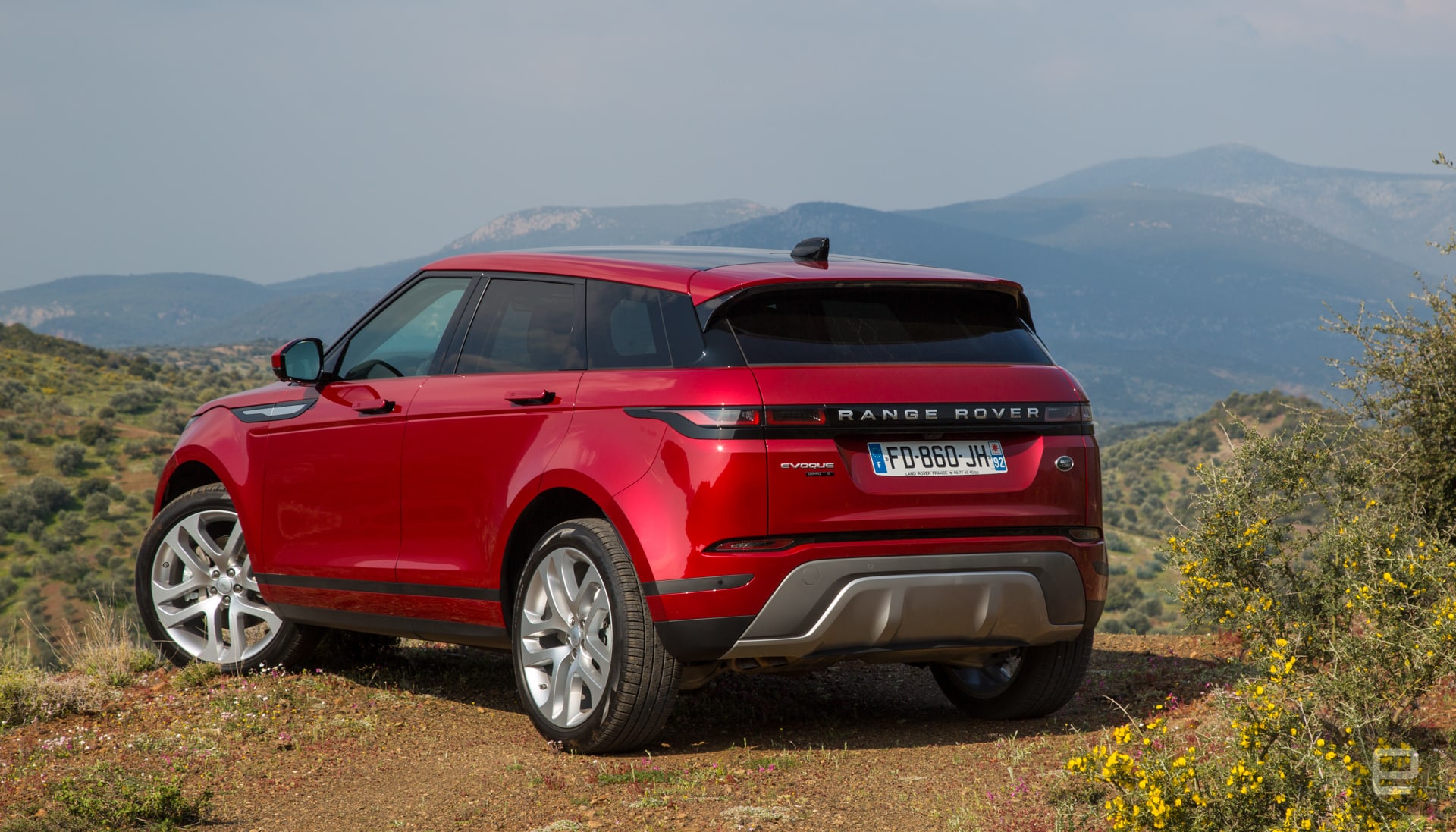 The latest Evoque takes all the great parts of the old version and makes it better with a slicker design and upgraded tech. Sadly some of it will never be used to its fullest potential (like the rest of the SUV), but it's good to know it's there if you ever need it.