Power users will love the flexibility.

Huawei wants to establish a new smartphone imaging frontier (again) with the P30 Pro , and it looks like it's succeeding. With up to 10X zoom, a wide-angle lens, a similarly killer night-shooting mode and a time-of-flight camera that might be this year's secret weapon, can all this hardware best the Pixel 3's software smarts?

Immediately after the big on-stage reveal, I took the P30 Pro to the streets of Paris, because a) the Eiffel Tower is very zoom-friendly, and b) the nighttime streets are pretty darn gorgeous. 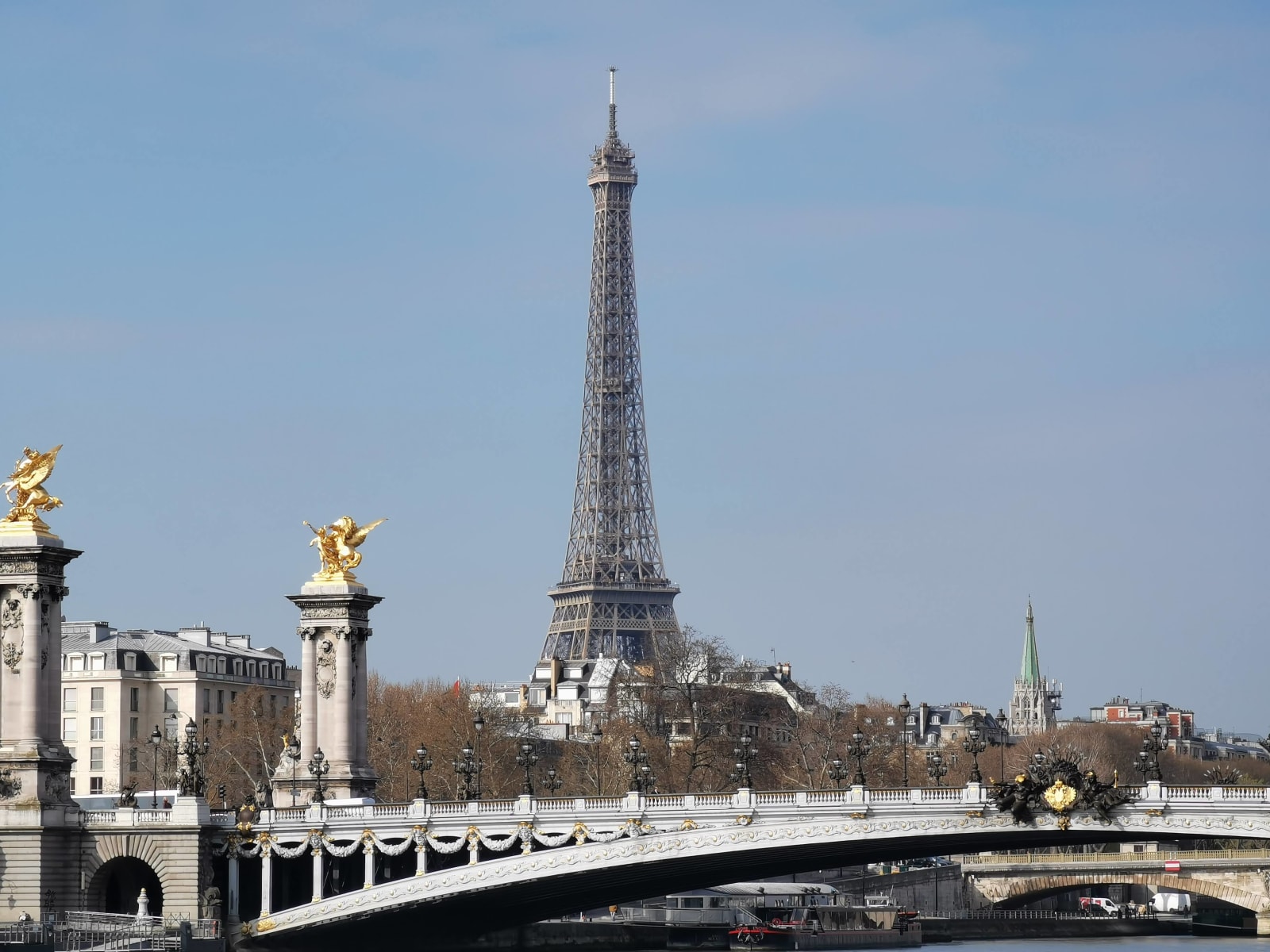 Let's start with all the hardware numbers. The main camera is a 40- megapixel SuperSpectrum sensor with a low f /1.6 aperture (that's very good ) as well as optical image stabilization (OIS). Next, we get another telephoto lens paired with an 8MP camera which also has OIS. The crucial part here is that the telephoto lens is capable of up to 5X optical zoom, with Huawei using a new periscope design to cram more space (vertically) for the lenses to exist.

Like older Huawei phones, there's also a new Hybrid zoom that combines those lenses to create an incredulous 10X zoom, a blend of those two sensors. This isn't a typical digital zoom. It's also not awful. Instead of a monochrome camera, the P30 Pro borrows from the Mate 20, adding an ultra wide-angle 20MP camera, adding more shooting flexibility to the package.

It's a quad camera package this year, however. The new addition isn't a camera in the traditional sense. Instead of capturing images, it gauges depth and distance of subjects from the camera. This not only helps with focus, which is faster, albeit not noticeably so, but also opens up more augmented reality possibilities.

The P30 Pro's Portrait mode is where the ToF camera comes into its own, crafting a faux bokeh effect without the need for an expensive DSLR camera and lens. And boy, it's miles ahead of the competition.

Once you've got a face detected (and that's necessary -- this trick won't yet work on your latte art and pizza Instagrams ), the ToF camera helps the phone figure out exactly where everything is, meaning no more fuzzy clouds of hair near the subject, blurred out backgrounds and foregrounds, and a more accurate bokeh effect. Think smaller blooms of light, nearby, and bigger ones in the far background. 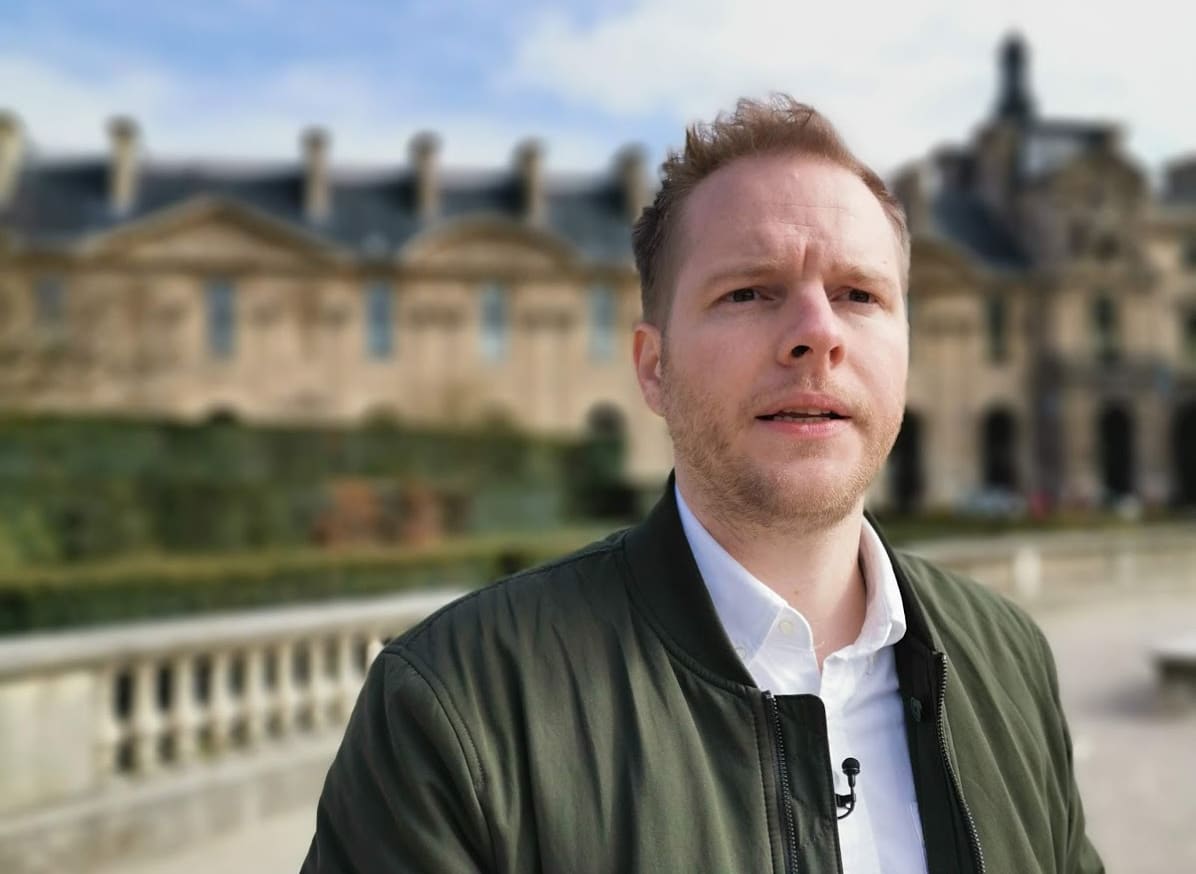 This is all done with incredible speed: As I grabbed some candid shots on the streets of Paris, the phone needed less than half a second to lock-on once it had detected a face. It's able to discern hair, glasses and earrings with an uncanny success rate, especially in well-lit situations. And this hybrid shooting mode can reach 3X zoom, even if it's a little less successful at face detection up close.

So that was a pleasant surprise. I had expectations, though, when it came to the P30 Pro's zooming capabilities. We've been spoilt by the P20 Pro and the Mate 20 from Huawei. I expected a pretty great experience; the question was whether this year's model could handle the leap to 5X zoom -- and whether the 10X hybrid zoom was even useable.

It is very, very useable. With optical zoom at 5X (the latest iPhones do 2X, last year's P20 Pro did 3X), it's already at the head of the pack. The usual sights of Paris were closer than ever, and I could crop into highly detailed features across the Parisian skyline. Check out these gargoyles.

The latter photo is the hybrid 10X zoom in action. It's a revelation in smartphone photography, if only because of how smart the stabilization is. Do I even need my Sony RX100 compact camera in emergencies? Would the P30 Pro suffice? The phone offers a tremendous array of shooting options -- dare I say more than a lot of standalone cameras?

Want another shooting mode? Try the ultrawide camera, which is great for tight shooting situations or when you want to cram more people into a group shot. It's also great for macro photography, pulling in incredible detail when shooting up close.

Back to the zoom features, which also work at night. I'd put the impressive performance here (see the night-time shots, at full hybrid zoom) down to the SuperSpectrum sensor. Most sensors detect red, green and blue light, but Huawei has swapped the green for yellow -- why? Because of optical science, according to the company. It says this adjustment allows it to grab 40 percent more light, while tweaked algorithms ensure both photos and video still look like they should.

With less light, zooming, focus and detail should be a struggle, but the P30 Pro mostly shrugged it off. The combination of dual OIS on both the primary camera and the telephoto, in addition to the digital image stabilizing trick, gives the phone a better chance to capture images at reduced noise and do it all better.

But how does Night mode on the new P30 Pro fare against my current favorite camera phone, the Pixel 3, and its Night Sight?

Well, to start, Google's low-light shooting mode, which captures several images at different exposures and pulls 'em together in an HDR- esque feat of magic, is much faster. It typically took half the time of the P30 Pro to capture an image. 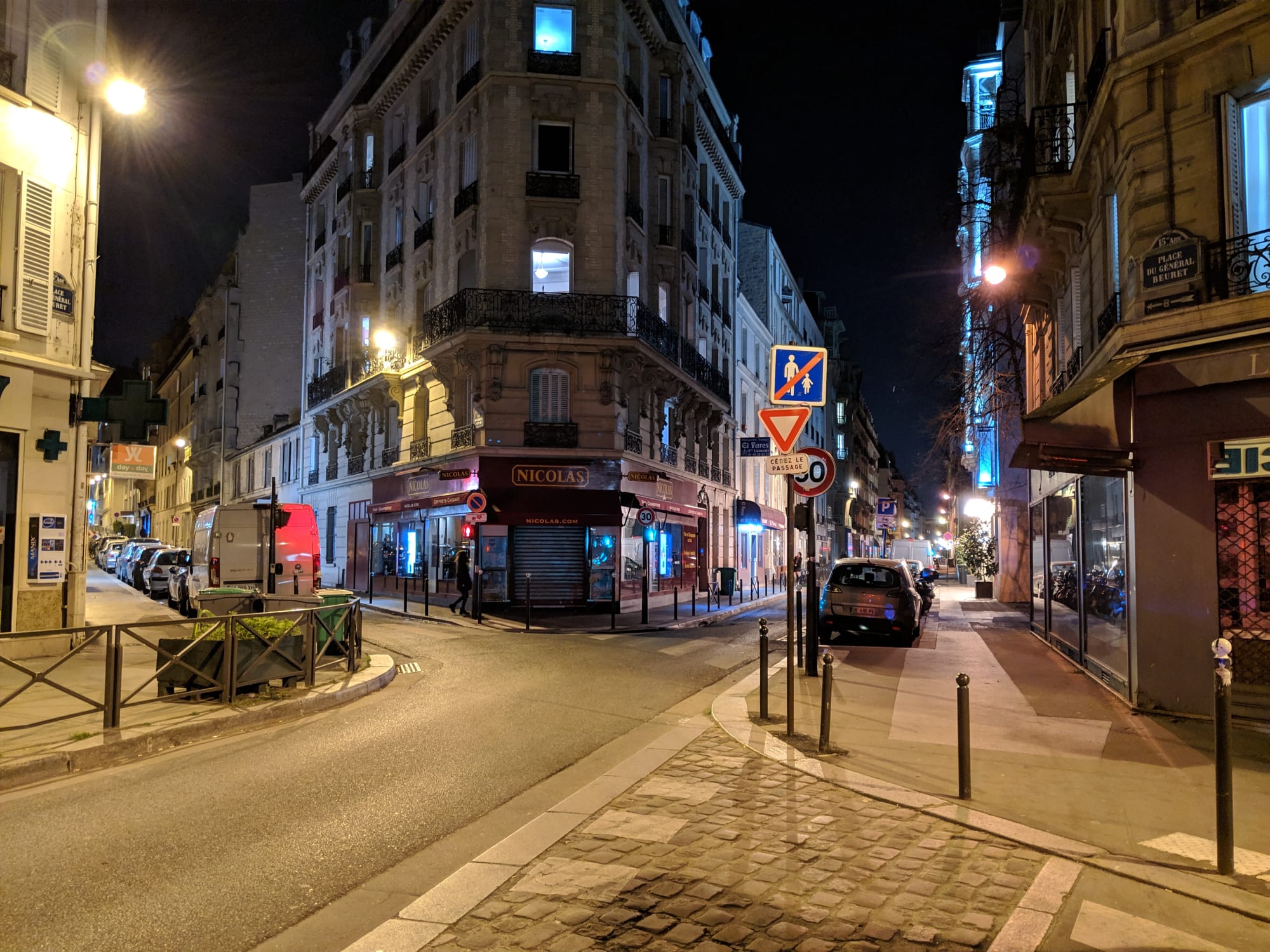 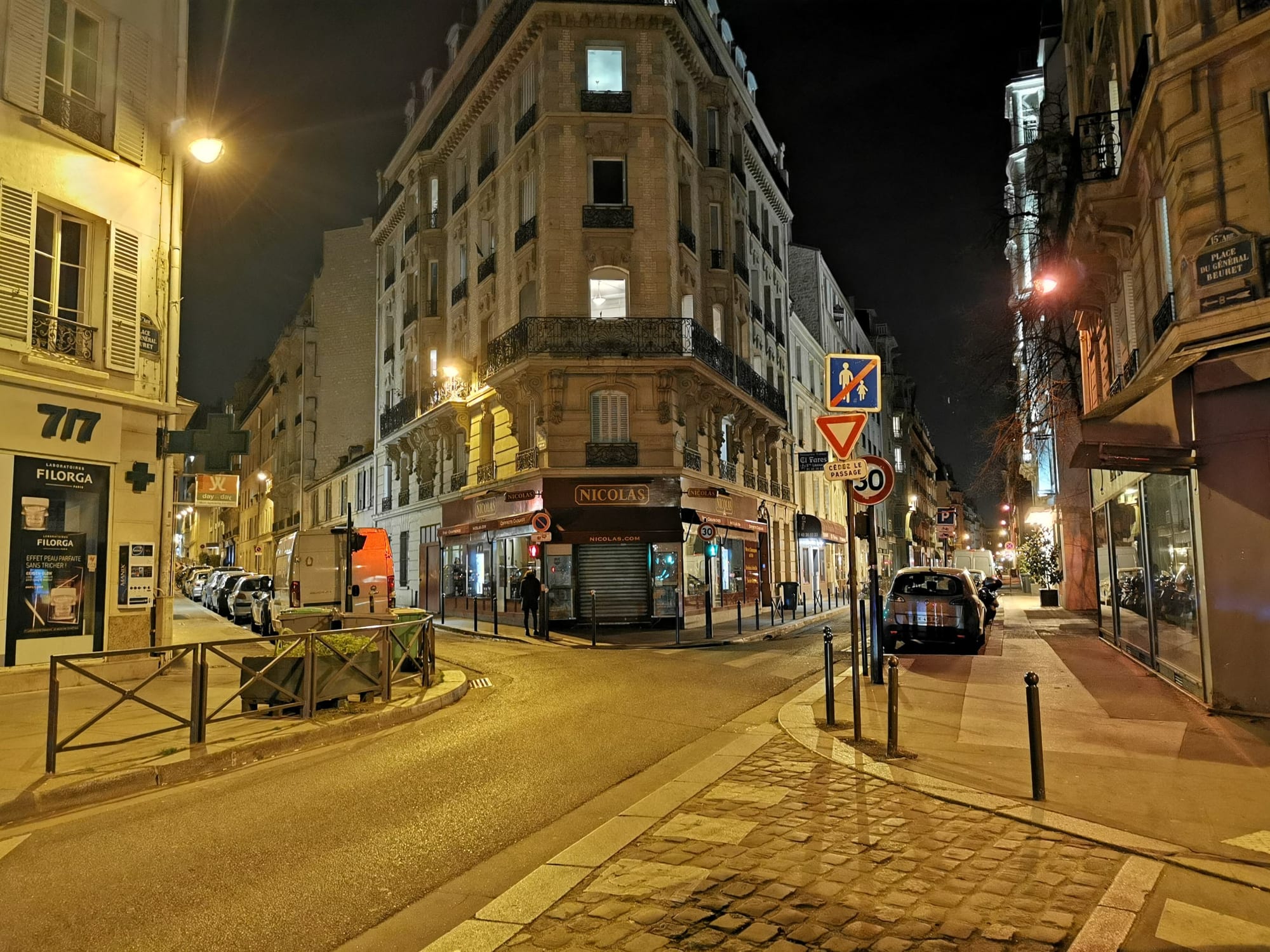 The results are a close call. The reality of how this street looked in real life was somewhere in the middle. The P30 Pro seemed to mute colors, or at least not compensate enough for the yellowish street lighting, while the Pixel 3 amped up the saturation a little too much. (You might prefer that result, it seemed more shareable, more artistic.)

Because of how both cameras crunch these low-light photos, the P30 Pro photo comes out at 10 megapixels , while the Pixel 3 produces a 12- megapixel image -- meaning Huawei's phone outputs an image at a lower resolution, with less detail. At this early stage, the Pixel 3 still clinches it, but it lacks the zooming capabilities of the P30 Pro. Look how I'm able to hone in on the Eiffel Tower, from roughly half a mile away, at night! Google's phone can't do this. Most cameras can't do this. 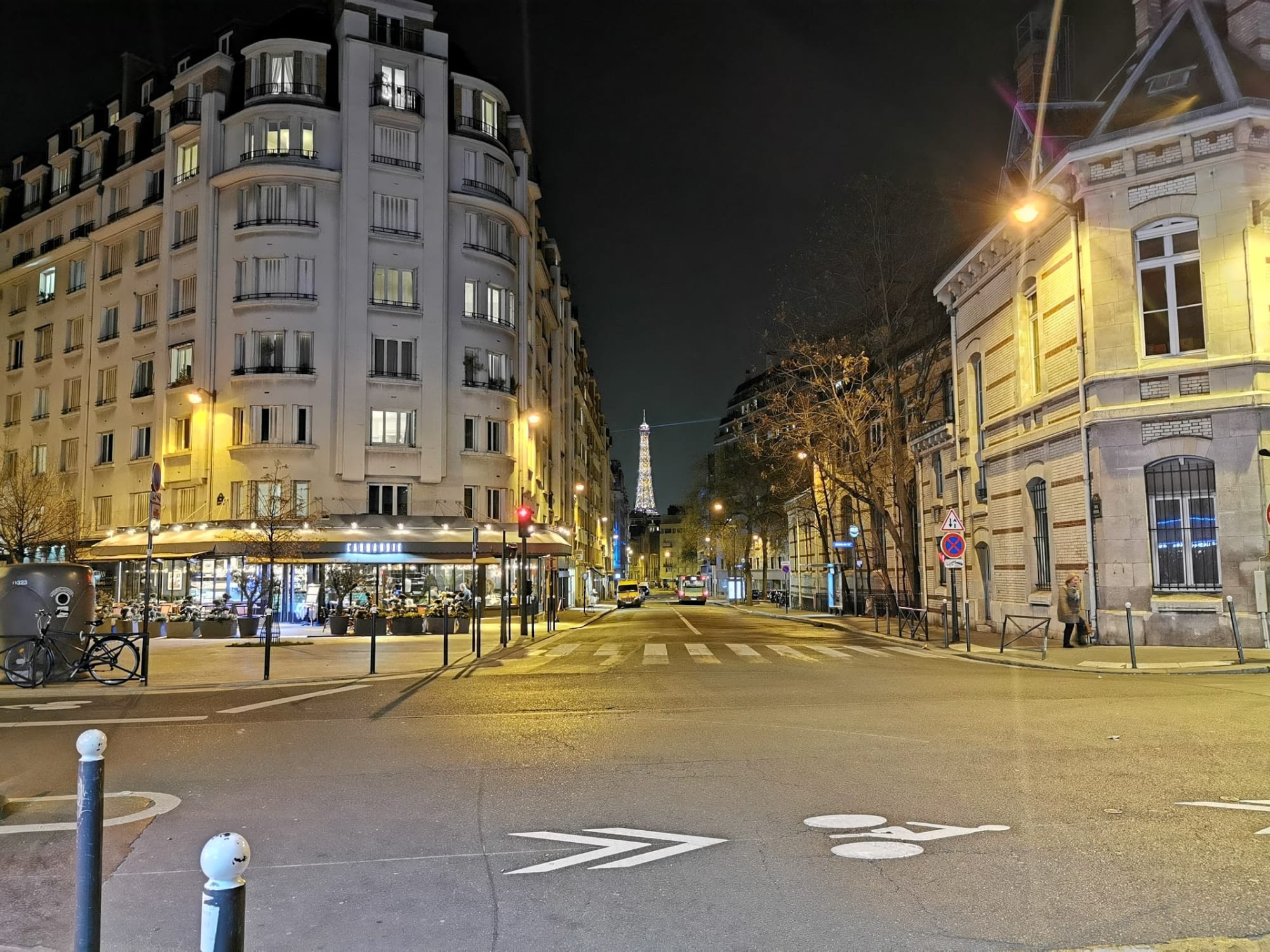 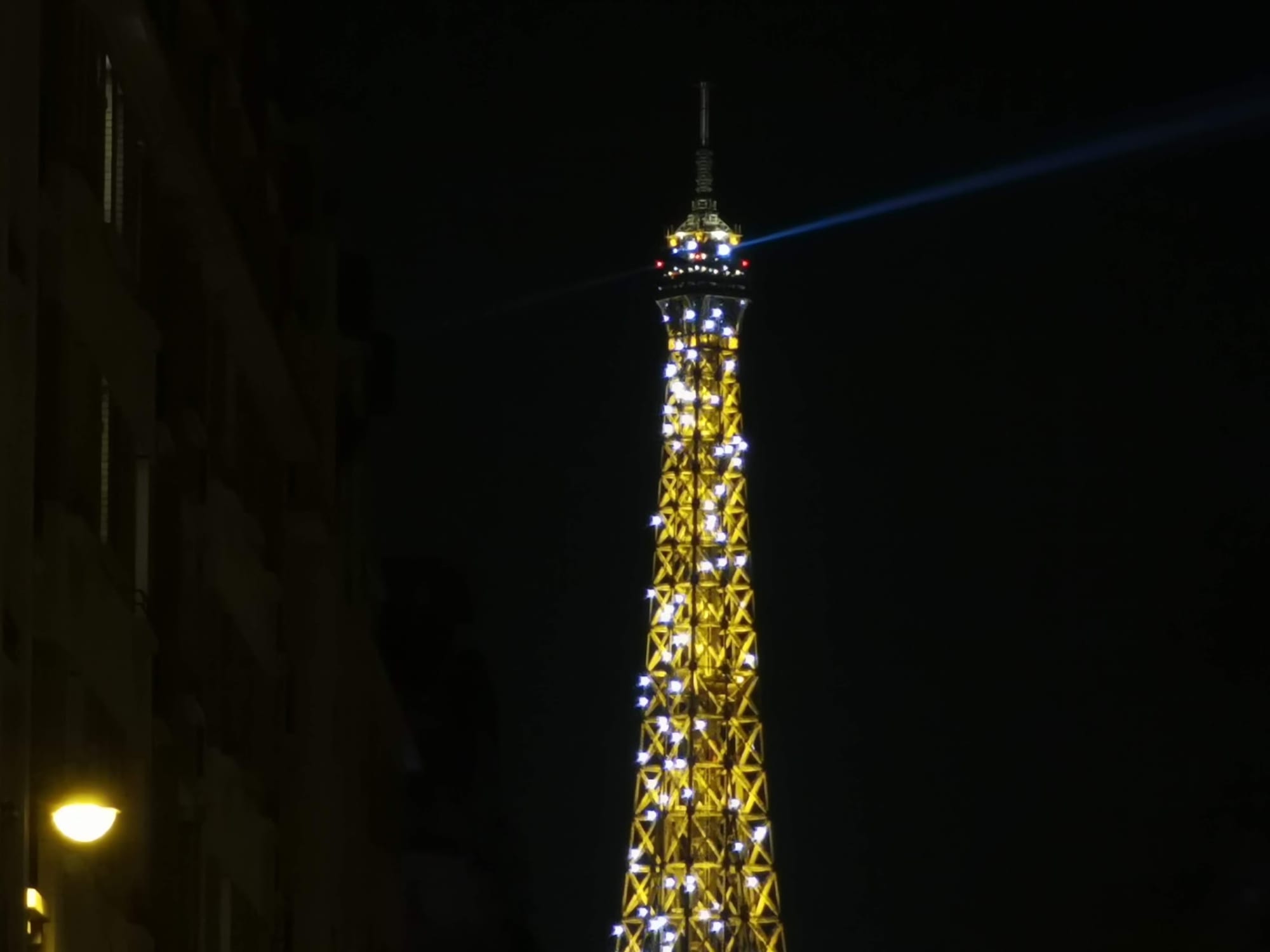 Combining two cameras with OIS and AI-assisted digital stabilization, the P30 Pro has even more chances to glean detail for video , too . That said, we had some performance issues with video in less favorable lighting. At night, while scenes appeared detailed and contrasty, things got a little jumpy, and all the image stabilization adds a jittery effect to the movie, which is not great to watch. Very bright subjects often leave a red neon halo on both video and images, something Huawei can hopefully tweak in software updates in the future .

Shoot video in the daytime, however, and it is rarely a problem. For a phone, the P30 Pro has some incredibly impressive focus tracking. On 10X hybrid zoom, the camera was able to keep pace with this scooter, dashing across a busy intersection, regardless of traffic interrupting the view. Face tracking also offered a way for the phone to keep things focused on subjects far away.

I have terrible selfie game. But here we are, and so I have to take selfies for the sake of my job. I might not like taking them, but I know what makes a bad one, duck-face aside.

Huawei has added some AI smarts to its selfie camera, which it calls Super HDR shot. That translates to pictures where, even if the background is very well lit, it will strike a balance between that and your face, ensuring it's nicely lit. It's a smart touch. And means less forced grimaces for the sake of a selfie.

While it doesn't really have anything to do with the camera, the P30 Pro has surprisingly beefy battery life. A day of intensive shooting brought the battery down to around 60 percent. It's something worth mentioning. 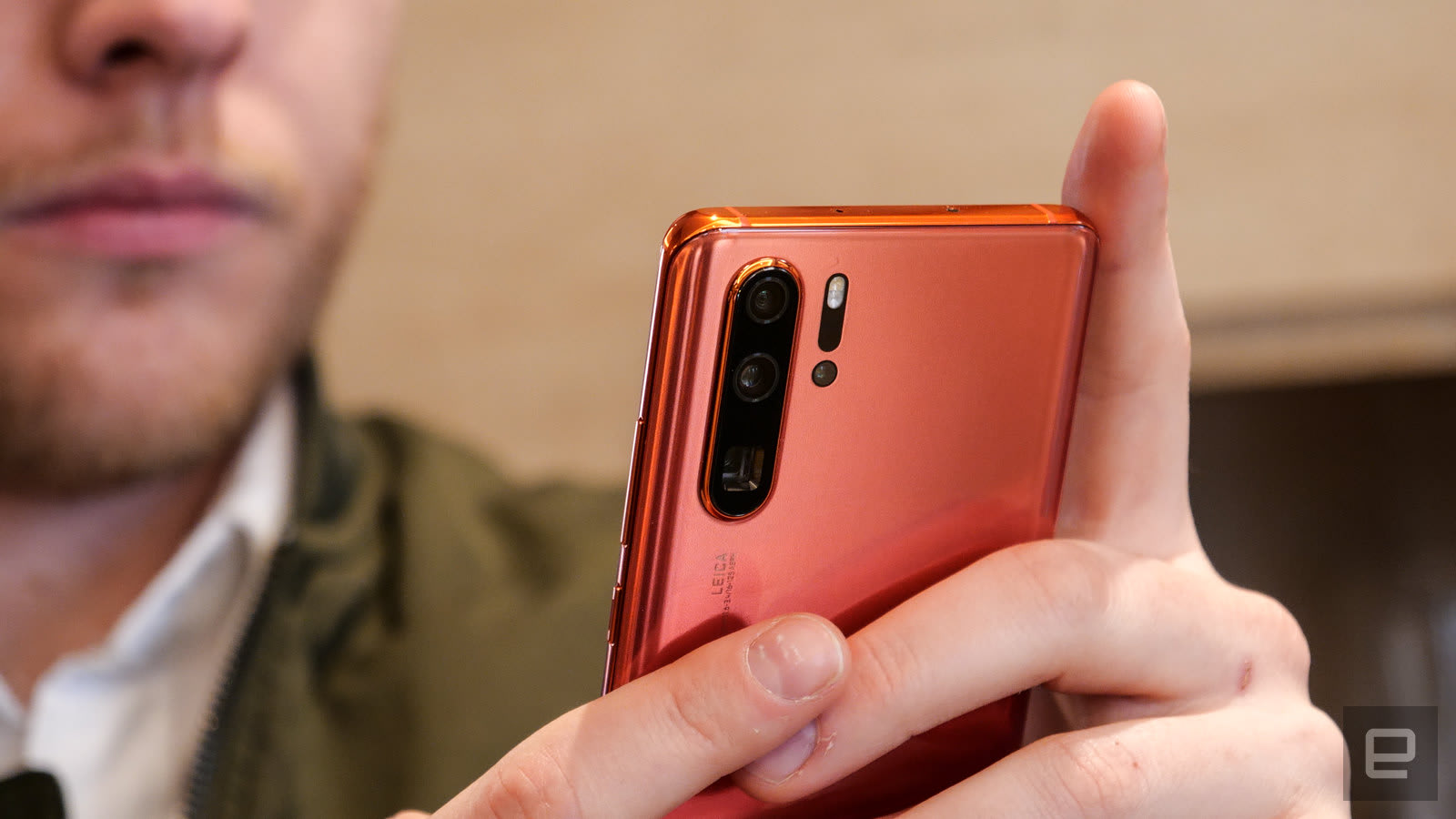 24 hours later, and I'm surprised to admit that the P30 Pro is another incredible camera phone that pushes mobile imaging further. I think it's a sign that even high-end compact cameras are going to be replaced by phones. My main takeaway was that Huawei has learned how to make its cameras a little easier to use (the Portrait mode is a great example of hardware and software working in tandem for simple, impressive photos). It's even easier to deliver great photos without having to read a manual or peruse a grid of photography options.

Huawei could have gone further, though. There are still a few UI hassles : The zoom control, with hard stops for 10X Hybrid zoom 5X optical zoom, standard mode and wide angle, is often hard to get to while shooting and is a little difficult to see on the screen. There are still a lot of shooting options hidden away on a mode screen, and the camera settings (given all those lenses interplaying with each other) menu is a complicated mess. Yes, you can shoot video in 4K, but be ready to dive into the menus.

Put in the effort, though -- and I know a lot of you are power users looking for the best camera phone, regardless of unwieldy menus or temperamental results -- and no smartphone camera comes close to what the P30 is capable of. In 2019, camera phones are making another leap forward, and it's a mix of class-leading hardware and smarter software. The P30 Pro's zoom features let you get close up for wildlife photography. Check the detail on this macro shot. Micro-bubbles inside the bubbles. Even in wide-angle mode, plenty of detail, if a little blurry if you zoom in. Note how the Portrait mode bokeh blurred both the arm and phone in the foreground, as well as the background.

A tour de force in night-time photography. You can even read the time on the clocktower .
All products recommended by Engadget are selected by our editorial team, independent of our parent company. Some of our stories include affiliate links. If you buy something through one of these links, we may earn an affiliate commission. All prices are correct at the time of publishing.
The Huawei P30 Pro’s cameras are miraculous
cameras
gear
hands-on
huawei
huawei p30 pro
mobile
p30
p30 pro
p30 pro camera
time of flight camera
video