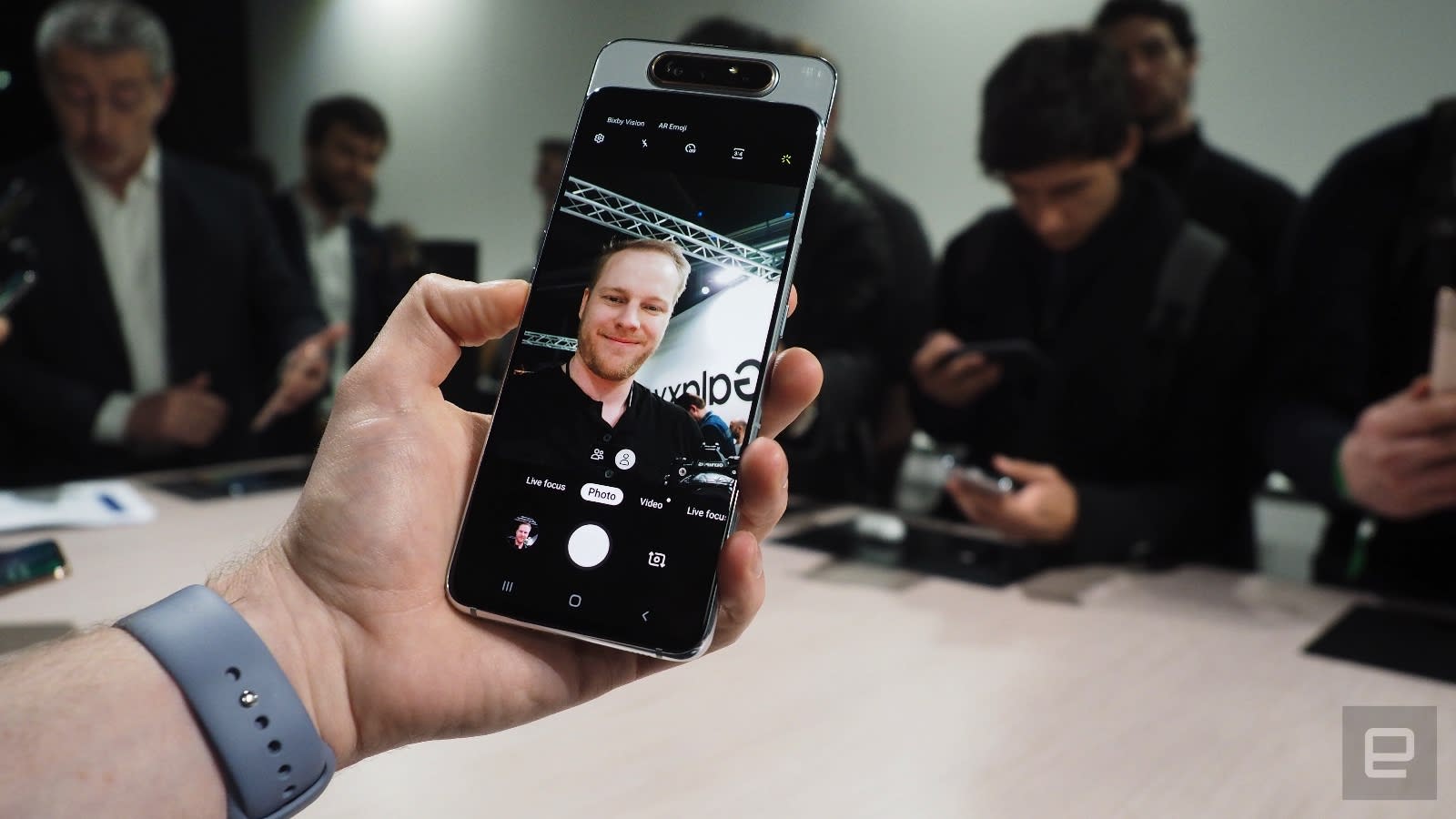 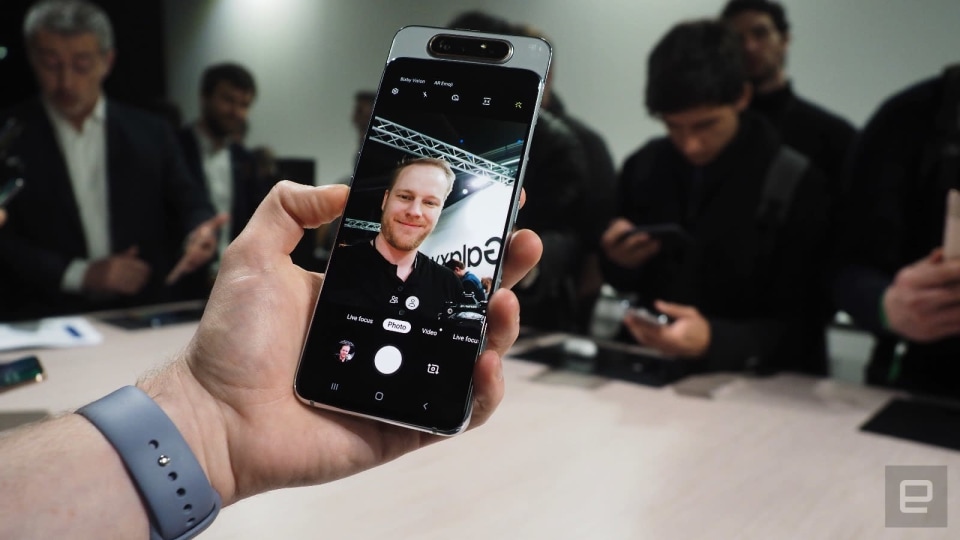 Samsung wants to bring the rotating camera phone back. And the Galaxy A80 is the phone that's going to do it. It has a huge 6.7-inch 1,080 x 2,400 AMOLED screen, but before we dig into all the other specs, let's get right into the most interesting point: that rotating triple camera, made for both primary shooting and your selfies. And thus, no notch.

It will launch in Europe, Asia and other territories on May 29th. It combines a 48-megapixel f/2.0 camera with an ultrawide (123-degree) 8-megapixel camera and a 3D depth sensor. Software-wise, that 3D Depth camera adds Live Focus videos, which scans what the cameras see for both measurement and depth -- expect cool bokeh effects for selfies and more traditional shots. Samsung says its new wide-angle lens has the same viewing angle as the human eye, too. I got to handle one earlier today, and the significant part here is that the wide-angle functions can now pull double shifts for both landscapes and crowded selfies.

So this rotating camera: It sounds like the solution for getting the best camera for any situation, and freeing up the screen to be the perfect rectangle, sans notches and punch holes.

It all happens once you're in the camera app. Press the on-screen button that typically switches between front- and rear-facing cameras and the back of the phone will extend. Tiny motors whirr, and this motion rotates the camera array as it moves, spinning the lenses and sensors around to face you. The phone is now roughly half an inch longer, with a recessed band on the back. It's slick. Very slick. But it does make even the P30 Pro seem reasonably sized.

I do have concerns about whether this mechanism can handle hundreds of rotations. Introducing a mechanical motion into a smartphone, with the constant threat of pocket fluff, grit and the rest, sounds like a recipe for trouble.

The mechanism got flustered if you manually tried to retract the phone down, instead of letting the A80 pull itself back, but this was early hands-on reveal day -- Samsung should have ample time to sort any teething issues before May 29th. I noticed that all that technology along the upper edge of the Galaxy A80 does make the phone a little top-heavy too -- be careful how you handle it.

For video, Samsung's "super steady" video mode reduces video shake, and AI-powered Scene Optimizer will be able to enhance up to 30 scenes. Oh, and a Flaw Detection feature that will pick up on glitches before you click apparently.

There's a 3,700mAh battery which puts it closer to the S10 series, and it packs 25W super-fast charging like the incoming S10 5G phone and its little brother, the A70. Samsung has also mentioned that the A80 will have an "Intelligent Battery" that adapts to your routines, modifying battery use to ensure the device makes it through your day.

Related but different, there's an "Intelligent performance enhancer" that will also optimize processor use, based on how you handle your phone. For example, if you're using the camera app and typically follow that up with an Instagram post, your A80 will learn these habits and gear up your social media apps once you've launched the camera app.

I'm intrigued to see whether you'd notice this feature in real life. Many smartphones in the past have touted these power-saving AI tricks, but it's been difficult to discern the benefit when you're using the phone. Rounding off the features, while there isn't any retina or facial detection, there is on-screen fingerprint biometric security.

The Galaxy A80 will launch globally in three colors: Angel Gold, Ghost White and Phantom Black. But there are no specifics just yet on US launch details.

In this article: a80, galaxy, galaxy a80, gear, mobile, salonedelmobile2019, samsung, samsung galaxy a80
All products recommended by Engadget are selected by our editorial team, independent of our parent company. Some of our stories include affiliate links. If you buy something through one of these links, we may earn an affiliate commission.