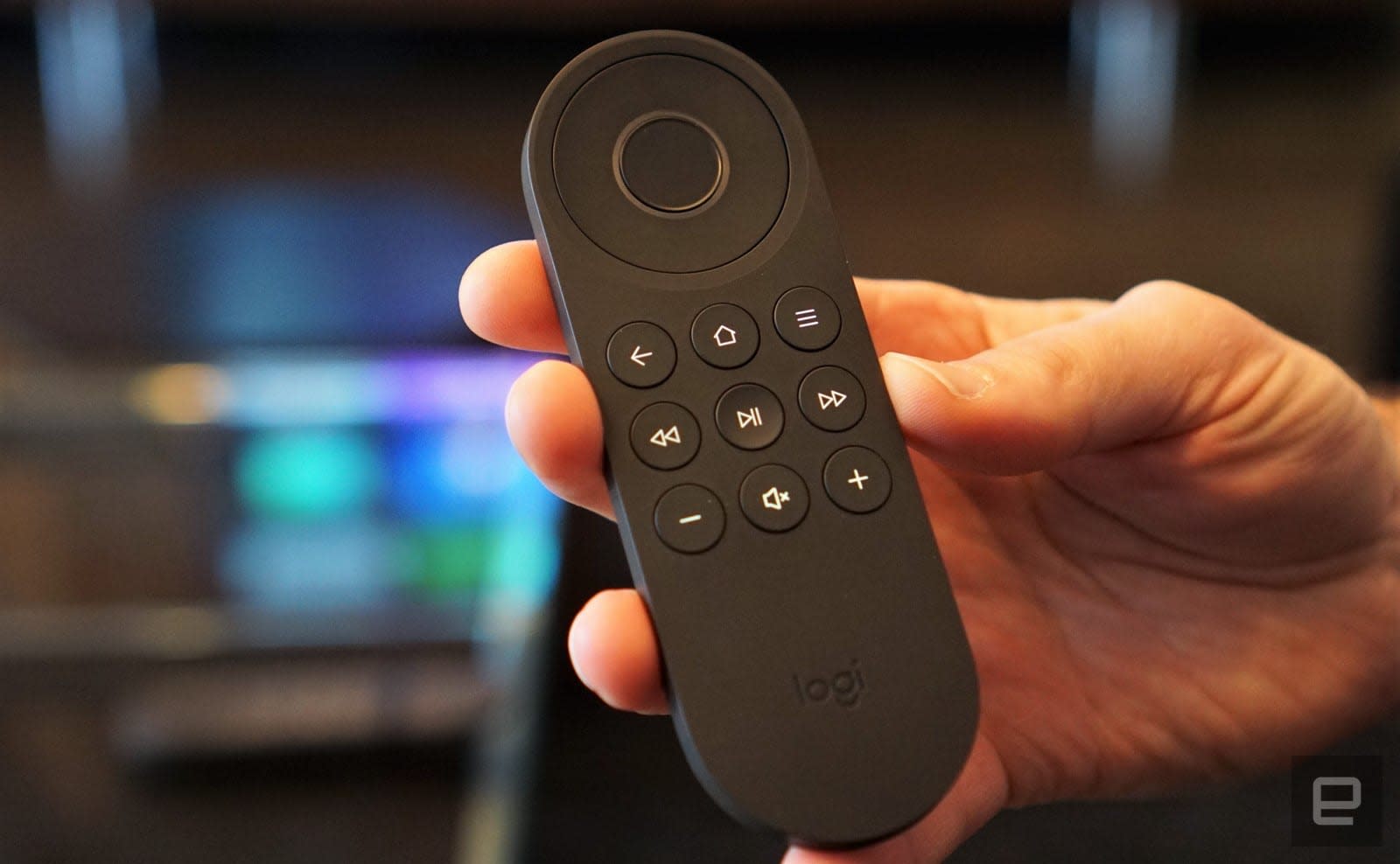 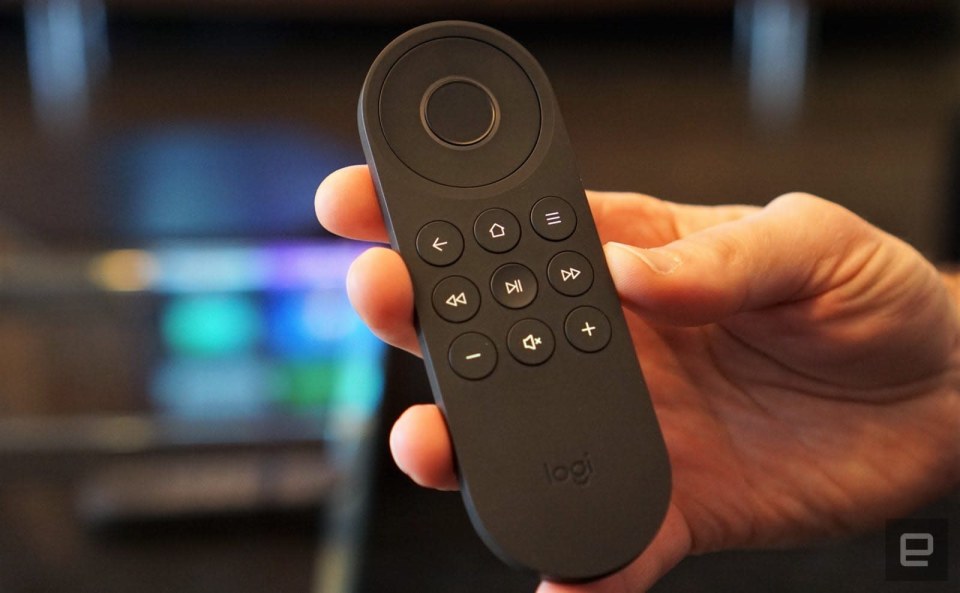 Logitech's popular Harmony universal remotes have long been the go-to solution for tech-savvy nerds who want to replace the bounty of ugly rectangles littering their coffee tables with a single, all-powerful option. But universal remotes are still pretty complex on their own, with dozens of buttons and, in some cases, LCD screens. You're basically swapping several remotes for something that looks like it belongs in one of NASA's Mission Control Centers. Now, there's something simpler: the Harmony Express, a compact universal remote that replaces a slew of buttons with Amazon Alexa voice controls. 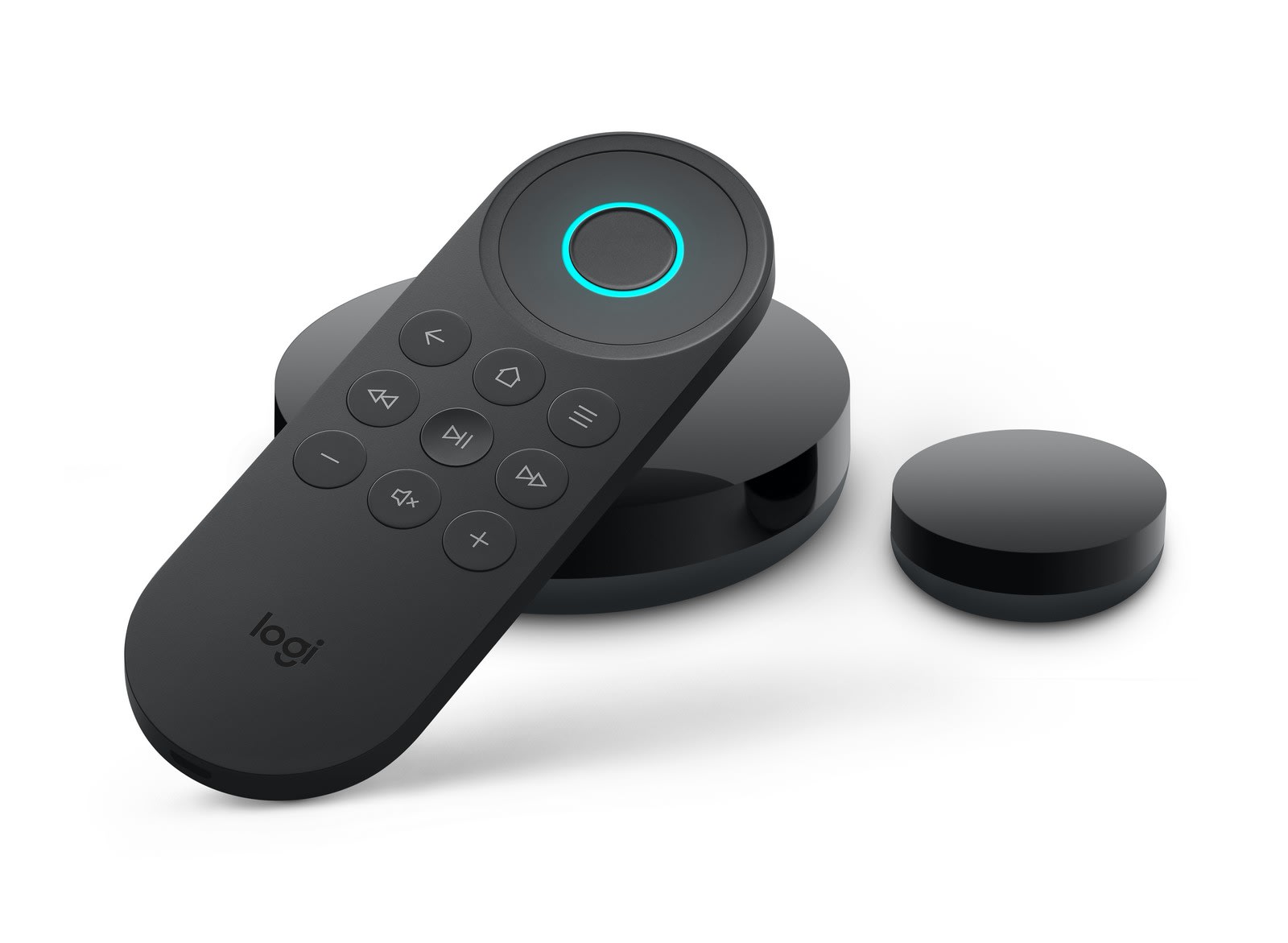 The $250 Express isn't meant to replace the Harmony Elite, which Logitech released back in 2015 and is still one of the best high-end universal remotes around. Instead, the company is aiming for consumers who want to reduce the clutter in their living rooms, but don't want to deal with another complex controller. And of course, it's also significantly more modern since it supports Alexa voice commands (the Elite doesn't even have a microphone). All you need to do is hit the voice button on the remote and say "Play Netflix," and your TV and home theater equipment will start up, head to the right inputs and launch the app.

Like the previous Harmony devices, the Express relies on an infra-red blaster base that sits underneath your TV and spits out control signals to nearby devices. There's also a smaller IR blaster that can sit elsewhere in your home theater to reach gadgets on other shelves. A companion app guides you through the setup process, which involves plugging in your TV and AV receiver models, and confirming other devices in your setup. It automatically detected the Apple TV 4K, PlayStation 4 Pro, Xbox One X, and Denon receiver in my living room, but I had to manually add my Nintendo Switch through a drop down menu. 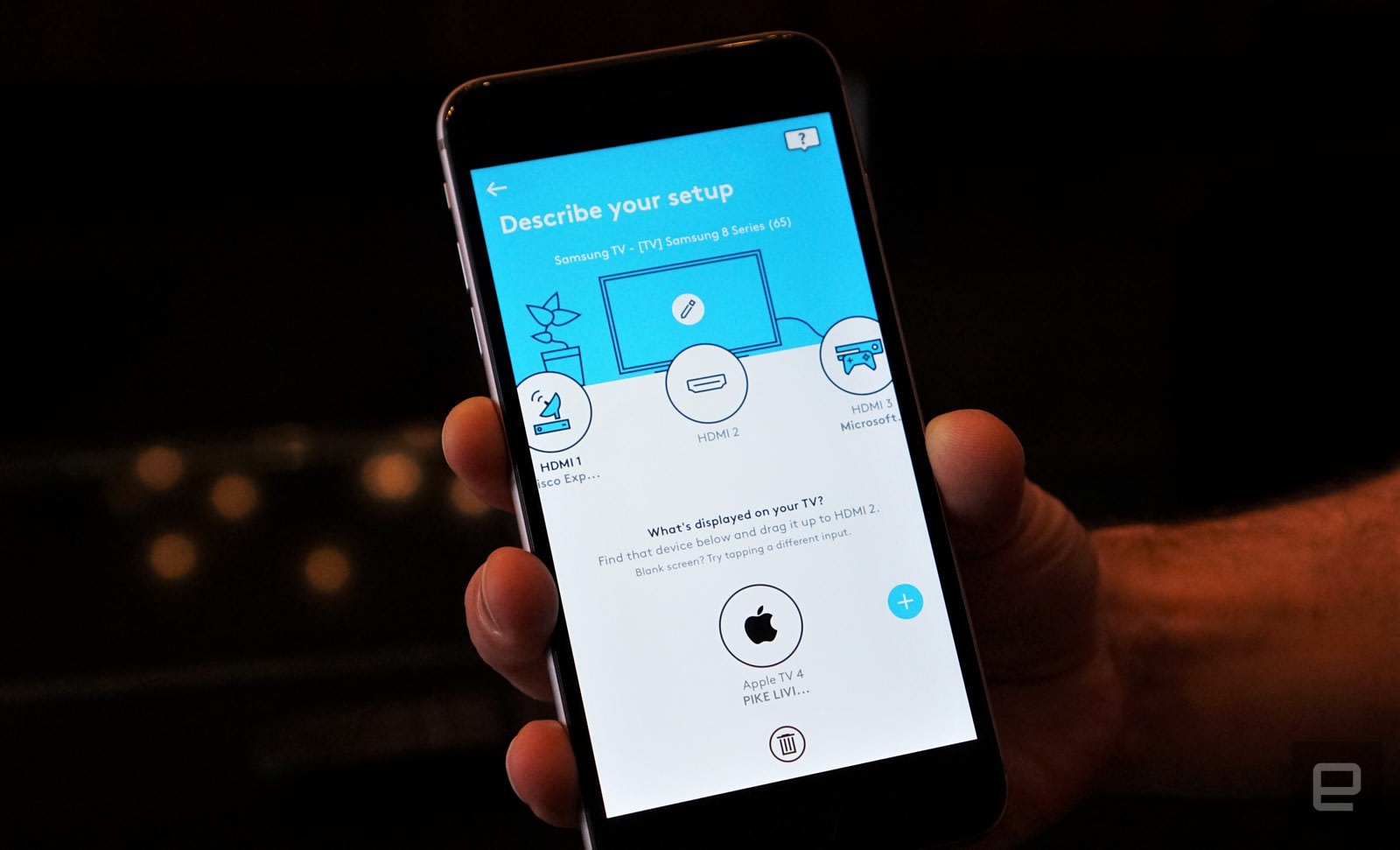 After that, I used the app to place my receiver under the right TV HDMI input, and then dragged the rest of my devices under my receiver's HDMI connections. The entire setup process took around 10 minutes, but it was relatively painless. After connecting the Harmony Express to my Alexa account, I held down the voice button on the remote, said "Turn on Xbox," and my TV and receiver automatically switched to their appropriate inputs. Saying "Play Hulu" switched everything over to my Apple TV 4K and automatically launched the streaming service app.

Here's a brief look at the Harmony Express in action pic.twitter.com/4qm59fVdTp

At first, the Harmony Express felt like everything I'd ever wanted in a modern universal remote, my entire entertainment system at my beck and call. But it wasn't too long before I noticed limitations: It can only launch apps, it can't play a specific movie or TV show. And it's not compatible with any of the Apple TV or Roku's voice commands, which means it can't take advantage of either boxes' voice search. Basically, you'll still need to keep your Apple and Roku remotes around. Logitech says it's working on getting deeper integration with those platforms, but it's unclear when, or if, that will happen.

As a standard remote, the Harmony Express feels comfortable to hold, with a rounded bottom half and smooth plastic finish. It's thicker and chunkier than the Apple TV remote, which means you're less likely to lose it in the couch, but it's also slimmer than Roku's bulbous controller. A circular ring on the top serves as your directional pad, while the center holds your standard "OK" button. Hold that down, and blue LEDs light up, telling you it's ready for voice commands.

The remote has only nine other buttons -- a breath of fresh air when compared to Logitech's previous controllers. On top of the expected volume and playback controls, there are back, home and menu buttons. A few also do double duty, a long press on the mute button turns off everything, while holding down Menu opens up options on some devices. There's a speaker on the back for Alexa's responses, which can get surprisingly loud (you control its volume through the app). Finally, a micro-USB port on the bottom lets you recharge the remote.

The Harmony Express is a serviceable remote for navigating the Apple TV's menus, my LG TV's options, or the Xbox One X's interface. But since it's relying on IR to control everything, there's a slight delay between hitting a button on the remote and the on-screen response. Apple and Roku's remotes are wirelessly connected to their set-top boxes directly, so they'll always be faster. Simply put, the main reason you'd want a Harmony Express is for simple voice controls. That being said, it's also a tempting option for anyone already relying on Alexa. The Express has all of the power of Amazon's virtual assistant behind it, so you can just as easily control the smart devices in your home as you can change streaming apps. The Alexa integration also works in reverse -- you can shout the same commands to an Echo in your home to control your TV setup. But it's worth noting that's something the Harmony Elite can already do with its Alexa skills, even though it doesn't have a microphone of its own.

I'll need to spend more time with the Harmony Express before I can fully judge it, but for now it seems like an intriguing step forward for Logitech. Unfortunately, it's held back by limited integration with Apple and Roku's set-top boxes, something we might never end up seeing, as well as the surprisingly high $250 price. At this point, the Harmony Express seems best suited for Amazon Alexa addicts who've dreamed of controlling TVs with their voices.

In this article: Alexa, av, entertainment, gadgetry, gadgets, gear, Harmony Express, Logitech, universal remotes
All products recommended by Engadget are selected by our editorial team, independent of our parent company. Some of our stories include affiliate links. If you buy something through one of these links, we may earn an affiliate commission.