It's not exactly thrilling, but it doesn't really need to be.

If you're in the US and mulling a new car purchase, there's a pretty strong chance you're considering an SUV. Fair enough: Americans are pretty much over sedans at this point. In any case, Toyota has a refreshed version of its popular Highlander that might be right up your alley, but after a few moments ogling it at the New York Auto Show, one thing is clear: it's not happy to see you.

Seriously, look at the scowl on this thing. Toyota has gone on this morning about the new Highlander's sleeker, more angular lines, but the company has so far remained suspiciously quiet about the SUV's pained grimace. While its new look gives the Highlander a more aggressive stance, don't be fooled: the name of the game here is (as usual) practicality. 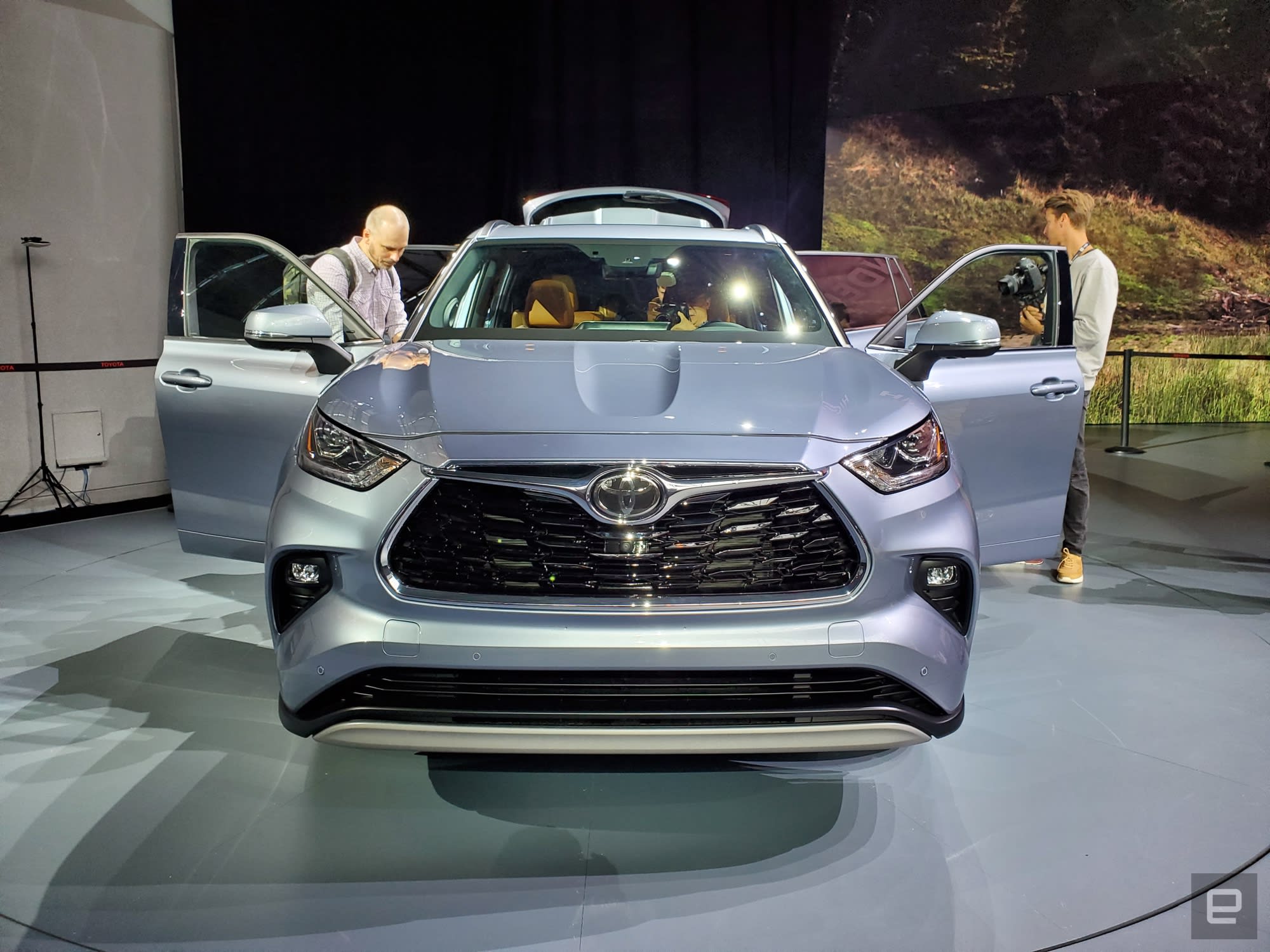 That's especially true of the Highlander Hybrid, which -- in addition to packing between seven and eight people into three rows -- is rated for a surprising 34 miles per gallon. That's a notable lift over last year's model, which you could typically count on for about 26MPG. Expect a decent selection of horses here, too -- the Highlander Hybrid produces around 240HP, which isn't too shabby for a 2.5-liter, 4-cylinder engine coupled with a pair of electric motors.

If hybrids aren't quite your thing, though, there's always the more standard Highlander, with its 3.5-liter Dual VVT-i V6 engine. It'll definitely give you a little more oomph off the line, but the extra power on demand will come in especially handy if you need to haul around a camper or something. (Then again, you might not be dragging too many campers around when this starts rolling into dealerships this winter.)

The push for practicality doesn't end there, either. The new Highlander is only about two inches longer than the model it replaces, but there's noticeable more storage space available when all three seating rows are locked into place -- think 16.1 cubic feet, up from around 13 in last year's model. You'll be able to get both the gas and hybrid models with all-wheel drive if that's your speed, and all versions of the updated SUV come also with support for Android Auto, Apple CarPlay and Amazon's Alexa.

Of course, there's a little room to make the Highlander a little more absurd. Assuming you're willing to shell out for the Platinum trim level, you can nab a Highlander with the Toyota's first 12.3-inch touch screen display right next to the dash. Is it really necessary? Probably not, but it's a nice little (alright, not-so-little) flourish for the poor soul tasked with ferrying around three rows worth of people.

All told, the 2020 Highlander packs little in the way of thrills, but really -- anyone expecting an exciting Highlander was hoping against hope. What we did get, however, is a perfectly sensible machine with practical upgrades in just about all the right places.

All products recommended by Engadget are selected by our editorial team, independent of our parent company. Some of our stories include affiliate links. If you buy something through one of these links, we may earn an affiliate commission. All prices are correct at the time of publishing.
Toyota's 2020 Highlander approaches the pinnacle of SUV practicality
gear
highlander
new york auto show
New York Auto Show 2019
suv
toyota
toyota highlander
transportation