The Futurecraft Loop features all reusable materials and no glue.
E. Alvarez|04.17.19
@abcdedgar

As part of its recent pledge to only use recycled plastics by 2024, Adidas has revealed a new running shoe that is made from 100 percent recyclable materials. The Futurecraft Loop was designed using nothing but thermoplastic polyurethane (TPU), a plastic material that dons the entire sneaker, including the tongue, laces, upper and the midsole with Boost cushioning technology. Adidas says it has been working on this project for the past six years, and the goal with it is to do its part in generating less plastic waste.

Simply put, the company wanted to make a shoe you can repurpose time and time again, and Futurecraft Loop is only the start of that sustainability effort. Adidas says that, by enabling a manufacturing model where raw materials from one shoe can be used to make another, it intends to take responsibility for the entire life of a product. That's why it had to think about not using any glue to put together the Futurecraft Loop, which is what allows the materials to be recycled for a completely new pair of shoes, in addition to water bottles, tote bags and more. 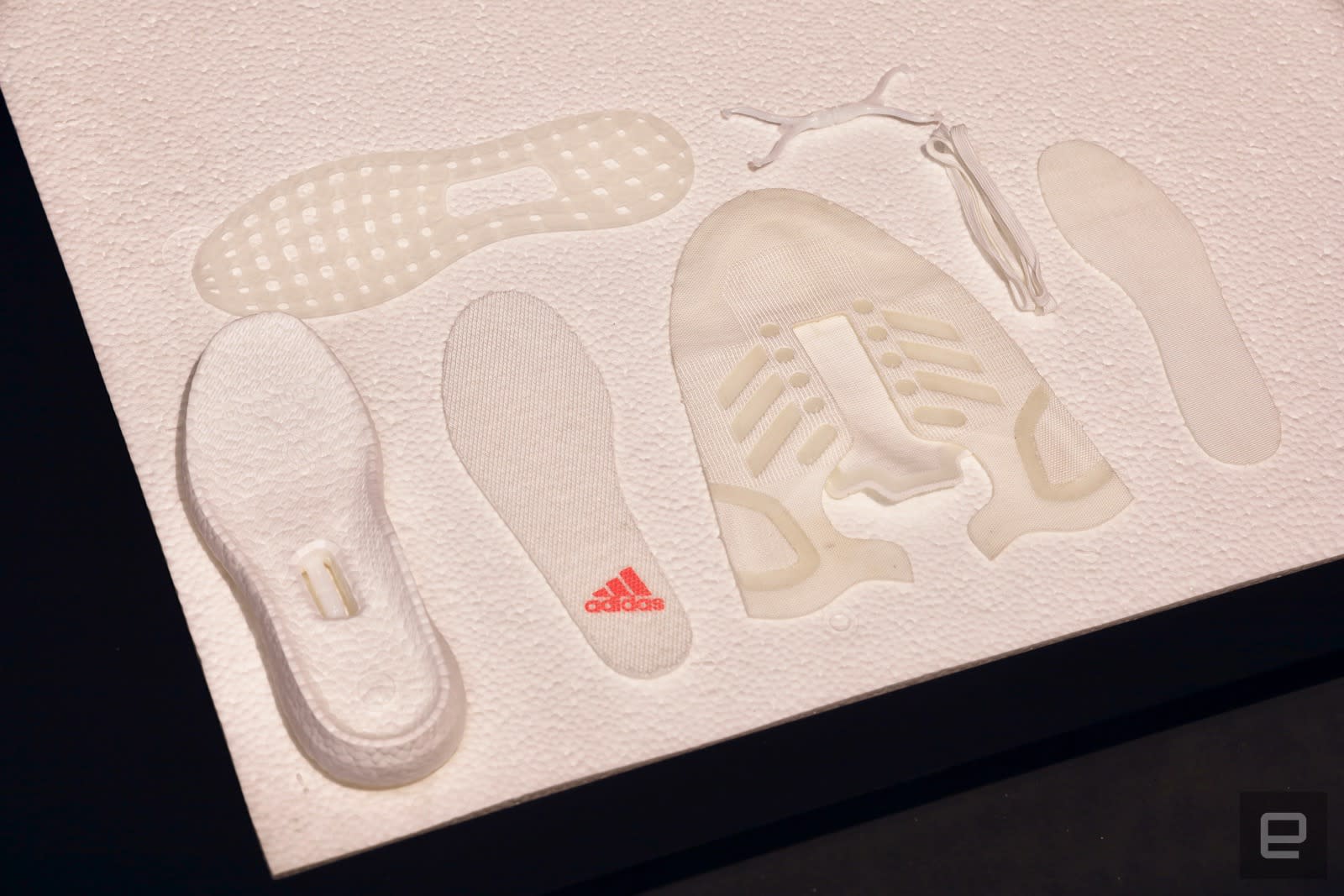 Speaking of which, while the different parts of Futurecraft Loop were made in China, the sneakers were actually assembled at Adidas' robot-staffed Speedfactory in Atlanta. Adidas says it took decades of research to develop a manufacturing process that could assemble a shoe that's essentially a solid piece of plastic without using glue, yet at the same time do it without compromising on performance. After all, the Futurecraft Loop is designed to be a running sneaker. The company claims it tested the Loop with people who ran up to 400 kilometers (about 250 miles), and the pair seemed to hold up well.

Of course, Futurecraft Loop is part of the German sportswear giant's vision for sustainability, which is playing a key role in its overall business. In 2016, Adidas teamed up with Parley to make a shoe out of recycled ocean plastic, and in 2019 that partnership is expected to produce 11 million pairs. The company is also partnering with a startup in Europe that, in the coming months, will let people use an app to trade in their old Adidas shoes for cash. Adidas then plans to recycle some of the materials from pairs it gets from the pilot.

"Taking plastic waste out of the system is the first step, but we can't stop there," said Eric Liedtke, Executive Board Member at Adidas, responsible for Global Brands. "The next step is to end the concept of
'waste' entirely. Our dream is that you can keep wearing the same shoes over and over again."

This particular version of Future Loop will be limited to 200 pairs, which will be given away to a select group of runners, who will then be asked to provide feedback ahead of a wider release in a couple years. Although I didn't get to try it on, the Futurecraft Loop felt like any other running sneaker, albeit it was a bit on the heavy side due to its thicker plastic materials. Still, if you've ever tried on a pair of Adidas' Boost shoes, you know they tend to be quite comfortable and durable, so I'd expect that to be the case with the Futurecraft Loops, as well.

Unfortunately, to get a pair of these you'll have to wait until spring of 2021, which is when the second-generation of the Futurecraft Loop is expected to launch to the public.