The next frontier for cannabis vapes: mood-specific formulas

Your next oil cartridge might promise more than welding you to the couch.

"In New York, my bicycle messenger really had two types of cannabis. It was either green or brown." Michael Ray is the CEO of Bloom Farms, a California-based cannabis company that specializes in vape cartridges and CBD tinctures. Ray's reflecting on cannabis's current cultural explosion. As an increasing number of states fully legalize it, alongside countries like Canada, the curtain of illegitimacy is slowly lifting. For the first time, cannabis can be explored and experimented with in plain sight. The result: an emerging trend of tailored and targeted vape products that claim to do more than get you lifted. Cannabis is going a la carte.

As with any form of prohibition, once the floodgates open, there's an inevitable wave of over-indulgence. For the last few years, we've seen the emergence of increasingly strong oils and concentrates. But as the party smoke clears, that's changing. People are exploring various cocktails and new compounds with the goal of dialing in the effects to achieve exact moods and experiences. This might be as vague as "party," tempting as "soothe" or as specific as inducing lucid dreams. The problem is, we're probably still years (or decades) away from being able to make such claims with any degree of confidence. At least in a way that would be worthy of the FDA's rubber stamp. 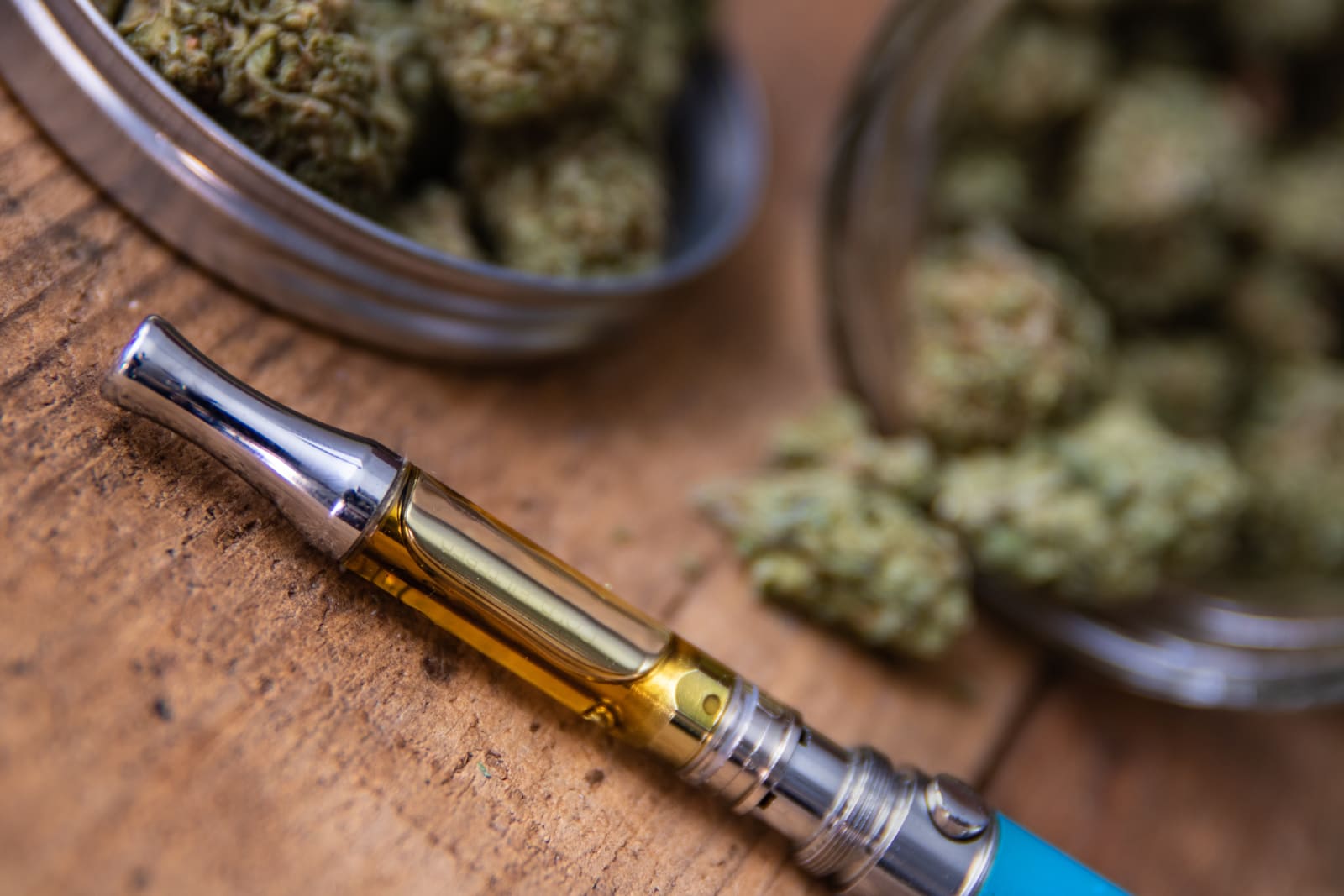 Cannabis is a complex plant, that much we know. "So there are about 140 maybe a few more hydro cannabinoids or plant-derived cannabinoids. THC and CBD being the two best studied, but there's at least another 130 more," says Piomelli, a professor at the University of California Irvine and co-chair of its Center for the Study of Cannabis, in an interview with Engadget.

That is a lot of compounds in one plant that we don't know much about. But that doesn't stop people from trying. Strains that are high in the other 130 or so cannabinoids aren't common, but expect that to change in the future. In the meantime, cannabis companies are experimenting in three main ways: THC-to-CBD ratio, with terpenes and other elements already in the plant, and with additional, non-cannabis additives.

Manipulating cannabis is nothing new. For decades plants have been bred like dogs to enhance their potency and effect. Anyone who's watched Narcos: Mexico will know that even the famous "sensimilla" (essentially a "seedless" cannabis plant) is a byproduct of human botanical intervention.

THC is, without a doubt, the star of the cannabis show. It's what switched humankind on to the plant in the first place. Its effects are unmistakable and, for the most part, pleasurable. CBD is the next best-known cannabinoid and one that's currently exploding into the mainstream thanks, in part, to the recent Farm Bill. It's the balance of these two compounds together that gave the first hint that the effects of cannabis can be customized. 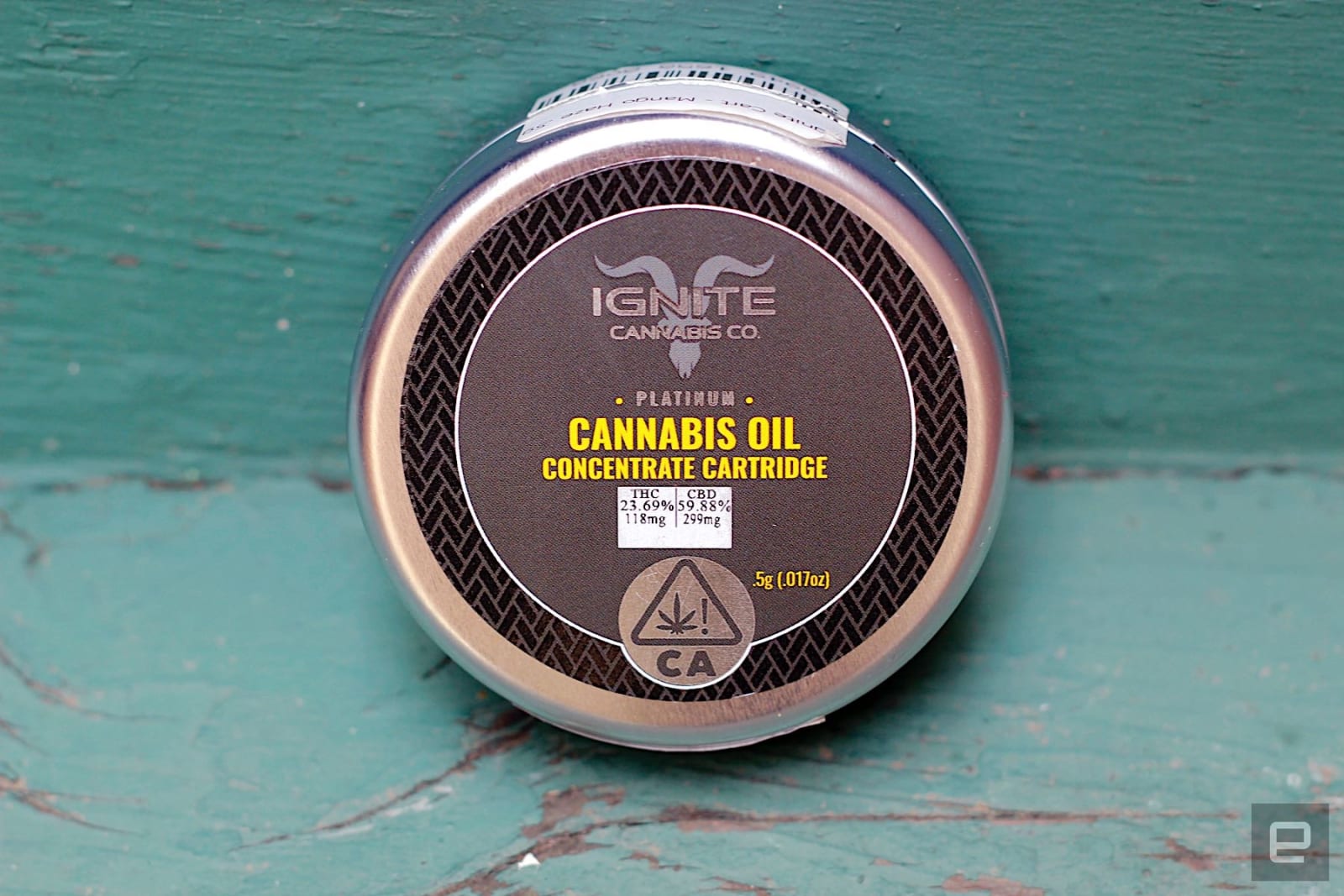 "If you mix THC with something else it will affect the actions of THC," explained Piomelli. "CBD has some modulatory property on what THC does. And therefore, people are talking about the entourage effect." This entourage effect is the reason why you will see percentages or ratios of THC and CBD on the packaging for your vape cartridge. THC is, famously, the part that gets you high, whereas CBD's effects are less concrete. Usually, they are associated with calmness, reducing anxiety or priming you for sleep (among many others). The problem is, almost nothing is known about what different ratios might actually achieve, scientifically speaking. Not least because everybody reacts differently.

According to Ray, experimentation is your best bet. "I think one of the challenges in cannabis and CBD is tuning in your own personal formula," he says. "People still need to be walked through this until they're able to find what works best for them." Luckily, there are plenty of products in a wide variety of ratios and dosages for those who do feel like experimenting.

Ask any beer connoisseur to describe their favorite IPA, and you'll almost certainly hear them talk about hops. In the world of weed, it's terpenes that give your hit its flavor and character. Some think terpenes are also another way we can dial in our experience (in combination with the cannabinoid ratio).

California-based firm Dosist has six cannabis pens to choose from. Each "formula" is labeled with its primary effect (Arouse, Calm, Bliss and so on). Dosist's vaporizers are aimed at people looking for relief from pain or insomnia, rather than those looking to get baked. Along with a breakdown of the THC/CBD ratios and complete (hand-picked) terpene profiles, the pen will vibrate once you have inhaled what Dosist believes to be the optimum amount (hence the name). The company's guidelines suggest a maximum of three "doses" per hour, barely enough to alter your consciousness, but sufficient for the benefits -- according to the company at least. 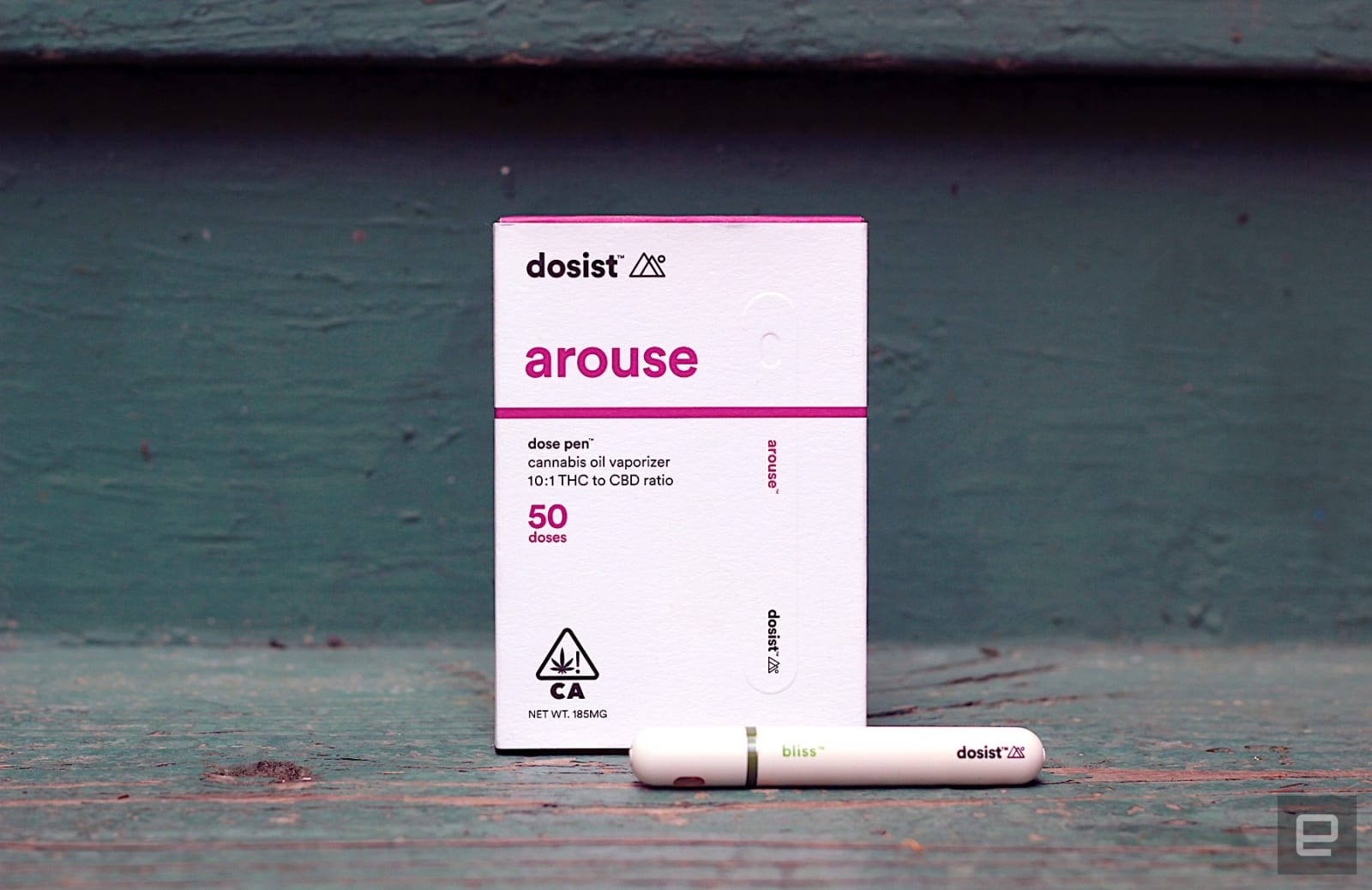 Terpenes are essential oils found in many plants (not just cannabis). They are characteristically strong in odor, and for most people it will be what defines much of the flavor of your cannabis vape. But some companies, like Dosist, believe they can impact the potency and direction of cannabis's effects.

Piomelli is more skeptical. "I would say 95 percent of the claims that are made are essentially unsubstantiated. Terpenes are compounds. They're biologically active compounds and there are some terpenes that are particularly active on the cannabinoid system," he says. "But proof that a combination of terpenes, so one specific terpene either enhances, or diminishes or in some other way modulate the effects of THC, CBD and other cannabinoids, the evidence is simply not there."

That doesn't mean that there's no merit to the idea, just that scientific proof is sparse. "I'm not the one for dismissing all anecdotal evidence, if the anecdotal evidence is made of thousands of people," Piomelli added. "There's a point where we have to wonder if there is so much smoke there must be some fire."

While cannabinoids and terpenes hold a lot of promise, some think that cannabis can do with a helping hand to get you where you want to go. White Fox Atmospheres is one of a growing number of brands that are adding other herbs to the mix. The company's own website defines its mission as "to formulate, alchemize and create specific effect driven medicine."

White Fox's vape products contain good old-fashioned cannabis, but with "Ayurvedic formulations" added in. Ayurvedic medicine is where things steer off even more into the unknown. The formulations are millennia old but also lack definitive scientific research into their medical efficacy. 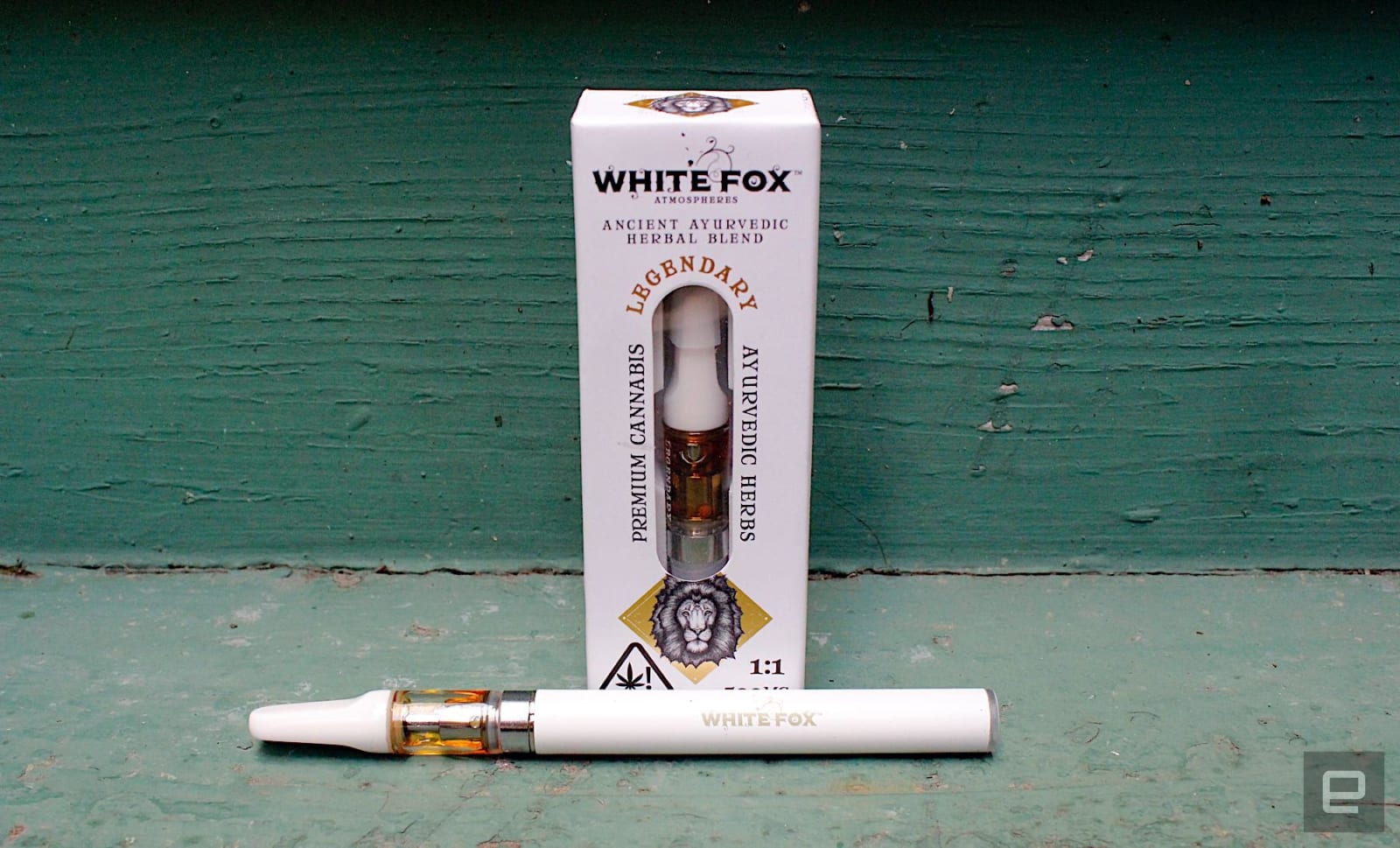 Scarlet Ravin, White Fox's founder and CEO, creates the line with the sole intention of making people feel better. Fed up with the arms race in cannabis, the zero-sum game of getting impossibly high, she tells Engadget she wants to answer the question "how do we get to use the medicine in a good way, where we aren't just getting super stoned and blowing our heads off?"

The result is three different cannabis vape formulas: one each for male and female "sexual energy" and another that promises to enhance your ability for lucid dreams. Ravin is aware that people might have certain expectations from a product called "Legendary," or something that contains valeriana wallichii root, but contends that, like most holistic remedies, the effect you receive might be more, well, holistic.

"So our formula kind of gets people back into that state of inner balance," she says, "and a lot of the people that do smoke the pens regularly, will state, 'I got it for pain to see if it would work and I feel like I'm back in my body and I feel like I'm in my heart when I smoke this pen.' So it's more about an allover state of wellness than 'you're gonna get a boner' kind of a vibe, you know?"

What about the research?

The quest for new, specific effects from cannabis isn't surprising. Piomelli explains cannabinoids have something called a "privileged structure." This means they are more likely to have a physiological effect or pharmacological effect.

Understanding ratios, terpenes and the interactions between cannabinoids is key to a customized-cannabis future. A future that might be some years away, according to Jacob Borodovsky, a researcher at the Department of Psychiatry, Washington University School of Medicine, who specializes in cannabis and opioid epidemiology. "I think we'll get to a place like that after you and I have been dead for a long time," he says. "I think that will happen through medicine first through neurobiology, and we'll start to understand these things a lot better."

Borodovsky is referring, in part, to the slow pace at which science can study such things. The number of studies needed is large -- far larger than the financial resources available to enable them. Cannabis is now a commercial venture, and patenting nature is hard. Piomelli concurs: "It's going to cost many millions of dollars because you need a large number of subjects, and you need your placebo controls, and is an expensive enterprise and no company is interested in doing this because how would they protect their property afterward."

Every once in a while, though, we do have enough evidence to turn a remedy into a medicine. Epidiolex is a CBD-based medicine that recently achieved FDA approval for the treatment of Dravet syndrome (a severe form of epilepsy in infants). 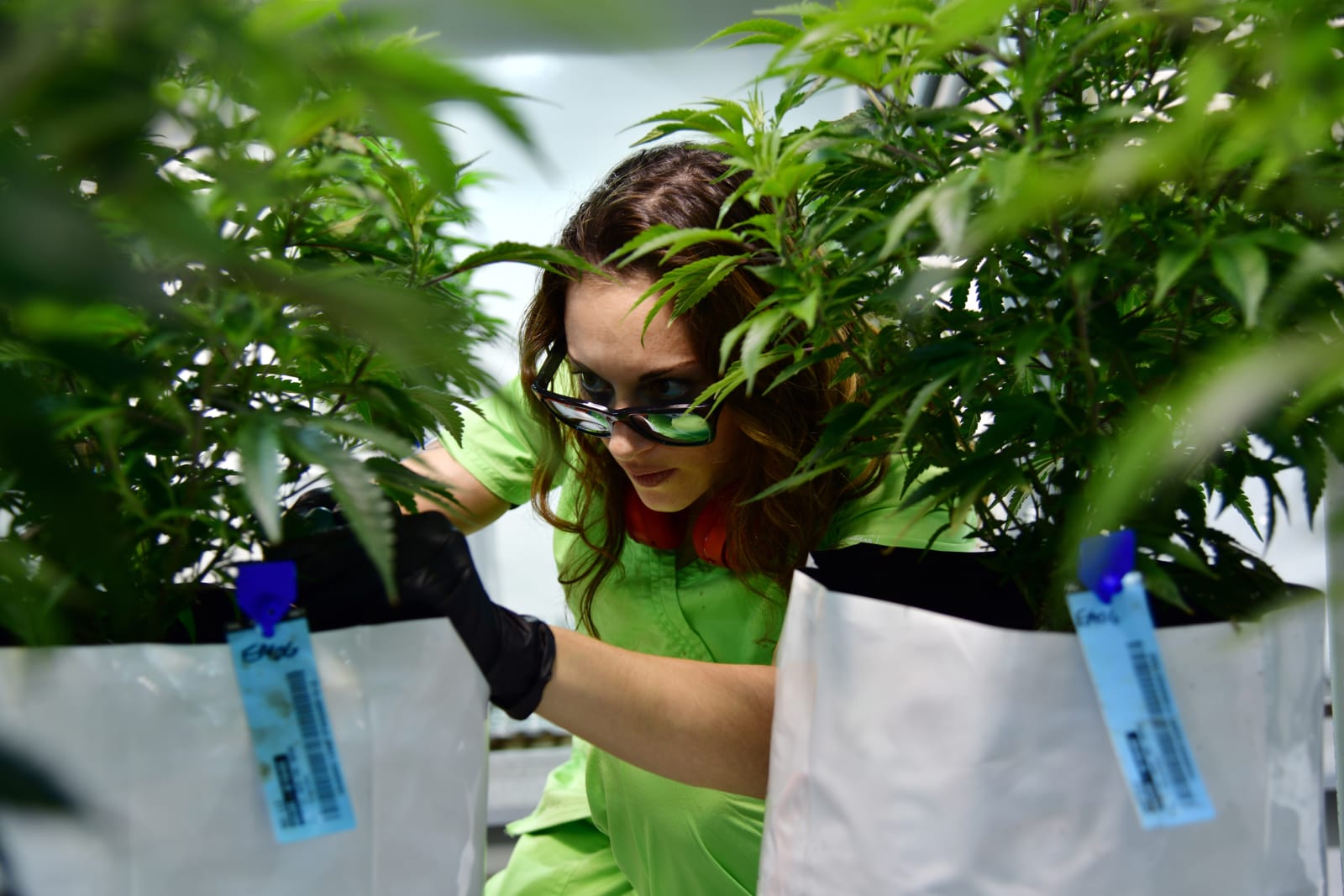 But why wait for science to catch up? Humans have been self-experimenting with all manner of substances for millennia. Bloom Farms' Ray takes a suitably measured approach with his products. "I've always been a believer that staying as true to the plant as possible is the best bet," he says, referring to the current wave of CBD products that are booming right now. Some are pure extract, while others like Bloom Farms' are "full spectrum" -- meaning they contain traces of other naturally occurring cannabinoids. The theory being, like your olive oil, the magic is in the plant, not just the desired compound.

Likewise, Ravin is confident she's onto something. "When I'm in a dispensary and I'm doing a demo day, I kind of feel like I'm a little ahead of my time of what we're offering," she says. "But it's just now starting to catch on where enough people have smoked it and say, 'I really like this. I can't exactly say why, but I like how I feel when I'm on it and I wanna keep feeling like that'"

The rush of new products doesn't look like it will slow down any time soon. Perhaps the most potent ingredient in cannabis development is legalization. With the fear of prosecution no longer looming, scientists can explore more freely and consumers can experiment with what works for them. Now, delivery services like Sava are offering education alongside these a-la-carte products (and will even bring it to your door) -- getting the buzz you want has never been easier.

Like your favorite vacation destination, or choice of coffee, your own personal endorsement is ultimately king. We all know which alcohol gets us a little emotional or takes the edge off a tough day at work. Even Piomelli concedes that if it works for you and isn't harmful, it's worth considering. "It's a personal thing," he says. "Personal taste. I don't drink white wine as it gives me a headache. I don't think that justifies a clinical trial."