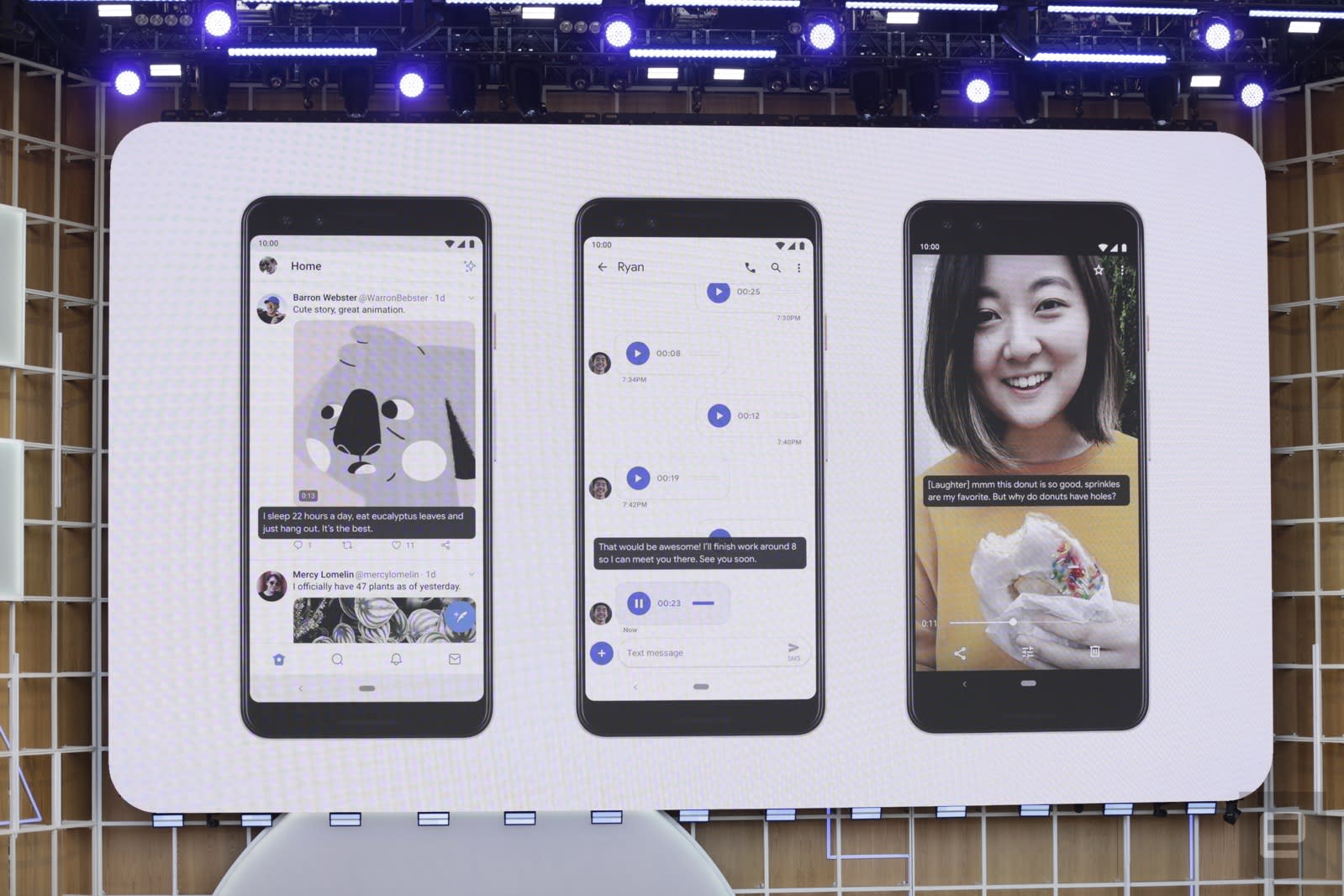 Google likes to drop plenty of surprises at its annual I/O developer event, but there's one thing we always know we'll hear about: the state of Android. Specifically, the next version of Android, currently only known as Q. As usual, Google released a developer-only beta back in March, and today senior director of Android Stephanie Cuthbertson was on stage going through more details about the forthcoming release.

The most obvious new feature is dark mode, which will be released system-wide in Android Q. It's accessible via a toggle switch in the quick settings area and it'll also be activated when you turn on battery saver mode. We just saw a quick screenshot of it, but it looks like it'll apply to any apps you're using regardless of whether they're Google-made or from other developers.

Another notable new feature is called Live Caption. If you're watching a video, Google's machine-learning algorithms can now add captions on the fly by just pressing the volume button and then a "live caption" button that'll show up on on the onscreen volume slider. From there, you can expand and contract the panel as you see fit, and move it up and down on the screen so it doesn't obscure your video. Google is also able to do all of this on-device, so it's more secure and also doesn't need a network connection.

The same on-device machine learning powers smart replies -- Gmail and Google's own messaging app have had those for a while now, but Android Q will let any messaging app suggest replies right in the notification area. Smart reply can also suggest other actions based on your notifications. If someone sends you an address, for example, it'll include an option to open right in Google Maps.

The first developer release of Android Q had a major focus on privacy, and Google expanded on that during today's event. All told, the company says that there are 50 new privacy and security settings in Android Q. Perhaps most notable are new location services settings that let you limit location tracking to only when the app is running. It'll also give you notifications to let users see when apps are using your location in the background. New settings also let you keep apps from accessing media on your phone and collecting information about your device like its IMEI and serial number.

A big part of last year's Android release were "digital wellbeing" features that were meant to help users cut back on phone usage a bit. This year, Google's adding a new "focus mode" to help shut down various distractions. It'll block most app alerts and notifications while allowing important contacts like your family members to reach you. There are also more tools for parents to manage their kids' phone time -- it'll let you review how they're using their phone from your own device, set daily time limits, review app requests and more.

Other user-facing features already announced include tweaks to the controversial gesture-based multitasking features that arrived last year on the Pixel 3 with Android 9 Pie. Google's also adding a new chat-focused interface called "bubbles" that lets users keep messaging conversations accessible regardless of what they're doing with the phone. It's not dissimilar to the "chat heads" Facebook has included in Messenger for Android for years now. Google's also adding more support for foldable displays to Android, as well, good news for the OEMs making foldable phones this year.

As for when Android Q will arrive, Google's not saying yet. But if history is any guide, we'll get a final desert-themed name and release date later in the summer. The Q beta 3 is available on 21 devices if you want to give it a shot, including all Pixel devices.

In this article: android, android q, dark mode, gear, google, googleio2019, mobile, security
All products recommended by Engadget are selected by our editorial team, independent of our parent company. Some of our stories include affiliate links. If you buy something through one of these links, we may earn an affiliate commission.