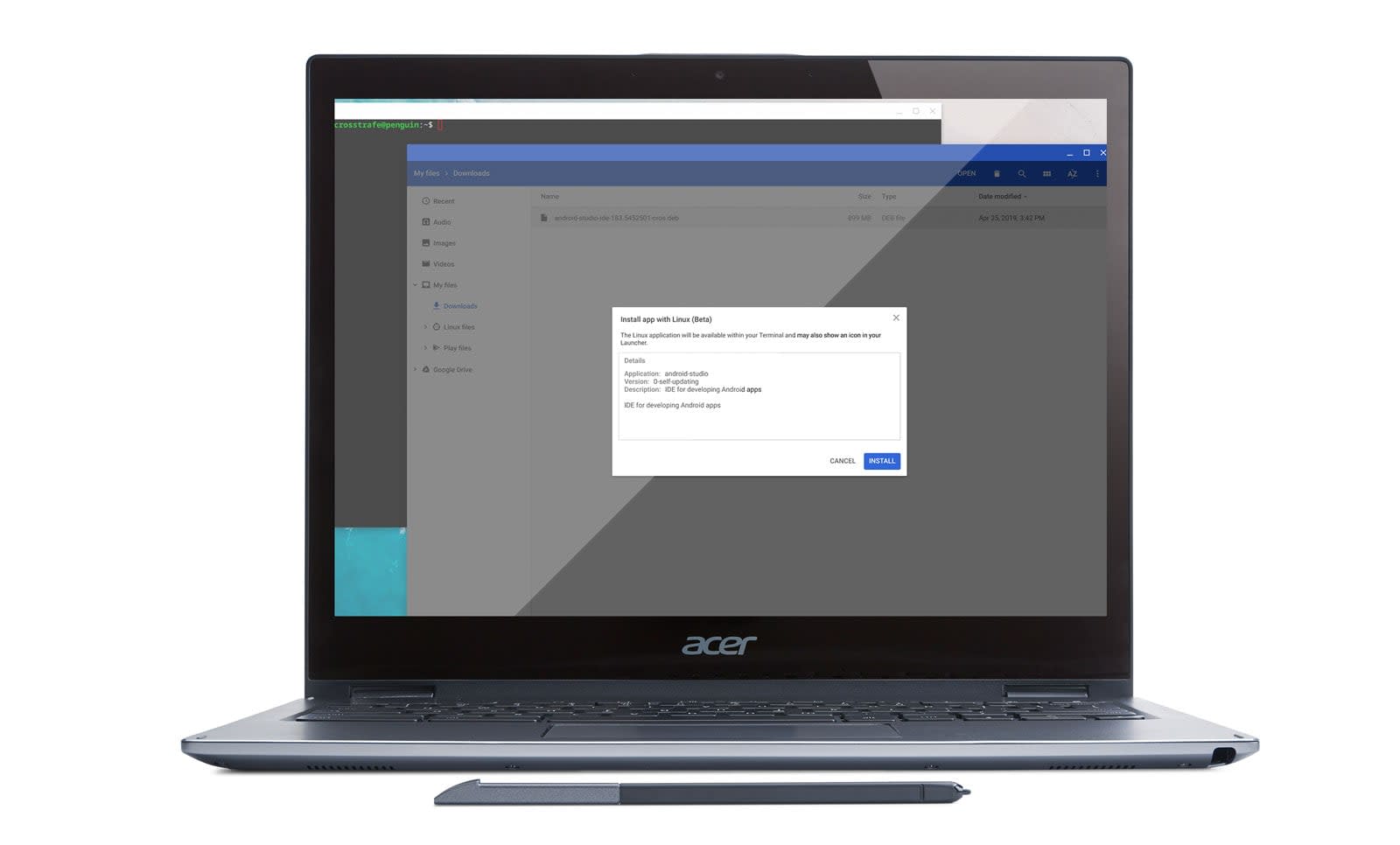 At I/O last year, Google announced it was adding Linux support to Chrome OS, a move that made it a lot easier for web and Android developers to use Chromebooks. One year later, the company says that more than half of all Chromebooks now work with Linux, and all new devices released this year will support Linux as well. And today, Google has a handful of developer-focused updates that'll make building Android apps on Chrome OS a good bit easier.

For starters, Google's making it a lot easier to install the Android Studio development environment on a Chromebook. Last year's Linux support made it possible to do, but it wasn't exactly the smoothest process. Now, though, Google says it'll be a one-click install. The company also added secure USB support for Android phones and Chromebooks, which means that developers can build, debug and push app builds to a phone using Google's "developer-recommended" Chrome OS devices.

Google is also tying Chrome OS and Linux together through the file manager. Users will be able to swap and move files between Google Drive, local Chrome OS storage and Linux using the default files app. The company also improved port forwarding, something that Google says will enable developers to run a web server via Linux while debugging at the same time.

These aren't groundbreaking, major changes -- but they should hopefully make it easier for developers to do their work on Chrome OS. And that might have a secondary benefit of getting Android devs to think about larger screens when building their apps. Chromebooks have been able to run Android apps for years now, but the experience is often sub-par, simply because developers don't have big displays in mind when building those apps. It's the same problem that plagued Android tablets for years, and one that Google still hasn't quite been able to solve.

But there's a lot of momentum behind Chromebooks. Google says that in the last year, the number of monthly active Chrome OS users who enabled Android apps on their device grew by 250 percent. The company also referred to NPD data saying that 21 percent of all laptops sold in the US were Chromebooks in Q4 2018, both stats that show there's some potential benefit to Android developers making their apps work better on those devices. Given that I/O is Google's big annual pitch for developers, it makes sense that the company is trying to make it easier to develop Android apps on Chrome OS -- and hopefully those developers will take bigger screens into account as they do it.

In this article: android studio, chrome, chrome os, gear, google, googleIO2019, linux, mobile, personal computing, personalcomputing
All products recommended by Engadget are selected by our editorial team, independent of our parent company. Some of our stories include affiliate links. If you buy something through one of these links, we may earn an affiliate commission.