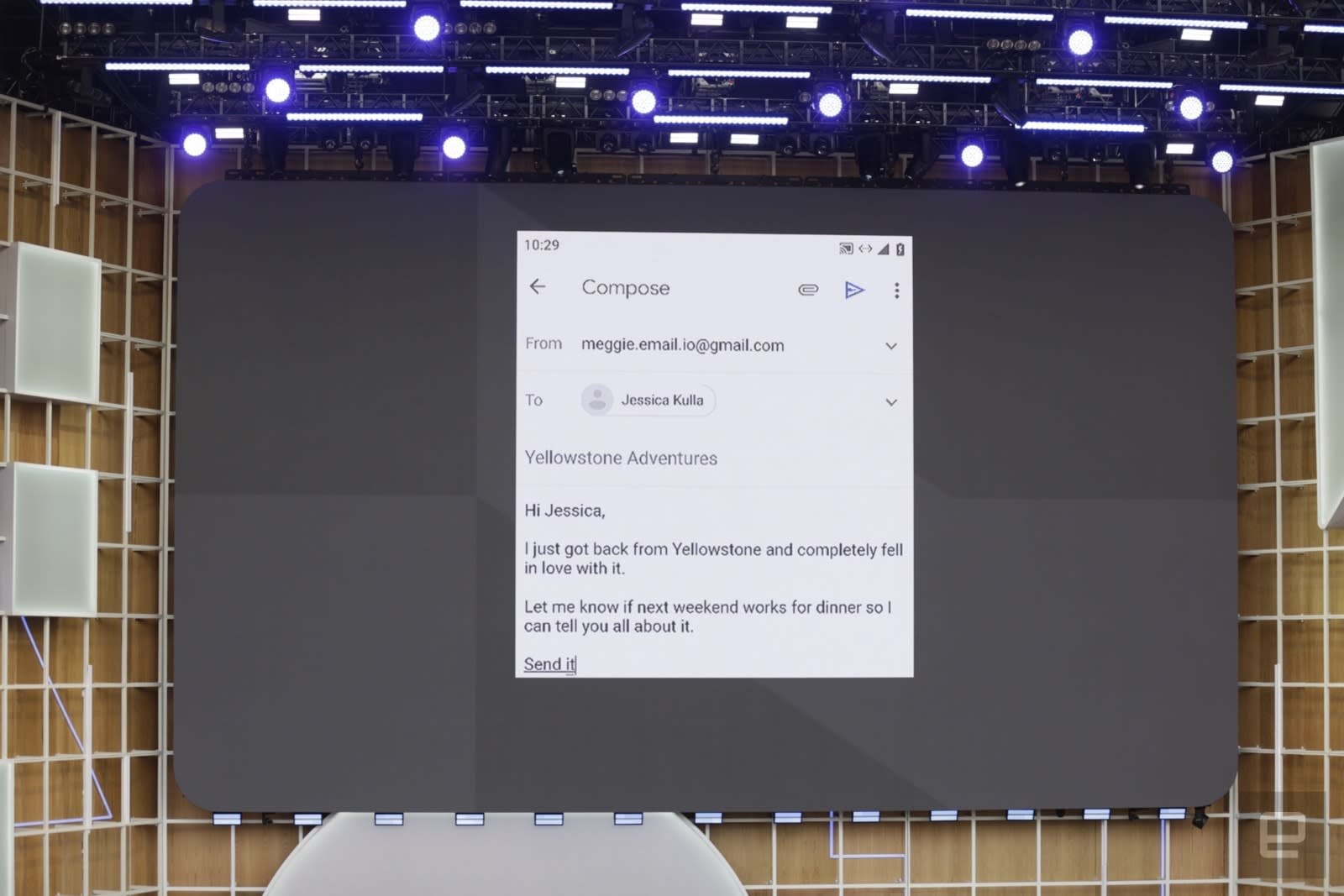 It's been a year since Google first introduced Duplex, its automated reservation-making feature for Assistant. The AI phone caller has rolled out to customers in 44 states, as well as non-Pixel handsets, and even spawned a corollary service for small businesses: Calljoy. At the I/O 2019 conference in Mountain View, California on Tuesday, Google announced that it will be expanding the service to web tasks as well, starting with vehicle rentals and movie ticket purchases.

The new feature, Google CEO Sundar Pichai explained to the assembled crowd, will work very much like the current phone-based reservation system: users simply open Assistant and, in the case of renting a car from National, say "book me a car through National." The Assistant will then automatically open the National website and begin filling in the required fields on the user's behalf. The user will be prompted to confirm details like the rental dates and class of vehicle throughout the process, but Assistant will be doing the data-entry drudgery. Pichai also points out that this process requires no work or modification on the part of online businesses. Rather the new feature is an early example of Google's "Duplex on the web" program.

Duplex's ability to understand your commands relies on a complex series of machine learning models. Typically, running these algorithms on a mobile device requires around 100GB of storage and an internet connection, Pichai explained. "Think of it as putting the power of a Google data center in your pocket," he said.

However, he continued, Google has made a breakthrough in deep learning techniques and has managed to condense and combine that 100GB of models down to just half a gigabyte (0.5GB). That's small enough to fit onto mobile devices, allowing them to run the algorithms locally, thereby drastically reducing network latency. It's so fast, Pichai quipped, that it makes tapping your phone to activate Assistant seem slow.

This "next generation Assistant" as Google VP of Engineering, Scott Huffman describes it, is so fast that it operates in real time. In the subsequent demo, a Google employee activated the Assistant and then rattled off a litany of commands and request, which the system handled without a hiccup. It also enabled the employee to quickly look up information and multitask between apps without having to flip back and forth between various screens.

The next Assistant will also be far more personalized to the preferences of individual users thanks to the new Picks for You function. As Huffman demonstrated during the keynote, if the Assistant has previously helped you look for barbecue or Italian recipes in the past and you ask it what you should make for dinner tonight, it will likely recommend bbq and Italian recipes to make tonight. "What I love is that different people get completely different results," Huffman exclaimed. It will only be available on smart displays like the Home Hub when it launches later this summer. Recipes, podcasts, and events will be the first subjects available for personalization.

As for the new Assistant, it's expected to roll out to Pixel phones later this year.

In this article: assistant, breaking news, gear, google, google assistant, googleio2019, robots
All products recommended by Engadget are selected by our editorial team, independent of our parent company. Some of our stories include affiliate links. If you buy something through one of these links, we may earn an affiliate commission.