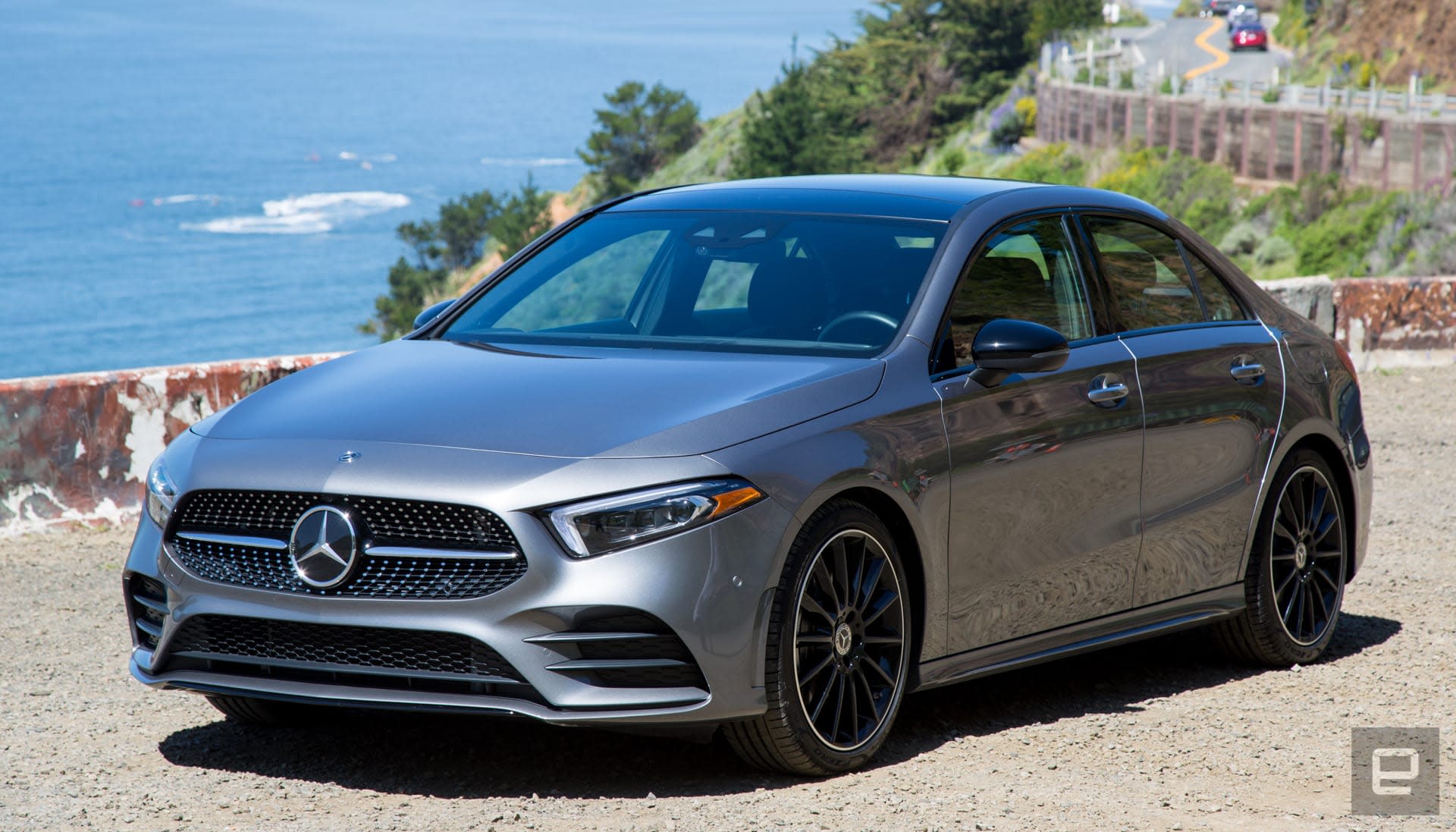 The Mercedes A220 raises the bar for 'inexpensive' luxury cars

A tech-filled Benz no longer requires your entire life savings.

The small sedan is Mercedes' play for up-and-coming S-Class owners. Right now that person is just launching their career. Eventually, they want the big office, the big house, the invitation to the exclusive club where they can sneak cigars on the deck and of course, the large, luxurious German sedan. But while they climb the corporate ladder, they can still impress their bosses with the small Merc that has many of the same tech features you'd find in the CEO's car.

The A-Class (specifically the A220, starting at $32,500) was announced as the first vehicle to get Mercedes' latest infotainment system, MBUX. With it, you can control almost anything in the dash with your voice, using natural language. You can tell the car you're too hot and it'll lower the temperature. Need to add a taco stop to your road trip and only want to visit restaurants with four or more stars on Yelp? Just say, "Hey Mercedes" and tell it to add an additional stop with those parameters using a combination of Nuance's Dragon Drive speech technology and SoundHound's cloud-based technologies (which handles complex sentences and US specific use cases). 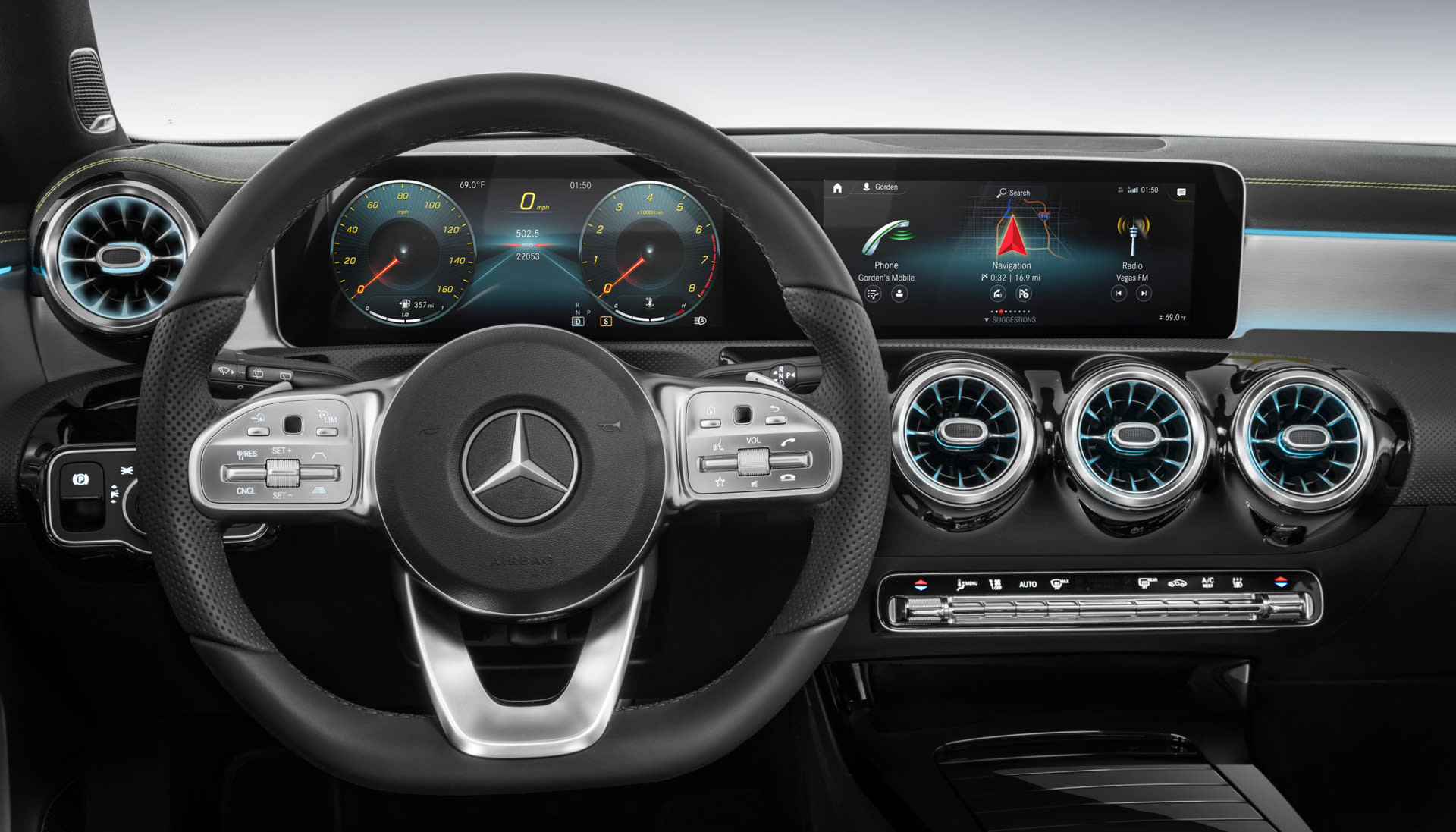 If you'd rather not talk to your car, Mercedes has three additional input methods. There's the typical touchscreen (housed in a bright 10.25-inch display), a trackpad in the center console and a tiny trackpad on the steering wheel. Unless I was using CarPlay (which support for comes standard), I defaulted to the trackpads. The reason they work so well is that Mercedes created an Infotainment UI that uses three large features on the homepage. It's not exactly sparse, but its minimalism is easier to decipher than a screen filled with multiple icons.

After spending a week with MBUX, it's clear that Mercedes has done an outstanding job creating an infotainment system that replaces the act of plugging your smartphone into your car and using CarPlay or Android Auto. I found talking to the car for navigation easier than using Google Maps for complex routes. Plus, the AR feature of the display showing a camera view of an upcoming turn complete with arrows and a name of the road floating above said route is a brilliant use of AR. That's right, Mercedes found a practical use for AR.

The rest of the technology inside the A220 is nearly as remarkable. The driver's assistance system is on par with the rest of the market (if you don't factor in Tesla) with adaptive cruise control displaying smooth transitions during merges and cut-ins. It'll also read signs and slow down your set speed to match the legal speed limit. That's helpful if you're trying to limit your traffic violations, but you can turn it off if you're fine trusting your gut. Also, the Lane-keep assist kept the vehicle centered in all but the sharpest freeway corners. I found that the system particularly shines when you're stuck in gridlock. Nothing like traffic to remind you that most driving is a chore best suited to having a robot companion. 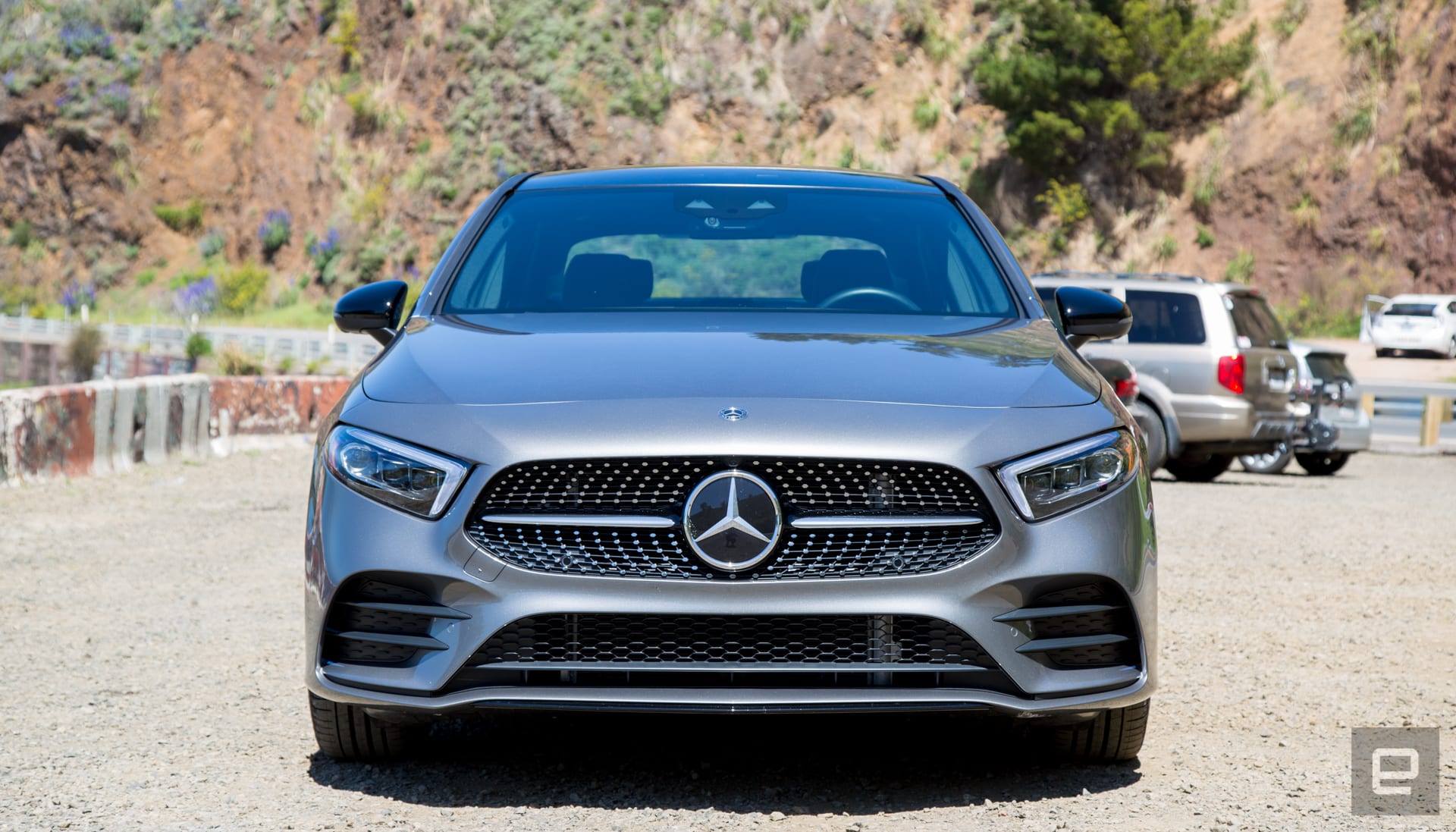 When you do get the chance to drive the A220 above 15 miles per hour, it's a gratifying experience. On paper the car's 2.0-liter inline-four engine, with 188 horsepower and 221 foot-pounds of torque, seems underpowered. On the road, though, it's quick and powerful enough for nearly every situation. From passing cars to traversing on-ramps to mountain driving, there's always just enough oomph to make pressing the accelerator an enjoyable experience.

The handling wasn't as surprising, but I still enjoyed whipping the smallest Merc around the switchbacks of Marin County, California. It helped that Mercedes sent the all-wheel-drive 4Matic version of the car (a $2,000 upgrade) for us to test. The car has a bit more body roll than I like, but most folks will never push the A220 that hard. If you're looking for a performance version of the A-Class, Mercedes just unveiled the 302 horsepower AMG A 35 at the New York Auto Show last month.

The little A220 also impressed with its interior. The seats are firm but comfortable for short to mid-length road trips. The rear seats can handle two adult-size humans comfortably as long as you're not stuck behind a tall person.

While this might be the "inexpensive" Mercedes, the interior still exudes the typical Mercedes luxury we've come to expect from the automaker. It has the same design elements you find in the upper-level vehicles. Plus, there are fun lighting accents that can be customized with 65 different colors, and it makes the air vents change color as you adjust the temperature: red if you're making it warmer and blue if you're cooling the cabin down. It's a goofy little feature (it costs an extra $310) that's more fun than it ought to be. Would I pay for it for the sake of showing my friends that the interior changes color as I drive at night? Yeah, I would. 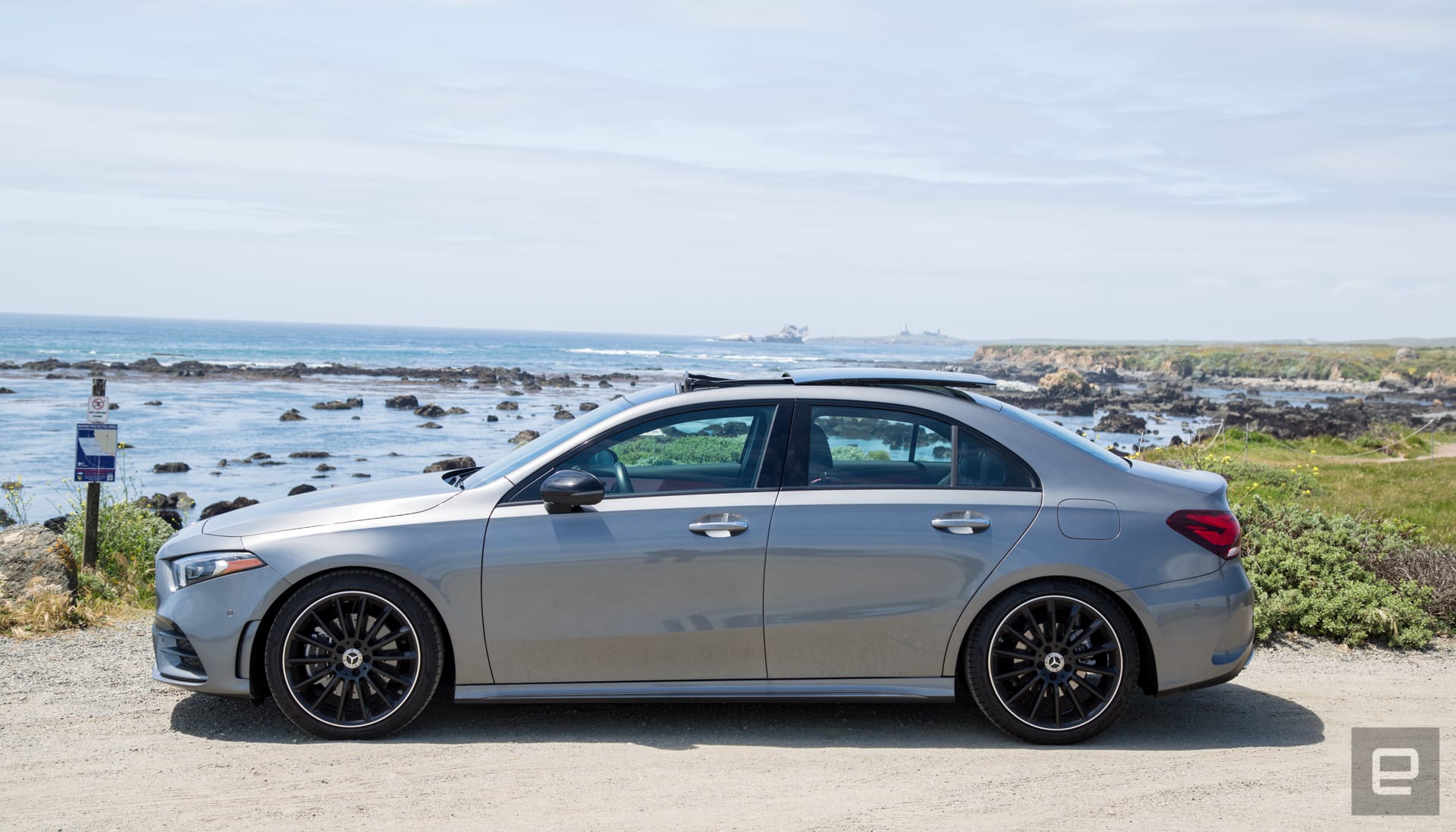 Even if you opt not to get the light show, the A-Class is a wonderful addition to the automaker's lineup. It's a luxury sedan that starts at under $40,000 that delivers options you'd expect to find in more-expensive vehicles. My biggest issue is that the US model won't be offered as a hatchback. This little sedan is, in my opinion, one of the best-looking Mercedes available in the United States, but the hatchback version is even more visually outstanding.

Mercedes took a chance putting its new tech in the entry-level vehicle of its lineup. But maybe it realized that those younger buyers would accept a voice-activated assistant in their car more readily than older buyers who are cruising in the S-Class. The experiment of trickling the latest tech up through the models instead of down will make those looking for luxury on a budget happy. It's a smart move for a smart car.

All products recommended by Engadget are selected by our editorial team, independent of our parent company. Some of our stories include affiliate links. If you buy something through one of these links, we may earn an affiliate commission. All prices are correct at the time of publishing.
View All Comments
The Mercedes A220 raises the bar for 'inexpensive' luxury cars