Boosted's next electric ride is the Rev scooter

Beat your Bird and Lime buddies to the bus stop.

When Boosted launched a new series of boards in 2018, including the Stealth and Mini options, it claimed its mission was to redefine transportation -- at least from the electric rideable standpoint. Now, it's finally broken out beyond the skateboard mold and added the Boosted Rev electric scooter to its stable of products.

The Rev is more than just a fun sidewalk scoot; it's truly a "vehicle-grade" product. At first glance, you get more of a motorbike vibe than a plaything. The frame is a combo of 6061-T6 extruded aluminum and forged parts, making a super-solid ride. The plank area is spacious, with a touch of give for comfort, but it's a far cry from the bounciness of Boosted's longboards. The two in-wheel 750-watt motors seem quieter than the boards as well, partly because it ditched the familiar (and exposed) belt-drive mechanism. You can crank the Rev up to 24MPH, cruise up 25 percent inclines and cover a range of up to 22 miles. It also has wide air-filled tires and more than enough ways to slow down: There are three braking methods.

If you were fine with the pricing on Boosted's Stealth longboard, then you'll find no surprises here. The Rev electric scooter is similarly priced at $1,599, and you may feel more confident spending that amount here given its size and build quality. There also seem to be fewer parts subject to the casual wear of a skateboard, although you're buying into a completely different kind of fun.

There's been a lot of talk about e-scooters and the ridesharing industry of late, but Boosted is aiming for the owner's market instead of jumping into that. (Although, it is a direction two of its previous co-founders decided to head two years ago.) I'd been wondering if many people really did own scooters. I don't see many around NYC (due to a current illegal status here), and my perception was mostly of burgeoning rideshare options -- usually found in warmer regions.

The Rev's quality and price tag do make it less of an option for the hard-worn life of a rideshare scooter. If anything, I could see private tour companies offering pricey rentals to tourists (Segway, anyone?), but not much in the rent-ride-and-ditch business model.

After getting a close-up look at a pre-production model first-hand, I do have some observations to share. Keep in mind though, I'm a bit of a scooter neophyte and only had the opportunity to do a few laps around the desks in our office. The turn radius is better than I thought, though.

The Rev weighs 46 pounds, and that needs to be considered. It does fold down and lock, so you can viably bring it onto secondary public transport like a bus or a train, but it won't be that easy in regards to both space and lugging it around. It would be the perfect last-mile solution that you store in your car, or even as a primary method of transport like your daily commute. Let's just hope you have an elevator in your building. 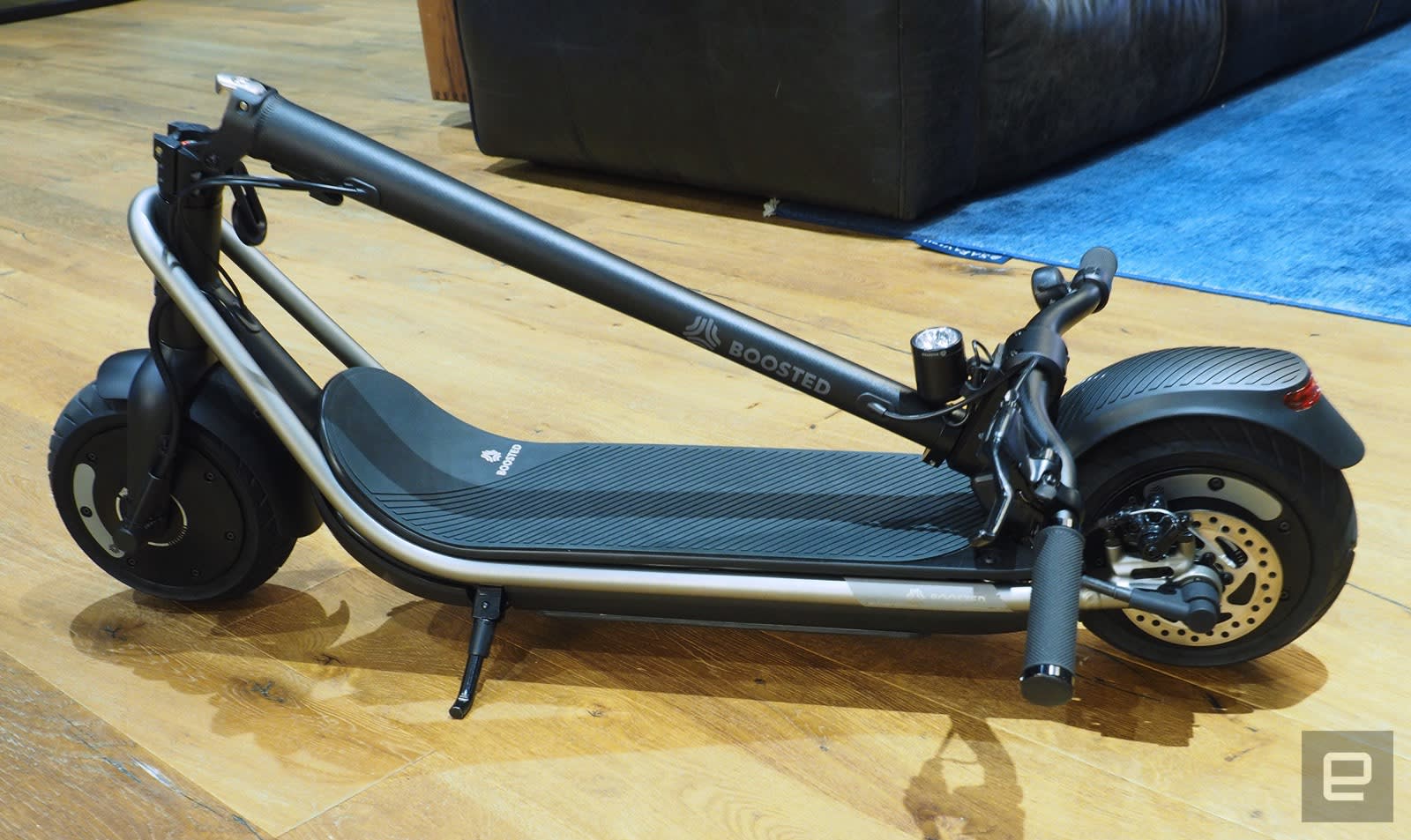 The Boosted Rev is obviously a rugged-looking ride, but it's also weatherproof. The main powertrain components are rated IP67, which means the important parts can survive for about 30 minutes in three feet of water. The charging port has a rubber stopper, but the internals are also treated to be water resistant. Unlike the skateboards the company sells, this scooter has fenders so your clothes are safe from wheel-based splashback too.

You get relatively thick and rugged tires here, but there's a tube inside if you do ever get a puncture. I'm told this isn't much different from switching out a bike tire, although you'll need the included tool to unscrew the hub hardware. After that, it's supposed to slide out for an easy swap. Fifty PSI shouldn't be too hard to handle if you only carry a hand pump, and luckily, Boosted should be providing a couple of tubes in the package. 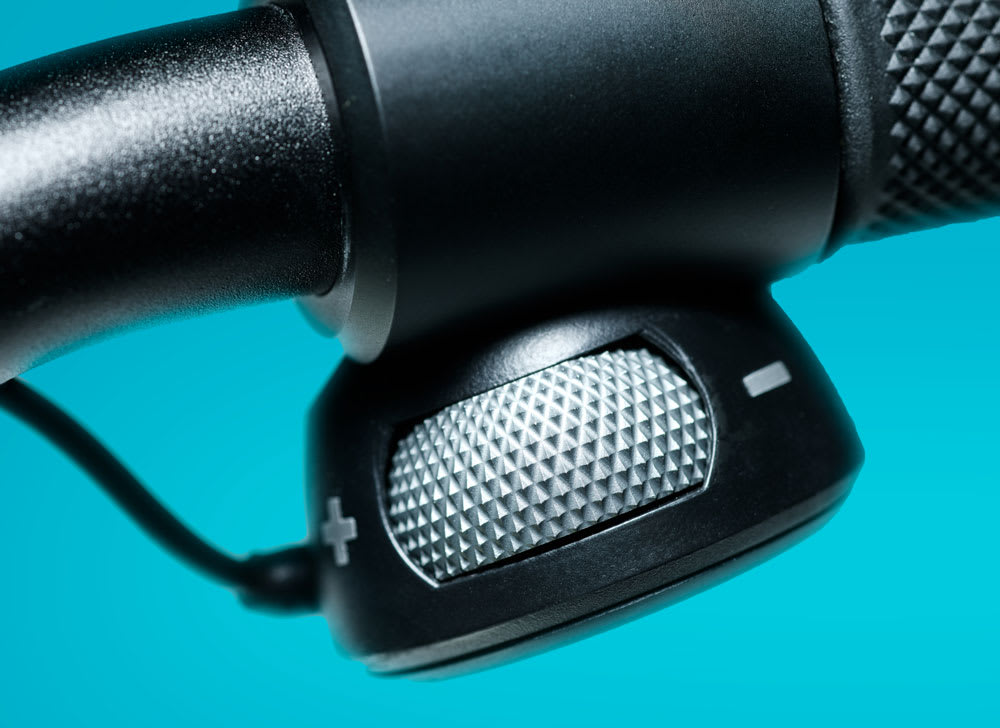 As I've mentioned, the Rev can go up to 24MPH, which is plenty. (Most rideshares top out at about 15.) There's a throttle wheel on the right that is similar to the hand-held version used with the Boosted boards. Simply roll it up (to the left actually) for speed and the opposite to slow down. There's no reverse available here. Since each wheel has a motor, there's electronic braking within each one. There's also a mechanical disc brake on the rear wheel that you control from the left handlebar. I'm told this is an added bit of safety, at least for now. (Perhaps people need to actually see a brake to be mollified until they get used to things.) But wait, there's more! You can also press down on the rear fender with your foot for additional friction-based stopping. 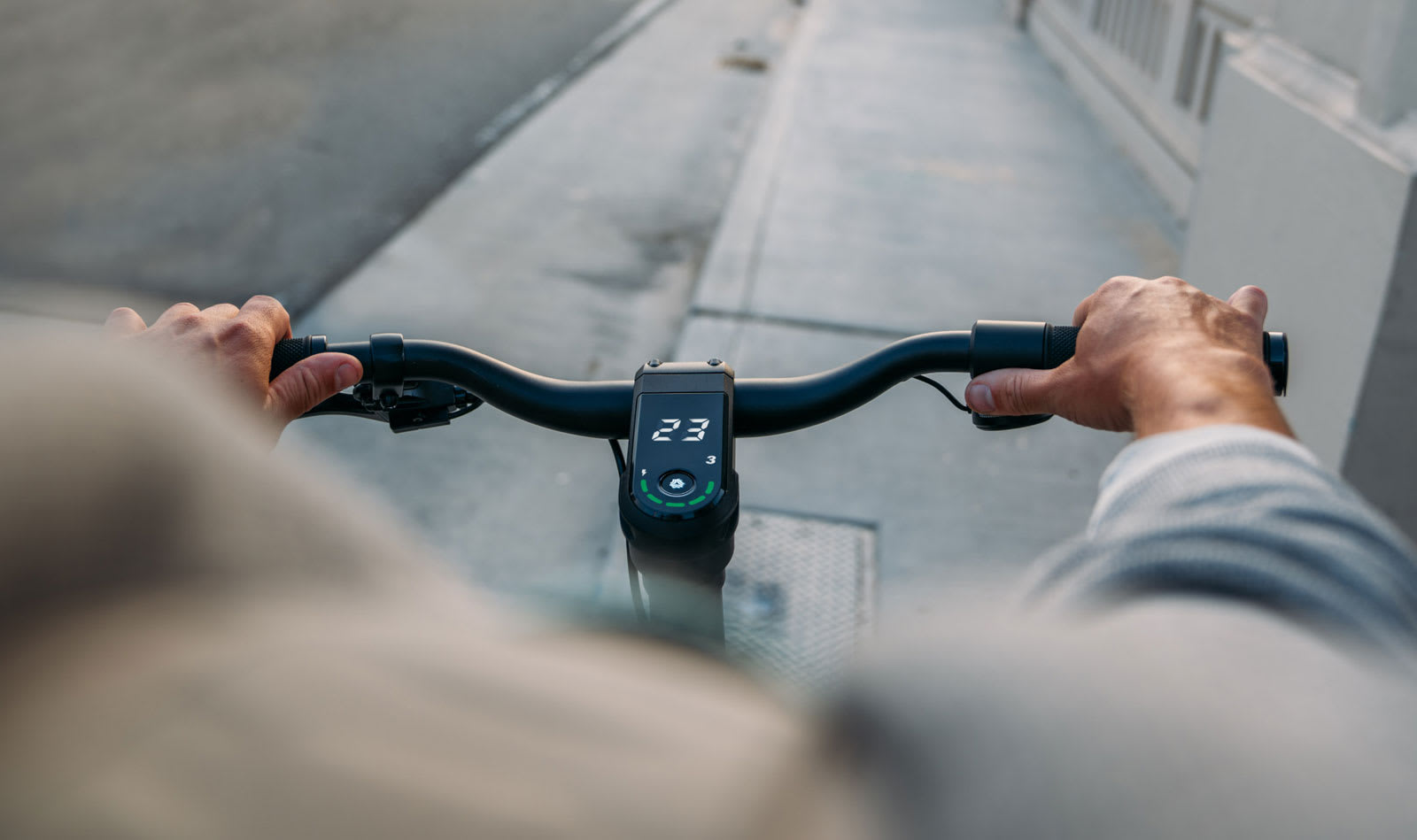 The speed and battery life display

Last but not least, there's also a display on the handlebars so you can see how fast you're going and how much battery you have left. Since it has a 22-mile range, I think you'll be OK in most situations unless you keep forgetting to charge it. If you have a Boosted board already, you're in luck: It runs on the same charger. You can also swap the battery out, if you're so inclined, but it's not hot-swappable, so that will take a bit of extra effort. The display area also includes a button that turns on the Rev, sets one of three ride modes (slow to fast) and toggles both the 400-lumen headlight and red brake light (found on the rear fender).

The Boosted Rev is available for pre-order now ($1,599) on the Boosted website and should begin shipping both in the domestic US and internationally some time this summer.

All products recommended by Engadget are selected by our editorial team, independent of our parent company. Some of our stories include affiliate links. If you buy something through one of these links, we may earn an affiliate commission. All prices are correct at the time of publishing.
Boosted's next electric ride is the Rev scooter
boosted
escooter
ev
gadgetry
gadgets
gear
personal transportation
rev
scooter
transportation