Like the MacBook Touch Bar but a lot taller and cooler.

Every once in awhile, a briefing pleasantly surprises me. And that's what happened when ASUS brought the new ZenBook Pro Duo to our office in New York last week to give us a preview prior to its Computex debut, today. It's hard to describe this bizarre-looking machine, but think of it as an almost dual-screen laptop. We're not talking about the fully dual-screen Project Precog notebook that ASUS unveiled last Computex, but the Pro Duo feels like the middle stage of an evolutionary process towards that dubiously glorious end.

There's no room on this deck for a touchpad after the keyboard, so ASUS relocated it to the right of the keys. This design is similar to the one on the company's ROG Zephyrus gaming laptop and on both machines, the hinge juts out slightly below the computer to slightly lift the keyboard when you open the notebook, to allow for better airflow and a more comfortable typing angle.

It took me awhile to adjust to having the trackpad on the right, since my fingers naturally wander towards the space bar to use the mouse. But once I was in the right place, the touchpad felt just as smooth, responsive and intuitive as other setups I'm used to. I dragged windows around a screen and pinched to zoom in on websites just as I would on any other laptop.

This touchpad has an extra skill, though: With the push of a button, you can turn on LED outlines for a numpad and use it to punch in digits.

What sets the ZenBook Pro Duo apart from notebooks in its class is the secondary 14-inch 4K LCD touchscreen that ASUS is calling the ScreenPad Plus. You can treat this like a separate display and drag apps down to it from the primary 15.6-inch screen. ASUS reps opened Spotify and File Explorer on the ScreenPad Plus while we worked on a spreadsheet up top. All three programs ran smoothly as we multitasked, and I could reposition the apps however I liked. 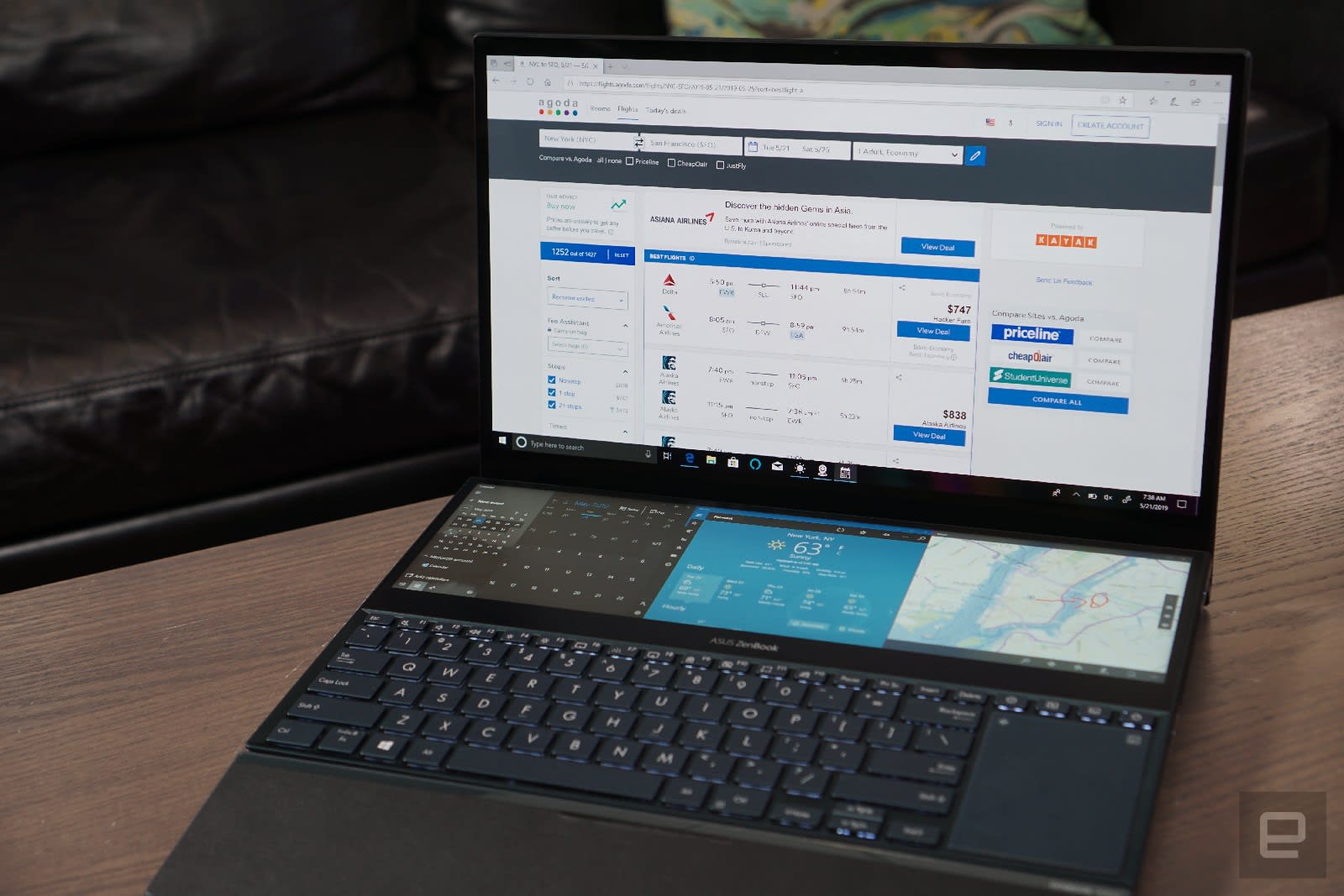 By tapping a key on the top right of the secondary display, I could snap the windows so they tiled neatly next to each other. Though Windows only allows automatic snapping for up to two apps, ASUS tweaked it so that you can tile up to three, making better use of the super-wide aspect ratio.

Moving windows between the two screens was slightly tricky, however. To send an app from the bottom display to the top (or vice versa), I had to drag it by the title bar slightly and wait for a panel to appear. This showed three options -- Switch screens, Extend and Snap. Then, I had to move the window till it hovered over the Switch screen option and let go to send it to the other display. It sounds complicated but is really just like dragging a file into a folder and isn't too difficult to maneuver as the pop-up appears near the cursor.

I was particularly impressed by the ScreenPad Plus' support for pen input. This means you could have a note-taking app open on it and jot down your thoughts while watching a TED talk on the main screen, for example. ASUS includes a stylus with the Pro Duo, too.

You can also use the secondary screen to extend the content on your primary display -- that is, have your webpages or spreadsheets spill over to the lower deck if you want. This offers some extra real estate in a pinch, which can be handy for when you're working on a massive document and don't have the luxury of an external display. Video editors who tend to go crazy layering a ton of tracks in their timelines will also appreciate the extra space this provides. 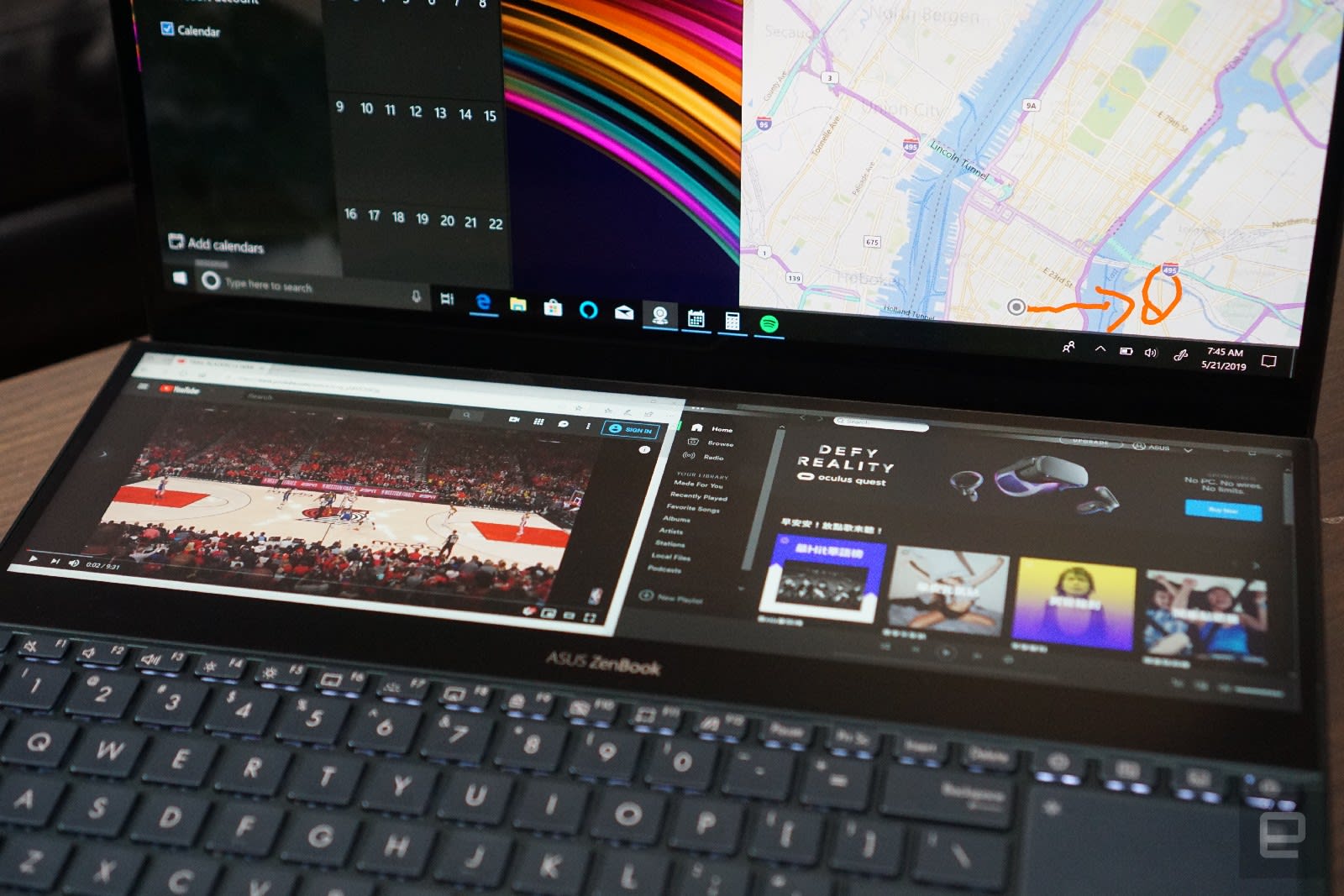 When you don't need the backup screen, the Pro Duo's primary 4K OLED panel should serve you well. It was bright and vivid under the harsh conference-room lights at our office, and the websites we visited were easy to read. The keyboard was comfortable to type on, offering the ample travel you'd expect from a notebook this large.

This beast of a machine comes equipped with appropriately powerful guts, like an Intel Core i9 HK chip that's unlocked for overclocking, as well as an NVIDIA RTX 2060 graphics card, which supports ray-tracing for advanced lighting effects.

The Pro Duo also comes with a wrist pad to support your hands while typing, since the keyboard sits on the bottom edge of the deck. Like other ZenBooks, it also comes in an attractive Celestial Blue color with pretty gold accents, which is nicer than boring black. 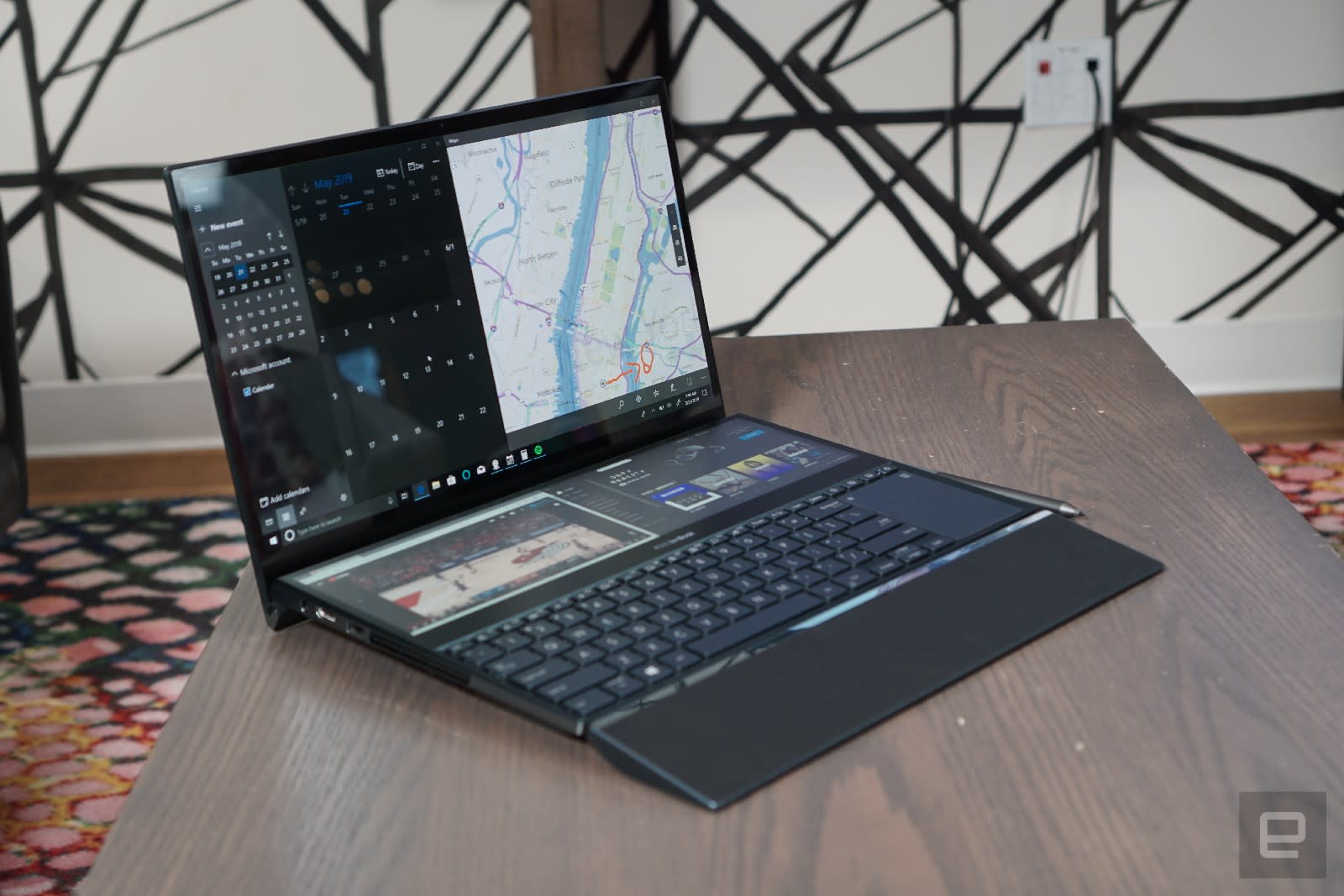 ASUS is also offering a 14-inch option called the ZenBook Duo, which uses a Core i7 and a GeForce MX 250 GPU instead. It sports a full HD resolution on both the main display and its 12.6-inch ScreenPad Plus. ASUS hasn't said if this model is headed stateside, but it does appear to be a more suitable option for those who want to try out the ScreenPad Plus but don't want to splurge on a super-high-end workhorse. That said, we don't yet know how much either system will cost nor when they'll be available, but I already know I really want to try one out in the real world, especially to find out how its battery holds up. After all, there's an extra 14-inch screen to power.