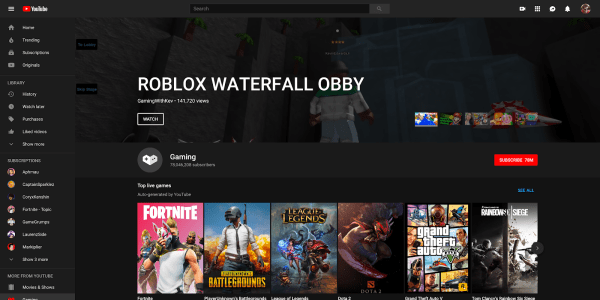 After almost four years, YouTube is closing its dedicated gaming portal and merging it with the main platform. It announced the move late last year, but missed the original March shutdown date. YouTube Gaming will cease to exist on May 30th; visitors will get directed to a new channel for games on the main YouTube site instead. The app will also shut down.

In the announcement on its Google support page, YouTube said that sending visitors to the main platform would make it easier for gaming fans to connect. "We want to continue to build a stronger home for the gaming community that thrives on YouTube, not just the YouTube Gaming app," the company said.

YouTube Gaming user Luke of kwingsletsplays, which features gaming walkthroughs, has partnered with YouTube since 2009. He says his channel benefited from the standalone site and worries that these changes will lead to gamers getting lost in the shuffle. "The new hub [doesn't have] a wide variety of games and genres, instead, it focuses on trending videos on Fortnite or your personal watch history. It's not a place where gamers can search for what games they are interested in and the channels that cover them," wrote Luke in a direct message to Engadget.

YouTube Gaming arrived in 2015 in response to popular livestreaming platforms like Twitch. The dedicated site had a different look and feel from the rest of YouTube, catering mainly to PC and console fans. The site attempted to put the spotlight on new, rising personalities and often experimented with new features. YouTube's recommendation algorithms highlighted their videos across the site and lead to more viewers discovering their work.

However, Twitch continues to dominate the livestreaming market, according to data compiled by game analytics company Newzoo. The Amazon-owned platform saw nearly 64,000 users generating 1.9 million hours of live video content at the start of the year. During the same period, YouTube Gaming had 22,000 users who produced 460,000 hours of content.

In this article: gaming, google, internet, livestreaming, twitch, youtube, YouTube gaming
All products recommended by Engadget are selected by our editorial team, independent of our parent company. Some of our stories include affiliate links. If you buy something through one of these links, we may earn an affiliate commission.