Intel's 10th-gen Core CPUs will let you game on ultraportables

It was just about a month ago that Intel showed off its powerful new ninth-gen laptop CPUs, but now it's finally ready to talk about its upcoming Ice Lake 10nm chips. For one, they're officially known as 10th-gen Core. And they won't be taking much limelight away from those beefier laptop chips, as Intel is focusing on ultraportables first with U-series processors. 10th-gen CPUs will be available in Core i3, i5 and i7 variants, as you'd expect. And, just like Intel already teased, they'll feature its powerful new 11th-gen Iris Plus integrated graphics, which are fast enough to run games decently in 1080p. 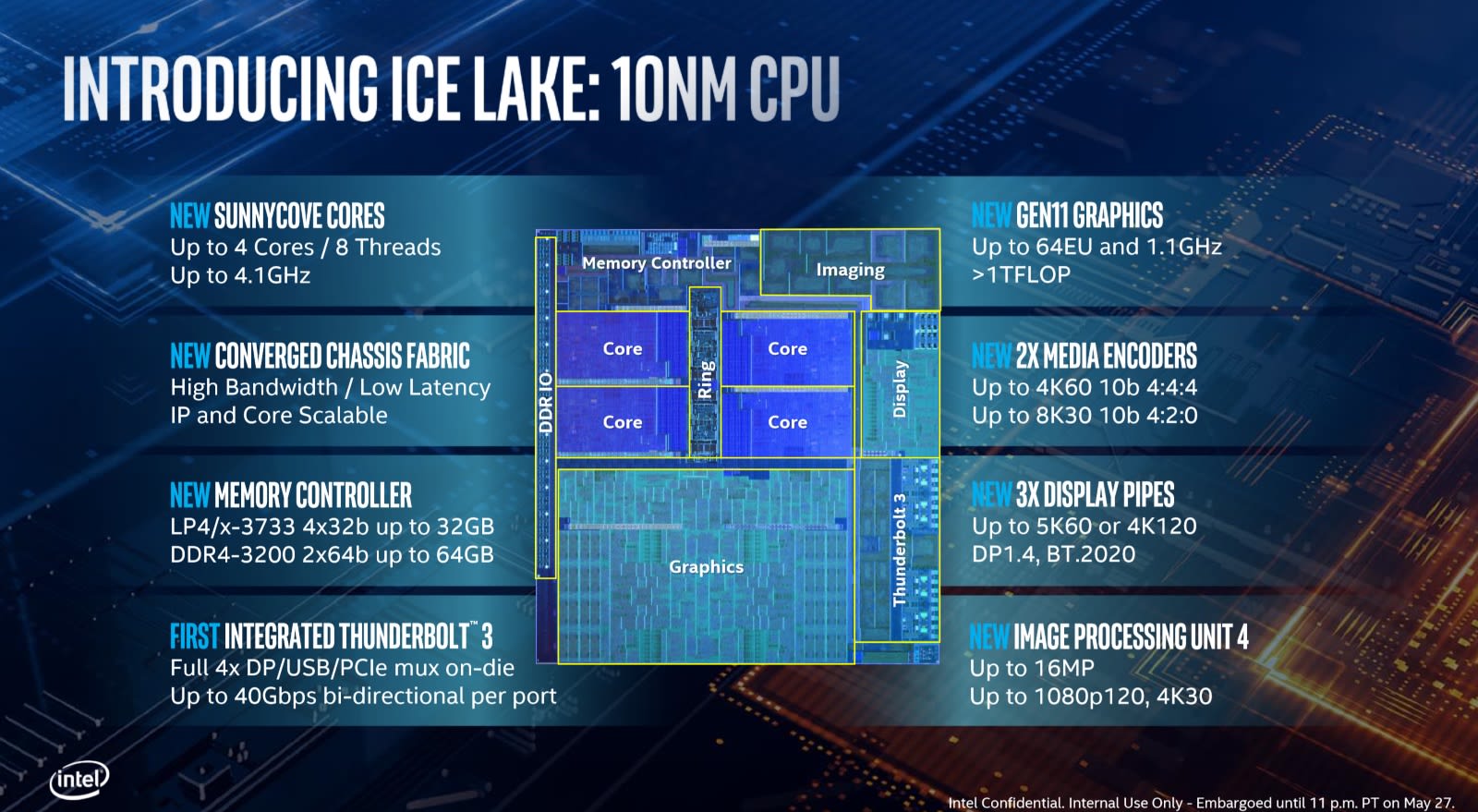 The heart of the 10th-gen CPUs is Intel's Sunny Cove architecture, which features a quad-core, eight-thread design and speeds up to 4.1GHz. In comparison, the eighth-gen i7-8565U scaled up to 4.6GHz, while the previous i5 and i3 CPUs topped out at 3.9 GHz. We don't have the full breakdown of specs for the new chips yet, but they definitely don't seem like a downgrade. Intel claims Sunnycove can handle 18 percent more instructions per clock (IPC) than before, which means they'll do a lot more at equivalent clock speeds. The company is also touting other architecture upgrades that should improve performance. That includes a much larger L1 and L2 cache; more execution ports (for handling more work at once) and better branch prediction (for anticipating tasks).

These improvements are a bit tougher to grasp than just boosting clock speeds, but the end result should be faster perceived performance for users. And, of course, there are some more direct speed improvements with the new 11th-generation graphics, which feature more than a teraflop worth of performance with 64 execution units and a clock speed up to 1.1GHz. In comparison, Intel's previous UHD 620 graphics only had 24 execution units.

As we previously saw, Iris Plus can achieve more than 70 fps in CS:Go while playing in 1080p, compared to around 45 fps from before. According to Intel's stats, it'll get close to 60 fps in Rocket League at the same resolution, and over 30 fps for Fortnite. With the previous graphics, Fortnite was barely playable in 1080p. 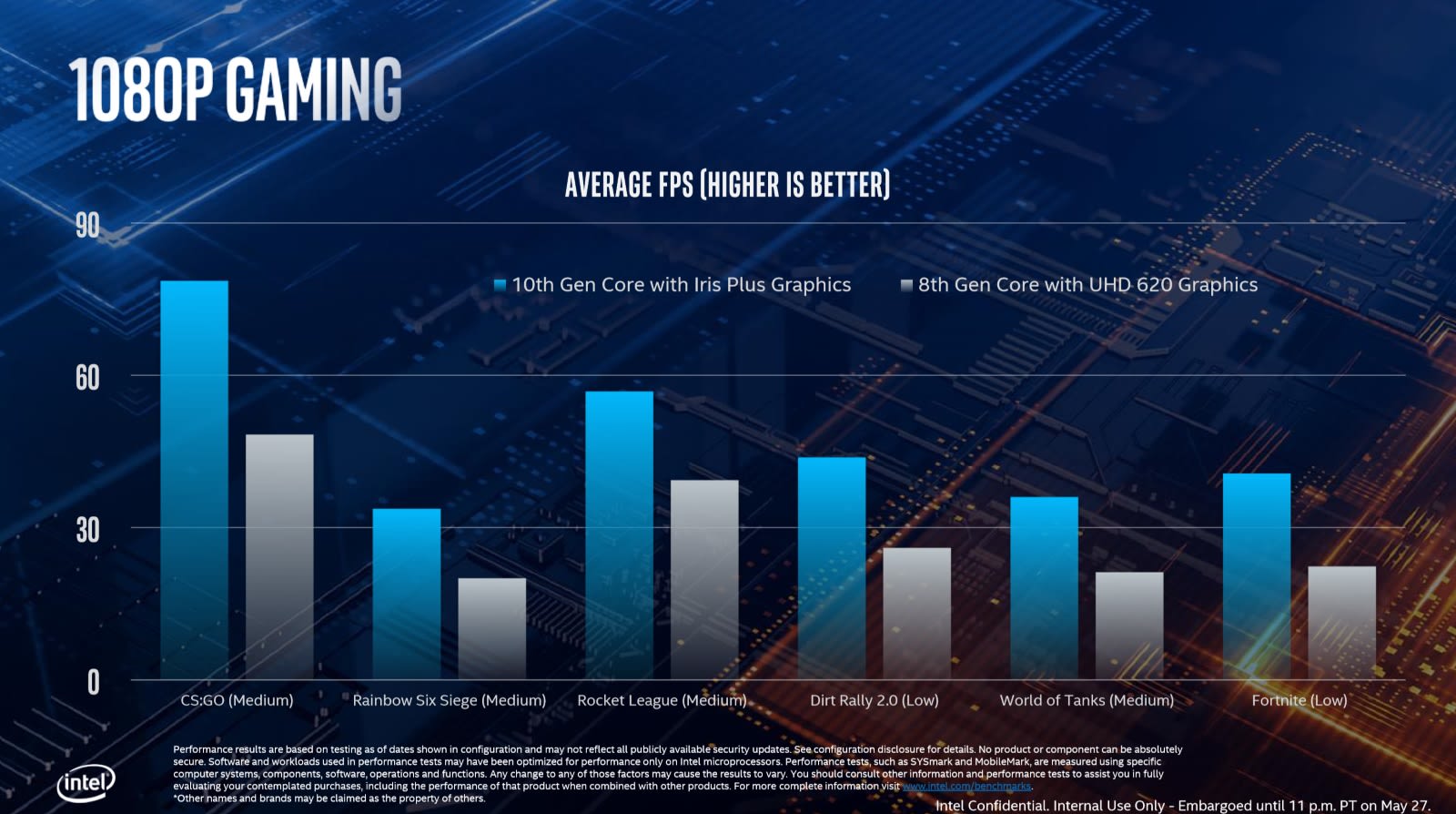 Outside of games, Iris Plus Graphics also adds support for VESA's adaptive sync standard, which should reduce screen tearing and smooth out performance on supported displays. Additionally, it'll offer video encoding acceleration for HEVC/VP9 4K/60FPS content and even 8K at 30 fps. You'll be able to take advantage of those encoders in apps like Adobe Premiere and Cyberlink PowerDirector, something that seemed unimaginable with integrated graphics a year ago. And, as a nice bonus, there's direct support for HDR and Dolby Vision playback, as well as better power efficiency.

You can also look forward to faster AI computation in 10th-gen CPUs. The new Core i7 is around two and a half times faster than last year's when processing images through the ResNet-50 deep-learning interface. In real-world usage, that means the new processors will be faster at things like semantic search in Microsoft Photos, which relies on local AI to sort images. During Intel's Computex keynote, the company also showed off how the AI capabilities could help sharpen blurry video footage almost instantly.

As for other upgrades, the 10th-gen chips will include WiFi 6/802.11ax, which offers around 40 percent faster speeds than AC wireless, and far better performance in congested areas. There's also Thunderbolt 3 support, as expected. 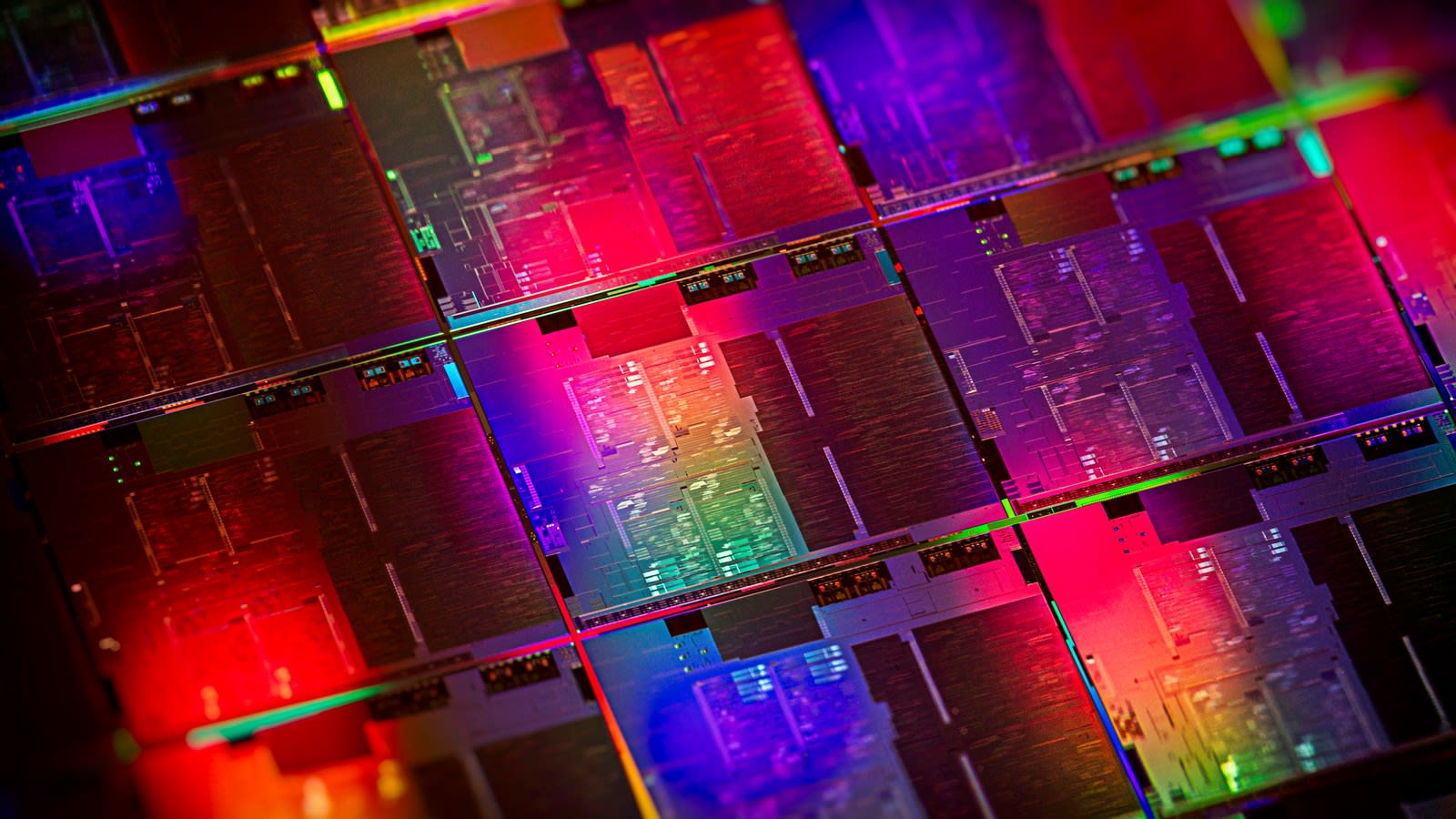 While it's a bit tough to get excited about ultraportable laptop CPUs these days, Intel's 10th-gen chips seem like a more fully featured upgrade than previous generations. The jump to 10nm is a big part of that, allowing the company to craft a more efficient architecture that's not just focused on chasing faster clock speeds. And together with the massive leap in graphics quality, these new processors will ultimately let thin and light laptops do more than ever before. It's no wonder Intel has started a new initiative for next-generation laptops in Project Athena -- all of a sudden, we can expect a lot more from notebooks.