Pushing a 28-core CPU to its limits: 6GHz and beyond

I'm mesmerized by the way liquid-nitrogen vapor flows across the motherboard. There's something oddly therapeutic about extreme overclocking, especially when the cold air gently touches my skin, making even the tiniest bumps in clock speed the more worthwhile. There's probably no better place to see it in action than Taipei's Computex, where gaming PC memory maker G.Skill gathers the world's best overclockers for its OC World Cup event (with a $10,000 top cash prize).

Our previous attempt to tame the 18-core Intel Core i9-7980XE was already rather ambitious, but this year, we decided to go all the way with the massive 28-core, 255W Intel Xeon W-3175X, a rare CPU gem that costs at least $3,000 -- if you can even find one. Our goal was to break the chip's records at the time: pushing it from its 3.1GHz base frequency to beyond 5.68GHz on Cinebench R15, or at least beyond 6.5GHz via the more lightweight CPU-Z validation. With this many cores, it posed a much bigger cooling challenge to run at higher speeds, especially compared to the quad-core i7-7700K I tinkered with the year before. 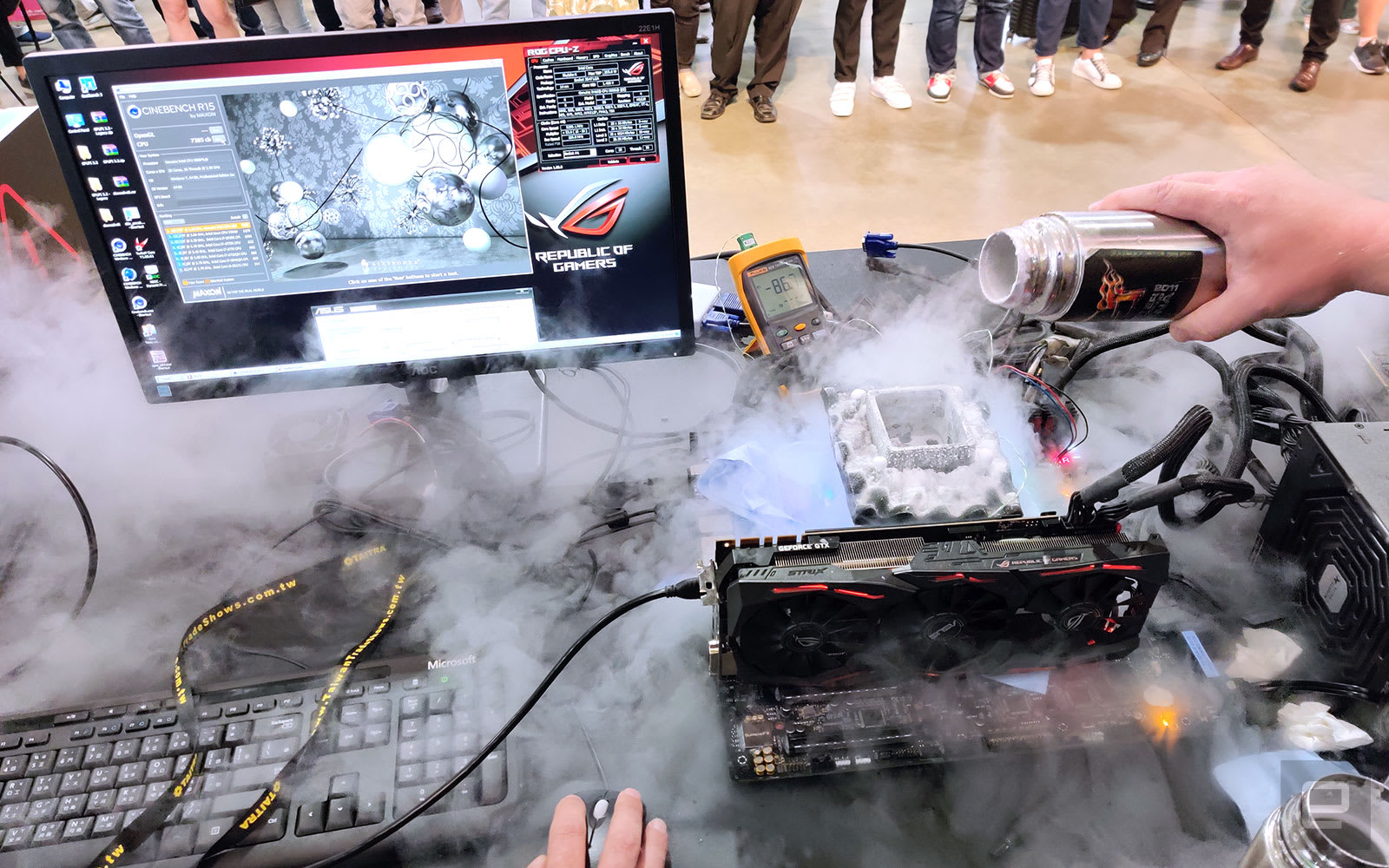 Like before, G.Skill let us go wild with its tanks of liquid nitrogen on the far end of the stage. Once again, I teamed up with my overclocking Meister, Joe "Steponz" Stepongzi, who secured an impressive rig for our CPU challenge: a beastly ASUS ROG Dominus Extreme motherboard with 12 G.Skill Trident Z Royal 8GB sticks, totalling 96GB of RAM (though the motherboard supports up to 192GB), plus a cooling pot made by another professional overclocker, Roman "der8auer" Hartung. With the CPU included, the whole rig costs somewhere between $8,000 and $10,000. "Why buy a car when you can have this setup?" Stepongzi joked.

The challenge with overclocking the W-3175X is partly due to having to keep tabs on all 28 cores, which creates more variables in power and thermal properties. The most important prep work, according to Stepongzi, is finding a suitable mounting mechanism to ensure the hefty cooling pot touches the CPU evenly. For a CPU of this size, uneven mounting will risk losing some of the memory channels -- six here instead of the usual two or four -- and drastically reduce performance. 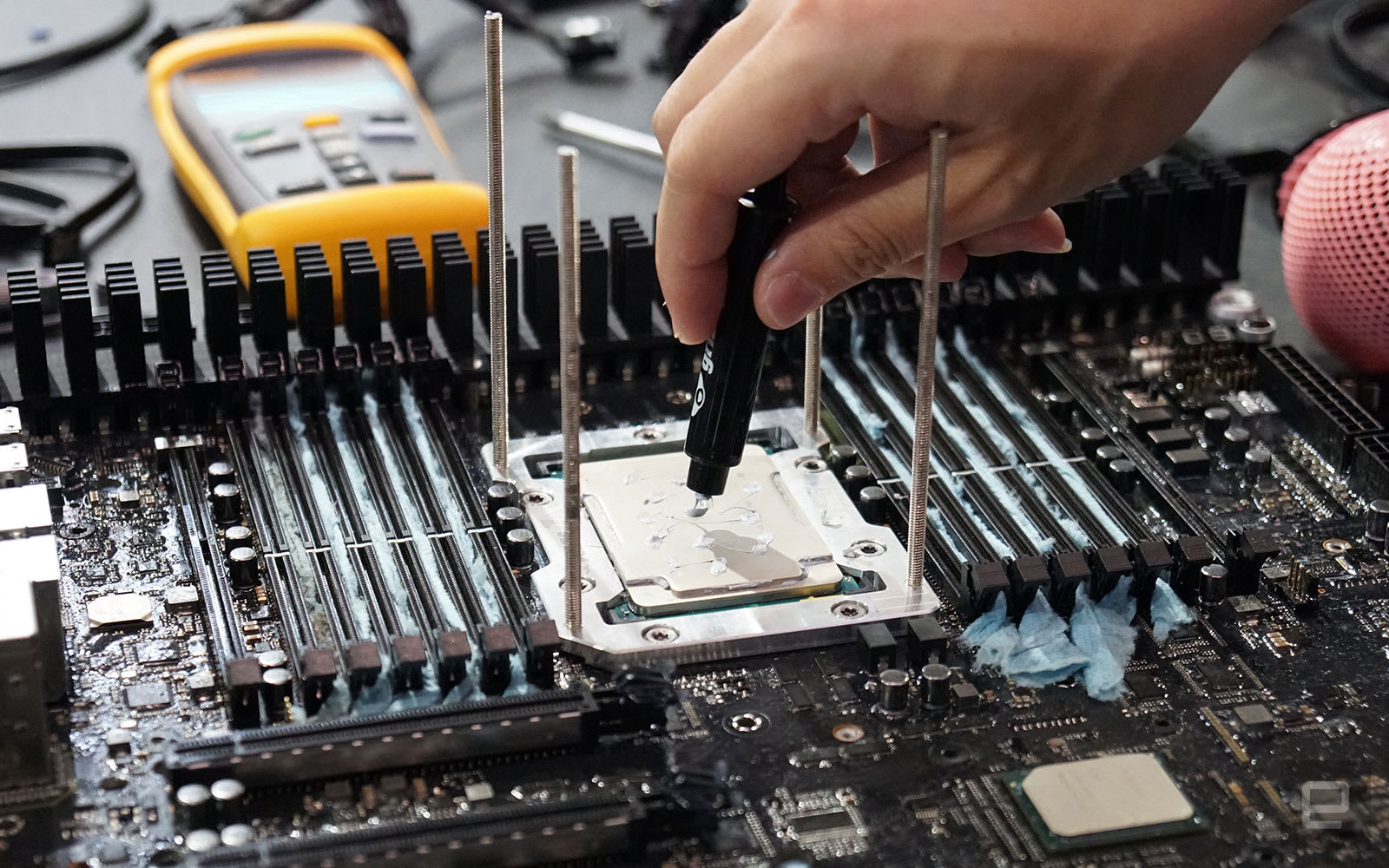 An overclocker applying thermal paste onto an Intel Xeon W-3175X before mounting a cooling pot.

The usual precautions apply. The motherboard has to be insulated with dielectric grease to fend off any accidental drops of water. Likewise, paper towel lines the gap between each memory slot, and then yet more paper towel wraps around the pot and memory sticks, to soak up condensation. A small fan helps blow the vapor away, too. When CPU performance drops or the paper towel gets too wet, you'll want to bring the kit's temperature back up using a blowtorch, dismantle everything, clean thoroughly and then reassemble to try again. This process alone could take a good 20 minutes at least.

After spinning up CPU-Z, we made some some fine adjustments on the clock speed and voltage in between pours, eventually stopping at 6.1GHz. That was still some way away from the 6.5GHz world record at the time of writing, but we had to make-do with the piece of silicon we got. 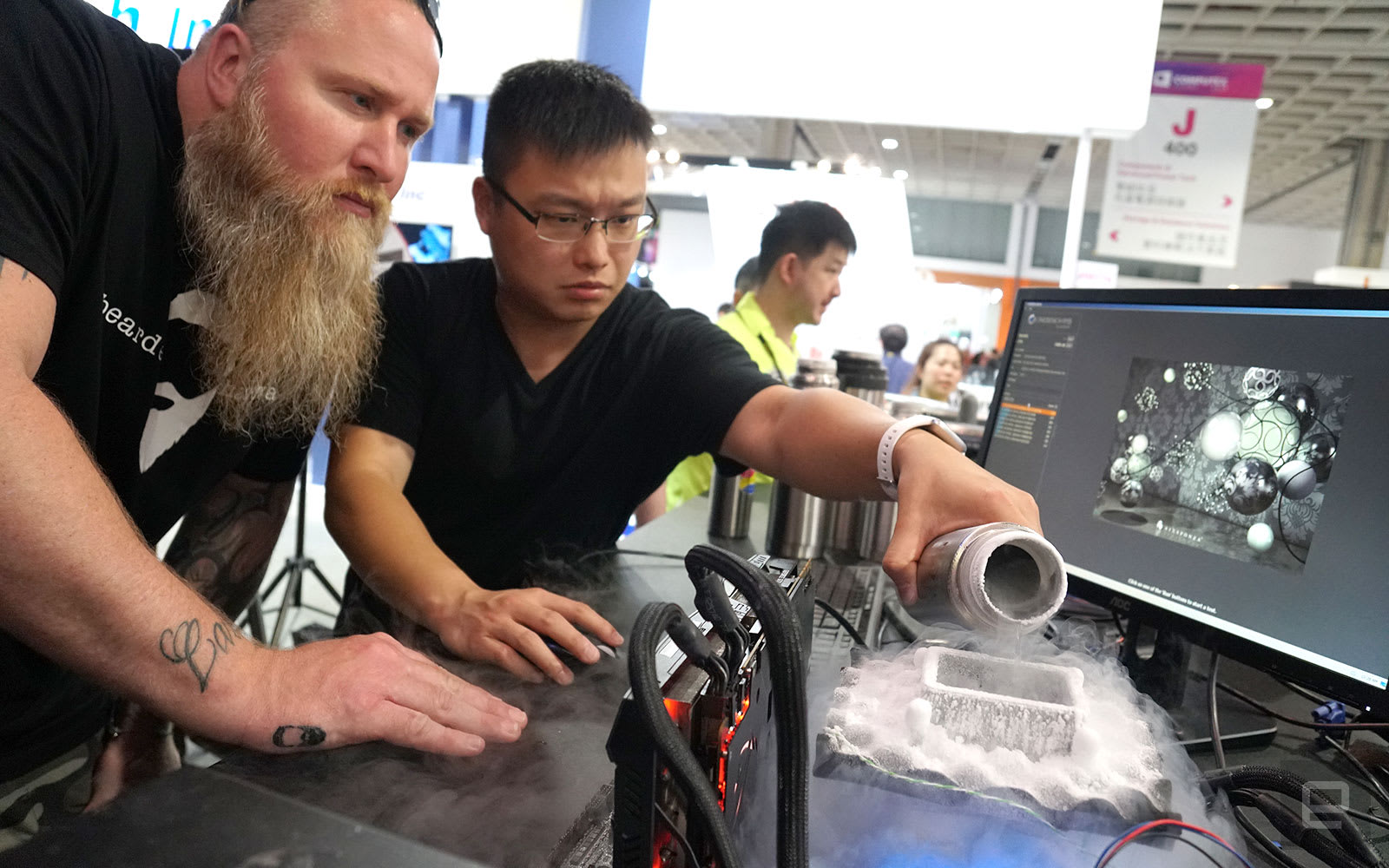 But the benchmark that we cared more about was Cinebench R15, which pushed all 28 cores and 56 threads to run at 100 percent -- as opposed to around 10 percent or less for the CPU-Z validation. That's tough. We even sought help from another top overclocker, Hiva "Hiwa" Pouri, but the PC kept ending up with a blue screen whenever we went beyond 5.5GHz. Dismantling and cleaning the kit didn't help much, either, so we settled with a score of 7,865 cb at 5.5GHz -- not far off from the 8,391 cb (at 5.68GHz) record.

According to Stepongzi, this was really impressive, considering that his i9-7980XE last year reached 5.6GHz on "just" 18 cores, and now we have a similar 5.5GHz speed but on 28 cores. That is to say, Intel has come a long way with the W-3175X's stability when overclocked. Stepongzi added that this easily blows away the i9-9900K, Intel's recent octa-core flagship, in the same benchmarks (though the i9-9900KS announced at Computex should see much improved performance).

Even though we failed to break any record, there are ways to improve our chances in the future. For one, a less humid environment would help a lot. Steponz said he could set up a rig in a dry place, like Las Vegas, and then bench for hours with no ice or vapor potentially affecting performance. The rest is all in the prep details. That, and a bit of luck.