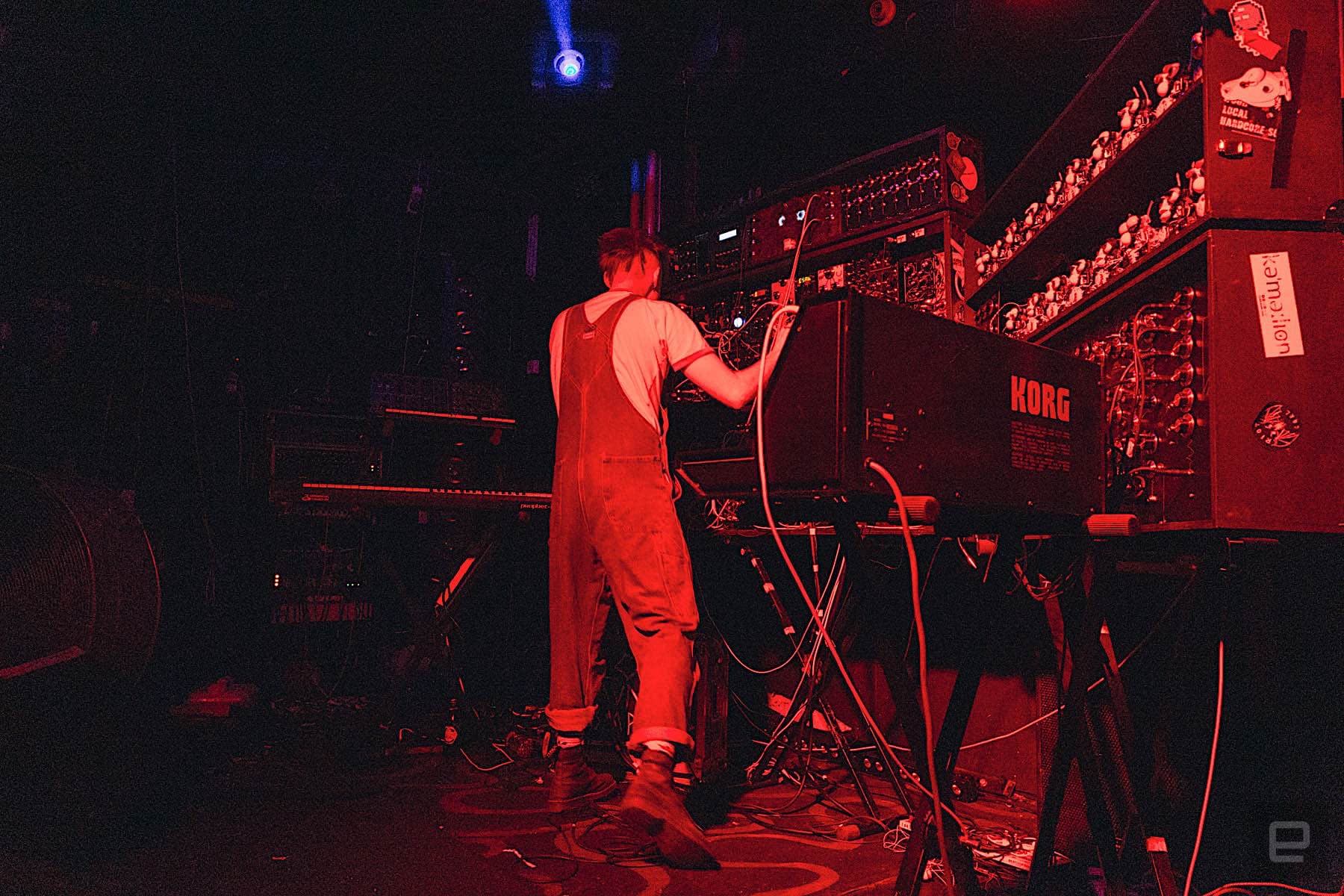 Inside the crazy, musical mind of Look Mum No Computer

How Sam Battle forged a career with Furby organs and synth bikes.

Sam Battle, best known by his musical persona Look Mum No Computer, isn't your average YouTube star. He's built an impressive following not through traditional songwriting or perfectly edited music videos -- though he's adept at both -- but ludicrously ambitious inventions. Over the last few years, Battle has created a creepy but strangely mesmerizing Furby organ, a synthesizer fused with a classic Raleigh Chopper bicycle and a hauntingly beautiful Gameboy Triple Oscillator, which he described online, with refreshing honesty, as "basically three Arduinoboys stuck together."

These homemade projects have racked up millions of views and allowed Battle to launch a small but successful Patreon. He rewards these fans with monthly livestreams, mixtape downloads, invention schematics and the occasional zine.

But it wasn't always this way. The YouTube channel was originally set up for ZIBRA, a band that Battle created with three friends. It was only in 2016, after the group had separated, that he decided to share some solo tracks recorded with his now-trademark musical machines. At first, the short snippets performed better on Facebook. "People seemed to react to it," Battle told Engadget. "They were like, 'This is pretty interesting, this guy is pretty wacky. He's got all this DIY stuff.' And I was like, 'Oh.' It spurred me on a bit [and showed] that maybe there was another avenue that I could take that was more about my real love for [musical] junk and building things."

He kept posting on both platforms and, as the Facebook algorithm changed, found his focus and audience gravitating towards YouTube. On November 6th, 2016, he posted "SYNTH BIKE 2.0 SYNTHESISER LOOK MUM NO COMPUTER VIDEO" and quickly gained close to 100,000 views. A modest total by modern YouTube standards, but his biggest hit on the platform to date. At this stage, Battle was living in a vacant classroom as a property guardian. He was protecting a maintaining a commercial space, essentially, in exchange for dirt-cheap rent and the space required to build and operate his amateur workshop.

For a while, Look Mum No Computer was happy. He lived on relatively little money and devoted as much time as possible to his musical projects. "The most important thing for me was to be bored," he explained. "Not be bored, but, like, a lot of people say, 'You've got too much time on your hands.' But that's not a bad thing. That's a very good thing, because having all this time let my mind wander. It let me create and build things. I spent a lot of time just sitting in my room with no money, building things out of shit."

Battle launched his Patreon in February 2017. It was an experiment, he said, to see if he could finance larger, more ambitious projects. "I was like, 'This is my work. And [Patreon] could work. It would be great because it'll fund all of my machines,'" he said.

He now has more than 1,000 people chipping in every month. "It's a slow-burning thing," he said, "that keeps on going up, which is crazy. The more it goes up, the more it enables me to have time and justify being able to sit down and just build large things."

The inventor has since moved out of London and started renting a separate studio. It's littered with tools, spare parts and half-broken musical instruments that have been donated or bought by Battle on the cheap. The space is a simple but visually stimulating backdrop for all his YouTube videos. The equipment and purposefully unpolished creations reinforce Battle's simple message: if you want to learn electronics, get stuck in. You don't need expensive equipment and shouldn't be afraid of breaking or 'spoiling' any product made by a giant corporation.

Still, the extra YouTube and Patreon money has helped. The infamous Furby organ, for instance, required many charismatic and, for Battle, expensive toys. "It took about a year and a half to get enough Furbies," he said. "Because Furby's are like £10 to 15 [roughly $13- to 19] each. It was quite an expensive one for the time." The investment was worth it, however. The musical monstrosity attracted 3.8 million views on YouTube and countless headlines from both mainstream and niche technology publications. "It was overwhelming," he said. "It was very overwhelming."

"I don't see anybody or the light of day until about midnight. Every single day, seven days a week."

Despite his growing popularity, Battle runs a small operation. He pays a friend, Johnny Goddard, to help with some of the more complicated shoots every month. Otherwise, though, he's a one-man army with a number of responsibilities. He has to research, build and either perform with each instrument or explain how others can build a similar device. Battle then has to edit and upload each video to YouTube, as well as keep track of his monthly Patreon commitments.

The hours are long. "I literally don't do anything else," he said. "I get up between 8AM and 10AM, get to the studio, and then I stay at the studio. I don't see anybody or the light of day until about midnight. Every single day, seven days a week. I love it, but then I look back and go, 'Oh my girlfriend must hate me.'" He pauses for a moment, before adding: "She doesn't though, she supports me. She builds stuff as well, which is relieving!"

Battle is also a musician who uses his online income to fund the occasional tour and justify the time required to both write and record new tracks. He hasn't formally released anything, though, beyond a single called "Groundhog Day." Battle dropped the electro-banger earlier this month and intends to release new music every four weeks moving forward. "I've got a big bank of songs I need to get out," he explained. "But I never know when to put them out. I just don't know."

Look Mum No Computer is in a unique situation. He doesn't have a record deal and, provided his YouTube and Patreon numbers remain stable, might never need to. He's a truly independent artist who can release tracks whenever and however he likes. Songs like "Groundhog Day" expose people to his eccentric invention videos, and vice versa. Like Donald Glover, who works as a writer, actor and musician under the handle Childish Gambino, people like Look Mum No Computer for his quirky personality and imagination. Music, build tutorials and vlogs -- they're simply different ways of consuming and appreciating Battle's dotty work.

The synth-obsessed artist plays into this during his live performances. Look Mum No Computer spends half of his set playing tracks on large custom instruments. The machines face the crowd, which means you only see Battle's back as he bounces between them, pushing buttons and twisting crudely labeled dials. As soon as there's a gap in the track, though -- a particular loop or medley that can run for a couple of bars -- he pivots toward the crowd and howls into a microphone as beads of sweat pour from his scruffy, outlandish haircut.

At the end of every song, though, the performance takes a turn. Battle explains that his machines are breaking down and require constant maintenance during the set. "What a piece of shit!" He says suddenly. "I'm so sorry. Just give us a second!" It's hard to tell how much, if any, of these problems are planned. Regardless, they never seem to faze Battle. And the crowd doesn't seem to mind, either. They laugh and cheer as his creations falter and, sporadically, roar back to life, so he can perform another song. "Have you tried turning it off and on again?" A man in the crowd shouts at one point. Everyone, including Battle, lets out a hoot.

Technical hiccups are normally embarrassing, if not devastating for an artist. But for Look Mum No Computer, they don't seem to matter. If anything, they make the event more memorable. Fans seem to love Battle's on-stage banter, which frequently veers into slapstick-theater comedy, and the unpredictability of his set. For them, it's all entertainment -- a musical-comedic hybrid similar to Flight of the Conchords and The Lonely Island.

Battle has just finished a month-long tour that spanned Germany, Switzerland and the UK. Back in the studio, he will be refocusing on his next big project: The Gameboy Mega Machine. A spiritual successor to the Gameboy Oscillator, it will house 48 handheld consoles and operate as a full, six-voice polyphonic synthesizer. He started the contraption in November and has documented the build in a few vlogs. The process has been a "nightmare," though, which Battle eventually put on hold last month. "It's killing me creatively and financially," he admitted. "But it needs to be built."

"It's killing me creatively and financially. But it needs to be built."

It's another massive undertaking, but one that Look Mum No Computer relishes. He knows that the finished instrument could bring in more viewers and, by extension, increase his income and ability to take on even bigger projects. If he can repeat this process and achieve the impossible again, the bar will be raised even further. "I don't really do anything but this," he explained. "So it all goes back into building stuff."

Battle's career as a musician is unorthodox. But his journey as a content creator is typical. He started with a YouTube channel and slowly learned to diversify with Patreon donations, merchandise and live events. Heck, he's even made content for established brands such as Red Bull. His extremely shareable content and charisma is, admittedly, hard to replicate. The scruffy Brit is proof, though, that you don't have to be an immaculate, Shawn Mendes-style popstar with radio-friendly tunes to make it as a full-time musician in 2019. Sometimes, you just need a video camera and a really crazy idea.