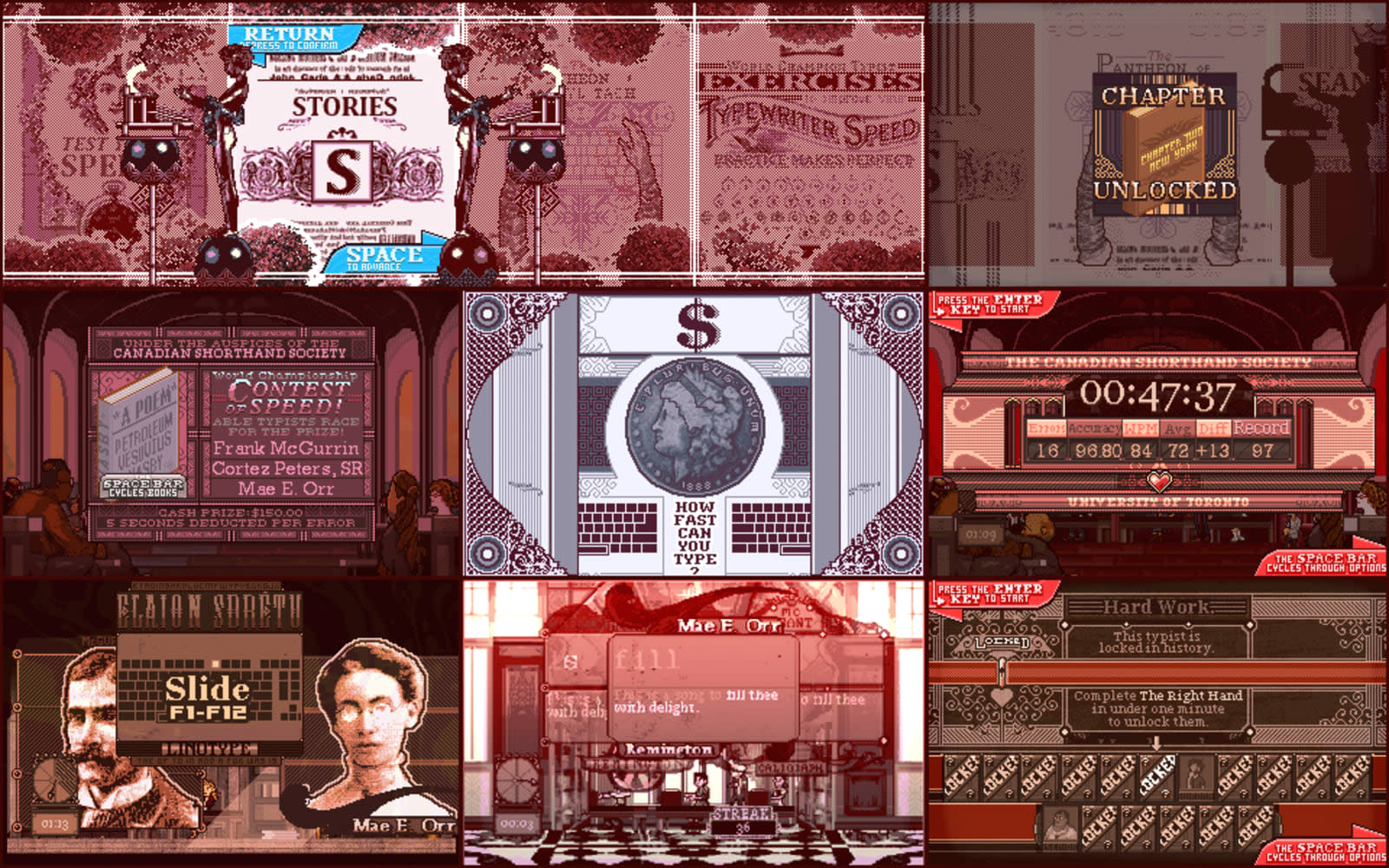 Nine years after 'Cart Life,' the acclaimed indie developer is back.

Richard Hofmeier was an early superstar of modern indie games. In 2010, he released Cart Life, an unassuming, grayscale title that he described as, "a retail simulation for Windows." In actuality, it was a poignant and powerful portrayal of modern existence. Cart Life captured the loneliness, triumphs and hopeless frustration of maintaining friendships, providing for a family and dreaming big in the capitalistic rat race, all tenderly animated in a sharp noir palate.

Cart Life became an underground hit, and then a mainstream success. It landed on Steam in 2012, and in 2013, it was nominated in three categories at the Independent Games Festival Awards, where it battled giants of the day, including Hotline Miami, Kentucky Route Zero, Gone Home and FTL. Cart Life won all three categories. Hofmeier was the first-ever winner of the Excellence in Narrative prize, plus he secured the $5,000 Nuovo award for innovation and the $30,000 Seumas McNally Grand Prize.

And then, he vanished. 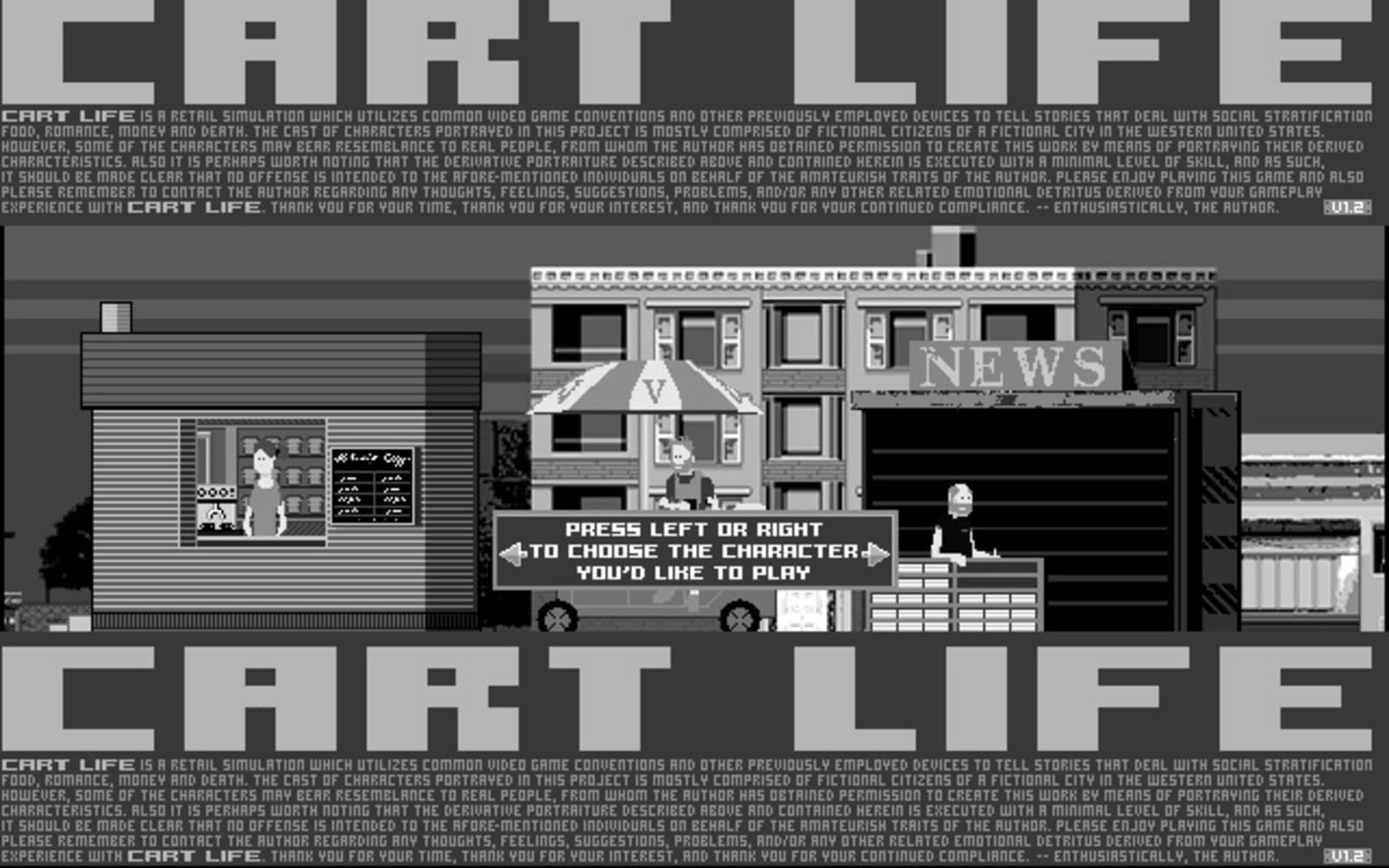 It wasn't exactly overnight, but through the years, Hofmeier faded into the shadows. He was supposedly working on a handful of projects, including a murder-mystery game about humanity's interaction with food called Blood of the Ortolan. Hofmeier said it would come to PC in the weeks following his big win, but it never materialized.

It's been seven years since the release of Cart Life, and six years since Hofmeier became a household name among indie-game fans. In March, he published a game called Type Dreams on indie-distribution hub Itch, his first major release since Cart Life. It's still in development, but the game is rich, witty and played entirely with the keyboard -- players peck out ridiculous, literary and poignant phrases in a frenetic race against history's fastest typers. The keyboard changes with each historical era, meaning players don't always have a backspace key or the luxury of starting a new line with a simple button press. Plus, there's a collection of smut to unlock.

With the in-development, early-access launch of Type Dreams, Hofmeier is stepping a toe out of the indie shadows. The industry has shifted drastically since Cart Life, but his own approach to development hasn't changed.

Hofmeier is still a perfectionist.

I interviewed Hofmeier backstage at the IGF Awards in 2013, minutes after he collected his final trophy. He was smiling yet subdued as PR handlers herded him toward the waiting journalists, simultaneously itching to sit somewhere and wanting to bolt out of the small, black-curtained space. He wore suspenders and a gun harness over his shoulders; he removed both before taking the seat in front of me.

We talked. Hofmeier didn't seem to know what to say, or how to act, but his mouth did the work for him. He was nearly crippled with humility, talking about how great the other nominees were and how out of place he felt in the winner's circle.

"I want it to die, frankly," Hofmeier said backstage. He was talking about Cart Life, his own, award-winning game. "I can't wait for it to die. People keep resuscitating it." 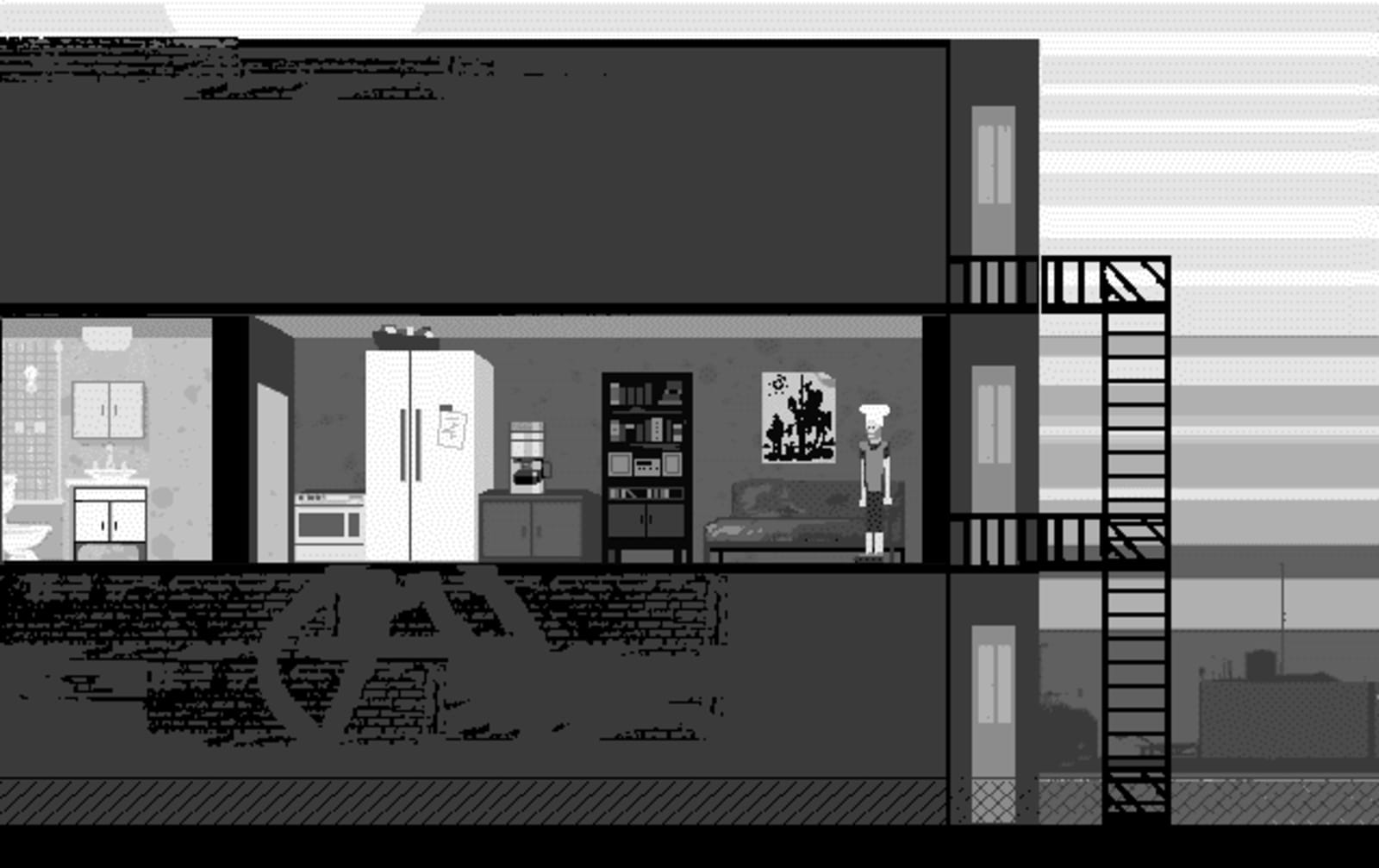 The Hofmeier of today -- 36 years old -- would tell his younger self to take a breath.

"That night was pretty great," he told me over the phone. "I think I was a little distraught when we spoke. It was a -- I don't know. I had a lot of suspicion about that, because it all seemed a little too good to be true, I suppose. I kind of regret, I wish I would have enjoyed it more. But I lightened up afterwards, after the shock dissipated."

When we talked last week, Hofmeier was taking a break from packing up his house in Missoula, Montana, his home town. He was in the process of being evicted; his former roommate had bailed around April Fool's Day and Hofmeier was having trouble keeping up with rent. Type Dreams is on Itch right now only because Hofmeier needed some cash.

"Instead of getting a job at a gas station, or something like that, working as a line cook, I thought well, if this is what I want to do, this is the only time that I don't really feel like I'm working or compromising, or stalling, I might as well give it a chance, at least," Hofmeier said.

Bank, Power Co, Landlord pounding my door and I'm slapping that F1 key like Help Help and hollaring, "Hang on, The Man(s)! I gotta finish these quick revisions before e-uploading this leisure software executable!"

He chose Type Dreams because, out of all of his on-going projects, it was the closest to being done. With the launch of Type Dreams and sales from a hand-crafted deck of cards, Hofmeier now has enough to make up the missed payments, but the legal eviction process had already started.

It's just as well. In the summers, Hofmeier fights wildfires around Missoula, often sleeping in tents near active zones. He's done this, alongside his brother, for the past three seasons; this year, he expects it to start late and go long. He plans on putting his things in storage and spending the summer sleeping on couches, or in a truck, or maybe in an apartment.

"It's good to get dirty, I suppose," he said. "I don't want to talk about it like it's conscience wandering or something. It's not about guilt. The wildfires in my community, in Missoula and Lolo, Montana, where I grew up, they're a serious issue, and it's a nice perspective on politics and budget, and ecology, as well. ... A lot of people here do it, if you're not yourself a firefighter, then you definitely know at least one."

Hofmeier's story as a game developer is odd. It's surprising to hear the creator of a wildly successful indie game has found himself strapped for cash and thrown out of his home just a few years down the line. However, Hofmeier's approach to commercial development is also uncommon.

Cart Life was available to purchase on Steam for a year before Hofmeier unceremoniously removed it and made the entire entire game open source. He published it, for free, on his website in 2014.

"I was in California for the next year's IGF, and I was looking at forum posts and feedback from players, and obviously, it's still got a ton of bugs, and crashes, and little frames and stuff," he said. "And I was thinking, if I'm spending my time on new projects and different games and stuff, it just didn't feel right to continue charging for it."

Steam Early Access launched in March 2013, the same year Hofmeier took home nearly $40,000 at the IGF Awards (and quickly pledged to donate it a non-profit street vendor organization). By 2014, players were still coming around to the idea of paying for in-progress games, so Hofmeier's hesitation and humility weren't completely uncalled-for. However, rather than being driven by outside factors and economic realities, Hofmeier's decision spawned from internal criticism. Cart Life wasn't perfect, so he didn't expect anyone to pay for it.

The same standard applied to other projects Hofmeier started working on. He created a few small games for friends and collaborated with other developers, but the larger ideas ended up falling through. He created a digital version of the strategy board game The Duke and pitched it to the creators; they liked it but wanted something with AI. Hofmeier got lost in the weeds building that system, and eventually, the entire idea fizzled out.

Blood of the Ortolan, which was supposed to come out in mid-2013, has been an itch in the back of Hofmeier's mind that he can't seem to properly scratch. Today, Hofmeier says he has roughly 10 iterations of the game, including a text version and a Unity version created with illustrator Adeline Ducker. She still has a page on her site showcasing the game's concept art, complete with its teasing line, "Do grapes want to be wine?" 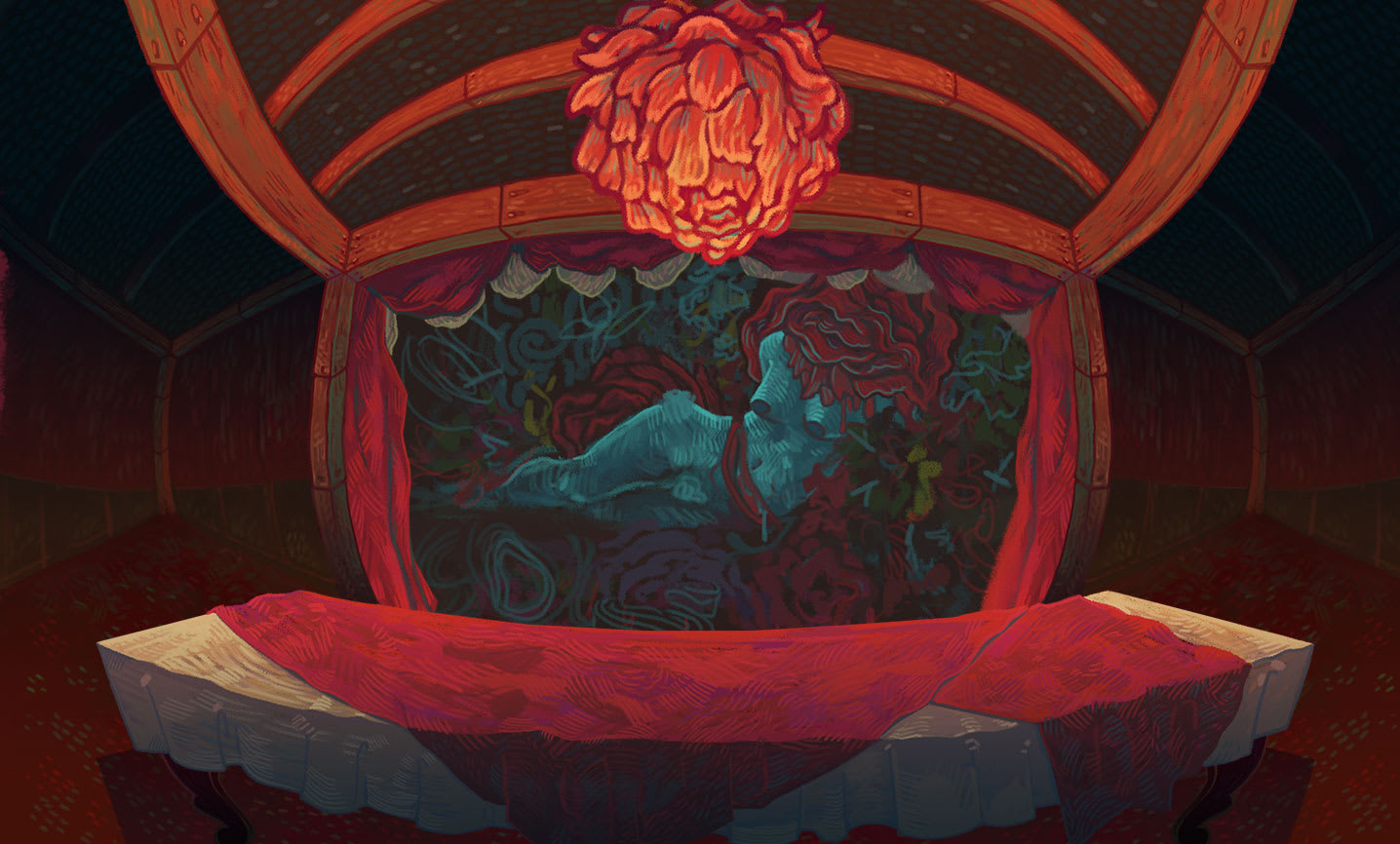 "We had this game mostly done," Hofmeier said. "We did a couple of voiceover sessions in my apartment, and, I don't know how to put it. I got this feeling from showing it to others that it was just really depressing. It's kind of a dark ending, kind of a downer ending. So I kind of put it in the back for a little bit."

This coming from the man who made Cart Life, a searing look at everyday emotional and economic turmoil.

Today, there's Type Dreams, an idea as old as Blood of the Ortolan and Cart Life -- but one that Hofmeier is actually letting the world play. Not because he wants to, necessarily, but because he has to.

"With all of the freedom to revise and scrutinize and analyze continually on a project, like this typing game, I started it around the same time as Cart Life, it started around the same time," he said. "It was one that I sort of put away for a long time and then came back to. But it's also, it's not -- I hate to release it, because it's not exactly where I want it to be."

Perhaps the key, for Hofmeier, is realizing art is never finished. The artist simply stops editing and walks away -- usually with a price tag firmly attached to their work. 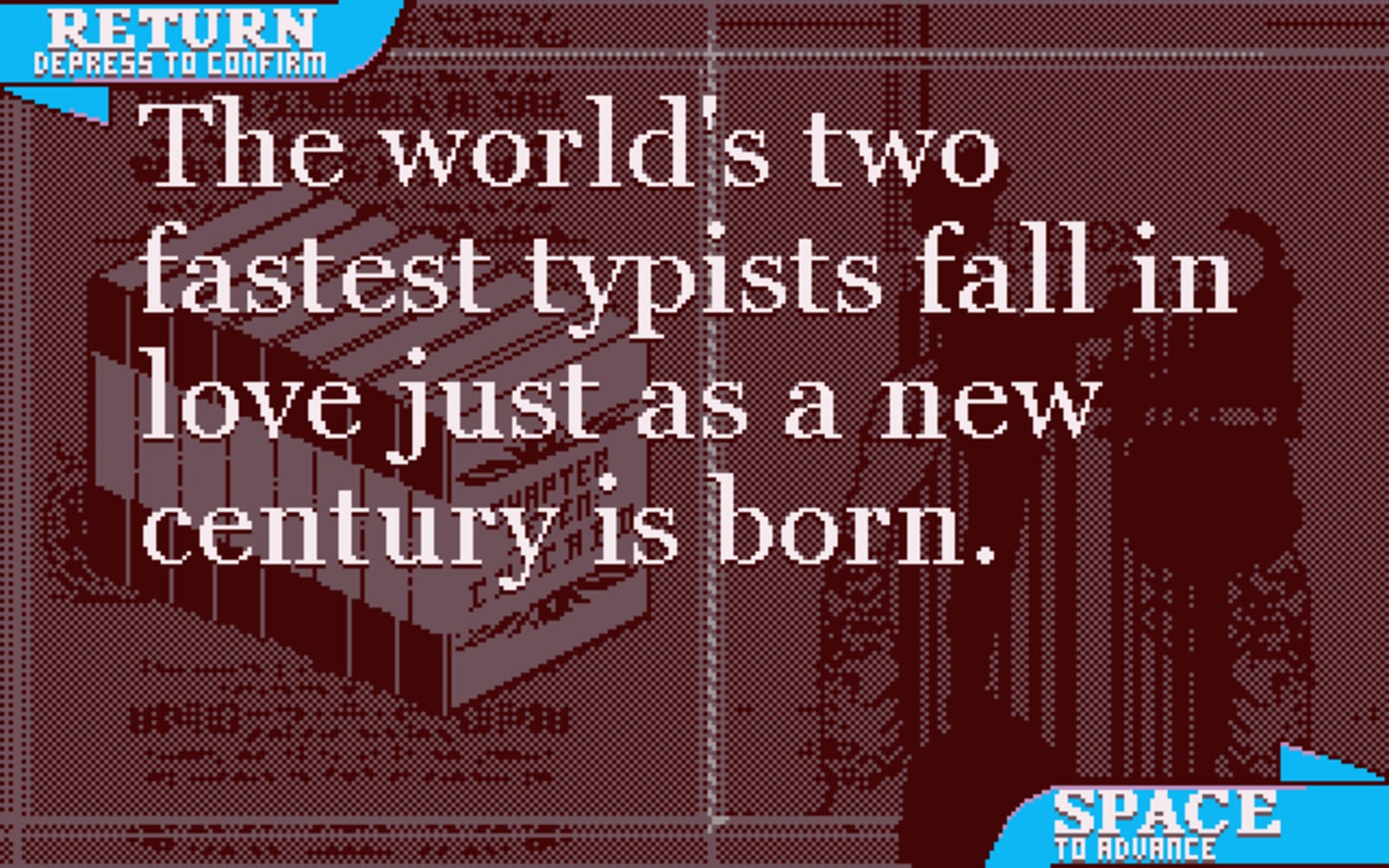 Hofmeier will test out his collected life philosophies in his next endeavors. The early success of Type Dreams proves he can still make a living creating (and, importantly, releasing) games, and he wants to foster an environment where he's constantly collaborating with other people.

"Look at this typing thing, I don't know if it's the right move," Hofmeier said. "I'm trying it out. But everybody who's been willing to contribute a piece of writing, or the music, or art, or whatever, all the contributors will split half of the revenue from the game. I get the other half."

In short, Hofmeier might one day start a studio. Maybe. If the circumstances are perfect.