But it’s not without its quirks.

Jabra shocked the world (OK, maybe just me) in 2018 when it unveiled the Elite 65t true-wireless earbuds. Those headphones quickly shot to the top of a lot of "best of" lists, including a couple of Engadget Buyers Guides. The Elite 65t have dependable controls, solid audio and cost less than much of the competition. For 2019, Jabra is tackling over-ear noise-canceling headphones with the Elite 85h. However, no matter how good they are, they're not as good of a deal at $300.

The world of noise-canceling headphones was dominated by Bose for years. It had the best noise-canceling technology, even if most of us weren't enamored with the company's design choices. Then Sony introduced the 1000X line in 2016, a set of headphones that rivaled the Bose QuietComfort 35 (now QC35 II) in terms of blocking out sound but also delivered high-quality audio. Other companies have caught up to Bose too, and the field is increasingly crowded with legitimate contenders.

Like Sony, Jabra definitely offers a better design on the Elite 85h than the Bose QC35 II. Jabra's latest headphones don't look cheap, even though there was plenty of plastic used to make them. The headband and the outside of the earcups are fabric, which is a nice tactile change from many flagship models. It's a canvas-like material that matches the color of the Elite 85h. But it does have one downside: If you leave them out of the case, dust and other debris stick to it noticeably more than the typical plastic or leather. Those can be easily wiped off, and that's not the case on the Elite 85h. 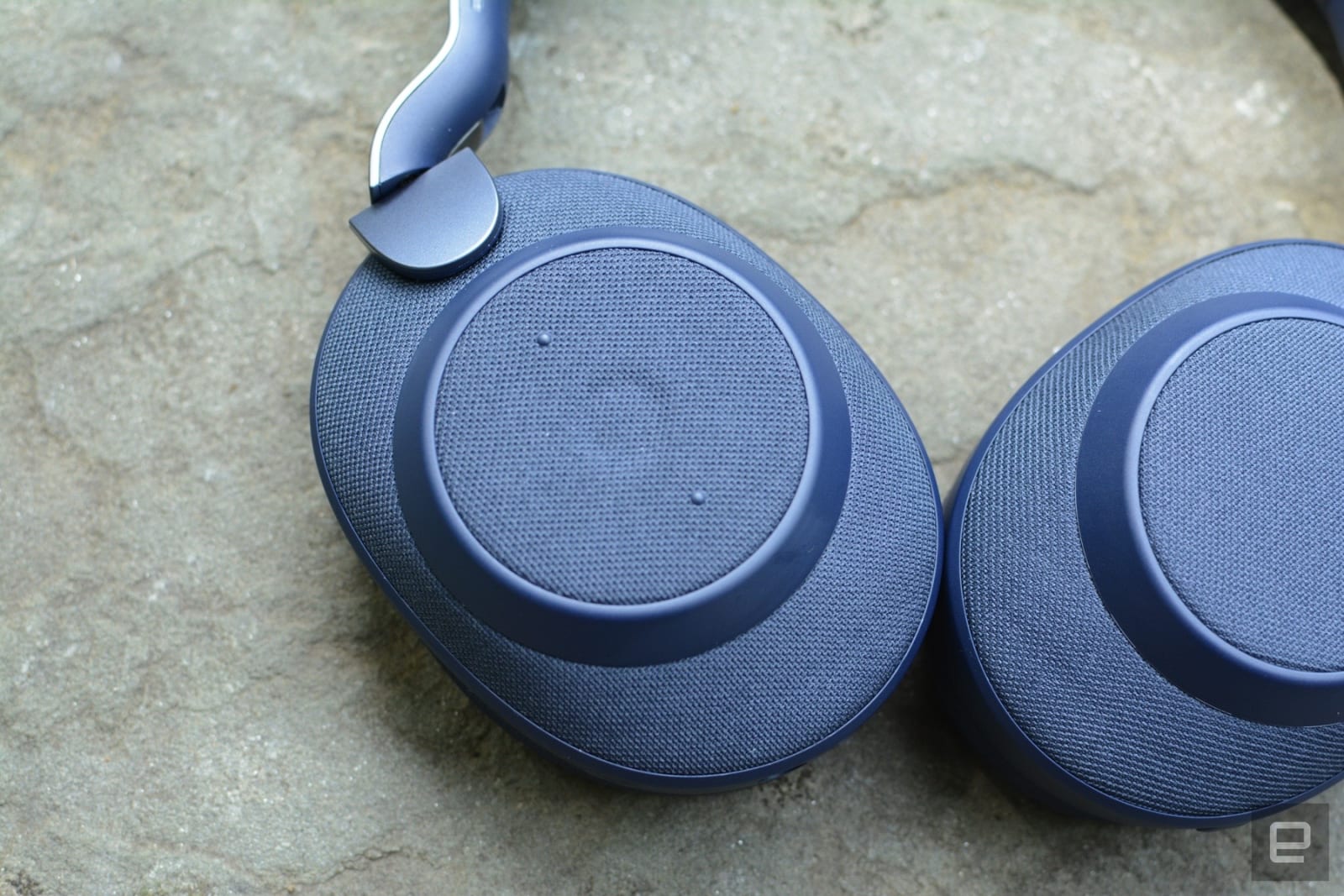 Under the headband is soft, cushiony leather-like material that contributes to stellar comfort. And the portion of the headband that retracts when you adjust it is painted to look like metal. Again, this looks much better than colored plastic, even if it isn't the real thing. The insides of the earcups are also wrapped in leatherette and cushion your head without being too soft you feel the plastic behind them. In other words, they're comfy but still provide adequate support. At 10.4 ounces, the Elite 85h is 2.1 ounces heavier than the QC35 II and 1.5 ounces heavier than Sony's 1000XM3.

Like many over-ear headphones, the earcups on the Jabra Elite 85h rotate flat and fold in for easy storage. That folding motion is also how you turn them on and off, which was super-confusing to start. I spent a few minutes looking for a power switch to turn the headphones off. They automatically came on when I unpacked them and spun the earcups into the proper listening position, so getting started wasn't a problem. Yes, I could've read the directions first, but what's the fun in that?

Most of the controls are on the outside of the right earcup. Here, you'll find three buttons: one in the center for play/pause and receiving calls with one above and one below for volume and skipping tracks. A single press on the two secondary buttons adjusts the volume while a long press skips tracks. A long press on the center button will put the headphones in pairing mode, and if they're already unfolded, it will turn them on. You need that in the event you let the Elite 85h go into sleep mode. There are two more buttons on the rim of each earcup, in the same spot on each side.

On the right, that button activates your virtual assistant with a single press or mutes the microphone during calls with a long press. The 3.5mm jack and USB-C port are located beside this button. On the left earcup, a single press switches between ANC on (active noise cancellation), ANC off and hear-through/transparency modes. With a long press, you can select what Jabra calls "Moments" inside its Sound+ companion app.

Basically, Moments are EQ and noise-cancellation presets that you can enable based on your environment. You can have different settings for your commute, in public and in private. There's a fourth option called "My Moment" that you can adjust how you see fit. And instead of remembering what those were, you can save them for easy access on the headphones themselves, without having to fire up the app to change modes. The headphones themselves can analyze noise to try and detect which location you're in before switching to the appropriate Moment -- a feature called SmartSound. This tool worked for me, for the most part, though a few times it selected "public" instead of "commute." It was much better at gauging when I was in a quiet or "private" setting. Like many features on the Elite 85h, you can turn SmartSound off if you don't want to use it.

Inside the Sound+ app, you can quickly change the ANC mode and adjust the EQ sliders or choose one of six EQ presets. The software will also show you what all the onboard controls do, allow you to change your voice-assistant preference, help you find your headphones if you lose them and more. The Elite 85h offers on-ear detection, a feature that senses whether or not you're wearing the headphones. When active, you can automatically answer calls or resume audio simply by putting them on. It's handy, but Jabra gives you the choice to turn it off completely inside the app.

Unlike some headphones, the EQ tools make a noticeable difference in the tuning. The default sound profile is fine, but you can definitely improve it with the EQ sliders and presets. Or, at least, you can tweak it to fit your taste. After testing all the premade options, I found manually adjusting the curve was best for me: more bass, a little more mid and a touch more treble. With that change, hip-hop, electronic music and metal had the thump it needs without overpowering everything else. I found the sweet spot for things like Com Truise's Persuasion System, Denzel Curry's ZUU and Gojira's Magma. All of which are best served loud and bassy. 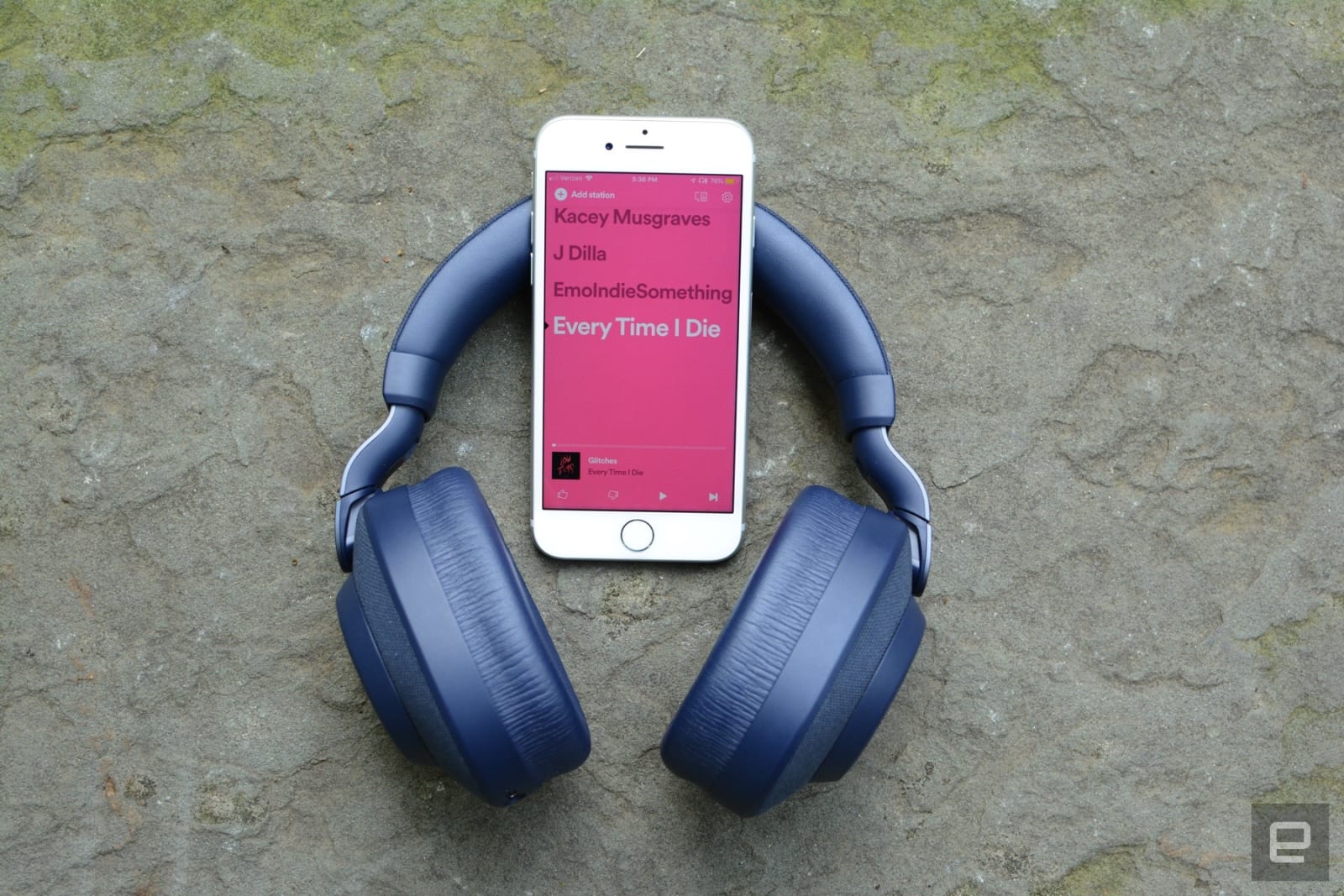 The Elite 85h also handles softer genres like bluegrass well, with a nice clarity and depth to the instrumentation that keeps things from sounding compressed and muddy. With Punch Brothers' All Ashore album and anything with an upright bass, the low end can get boomy if you aren't careful, and I had to adjust the EQ so that it wasn't too overpowering. The default setting is nice for this genre, but the more aggressive styles I mentioned tended to feel flat. It's nice that you can make these changes with the help of an app, but at the same time, you also shouldn't have to. On truly great headphones, the default tuning would handle all genres well.

Jabra promises a whopping 36 hours of battery life with ANC on, six hours more than Sony's 1000XM3 and 16 hours more than Bose's QC35 II. Turn off noise-cancellation and the company says you can expect up to 41 hours between charges. Basically, if you can limit yourself to seven hours a day (lol), you can listen with these all week (five days) before you'll need to charge them. To me, that's ridiculous, and during my tests, I found out just how outrageous it was. Starting with a full charge, I used the Elite 85h for around two-three hours a day for seven days -- with a weekend-long break thrown in. At that point, I still had 85 percent left, according to the Sound+ app. Needless to say, you won't be reaching for that USB-C cable very often. And like many headphones nowadays, the Elite 85h has a quick-charge feature that will give you five hours of use in 15 minutes if you completely run them down.

As I've already mentioned, the two closest competitors to the Elite 85h are the Bose QC35 II and the Sony 1000XM3. They're all the same price at $300 (Bose was $350 at launch), and the noise-cancellation will adequately block out any ambient noise with all three. The deciding factor is overall audio quality, and Sony has the edge there. The 1000XM3 will be a year old in a few months, and Sony could reveal a new model at IFA in early September. The company also has XB900N on the way that looks very similar to the 1000XM3, but with the promise of more bass. Sony has already said the noise-cancellation is different on this XB model, so if blocking out the world is your goal, you might want to wait and see if those are still up to par when they go on sale later this month. I really like the sound profile on the Master & Dynamic MW65, but at $499, it's hard to justify the extra expense, even with its stunning design.

Jabra impressed us last year with a mix of quality and value on the Elite 65t. Those true-wireless earbuds were every bit as good as competitors that cost over $100 more. With the Elite 85h, the company has built another solid set of headphones with amazing battery life and capable ANC. But, the sound quality isn't as good at the Sony 1000XM3. And, other than keeping you away from a charging cable for insane lengths of time, these headphones don't really impress. The trademark SmartSound feature works well for the most part, but I'm not convinced of its necessity. If these were even $50 less than Bose and Sony's flagships, Jabra would have earned my praise yet again. However, at $300, there's not enough here to justify recommending them over the QC35 II or 1000XM3 unless you really need the absurd battery life.

All products recommended by Engadget are selected by our editorial team, independent of our parent company. Some of our stories include affiliate links. If you buy something through one of these links, we may earn an affiliate commission. All prices are correct at the time of publishing.
View All Comments
Jabra Elite 85h review: Noise cancellation to rival Bose and Sony