When Square Enix finally unveiled its big Avengers project, the reception was mixed, to put it politely. While Marvel's Avengers looked appropriately triple-A, all the familiar Avenger heroes looked a little too unfamiliar. The developers have gone for relatively realistic character designs. Unfortunately for them, we've seen truly "realistic" Avengers already, courtesy of the Marvel Cinematic Universe (MCU). This means that the in-game Avengers lineup looks more like a group of cosplayers acting out their fantasies. It also wasn't entirely clear from the initial trailer exactly what kind of game Marvel's Avengers will be.

Behind closed doors at E3, however, the team walked me through a gameplay demo that demonstrated what Marvel's Avengers is. If you're expecting cinematic set pieces, superhero quips, fluid combat and plenty of goons to punch and blast, you'll get all of that.

But why am I still so worried about this game? 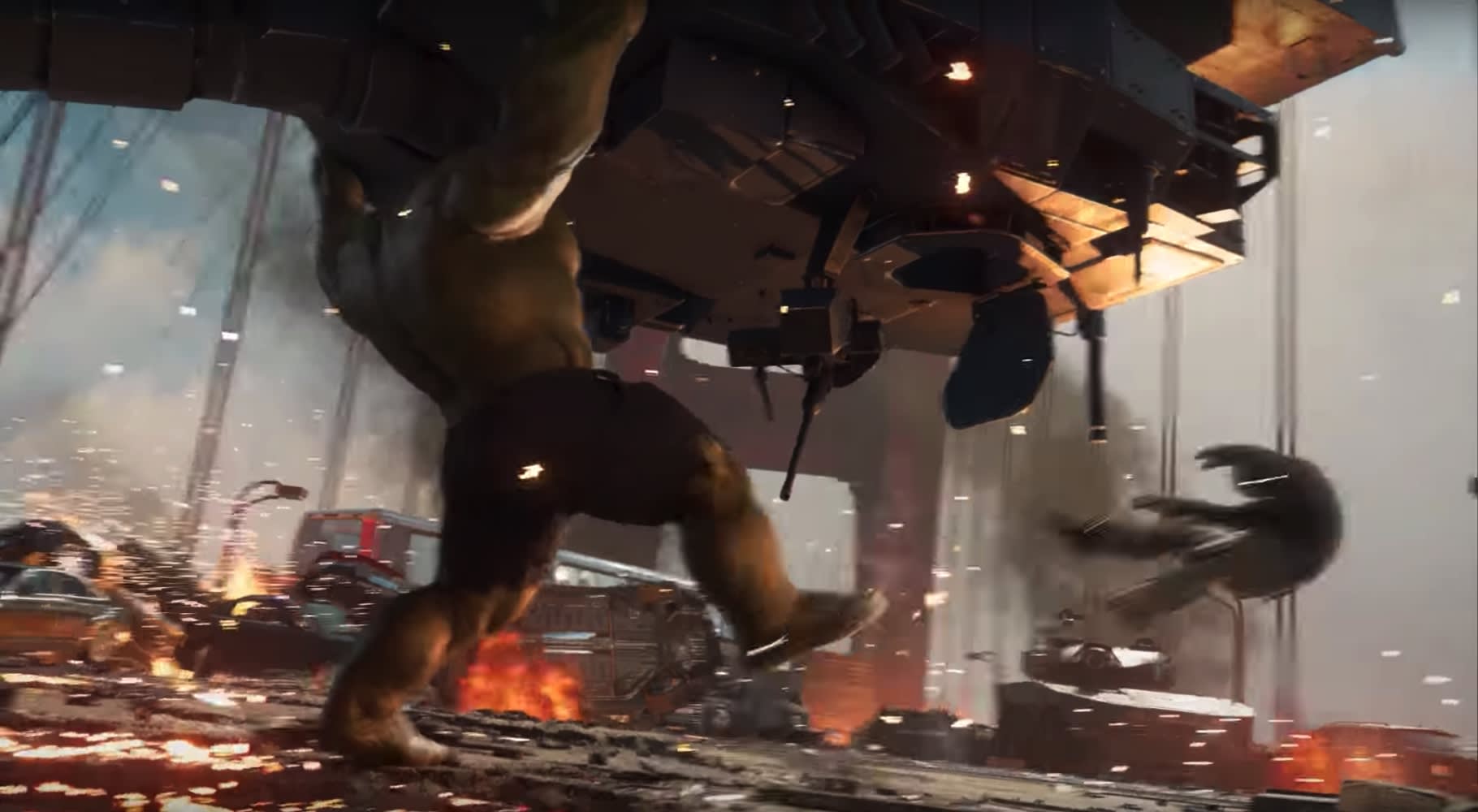 Our 20-minute hands-off demo came from very early on in the game. Some nefarious actors strike against a celebration day for earth's greatest heroes; Bombs go off across the Golden Gate Bridge; Iron Man and Thor are first on the scene.

At the same time, Captain America is aboard the SHIELD heli-carrier, as the floating base struggles to maintain altitude and something big, sinister and glowing appears in the water below. The setup is great: multiple threats, being addressed by multiple Avengers. It all feels very Marvel. It's exciting. This gameplay demo delivers the sense of scale that Rich Briggs, Senior Brand Director, called "an epic ride that you'd get from any Marvel experience. Iconic."

The gameplay demo then ran through several battle scenes for each Avenger. Thor combines hammer throws with hard-hitting slams and punches. One of his super moves (we didn't get all the details on how skills will overlap or cool down) rains thunder down on enemies and seems to add an extra charge to his attack. The god can also float in the air when needed, although it doesn't seem like he can fly outright during the fights we saw. Hammer throws (and subsequent returns) will look familiar to anyone who played with Kratos' frozen ax in the latest God of War -- Vince Napoli, responsible for the ax's implementation there, is Lead Combat Designer for Avengers. It's some strong action game pedigree. Captain America's moments fighting invaders also feel energetic and enjoyable, with plenty of combos, defensive maneuvers and fight choreography that seems clipped straight from the movies. 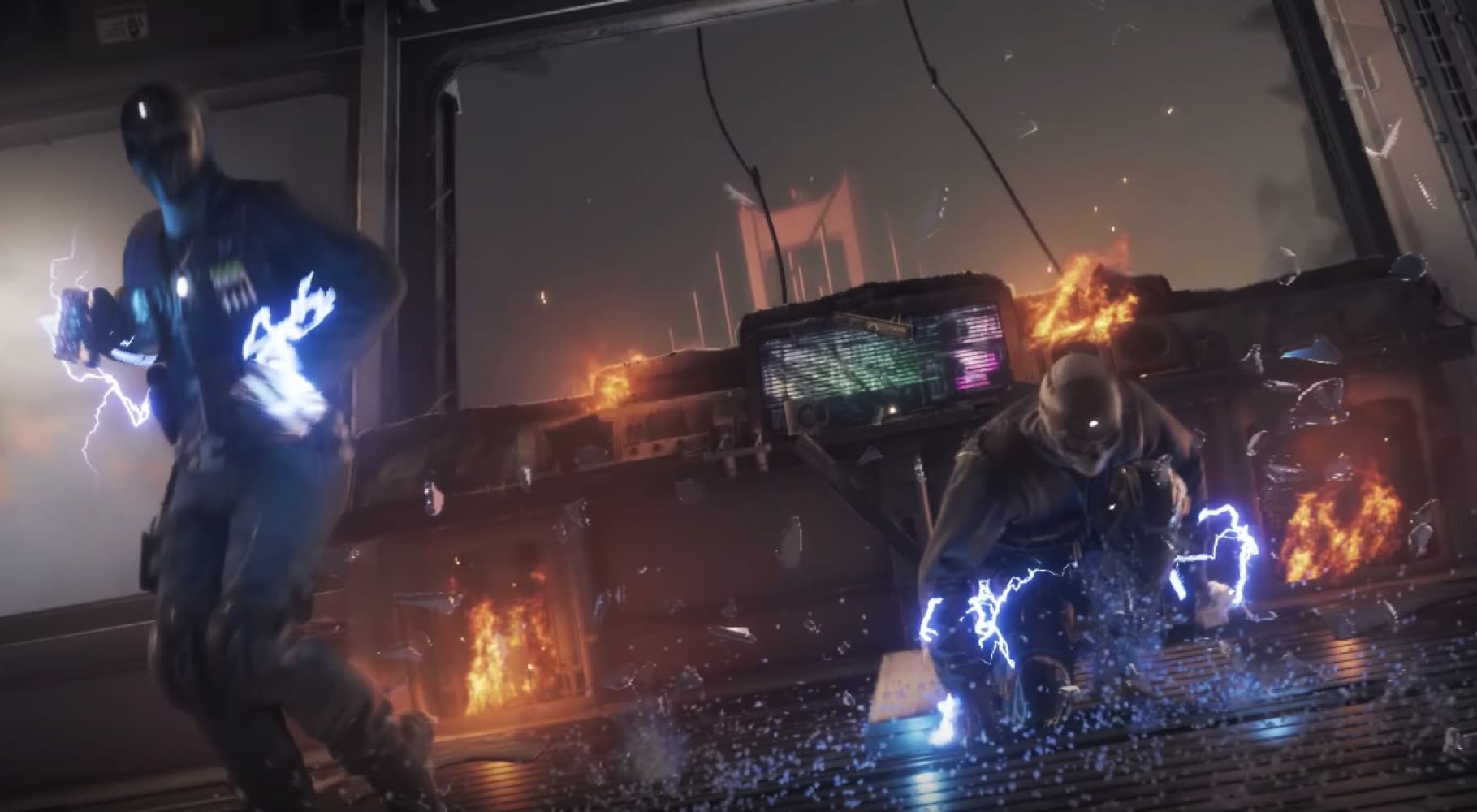 Enemies approach in waves and appear easily dispatched by whichever hero you're in control of. It made me wonder: Where's the jeopardy? I know there's a health bar but I'm waiting to see how the game will balance out heroes' varying vulnerabilities. Thor can take a bus thrown at him. Black Widow can't.

After showcasing a few of Thor's attack combos, including lift attacks that left some enemies helpless mid-air, the game switched to Iron Man and an in-flight shooting segment, as the hero chased and shot down a few drones and flying enemies. It's entirely different to the rest of the hero segments shown in the demo, and in fact, Iron Man's more traditional action brawling segment seemed the tamest, floating around, peppering enemies and turrets with rockets and beam attacks.

Hulk bounds in next, with his typical smashing antics. He can grab smaller enemies, throwing them and swinging them to attack others. but with some added traversal mechanics as he climbed across walls and leaped around platforms. It's hard to tell from this hands-off demo whether there's any threat of instant death if you miss a platform, and even if you did, surely Hulk can survive such things, right? Would Captain America?

According to Napoli: "We're not just gonna give Hulk [level] powers to everyone. The ability to weaponize the enemy [slamming foes into each other] is an example of how a character's uniqueness builds out the gameplay." Surely an indestructible Hulk could be a little game-breaking, if true to the comics and movies?

Finally, Black Widow turned up to face what appears to be this segment's boss, a Marvel villain called Taskmaster. Her fighting style seems the best tease of skill load-outs and how you'll be able to customize a character inside the game. When Marvel's Avengers does eventually arrive, there will apparently be a large degree of skill assignments and skin customizations to make your heroes into who you want them to be.

In Black Widow's case, we saw her combine melee attacks alongside her (MCU) trademark grapple attack (legs around the neck, and swing), dual pistols, electrified batons and, eventually, a neat stealth camo option which presumably acts as her unique special attack.

Watching the Black Widow segment offered the best insight we have into how play styles might differ between heroes. Her stealth and agility seem to have a very direct impact on how she will play -- and given the much teased cooperative mode coming to Avengers, I still have a lot of questions as to how this will play out in-game. Will the entire game dynamically switch between heroes' set-pieces? How will they gel together? Will you ever fight in the same area, with your friends' heroes?

According to Rich Briggs, the team started with the Avenger's abilities and worked outwards: "We need to make these characters the way they want them to play."

That might be why the game is still a little difficult to explain in simple terms. The short gameplay demo suggests an arcade-style action brawler, but at the same time, there are the quick-time events for major attacks from the heroes and during some scene transitions. There's the Iron Man on-the-rail shooter parts, platform traversing with the Hulk and a focused boss battle with Black Widow. There's a lot of moving parts here, and perhaps naturally, some of them felt a little hollow.

The project is the combined effort of several studios, including the talent behind Tomb Raider (Crystal Dynamics) and Deus Ex (Eidos) as well as Crystal Northwest, and Nixxes Software. Collectively, they still have close to a year to allay fears and make this work. If they get it right, this could be the blockbuster game that the Avengers phenomenon deserves. If not, it will be an expensive mistake for everyone involved.