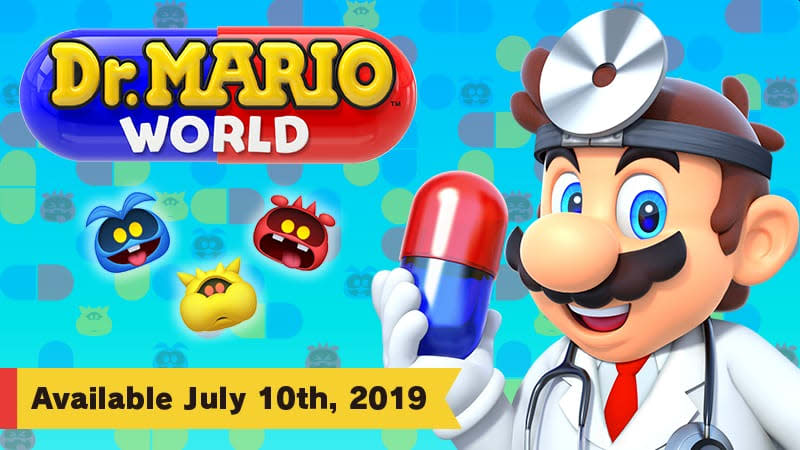 Earlier this year Nintendo announced that its Dr. Mario puzzle game would return in a new iteration for mobile devices, and now Dr. Mario World has a release date: July 10th. Set to appear on Android and iOS (and available for pre-order via either of those links), it's a free-to-play game with stages where you can either send or receive hearts to other players to exchange extra stamina, or battle online in versus mode.

As one would expect, the goal is to eliminate viruses by aligning them with similarly-colored capsules. The different stages present new challenges, and players have a limited number of capsules. The part that costs money are optional "diamonds" that players can cash in for items, restore stamina or purchase new doctors with special skills instead of waiting for stamina to recover over time or to earn them in gameplay with coins.

#DrMarioWorld launches for iOS and Android devices on 7/10! Follow the official @DrMarioWorld_EN account to stay up to date on all the latest news, and pre-register today!

In this article: android, Dr. Mario, Dr. Mario World, free-to-play, gaming, ios, mobile, mobile gaming, nintendo
All products recommended by Engadget are selected by our editorial team, independent of our parent company. Some of our stories include affiliate links. If you buy something through one of these links, we may earn an affiliate commission.