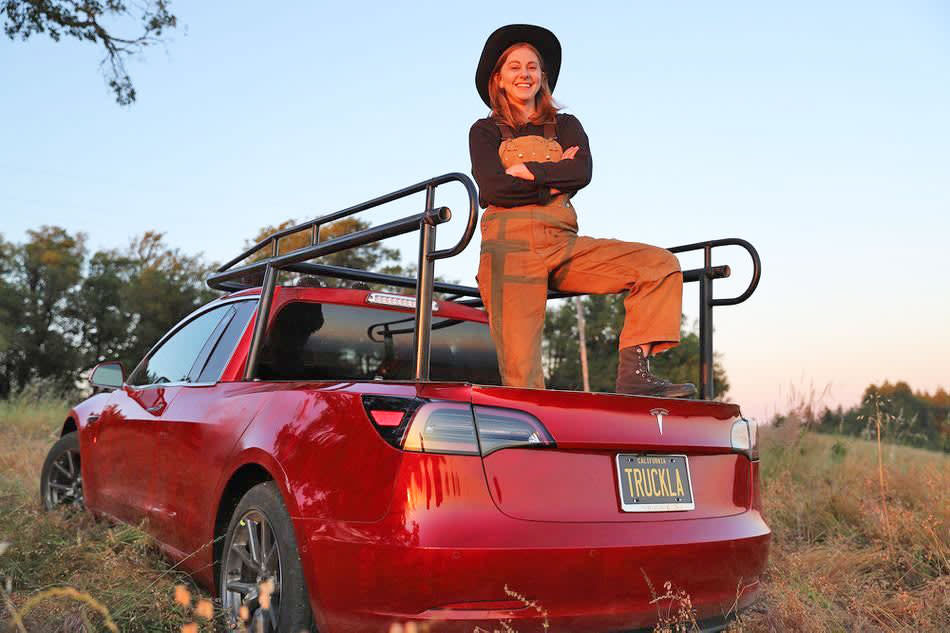 Why wait on Elon Musk to deliver your perfect vehicle when you can just make one yourself? YouTuber and inventor Simone Giertz needed a truck to carry materials for her creations, but didn't want a gas-guzzling pickup. So the 28-year-old robotics enthusiast decided to buy herself a brand spanking new Tesla Model 3, carve out the back seat and the trunk, and perform a bunch of other modifications to the $35,000 vehicle that would make most car junkies squirm. She then, of course, documented the entire messy process in a 31-minute YouTube video.

"The truck itself is going to be great, but the process is going to be scrappy AF," explained Giertz in the video. A scrappy approach is Giertz's claim to fame. If you're unfamiliar with Giertz or her past inventions, the self-proclaimed "Queen of Shitty Robots" is not known for her elegant, seamless designs. The innovator's past projects include an alarm clock that slaps you in the face and a helmet that brushes your teeth.

But rest assured, the Tesla-to-truck conversion was a year in the making -- and a collaborative effort. Giertz worked with mechanic Marco Ramirez, designer Laura Kampf and Tesla rebuild specialist Richard Benoit to build the electric truck of her dreams. The team essentially hacked off the back of the Tesla 3, removing the back passenger seats to make room for a truck bed. The end-result looks more like a Chevy El Camino than a pickup truck, but it'll get the job done for Giertz.

In the video, Giertz challenges Tesla founder Elon Musk to make the Tesla pickup truck, a long-awaited fantasy item of many Tesla devotees. Coincidentally, Musk announced plans for the Tesla pickup truck at the company's shareholders meeting. The inventor said the vehicle would have a "cyberpunk design" and look like it hailed from a "sci-fi" movie. But unlike Giertz's "Truckla," it won't be a labor of love.

You can view Giertz's video that documents the process of converting her Tesla Model 3 into a truck below.

In this article: electric trucks, elon musk, gear, google, simone giertz, tesla, Tesla Model 3, transportation
All products recommended by Engadget are selected by our editorial team, independent of our parent company. Some of our stories include affiliate links. If you buy something through one of these links, we may earn an affiliate commission.