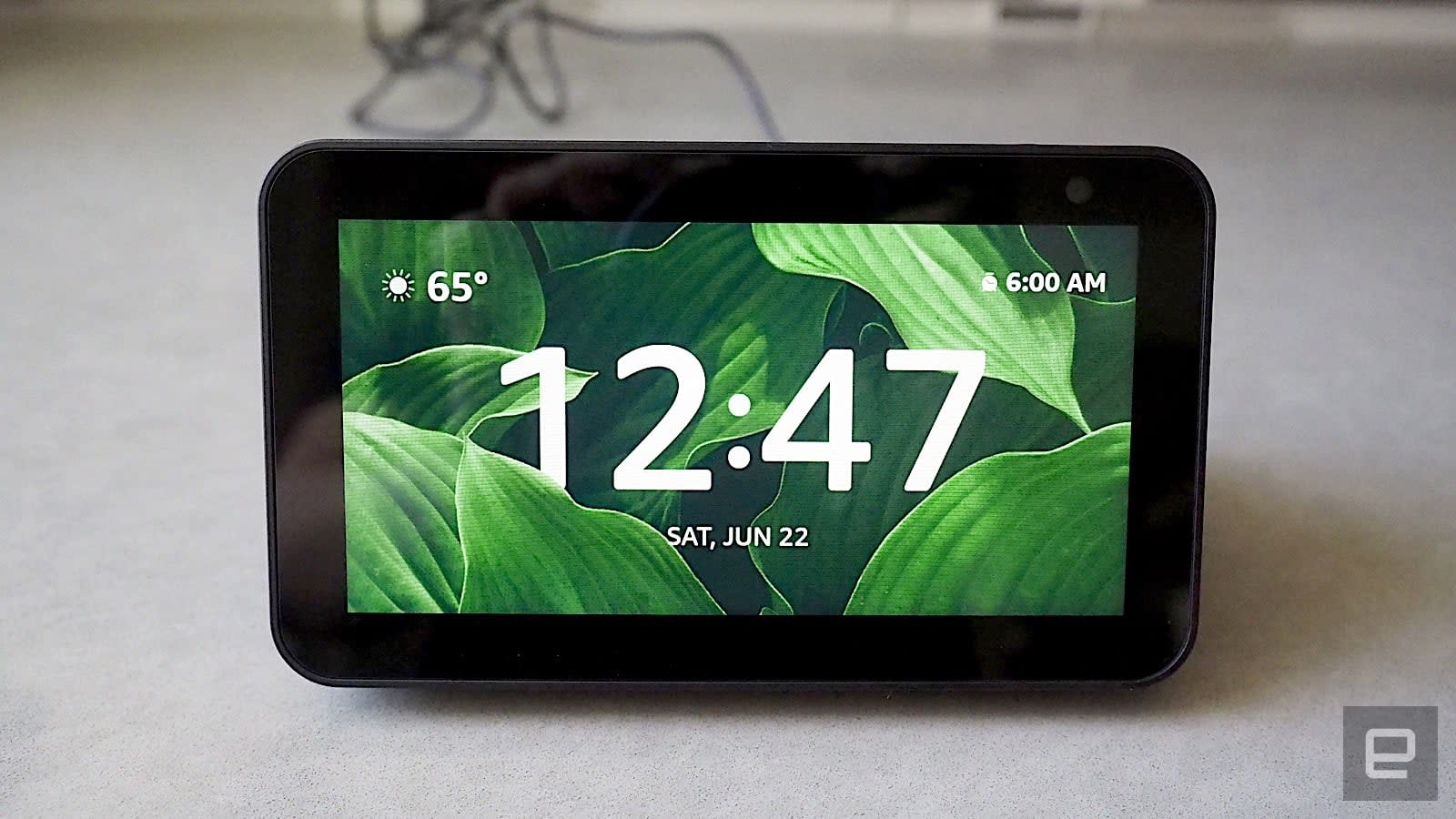 When Amazon introduced the second-gen Echo Show display last year, it was a huge upgrade over the original, with a built-in browser, better sound and more video options than before. Just months later, however, and Amazon has released a new model called the Echo Show 5 (In case that's confusing, the "5" refers to the screen size, much like how Amazon names its Fire tablets).

That might seem odd, but the Echo Show 5 isn't meant to replace the larger Show; it's a smaller version designed for desks and nightstands. Think of it as a squarer, reimagined Echo Spot that doubles as competition for Google's Nest Hub (and, in a way, the Lenovo Smart Clock). It's not perfect by any means, but for those who want a smaller, sleeker Amazon smart display that's also a decent alarm clock, the Echo Show 5 might be it.

If you zapped the 2018 Echo Show with a shrink ray, you'd probably end up with something very similar to the Echo Show 5. It has the same look and feel, with a screen dominating the front and the fabric-wrapped speaker housed in the back. Unlike the larger Show, however, the Echo Show 5 comes in both white ("Sandstone") and black ("Charcoal"), so you can pick one that better suits your home decor. The Show 5's small stature also reminds me of the Lenovo Smart Clock, with similar alarm clock aesthetics.

That's not the only way the Echo Show 5 is reminiscent of the Lenovo Smart Clock. Like the latter, the Echo Show 5 comes with several clock faces and you can smack the top of it to snooze the alarm. There's also a similar sunrise feature, where the display slowly brightens fifteen minutes prior to the set time to mimic the effects of daylight's arrival. The sunrise alarm on the Echo Show 5 is a little unusual however, because it only works when you set the alarm between 4 and 9 a.m. I suppose that's understandable given that's usually when natural sunrise occurs, but I thought the whole point of having a "sunrise alarm" is that it works at all hours, and not just at the appropriate times.

Much like the Smart Clock and Google's Nest Hub, the Echo Show 5 has an ambient light sensor that automatically adjusts the screen's brightness according to its surroundings. Seeing as the Show 5 can be used as an alarm clock, I appreciate that the screen goes dark at night, making it easier to fall asleep. 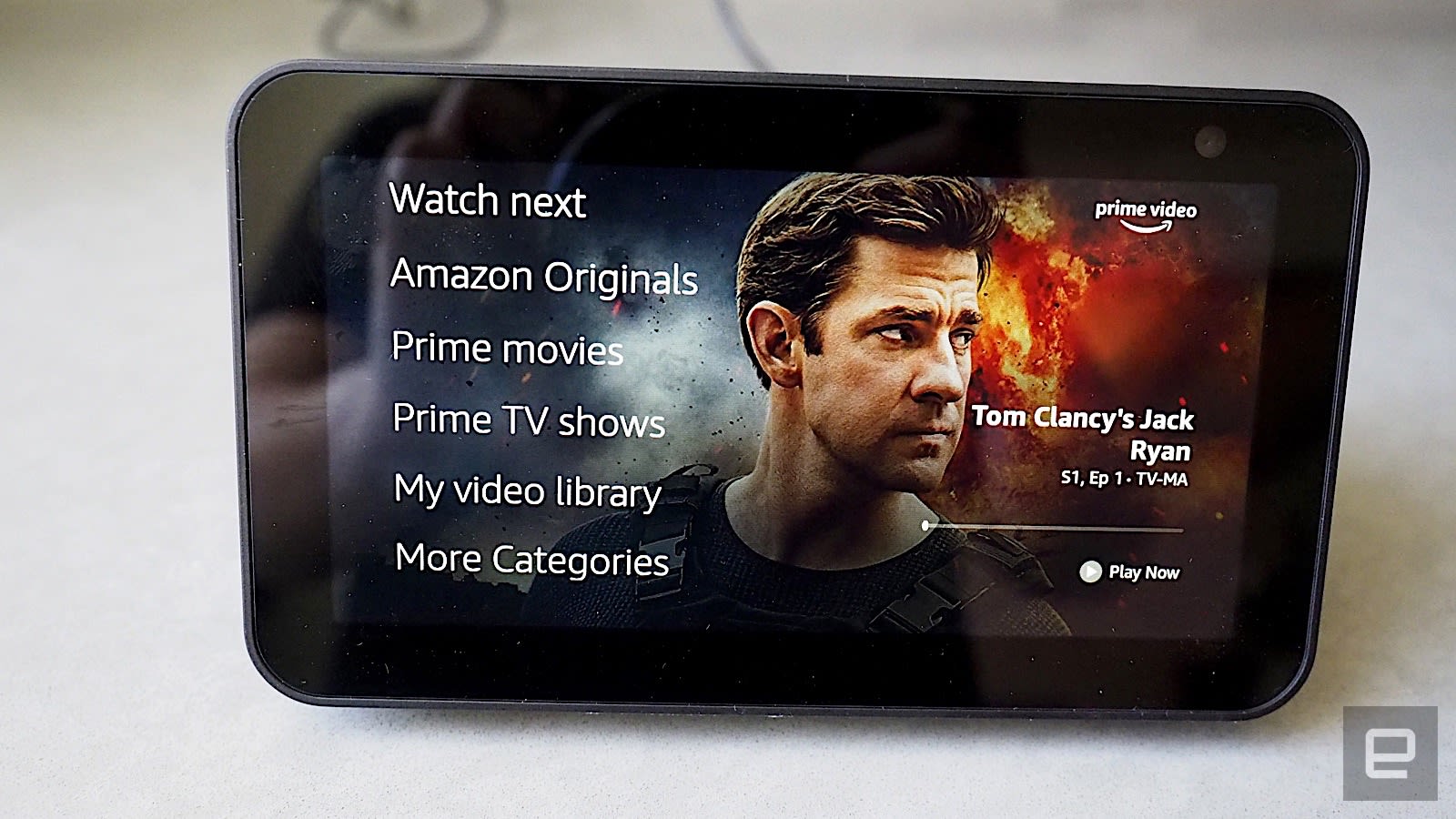 While the Echo Show 5 may have a lot of the clock-centric features, it's still primarily a smart display; its 5.5-inch screen is certainly a lot bigger than the 3-incher on the Smart Clock. That, along with its 960 by 480 resolution, makes the Echo Show 5 much better suited for photos and video. Images look colorful enough, and I enjoyed watching videos on it despite the small screen. I do think it's a little too tiny for watching longer videos like movies and TV shows, but it was fine for short news clips and music videos. As with other Alexa smart displays, the Echo Show 5 supports video from Amazon Prime, NBC and Hulu. You can also watch YouTube videos via the built-in Silk or Firefox browsers (though it's not as integrated as the YouTube experience on Google's smart displays) and step-by-step cooking videos from sources like SideChef and AllRecipes. Amazon also recently added how-to clips from WikiHow, so you can watch instructional videos like how to open a tight jar, for example.

That said, I still think Google's Nest Hub is a much better choice for displaying photos. Not only is the screen bigger at 7-inches, it's also easier to use. With the Echo Show, I have to go through Settings, Home & Clock, Clock, and Personal Photos so that I could pick my preferred source of images (either the Alexa App, Amazon Photos or my Facebook account). With the Nest Hub, on the other hand, I can pick my Google Photos album with just a few taps in the app. Google's machine-learning algorithms are even smart enough to automatically compile albums of my favorite people and pets while leaving out embarrassing shots and duplicate photos.

Additionally, I like how Google's smart display puts my photos at the forefront without me having to do anything. On the Echo Show, I had to dig through Settings in order to shut off the suggested Trending Topics and Alexa Tips that would otherwise clutter the screen by default. Of course, this is a personal preference -- you might love seeing news headlines all the time -- but I would rather my smart display be a digital photo frame than a depressing news source. 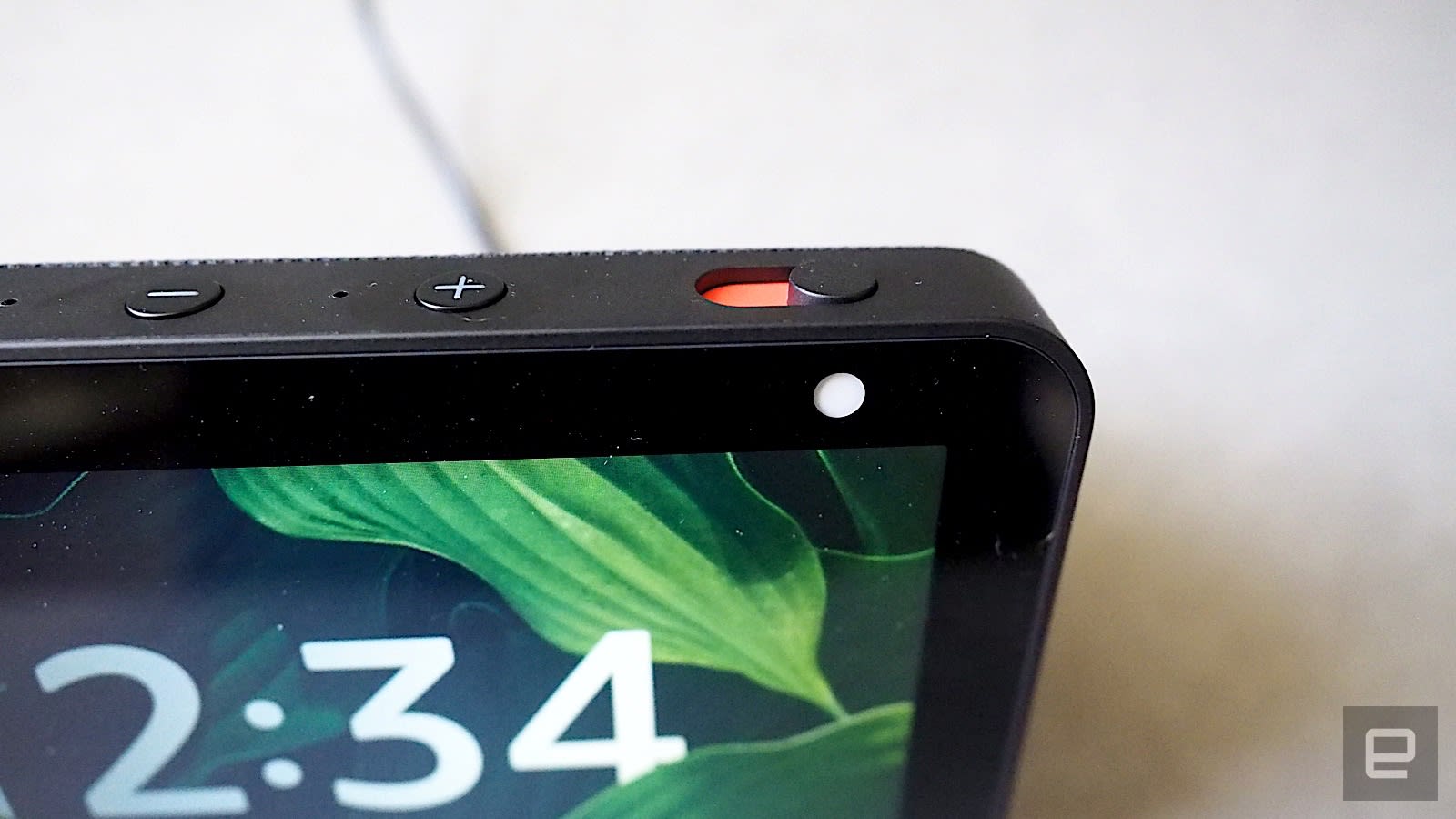 One of the reasons I liked the Nest Hub was its lack of camera; it made me a lot more comfortable having it by my bedside. But even though the Echo Show 5 is meant for personal spaces like the desk and the nightstand, it still has a front-facing camera lens meant for video calls. Unlike its predecessors however, the Echo Show 5 does at least come with a physical camera shutter -- the larger Echo Show and the Echo Spot only have electronic ones. That physical shutter makes me feel a little better about having the Echo Show 5 in my bedroom, but not everyone will feel that way. After all, it's easy to forget to slide that toggle, and it's something that you have to always be mindful of.

Aside from the camera shutter, the Echo Show 5 also has a microphone mute button and a couple of volume controls on the top. Packed inside it is a 1-watt speaker, which emits surprisingly impressive sound for such a tiny device. The bass packs a powerful punch and vocals are beautifully crisp and clear. You have the option of adding additional speakers via a 3.5mm audio jack or stereo Bluetooth, but honestly, I don't think you'll need it.

The Echo Show 5 also features a new Alexa smart display dashboard, which you can reveal by swiping left from the far-right of the screen. The dashboard has six shortcuts to frequently-used skill categories: Communicate (which leads to video calls), Music, Alarms, Video, Smart Home and Skills & Game (the last one is simply a list of popular skill categories). 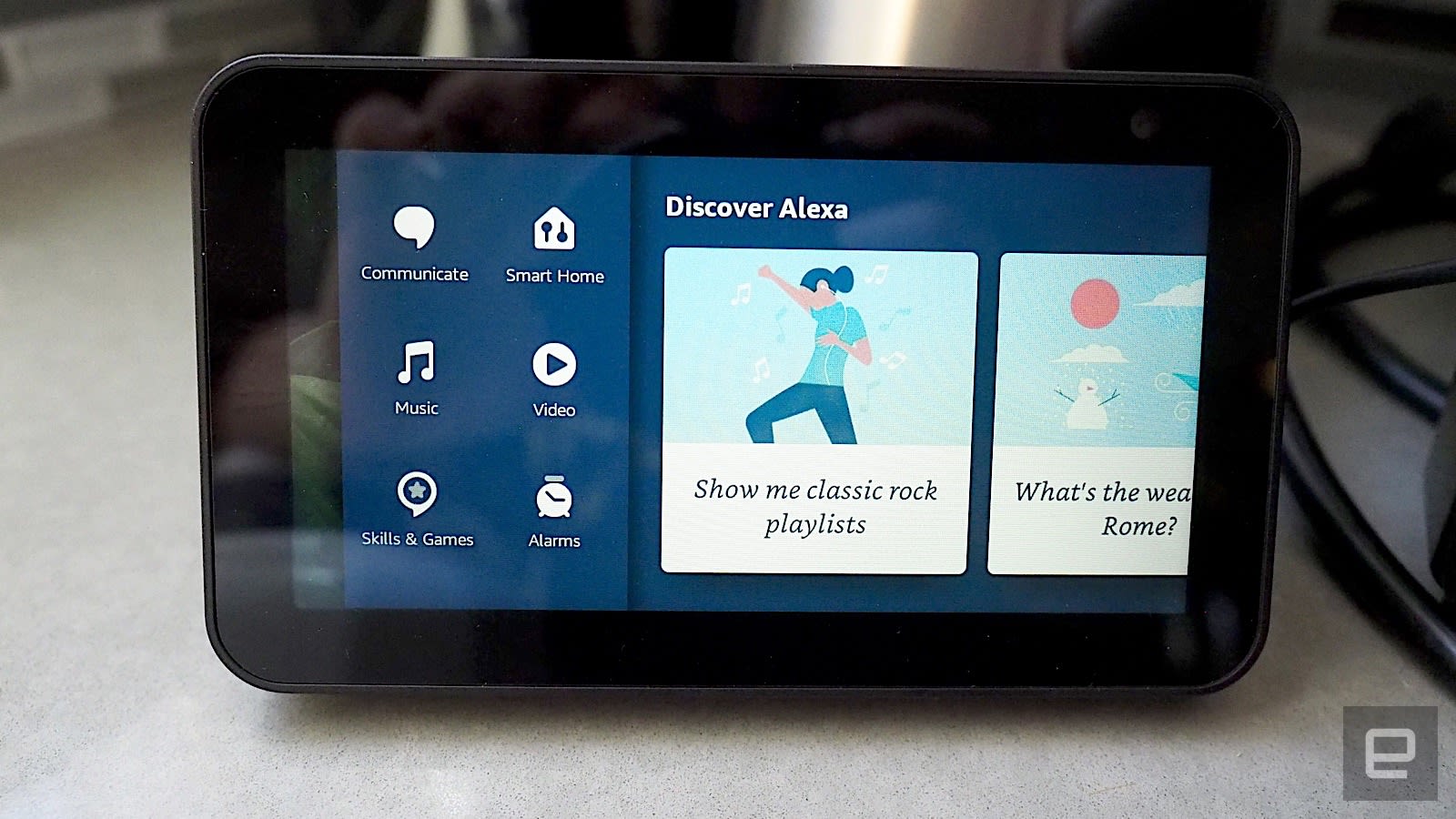 I ended up using the Smart Home shortcut quite a bit, as it brings up a dashboard of all my connected smart devices like webcams and smart lights. I also plugged in my coffee maker to an Amazon Smart Plug, thus transforming it into a "smart" appliance that I can enable right from the Echo Show. Starting my coffee maker while I was still in bed felt like I was living in the future. It's worth noting here that though the Echo Show 5 does work with the Nest video doorbell, you can't have two-way conversations with them. According to Amazon, the company will work with any developer that implements its two-way API. Right now, that includes Amazon's Ring and Cloud Cams, plus August's doorbell cameras, but not anything from Nest.

The rest of the Echo Show 5's features are pretty much the same as previous Alexa products. I used Alexa to get the weather forecast, check on the latest sports scores, add items to a shopping list and schedule events on my calendar. I also tried out a couple of Alexa Routines, like "Start My Day," which tells me the day's temperature, the current traffic conditions, and the daily headlines. Telling Alexa "Goodnight," on the other hand, shuts off all the smart lights.

One especially notable feature of the Echo Show 5 is its price. The 2018 Echo Show is $230, the Echo Spot is $130, but the new Echo Show 5 is only $90, making it the cheapest of the three. It's also more affordable than the Google Nest Hub, which retails for $130. The Echo Show 5 is about $10 more than the Lenovo Smart Clock, but it's also an actual smart display (rather than just a smart clock) with a lot more features.

With its small form factor and various clock-centric features, the Echo Show 5 is essentially a combination Echo Show and Echo Spot. It's an Alexa smart display squeezed down to alarm clock size, but without sacrificing too much screen real estate that photos and videos can still be enjoyable. I tend to prefer the Nest Hub with its larger screen, smarter photos integration and the lack of camera, but I can definitely see the appeal of the Echo Show 5. If you're an Amazon fan who wants a smart display with solid alarm clock features, then the Echo Show 5 definitely fits the bill.

All products recommended by Engadget are selected by our editorial team, independent of our parent company. Some of our stories include affiliate links. If you buy something through one of these links, we may earn an affiliate commission. All prices are correct at the time of publishing.
View All Comments
Amazon Echo Show 5 review: An Alexa display with alarm clock smarts