It's a Google-powered clock done right.

When Amazon released the Echo Spot in 2017, I praised it for being an adorable Alexa-powered smart clock. Yet, I thought its $130 asking price was a little high and having a camera by your bedside does feel a little creepy. This year, Lenovo and Google unveiled a product I found a lot more compelling: the Lenovo Smart Clock.

It doesn't have quite as many features as the Echo Spot, nor can it do all the things a typical Google device can. But at $80 it's cheaper, and its simple, singular focus on being an alarm clock is a surprisingly fascinating one. That's why it won our Best of CES award this year in the smart home category, and it's why I'm a tiny bit in love with it now.

One of the reasons I like the Lenovo Smart Clock so much is its design. It's tiny, measuring just 4.48 inches wide, 2.9 inches tall and 3.1 inches deep. No, it doesn't have the round shape of the Echo Spot -- it's a lot more rectangular -- but the Lenovo Smart Clock still has charm. The enclosure is largely clad in a soft fabric finish, with rounded corners and curved edges, which contributes to its classic style. It blends into my home decor and I like the way it looks on my nightstand.

Like other smart displays, there's a microphone (mute) toggle on the back offering a little extra privacy. The Smart Clock, however, has an additional USB port which I found useful for charging my smartphone while I slept. Since the Smart Clock is obviously designed to be by your bed, I was also thankful that it doesn't have a camera. Much like the Nest Hub (which also lacks a camera), I feel more comfortable using it in my bedroom. 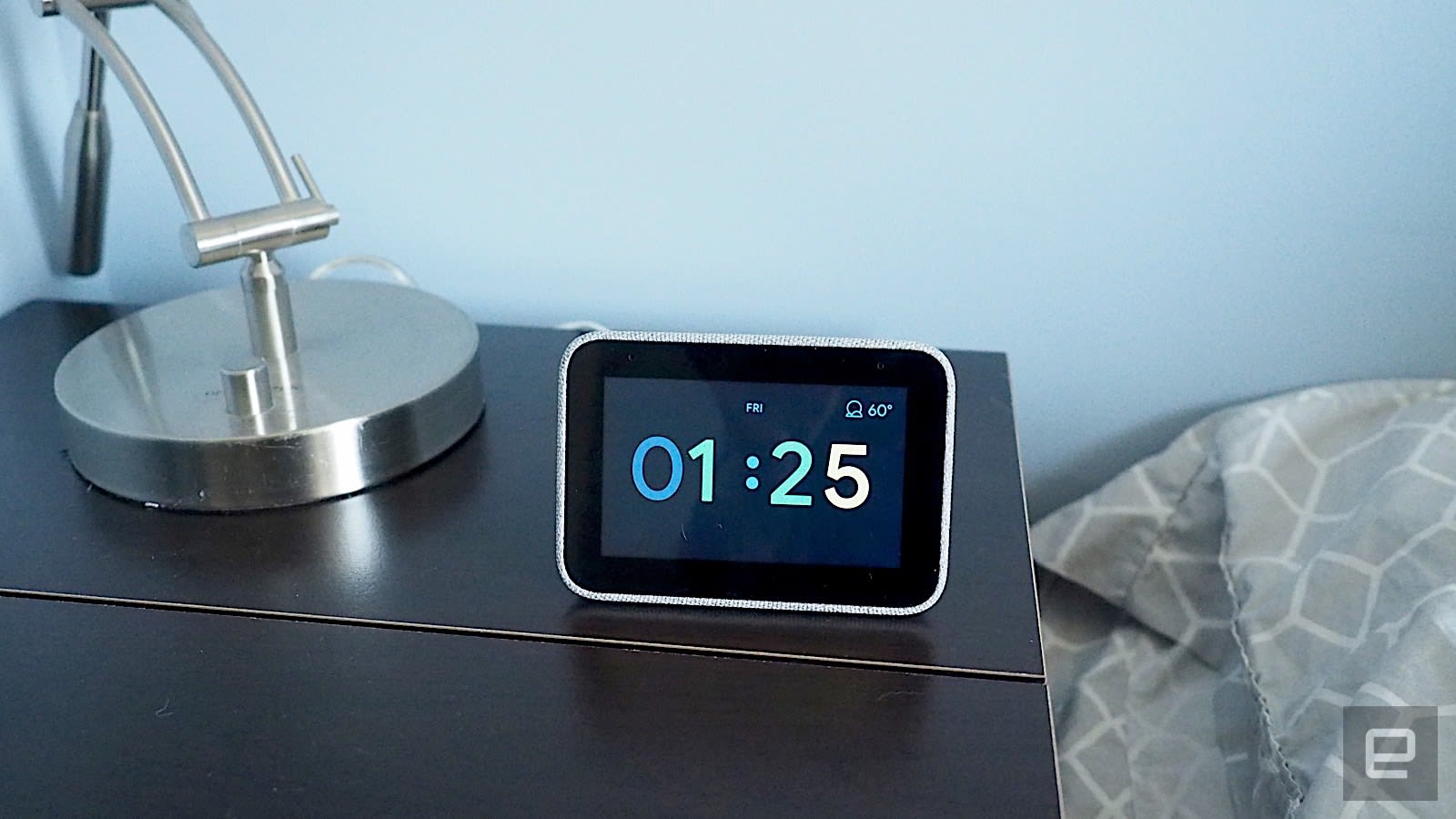 On the front of the Smart Clock is a 4-inch touchscreen, which seems small compared to other smart displays. But as this is meant primarily as a clock, I think that size is fine; it's bigger than the Echo Spot's 2.5-inch screen at least. I found the Smart Clock's display was bright and crisp enough for my needs, and I especially liked the ambient light sensor that adjusts the brightness according to its surroundings. It'll switch to a very dim "dark mode" with the lights off at bedtime, which is great because that's when you definitely don't want a super bright light next to your head.

I should note that the Smart Clock is not a typical Google Smart Display. While the Echo Spot was essentially a miniature Echo Show, the Smart Clock is more than just a smaller smart display. It is, first and foremost, a clock with an interface and feature set that's decidedly clock-centric. With most smart displays, for example, I have to use my voice or swipe the screen a few times in order to set an alarm. With the Smart Clock, I simply tap the screen a couple of times. I could use my voice as well, but there are times when a screen tap is preferable (like when I don't want to wake my sleeping spouse).

Similarly, swipe down from the top to reveal a "play music" button and a toggle for bedroom lights (obviously only useful if you have smart bulbs installed). There's also a shortcut to a "Good Night" routine, which triggers a custom set of actions, like adjusting the temperature or turning off the TV. Again, you can enable these features via voice, too, but sometimes the touchscreen is faster and more efficient. 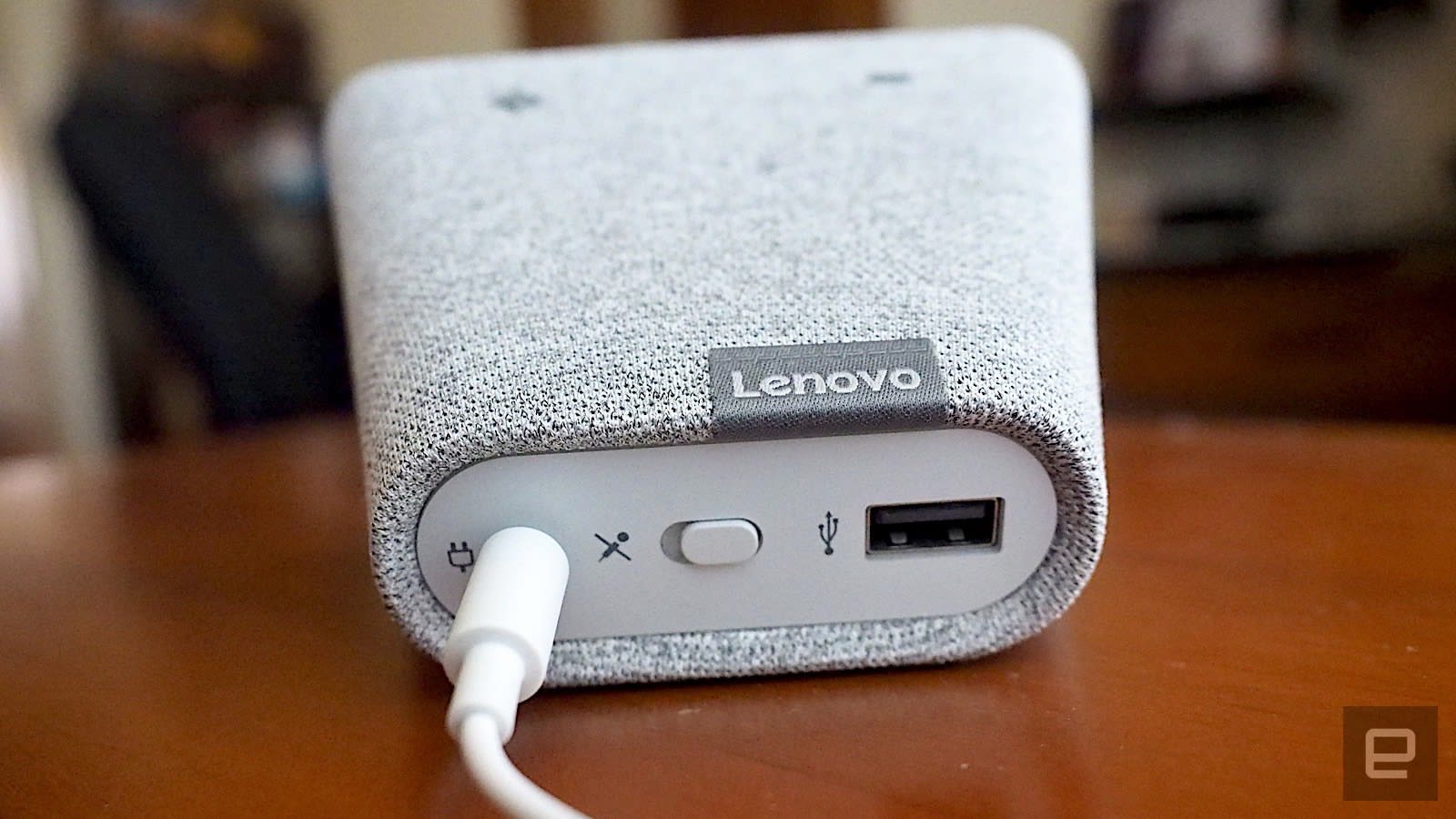 The Smart Clock comes with eight different clock faces, plus six alarm tones. There's also an option for a "sunrise alarm" -- thirty minutes prior to the set time, the Smart Clock slowly brightens its screen to simulate the effect of daylight's arrival. Yelling "Stop" will dismiss the alarm, which is what I tend to do most often. With the Smart Clock, though, I can also choose to smack the top to either snooze or dismiss it.

Of course, the Smart Clock is more than just a clock. One area where it shows its intelligence is by surfacing occasional reminders and tips to suggest future alarms. Since it has access to my Google Calendar, it can see upcoming appointments and offers to set an alarm so that I don't miss them.

Like other Google devices, it also displays the weather, calendar events and the song I'm currently playing. Just as there's a "Good Night" routine, I can set a "Good Morning" routine too, where I can have it show me the day's forecast and the estimated time of my morning commute. It also doubles as a viewfinder for Nest cams; I often use it to check out my Nest Hello to see who's at the front door. 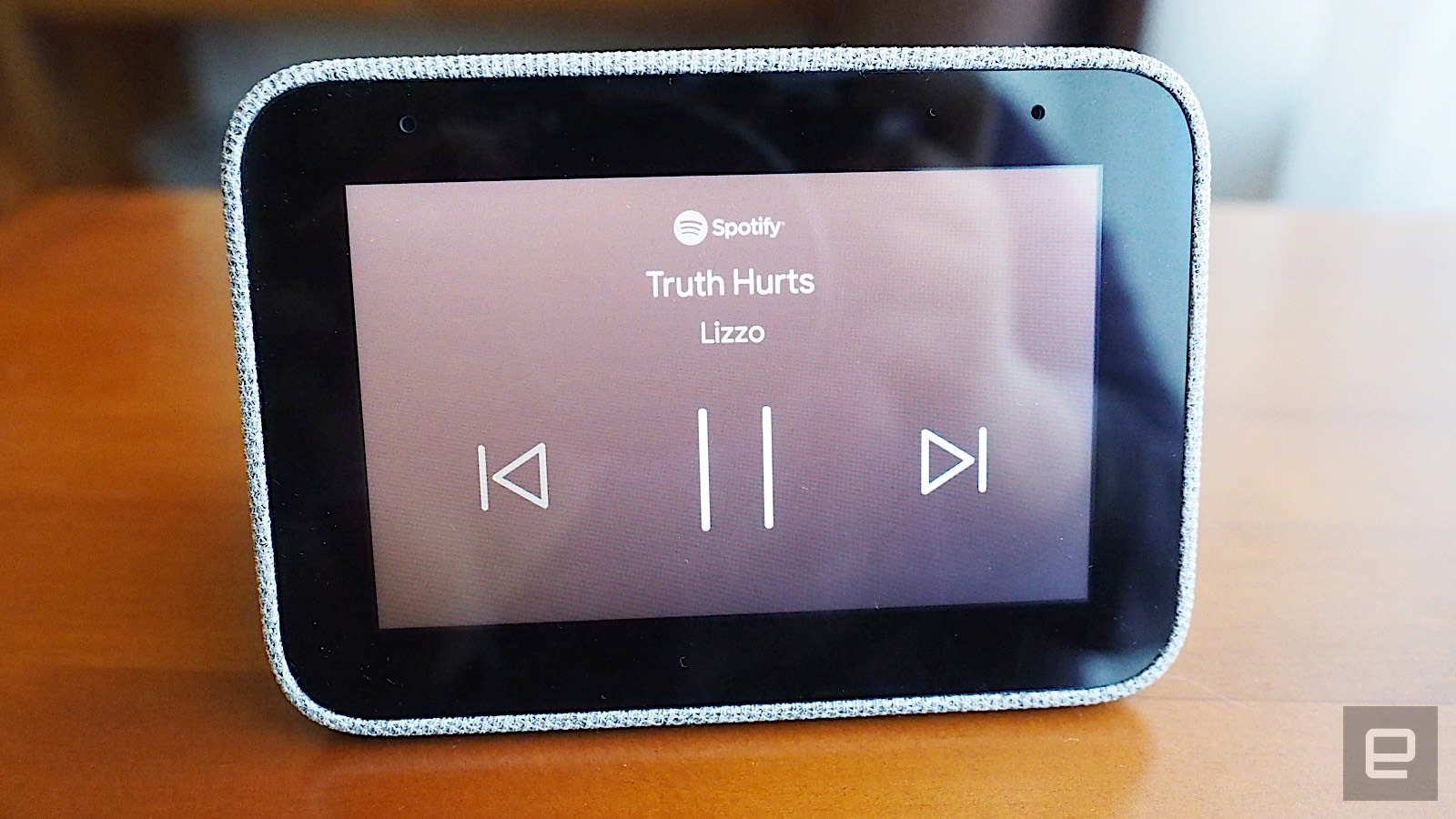 The Smart Clock has decent sound as well, thanks to a three-watt speaker and two passive radiators. No, it doesn't have the same bass as the Nest Hub, but it definitely sounds a lot fuller than my phone. There were multiple times when I used it to play a Spotify playlist as I was getting ready for work.

However, the Smart Clock lacks a lot of features you'd find on other smart displays. Since it doesn't have a camera, it won't be able to make video calls via Google Duo. It also won't play YouTube videos (or any video for that matter), and it can't display Google Photos. Yet, as I mentioned, the lack of a camera is actually a positive in my book. I also don't think photos or videos would look very good on such a tiny screen, so I wasn't too bothered by this omission.

If you do want all those features, the Echo Spot might be a better fit. It supports video calls and also plays Amazon Prime video. But the 2.5-inch screen isn't great for watching videos and, as I mentioned, not everyone is comfortable having a camera on their nightstand. 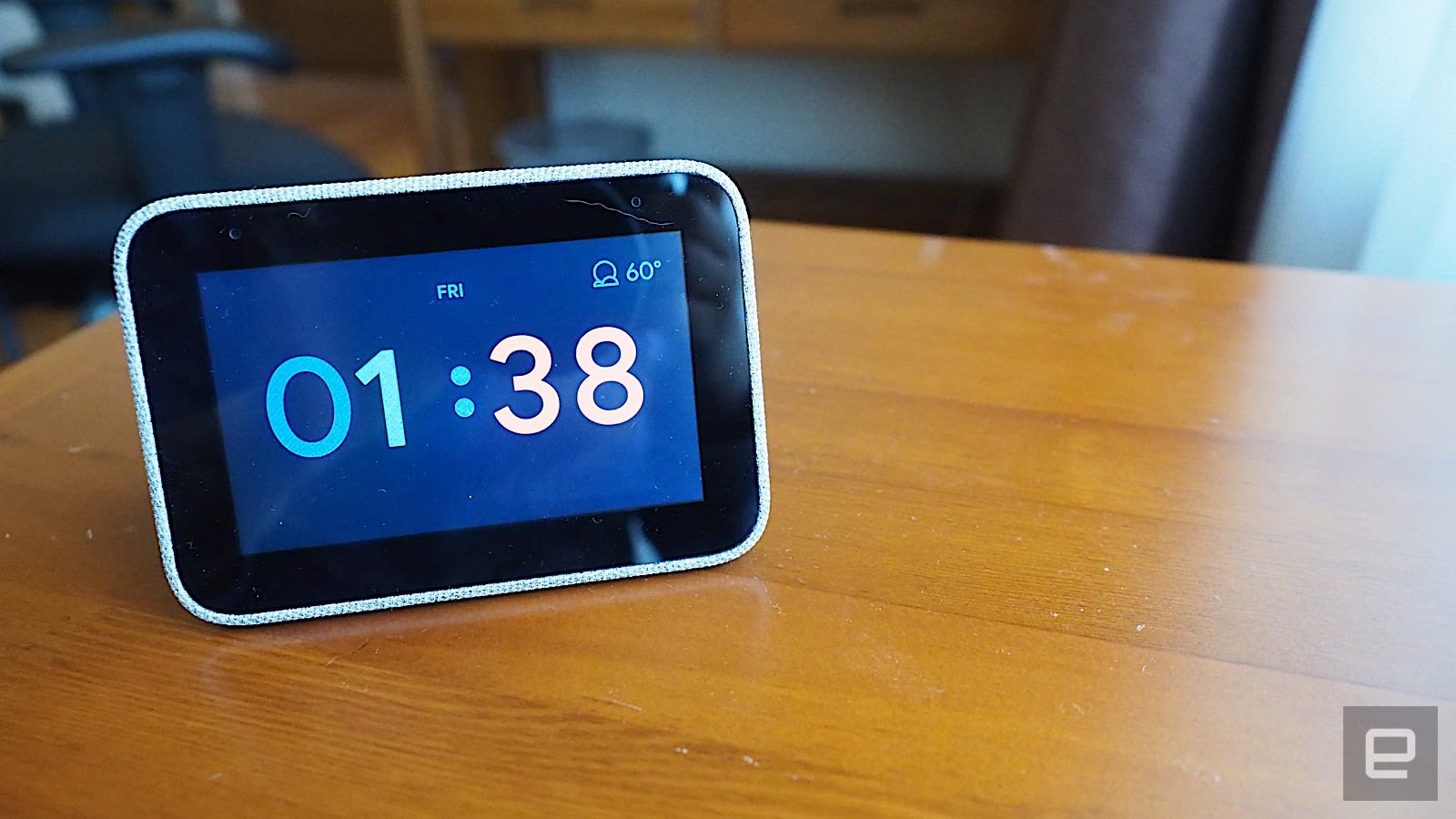 A better alternative might be the Nest Hub, which has a larger 7-inch screen. It doesn't have a camera either but does play YouTube videos and tap into your Google Photos library (as a digital photo frame).

Despite all that, I'd still opt for the Lenovo Smart Clock as the ultimate nightstand gadget. I don't want my bedside to be a YouTube-playing distraction, and the clock-centric features like the sunrise alarm and reminders make it much more suitable as a nightstand clock than the other options. Plus, the Echo Spot and Nest Hub cost $130 each, while the Smart Clock is $80. I do wish the Smart Clock were even cheaper given its limitations, but it's still more affordable than the alternatives.

With its understated appearance, Google-powered features and affordable price point, the Lenovo Smart Clock proves that devices don't need to have all the bells and whistles to be great. If you want something more robust, you can opt for a larger, more feature-packed smart display. But if all you want is a smarter alarm clock, this one more than fits the bill.

All products recommended by Engadget are selected by our editorial team, independent of our parent company. Some of our stories include affiliate links. If you buy something through one of these links, we may earn an affiliate commission. All prices are correct at the time of publishing.
Lenovo Smart Clock review: Sometimes less is more
gear
google
home
lenovo
lenovo smart clock
lenovosmartclock
personal computing
personalcomputing
review