The company has released its long-awaited MIDP for Quayside and the broader Eastern Waterfront.
N. Summers|06.24.19
@nisummers

Better late than never. Sidewalk Labs, the part of Alphabet focused on cities and urban development, has unveiled its Master Innovation and Development Plan (MIDP) for a proposed smart neighborhood on Toronto's Eastern Waterfront. The MIDP is called a "draft," but it's the first official pitch document that sets out the company's vision for the area. It will be scrutinized by Waterfront Toronto, a publicly-funded organization, and ultimately, voted on by its board and the Toronto city council in late 2019 and early 2020. If it goes through, Sidewalk hopes to begin construction on the first part -- a site called Quayside -- before 2021.

The company has shared morsels of its smart city vision before. These include the 200-page document that helped it secure the project -- that is, the right to develop the MIDP -- back in October 2017. Since then, Sidewalk Labs has been stuck in a research phase, consulting with experts and gathering public feedback. The team has shared some, but not all of its evolving ideas through a mixture of live events, blog posts, PDF presentations and podcasts. These snippets, it always emphasized, were exploratory and subject-to-change ahead of its all-important MIDP.

The document, even in draft form, solidifies the company's thinking. It also gives Toronto residents their clearest picture yet of what a smart neighborhood spearheaded by Sidewalk Labs -- and by extension, Google -- might look like. Below, we've summarized the main features that will likely spark debate in the coming months.

First and foremost, a bit of geographical background. The company is currently proposing two smart neighborhoods -- Quayside and Villiers West -- that will exist inside a broader area called the Innovative Development and Economic Acceleration (IDEA) district. Quayside would be the first part of the project, and house 4,200 residents. The company is then proposing a partial redevelopment of Villiers Island, called Villiers West, that would house a 1.5 million square foot innovation campus. Google would build a new headquarters on this land and an applied research institute for urban innovation, "anchored by local institutions." Villiers West would house 2,700 residents and offer 7,400 jobs. 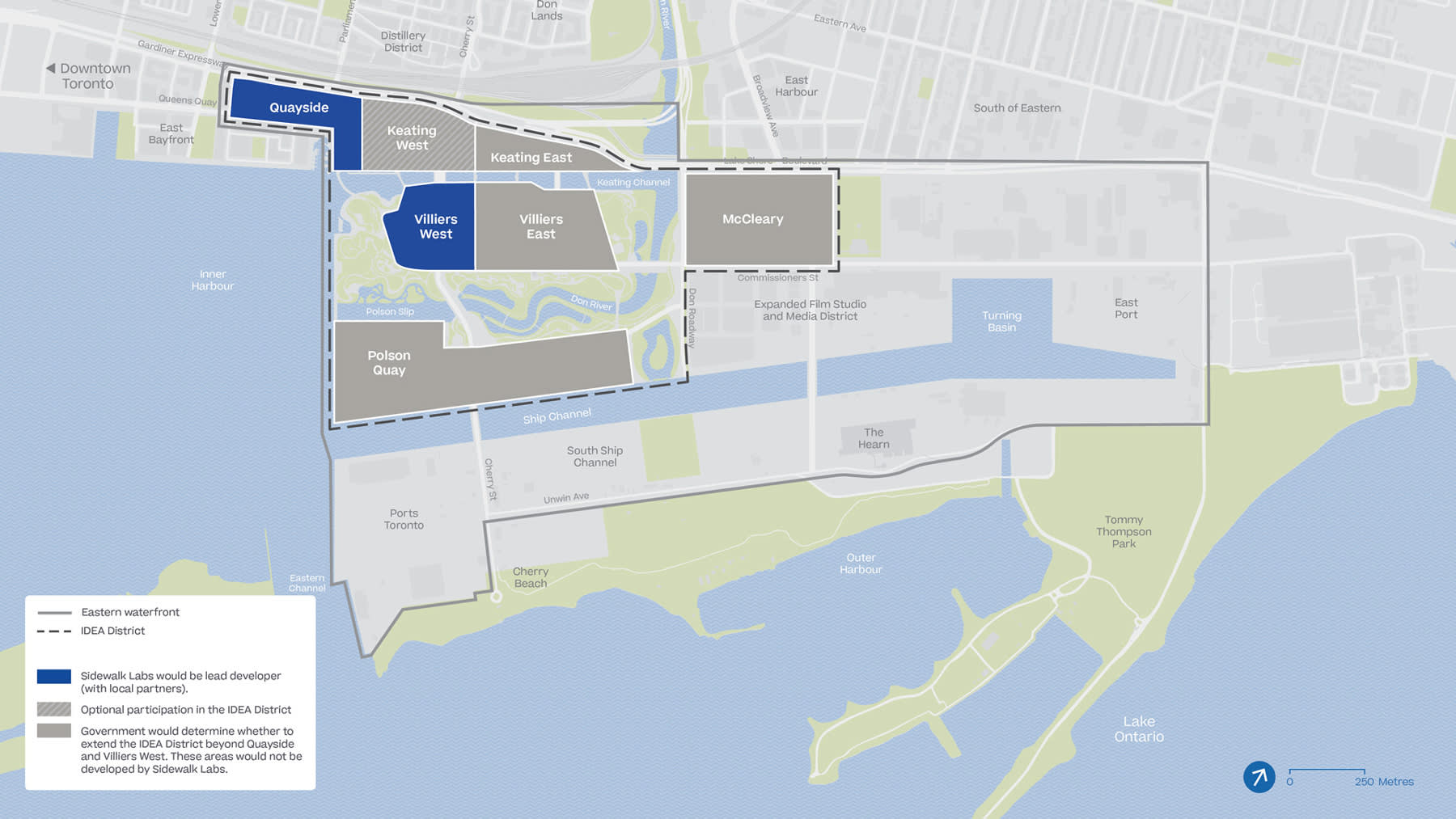 As expected, Sidewalk Labs wants to use timber to construct most of the buildings inside the Eastern Waterfront. The materials would be sourced from a new factory in Ontario that would, according to the company, create roughly 2,500 manufacturing jobs. The final structures would offer adaptable "Loft" spaces with floor plates that can serve both residential and commercial tenants. They would have also have "flexible wall panels" to accelerate renovations and reduce vacancies. Crucially, the company is promising "an ambitious below-market housing program" that would include 20 percent affordable housing and 20 percent middle-income housing units. 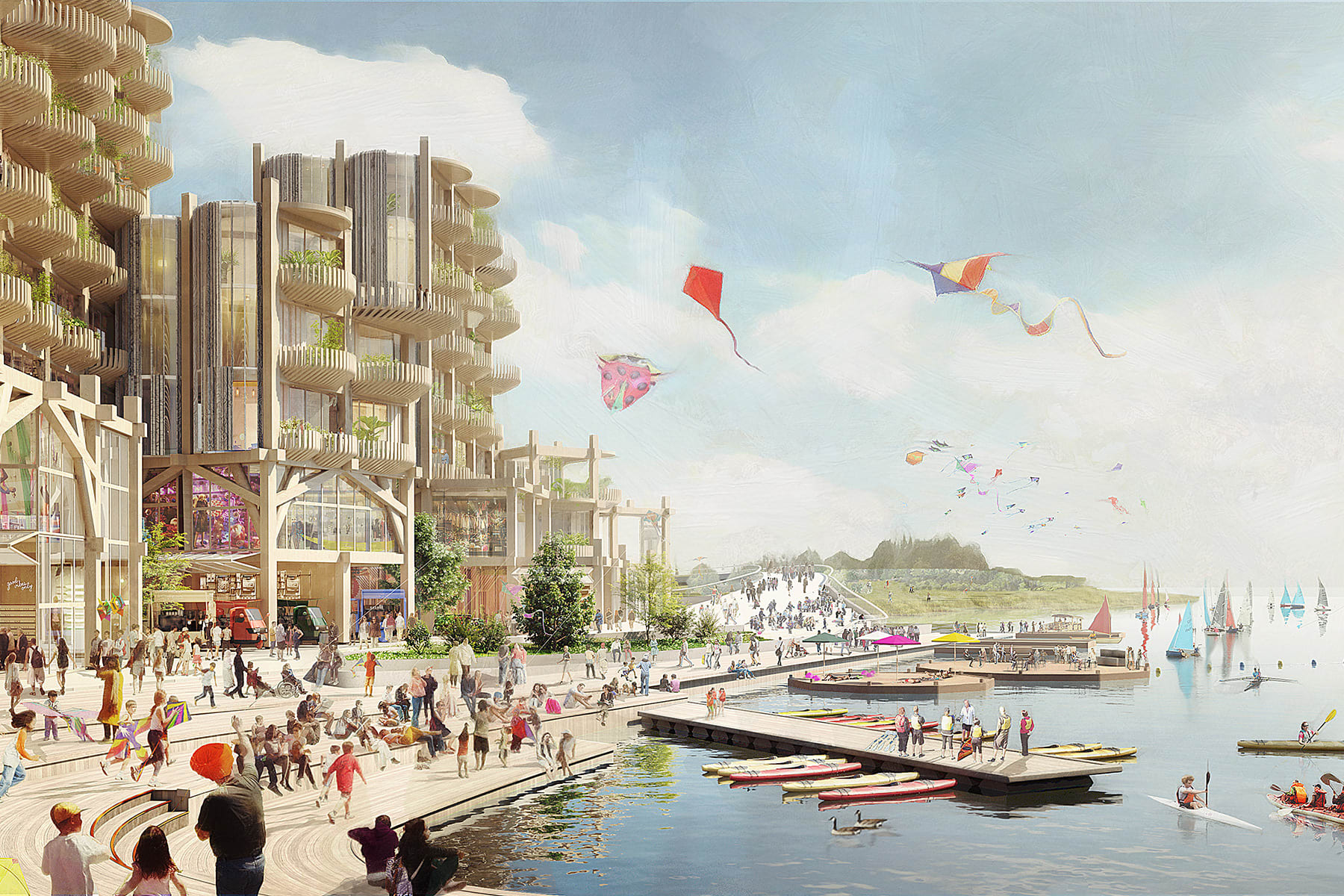 Every building inside Quayside will have a Toronto Green Standard Tier 3 rating for energy efficiency and a Tier 4 rating for greenhouse gas intensity. The district would also leverage a thermal grid that, in part, relies on the natural temperature of the earth to both heat and cool homes. In addition, Quayside would use solar energy, some kind of battery storage solutions, and software called Schedulers to optimize energy usage for residents, businesses and building operators. Finally, the proposed smart neighborhoods would have a "smart disposal chain" that includes an underground tube system for household and business waste. 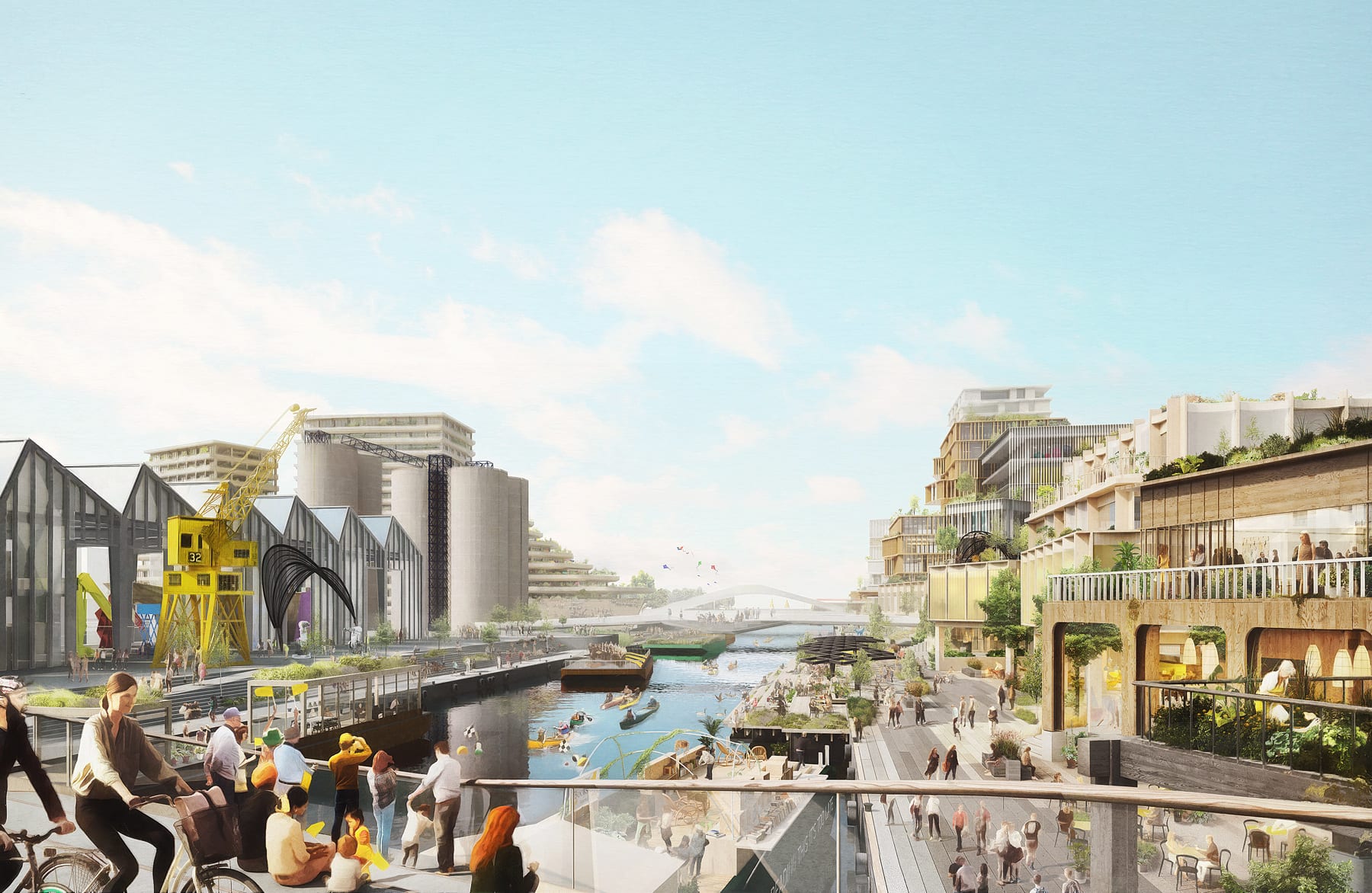 Sidewalk Labs is pushing ahead with the independent data trust that it first announced last October. The proposed watchdog would oversee, analyze and ultimately approve any company that wants to collect or use urban data -- including Sidewalk Labs. The Alphabet-owned company has made three overarching commitments: No selling personal information, no using personal information for advertising, and no disclosing personal information to third parties without explicit consent. The trust, though, could hold other companies to higher or lower standards -- for now, it's still a theoretical concept. The ambiguity though, won't assure residents who are worried the project will become a privacy nightmare. 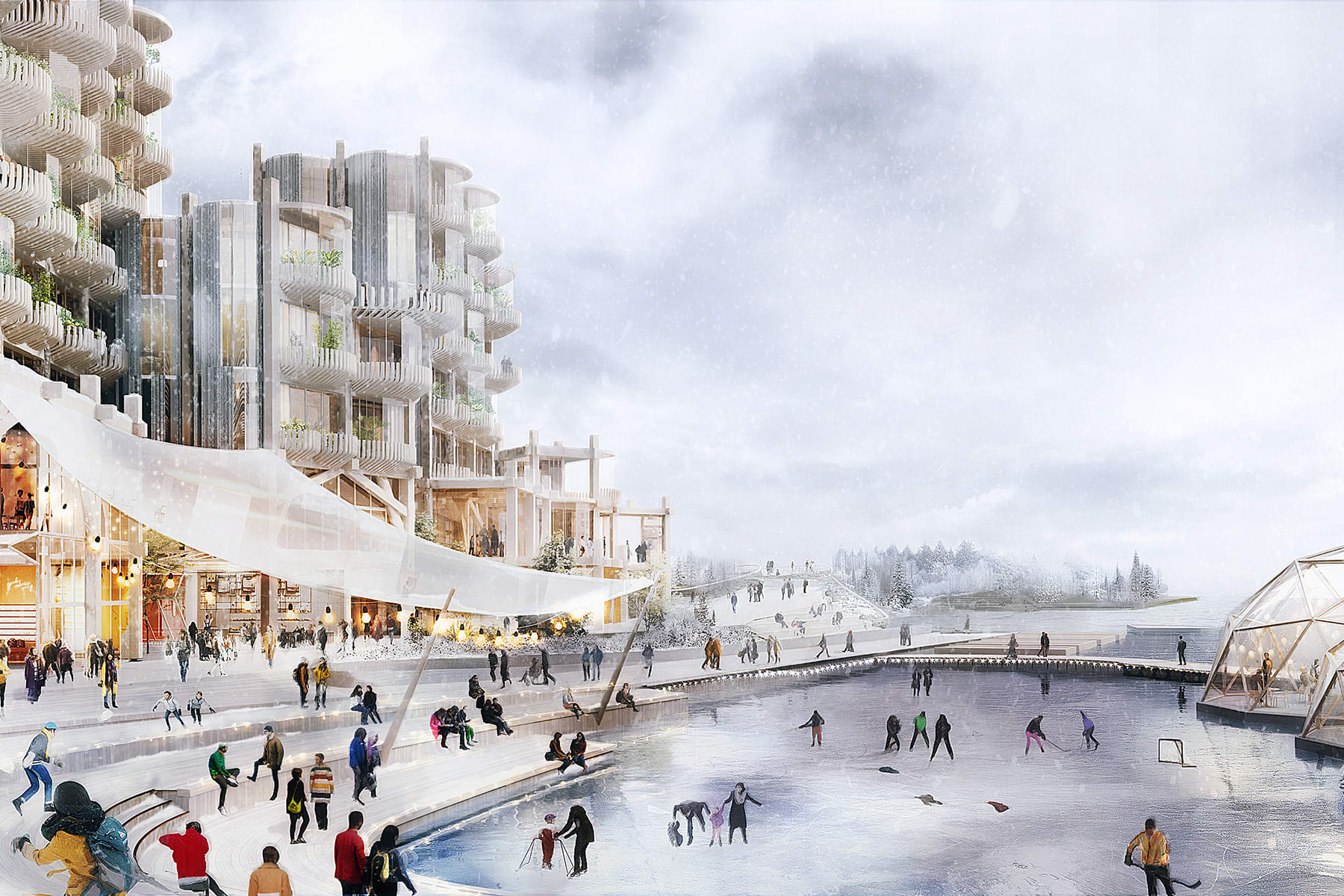 Sidewalk Labs is pitching three major public spaces for Quayside, called Parliament Plaza, Parliament Slip and Silo Field. They would be supported by building "Raincoats" and free-standing "Fanshells" to provide shelter during harsh weather. The company will also introduce an adaptable ground-floor "stoa" concept that can support stores, restaurants, community spaces, pop-ups and small businesses. In addition, Sidewalk Labs will push ahead with its modular pavement system that could make it easier to repurpose parts of the city -- think temporary street festivals, rush-hour cycle lanes and ride-hailing drop-off points -- for public use. 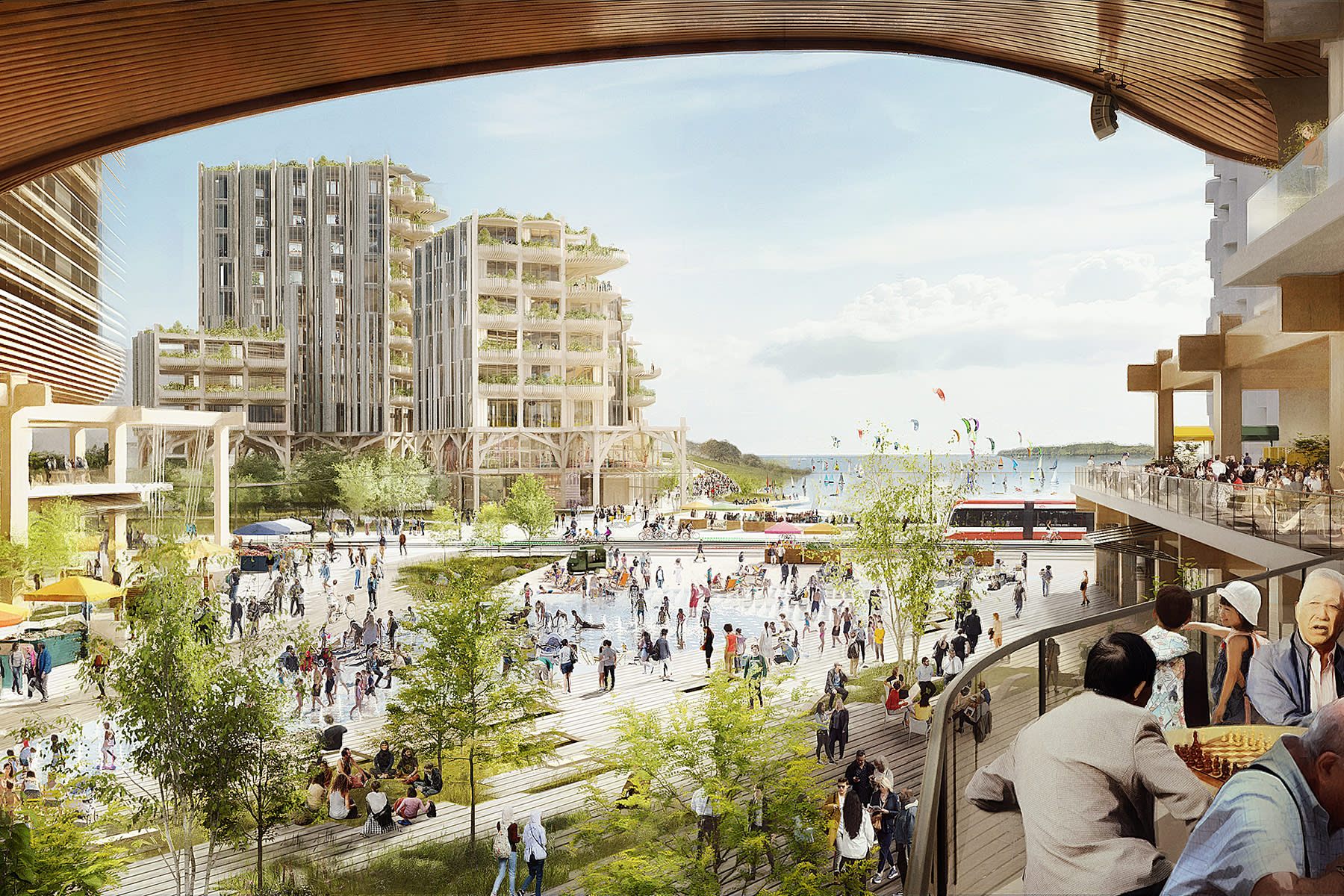 Everyone wants to know how Sidewalk Labs will make money from the project. In the MIDP, the company outlined its "specific commitments" and associated "business models." The commitments include a $900 million equity investment that will form part of a $3.9 billion budget for both Quayside and Villiers West. It's also proposing $400 million in optional financing to accelerate the development of the Light Rail Transit (LRT) that is needed to connect the area to the rest of Quayside, as well as "municipal and advanced infrastructure systems" in the area.

On the flipside, Sidewalk wants "standard real-estate economics" for property sold and rented across both Quayside and Villiers West. It would also charge for "advisory services," and "standalone economics" for its investment in the proposed timber factory ($80 million) and a new venture fund ($10 million), based in Villiers West, with a mission to help Canadian startups. Sidewalk Labs would also charge for select technologies that cannot be provided by external partners and request some kind of "market return" for the optional LRT financing, should Toronto decide to go with it.

Finally, Sidewalk is suggesting performance payments, at the end of the project, based on the following: "Success in accelerating development, achieving priority outcomes, and generating new economic activity and government revenues." 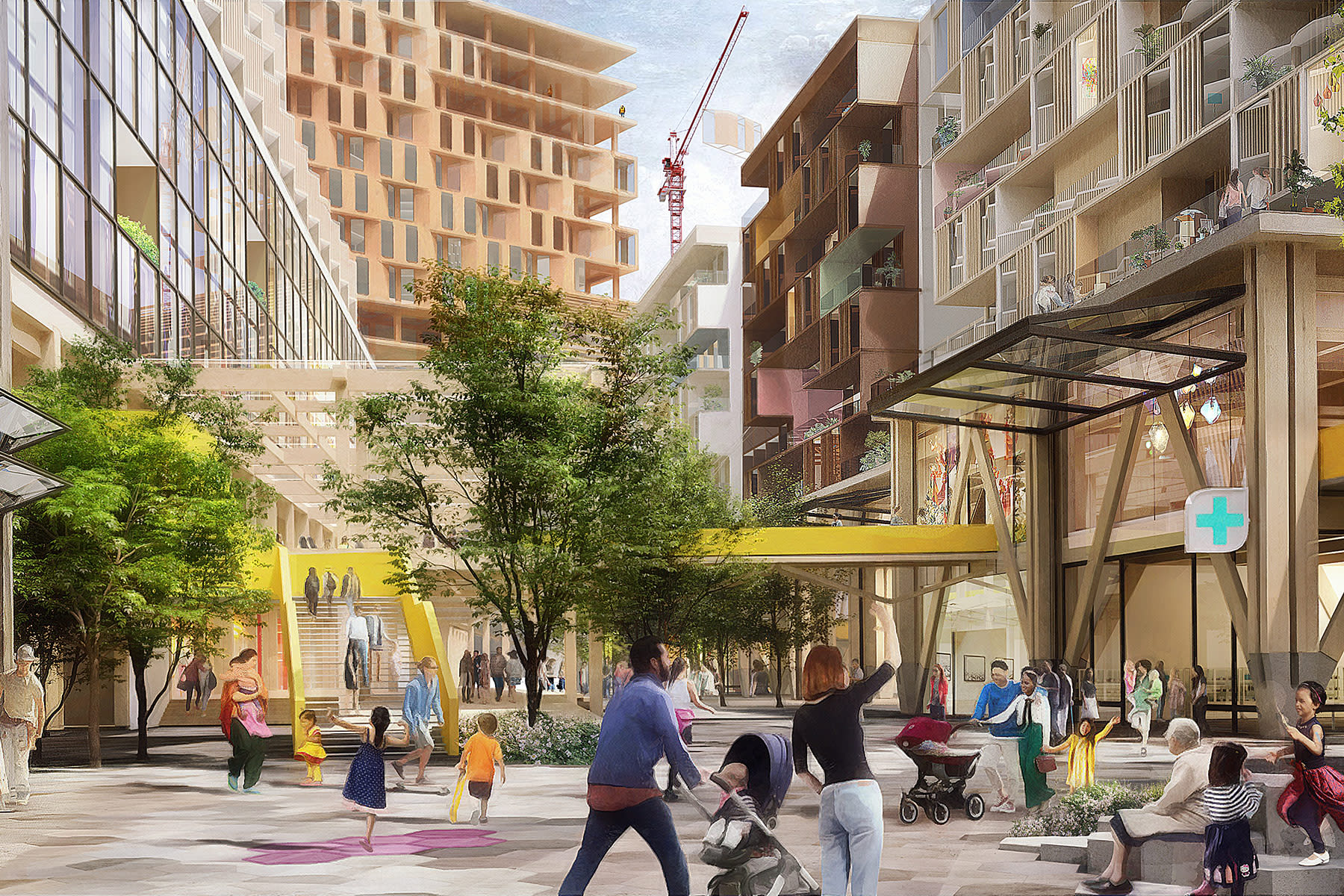 Sidewalk admits that its involvement beyond Quayside -- including Villiers West, which would house its new Google office -- will need to be "earned, not guaranteed." It has therefore proposed a number of steps that will be gated -- until it completes the first, it cannot start the second, and so forth. The steps include submitting a Quayside development plan before 2021; beginning construction on Quayside before 2022; submitting a Villiers West Development Plan before 2023; beginning construction on Villierst West before 2024; proposing innovation guidelines for the broader IDEA district by 2025; and requesting performance payments by 2028.

"To successfully achieve each stage gate, Sidewalk Labs would prove that its progress was consistent with Waterfront Toronto's priority objectives and demonstrate the effectiveness of its overall approach," the company says in the MIDP. 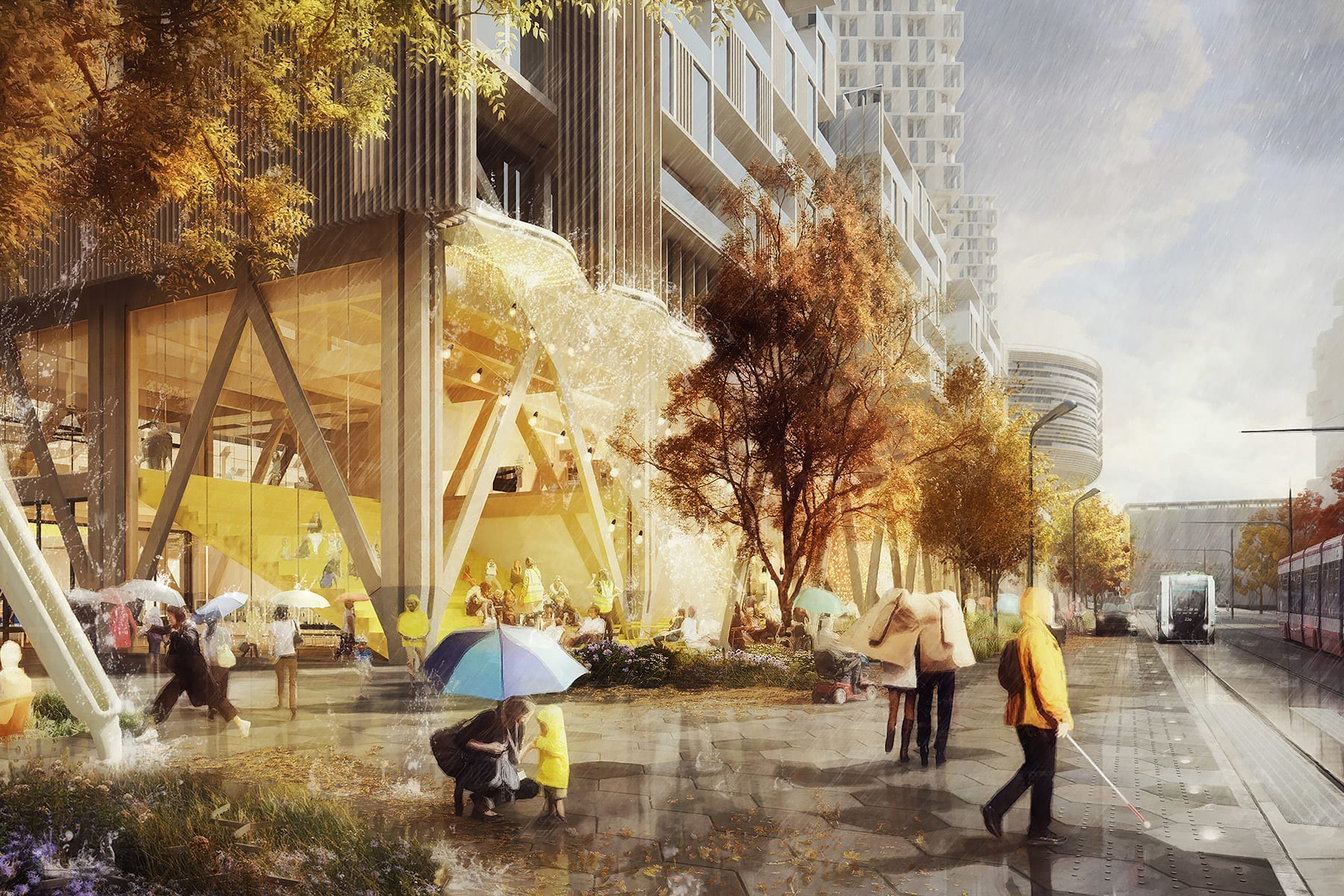 A protest movement called Block Sidewalk, meanwhile, has criticized the company for labeling its MIDP a "draft" document. "Sidewalk Labs has succeeded in pressuring Waterfront Toronto to consider this plan as a 'draft,' even though they had already bought months and months of extra time by saying they needed it to 'get it right,'" the protest group said in a statement prior to the MIDP's release. "They used that time to lobby politicians and cut side deals, and now they're doing it again. Waterfront Toronto needs to tell Sidewalk Labs that they've had more than enough time to 'get it right' and this will be considered the final version of the plan."

The MIDP is split into four parts. We've embedded each volume below.