It will be worth the wait.

Hollow Knight was a gorgeous, entertaining action platform game that appeared out of nowhere for a lot of us. The rare result of a crowdfunding campaign that succeeded, the game stood out with its combination gorgeous cartoon(ish) characters, lush levels, high-quality sound and a perfect balance of exploration and action. I think the indie picked up a lot of new fans when it appeared on the Switch last year. Enough to warrant its sequel, Silksong, heading to both Nintendo's hybrid console, alongside PC. That is, when it does launch.

While its creators recently told fans they wanted it to match "the quality and scale of Hollow Knight" before announcing a release date, this week, I got to spend over 20 minutes playing through two different areas of the game, and it feels like it must be pretty close. Please?

In the sequel, you play as Hornet, a slender, faster character that mixes different skills and attacks which make Silksong feel slicker and more urgent than Hollow Knight. Hornet's abilities, which you might recall from the first game, are silk-based attacks mixed in with diagonal dives and plenty of jumping. Now, as you're in control of her, those silk abilities are tied to her life.

When she's accumulated enough silk by bashing enemies, she can treat herself to a swift health burst that heals three masks. Hollow Knight only healed a single mask after a second or so of focus -- it's probably the most obvious indicator about how the game is built around a more chaotic, thrilling play style. Recall how Doom was reinvented a few years ago: you're on the attack now, fight hard, because your life and victory depends on it. 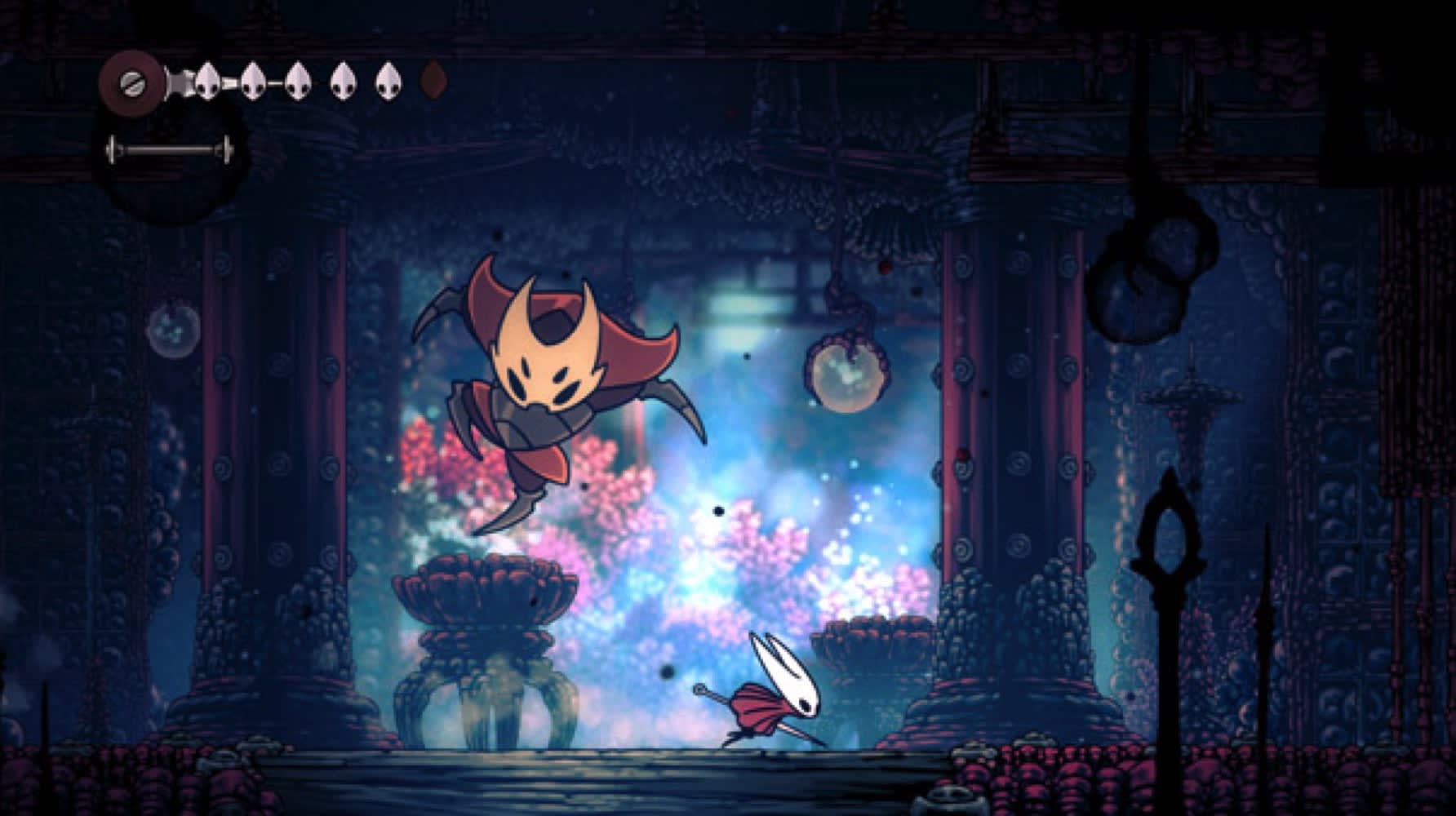 There's a drawback to this swift recovery, however. Hornet's "Bind" healing move will consume your entire silk meter -- so don't screw it up.

My demo re-trod the parts of the game Nintendo showed off at E3: The Moss Grotto, which appears to be the start of the game, and Deep Docks. Moss Grotto feels similar to the greener parts of Hollow Knight, and acted as an opportunity to acquaint yourself to playing with a different type of character. Hornet's jumps seem more elongated and vertical, and she'll even automatically vault onto platforms she bumps into, which is a forgiving (read: welcome) change from the original game.

Deep Docks, however, threw several more skills your way (a dash ability that is continuous, rejoice!), and pitted you against trickier enemies ( the developers are promising far more enemy types) and a couple of more major antagonists.

This was what I was looking forward to. Hollow Knight's tour de force may be its boss battles: an opportunity to show how well you can control the character, and the degree of mastery you have over new moves and upgrades.

Lace, then, appears an early highlight of Silksong. Making her appearance with an aggressive monologue (all she's missing is the dalmatian fur coat), she's a very aggressive fencer who delivers dashing attacks and counters, every bit as agile as the new protagonist. Alas, I didn't quite overcome her during my demo.

When you die in Silksong, instead of leaving a ghost behind, you'll leave a cocoon that packs enough silk for a burst of health. It'll add an extra strategic dimension to boss fights. Grab it now for the health boost, or save for dire straights?

While the sequel is apparently set in an entirely new locale, it continues the beautiful art style of the original, with molten lava accents and dusty, leafy floors kicked up as you rush around levels. And you will rush: the new character demands you make the most of her speedy attacks and mobility. The diagonal dive attack is Hornet's signature move, and you'll soon come across prepared enemies wearing helmets to protect against my go-to finisher. Like Hollow Knight, you can use this attack to bounce off enemies or rubbery objects to reach distant areas or simply to get out of harm's way.

Silksong pulls you into a more aggressive way of playing, but it also streamlines what were often slow laborious hikes across the expansive world of Hollow Knight. Once she's dashing at full clip, Hornet jumps in elegant, longer arcs -- something I kept repeating as I faced my new nemesis, Lace.

While we don't know much about the story of this sequel, Hornet seems a more confident character than the original's protagonist (heck she talks!), and that confidence is something that's stitched into the game itself. Silksong looks set to replicate the fun (and success) of Hollow Knight, but do it with finesse.