It's more than just a nostalgia play.

It's impossible to play Super Mario Maker 2 without having a huge smile on your face. It's a total deconstruction of what makes Nintendo's 2D platforming franchise so special. You're just a plumber, standing on a stage, hoping to make it to the goal intact. The real hook, of course, is that you can take everything you've learned from Mario games over the years and craft your own levels, with the freedom to make them as simple or thumb-numbingly complex as you'd like. And if you're just in the mood to play, you've got a practically endless supply of levels from Nintendo and the online community to feed on. There's no doubt Super Mario Maker 2 banks heavily on nostalgia, but it's also a way for both old and new players to truly grasp the power of 2D platformers.

The original Super Mario Maker debuted on the ill-fated Wii U in 2015, and it also made an appearance on the 3DS (with the sad omission of online support). As I noted in my preview of Mario Maker 2, the Switch is a far better console home for the series. You can play the game anywhere -- which is particularly helpful while building stages -- and then easily throw it on your TV for some big screen action. I would have been satisfied if Nintendo just brought the last entry over to the Switch when the system launched and called it a day. But given it's been so long, a full-fledged sequel made more sense.

The biggest change? There's finally a story mode, in addition to the core level creation and online community. Nintendo doesn't really break any new narrative ground -- the story just has you rebuilding Peach's Castle by playing through levels and earning coins -- but it's still a fun diversion when you don't feel like building stages. Even though the game is leaning on a pretty basic adventure game mechanic, it was enough to keep me consistently playing late into the night (just 150 more coins and I'll finally complete the West Tower!). It helps that most of the stages in story mode are well designed, and they often serve as inspirations for your own levels.

Still, I wish Nintendo pushed a bit harder with the story mode. There's no world map to speak of, you're mainly just running around Peach's Castle. There aren't really many surprises either -- you'll find a few warp pipes and extra coins, but that's about it. I figure Nintendo wanted to focus more energy on the level building aspects of Mario Maker 2, but I would have liked to see something bolder, like the single player World of Light mode in Super Smash Bros. Ultimate. 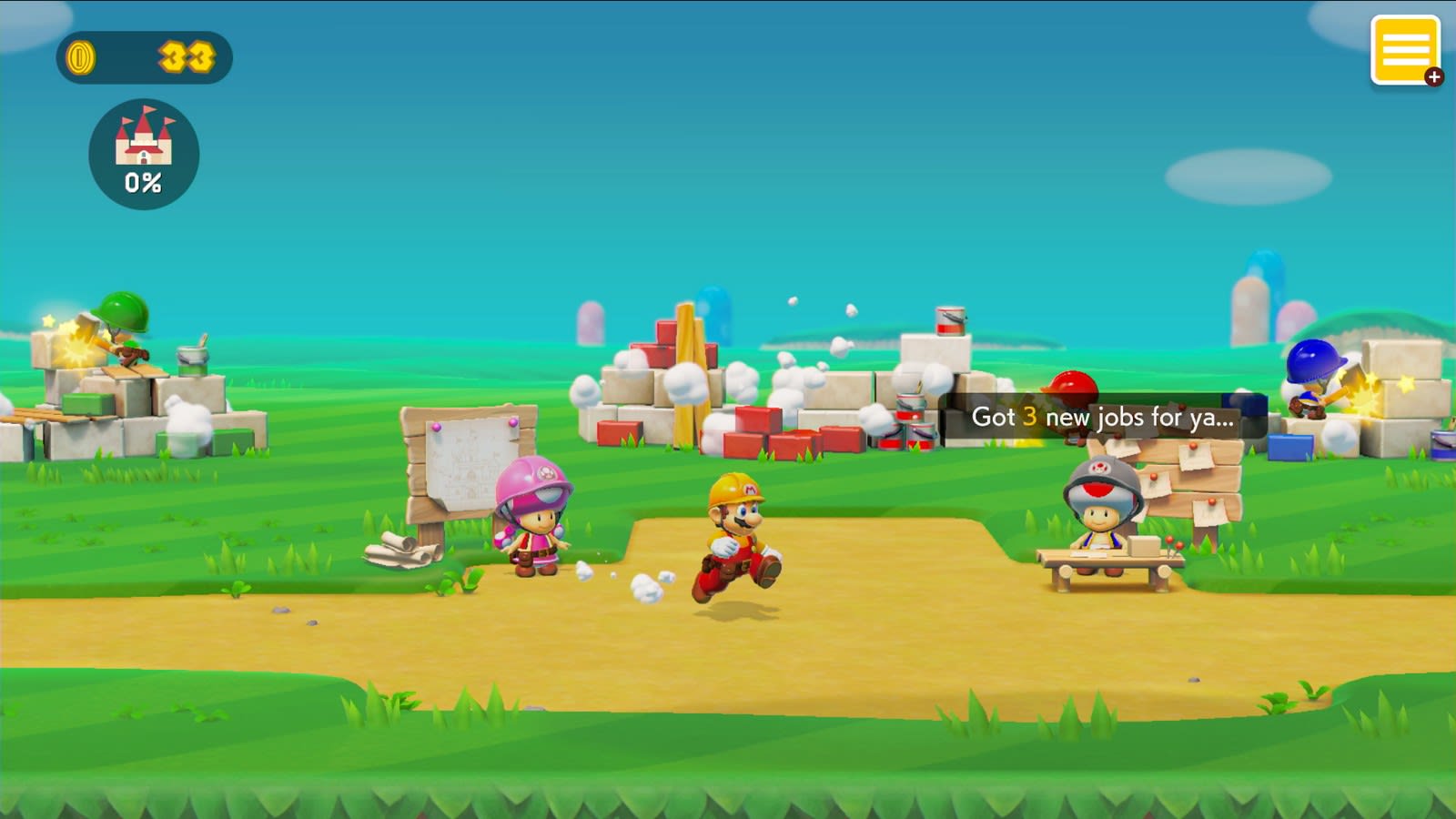 Then again, you might not even notice how threadbare the story mode is as you're diving into all the levels being created by the Mario Maker community. The game does a solid job of surfacing new and popular entries, which you can play almost instantly or download to your system to edit (think of it like the Mario equivalent of a web browser's View Source option). There's also a new endless mode, which throws stage after stage at you until you run out of lives. It sounds simple, but in practice it's genuinely exciting because you never know what sort of level you'll get. One might force you stay in the air after your first jump, while another has you driving cars through piles of enemies on your way to the goal.

Super Mario Maker 2's longevity will depend on its online community. And even though I was testing the game out on a private media server, I still stumbled into some ingenious creations (as well as a few truly infuriating ones). I'd wager we'll see some truly wild stuff once everyone can jump aboard Mario Maker 2. The original game managed to attract a dedicated following of creators on the Wii U -- now that Nintendo has a wildly popular console again and a full-fledged online network, that community can only get stronger.

Naturally, you'll need to subscribe to the Switch's online service to take full advantage of the game, but Nintendo is at least offering a year-long subscription with the $70 Mario Maker 2 bundle. (Typically, Switch Online costs $20 a year, or $4 a month.) Nintendo hasn't done a great job of selling the benefits of Switch Online so far, but I'd bet this game will encourage hesitant players to sign up. Otherwise, you're locked out of some of its most compelling features.

I'll admit, I'm far more interested in exploring the insane creations of the Mario Maker community than putting together my own levels. (It didn't help knowing that anything I made would be wiped ahead of the game's release.) But after spending a few hours crafting a Super Mario World and Mario 3 entries, I've come to appreciate the building process as a form of zen meditation.

You start with a fairly blank slate: Just choose the style of Mario game (sadly, there's no Mario 2), pick a level theme and you're free to proceed however you'd like. Do you want to make something welcoming for new players, or do you want to challenge seasoned fans? Maybe you just want to troll players with insane platforming requirements. It's entirely up to you. If you're plum out of ideas, there are also some helpful tutorials to guide you through early stage development. 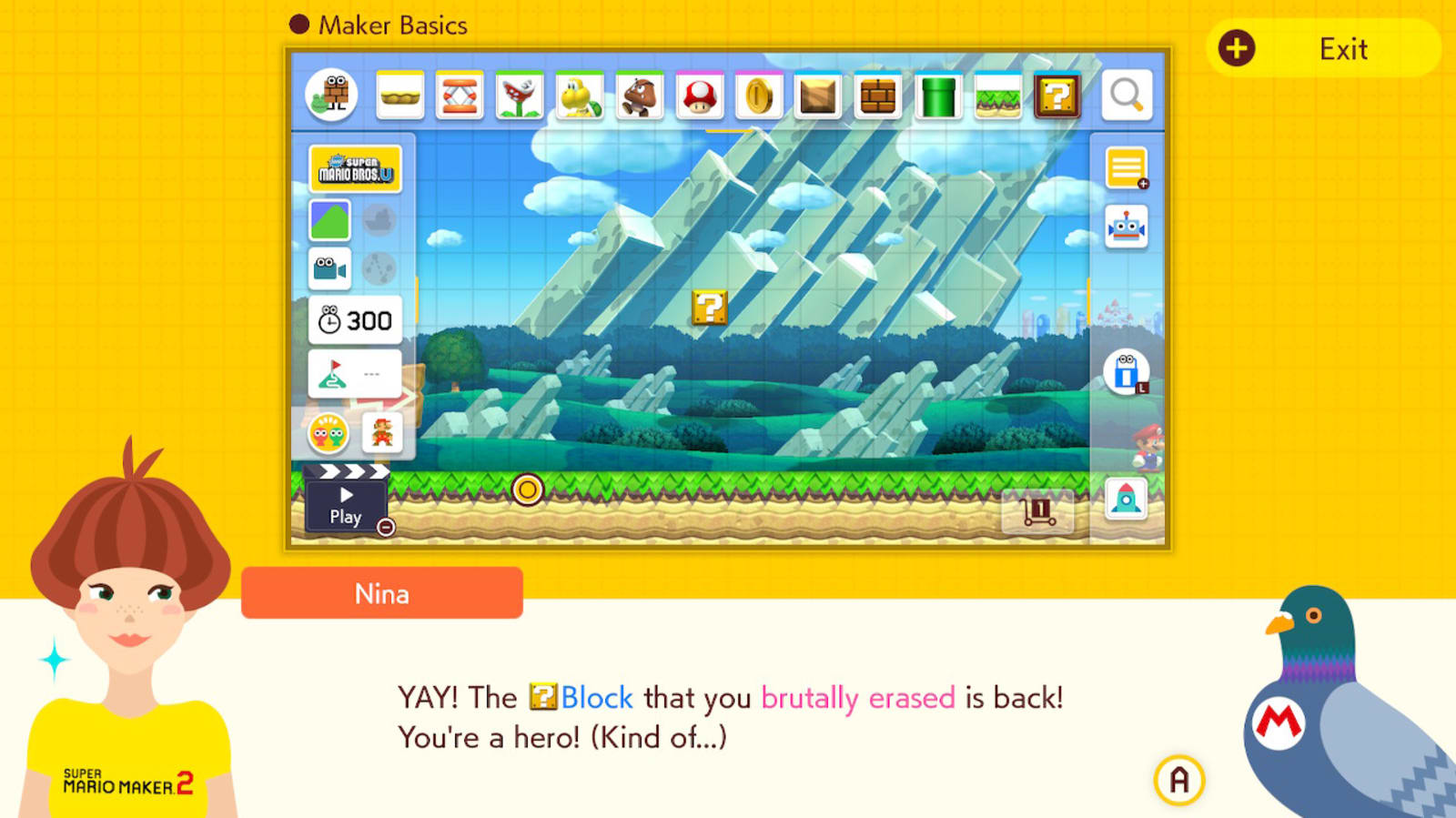 Thankfully, the Switch is a far better device for actually building Mario levels than the Wii U or 3DS. Mostly, that's because it has a capacitive touchscreen display, so choosing options and moving items around the stage is more like swiping your fingers on your phone. Both the previous consoles required styli for their sluggish resistive touchscreens. Nintendo also optimized the level editor: The top bar now dynamically includes your most recent item selections (you can also pin them there for safe keeping). Once you've placed an item on your stage, you can also hold down for additional options (for example, adding wings to keep a mushroom afloat).

Nintendo also did a surprisingly good job of adapting the level editor to the Switch's controllers, something you'll need to use whenever the console is docked to your TV. I was able to put together most of a Mario World stage with the Pro Controller, and while it wasn't as seamless as using the touchscreen, it was still easier than I expected. 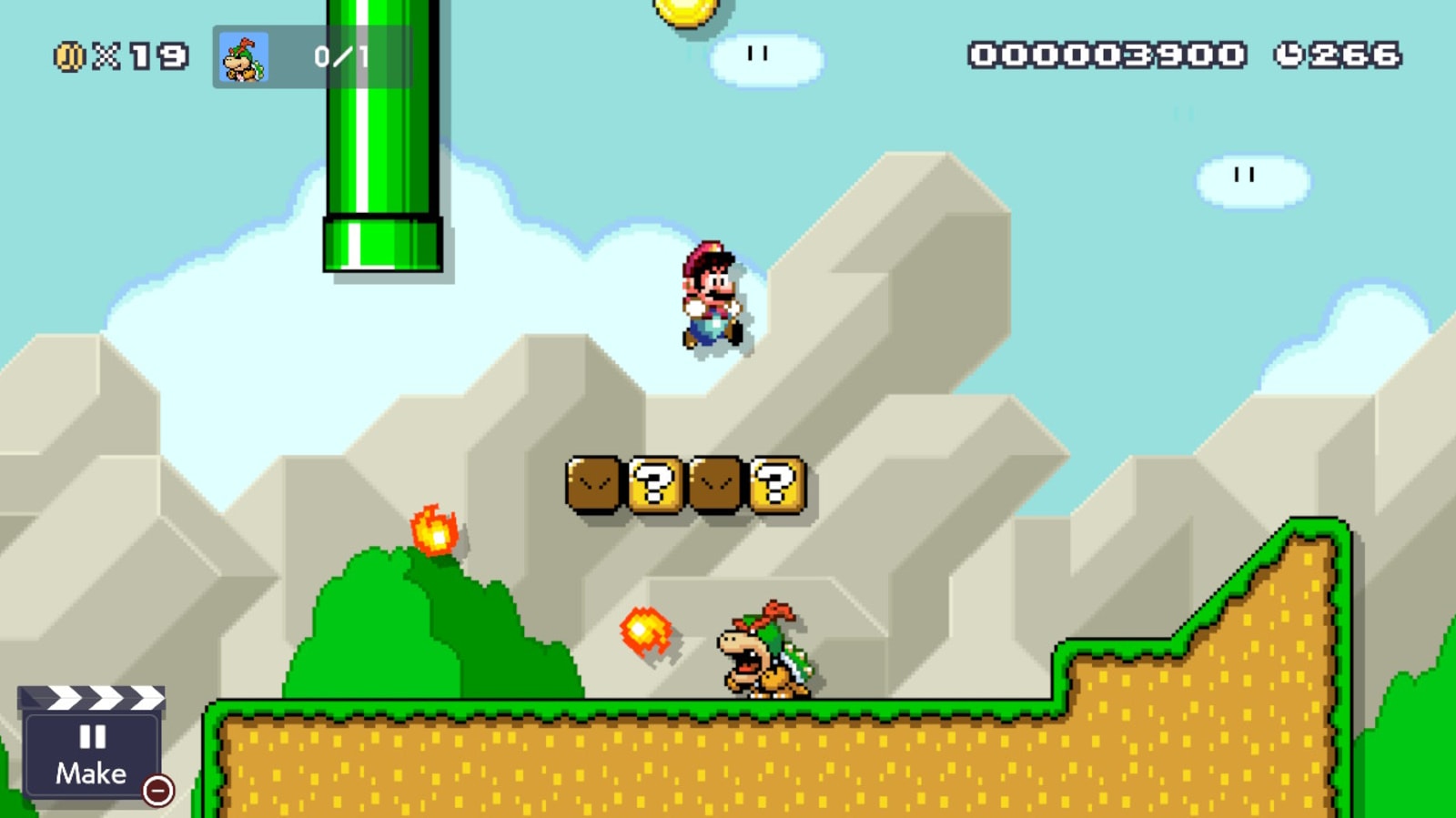 As I put that level together, I was instantly thrown back to all the hours I spent playing Super Mario World on the SNES. I threw a Magikoopa up front to keep players on their toes, added a cape feather above a mini-tornado (which itself was right next to a ravenous chain chomp) and set up a runway and coin path to fly to the rest of the stage. For a challenge, I dropped in Bowser Jr. and added a clear condition to defeat him to complete the stage. That's a new feature in Mario Maker 2, and it's bound to be contentious. Clear conditions have a way of turning seemingly simple stages into brain melters (I'm still haunted by a level with a single hidden coin that I couldn't find).

This time around, Nintendo also added Super Mario 3D World to the level types, which introduces a slew of new enemies (a Banzai Bill that shoots towards the camera!) and power-ups (the cat suit!). Unlike the other stage types, you can't easily switch your custom level into 3D World mode, it's just too different from the rest of Nintendo's library. And to be honest, I've got a lot less affection for this game type. I've got nothing against the 3D World games, it's just that my love for sprite-based Mario platformers runs too deep.

The game also adds a few multiplayer options: You can create stages with a friend and have up to four players run through levels. I didn't get a chance to test those out for this review, unfortunately. But I did have a blast joining up with three other journalists during my preview of the game -- none of us knew each other, but running and jumping together through a Mario level was an instant ice breaker. 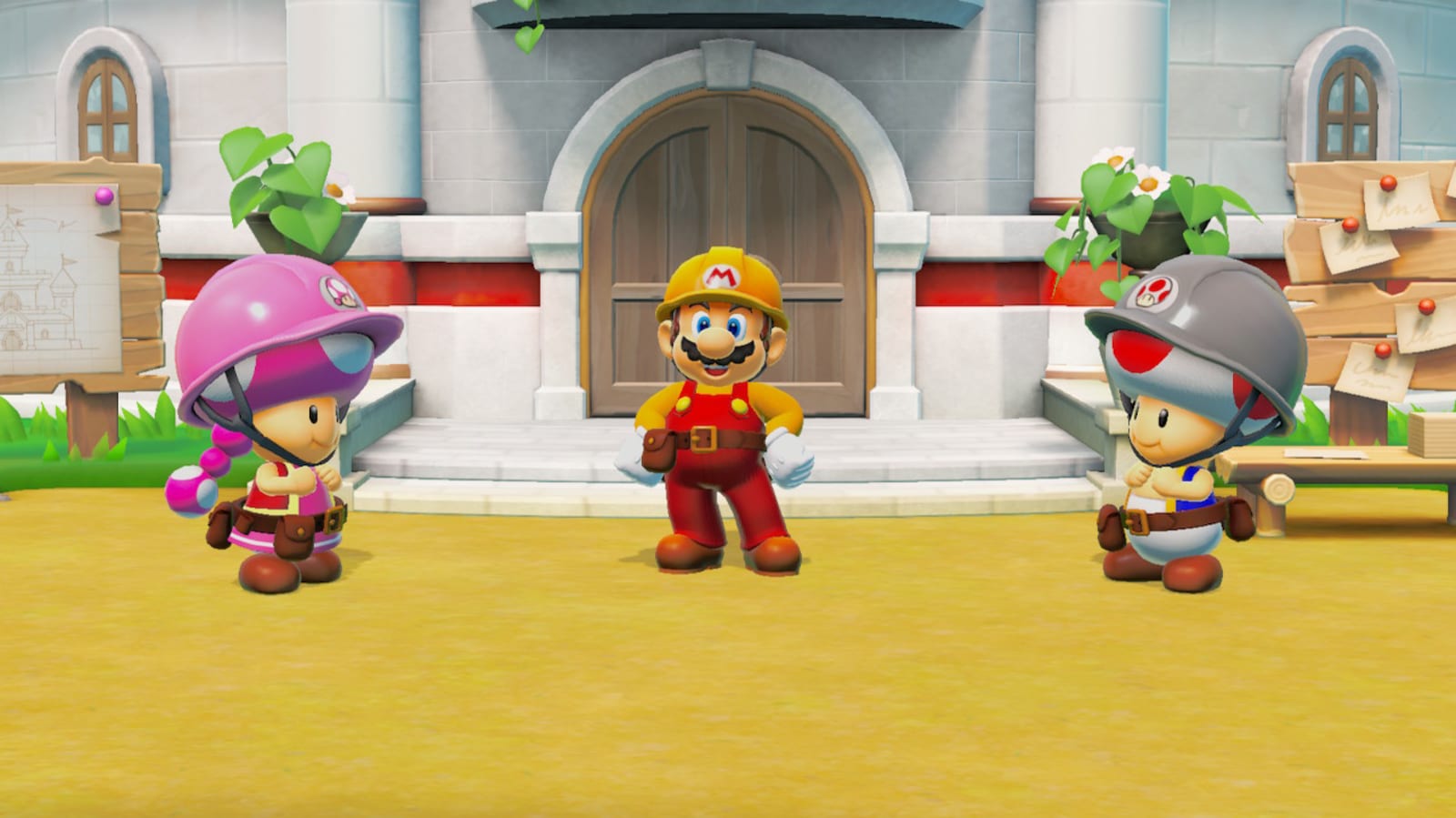 Super Mario Maker 2 hits all of my nostalgia points, so I'm probably too biased to judge it fairly. Like many children of the '80s, I grew up with Mario. I vividly remember the day I learned you could warp through pipes (and just how confused my parents were when five-year-old me tried to explain it). When compared with the endless possibilities of a modern 3D game like Minecraft, how can something focused on creating 2D platforming levels seem anything but quaint? And yet, Mario Maker 2 still feels like another Nintendo classic.

All products recommended by Engadget are selected by our editorial team, independent of our parent company. Some of our stories include affiliate links. If you buy something through one of these links, we may earn an affiliate commission. All prices are correct at the time of publishing.
View All Comments
'Super Mario Maker 2' is another love letter to Nintendo’s 2D platformers