You know what you're getting with a Smash Bros. game. A ton of iconic characters -- mostly from Nintendo, but also from the likes of Konami, Capcom and Square Enix -- battle to knock each other off elaborately-themed stages. Super Smash Bros. Ultimate for the Switch doesn't really change up this formula, but it refines it in several ways. It packs in just about everything you'd want, with a slew of modes and a ton of fighters to choose from (74 so far). And for the older gamers, the ones who grew up battling with their friends for hours on end, it's a pure nostalgia bomb.

I've lost count of just how many times Smash Bros. Ultimate made me feel like I was being thrown into a time machine. Loading up Dracula's Castle from Castlevania, gave me flashbacks to booting up Symphony of the Night for the first time. That moment feels burned into my soul, as if I instantly knew it would be one of my favorite games of all time. It happened again as I was fighting on the Midgar stage and the Final Fantasy VII fight theme started playing -- it's hard not to feel a pang of nostalgia for something I spent hundreds of hours listening to as a teenager.

Much like a Pokémon evolving into its true form, I suppose it was inevitable that Smash Bros. would end up being the ideal gaming nostalgia vehicle. The first game brought together new and old Nintendo stars like Donkey Kong, Fox McCloud and Pikachu. And once Nintendo added Sonic in Smash Bros. Brawl for the Wii a decade ago, all bets were off. The series wasn't just about Nintendo characters beating the crap out of each other, everyone was fair game. With the Wii U and 3DS entry, we got Cloud from Final Fantasy VII, Pac-Man, Mega-Man, Bayonetta and a bunch more. Now, Nintendo is also adding Simon and Richter Belmont (hence the Castlevania stage), and it's making even deeper pulls from its catalog, like the notorious Piranha Plant from Mario. 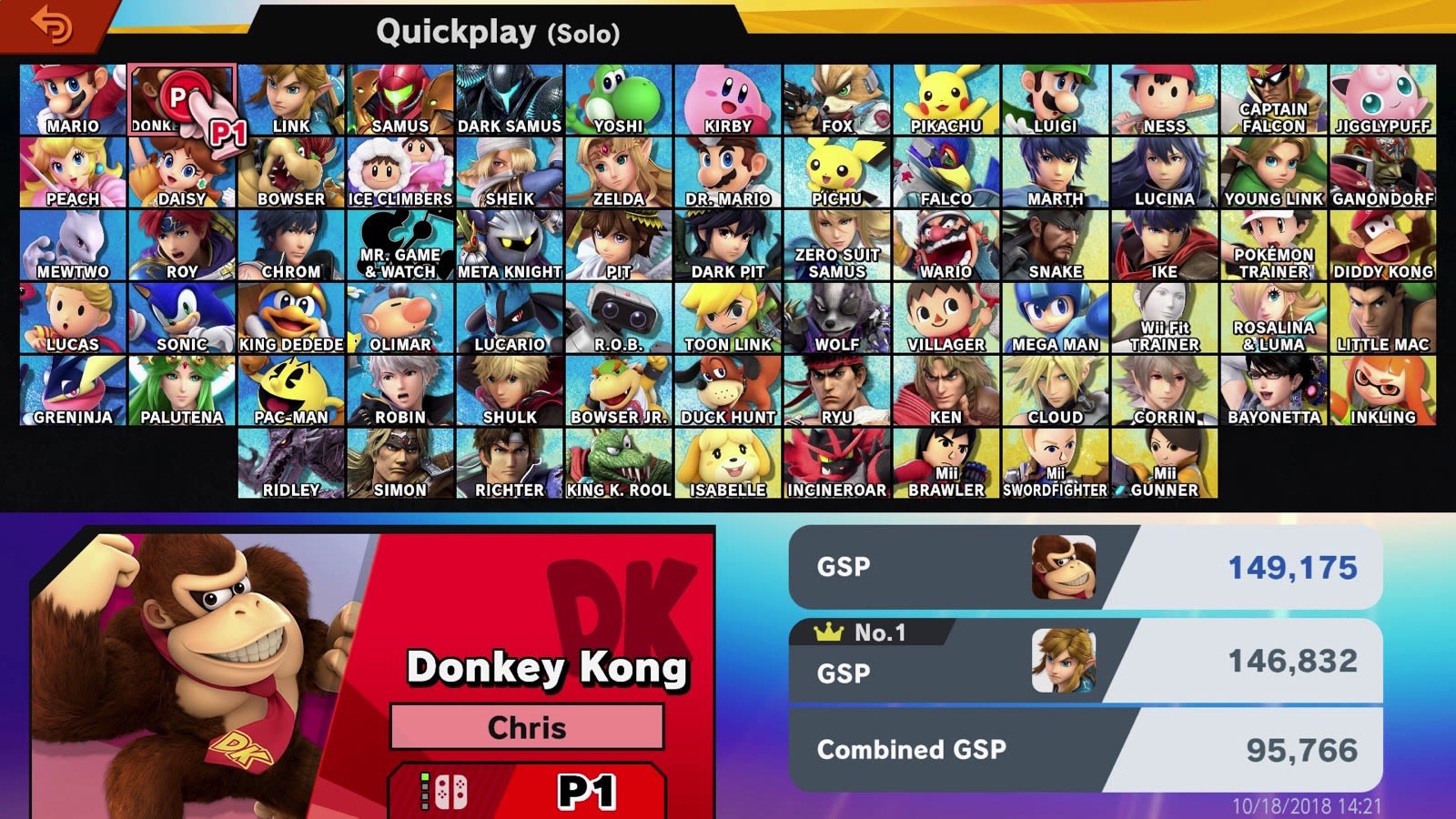 Even the mere act of playing Smash Bros. Ultimate feels like a blast from the past. Similar to Street Fighter, once you learn how to play Smash, you never really forget. Characters still move slowly around the stage, and jumping at times feels like you're floating. But it's incredibly tight and responsive when going toe-to-toe with your opponent. While it felt like there was a huge element of luck in previous Smash versions -- it was tough to tell when an attack would connect, and items could easily swing a battle -- Ultimate is better at reflecting your actual skill as a fighter. In heated battles against the computer (I didn't get to try out online play, unfortunately), I felt like I had more direct control over my character, which made every win and loss more meaningful.

The series has always been renowned for its beginner-friendliness. It's easy to just pick up and start fighting since everyone shares a basic move list. But you'll also be rewarded for learning the intricacies of every character, and how to deftly move around and defend yourself. I'm pleased to see that Nintendo isn't changing the formula too much. Getting too bogged down in special moves and archaic systems has hurt other fighting franchise (hello, Street Fighter), but Smash Bros. has always toed the line of being both simple and surprisingly deep. 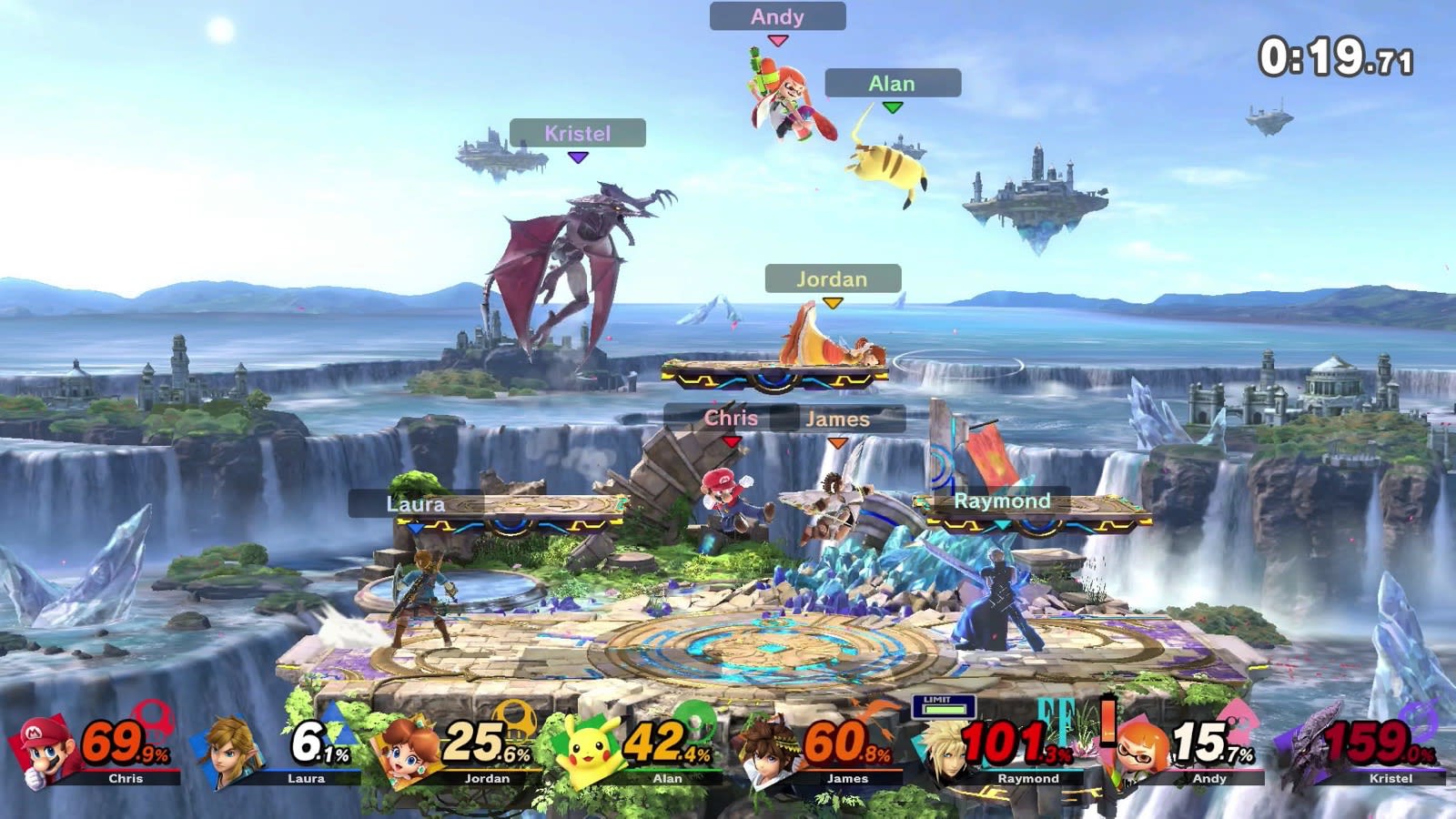 Smash Bros. Ultimate's sprawling single player campaign, "World of Light," puts Kirby on a quest to save all of the other characters after they've been turned into spirits by an army of Master Hands. Don't worry, the plot isn't very important. Kirby has to battle his way through an enormous map that feels reminiscent of Super Mario World, rescuing possessed versions of his friends along the way. Once you defeat them, they're added as playable fighters for all of the game's modes.

Nintendo also added another layer of complexity with primary and support spirits, deeper cut characters from the same games as the core fighters. So far, my roster includes the likes of the Guardian from Breath of the Wild, Gravity Suit Samus, and Blaze the Cat from Sonic. By pairing these characters to your fighter in World of Light, you get special bonuses, like a buff to your stamina, or the ability to have items drawn slightly towards you. Spirits also level up and have power levels, which seems to affect the strength of your fighter. If that sounds confusing... well, it is. But thankfully, you can also just hit "Y" in your party screen to automatically equip the most useful spirits for every fight. 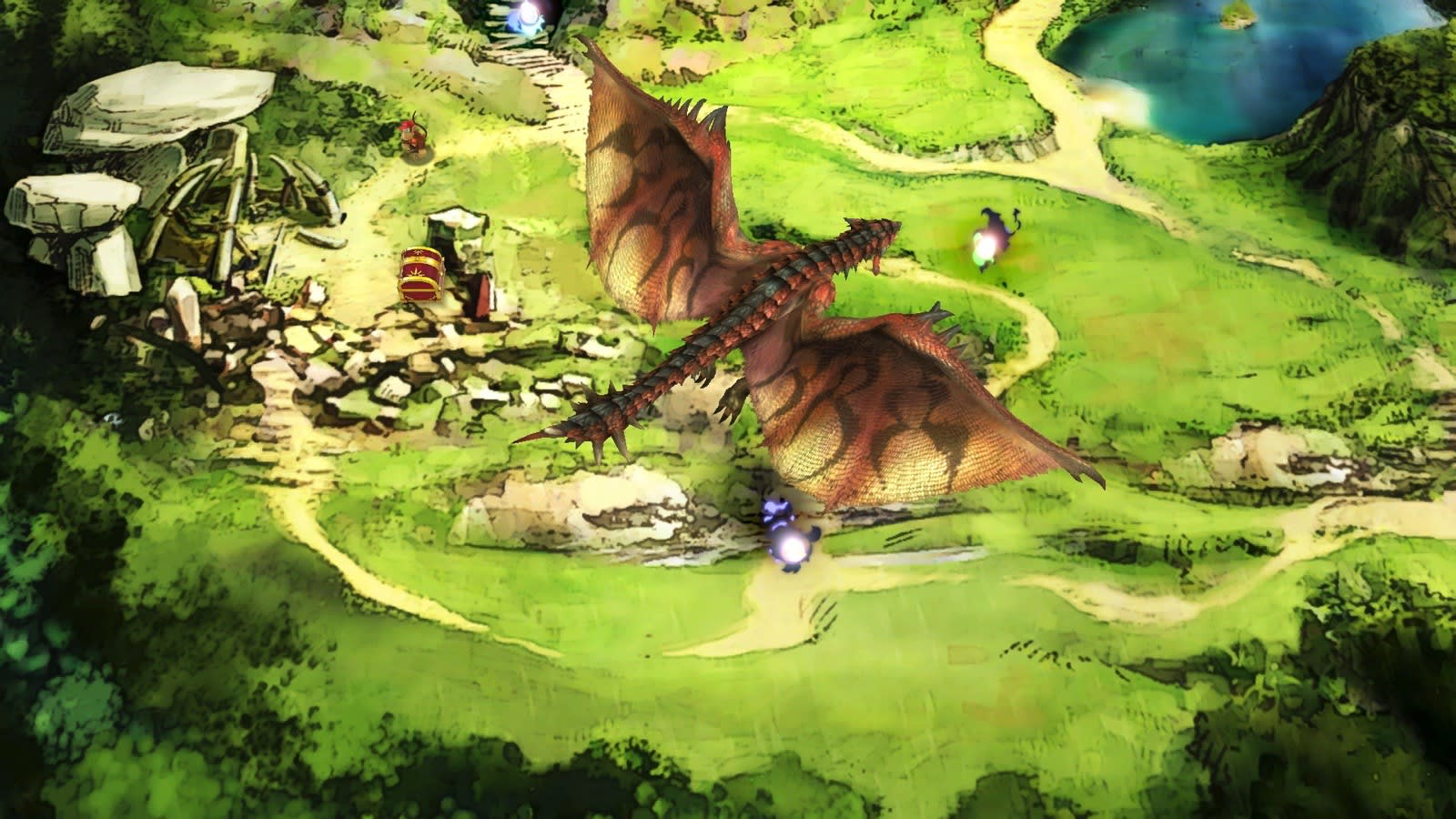 A small portion of the World of Light map.

Even if the story doesn't make much sense, I enjoyed fighting my way through World of Light. It's a more compelling way to acquire new characters than waiting for a new challenger to appear as you fight in other modes. The matches are also more interesting, since your opponents also have spirits of their own. That means you could end up fighting a giant Donkey Kong, an Isabelle (from Animal Crossing) that's constantly healing, or an army of Mr. Game & Watch. Some matches are genuinely difficult, and similar to an RPG, you might have to wait for your array of spirits to get stronger before you can emerge victorious. 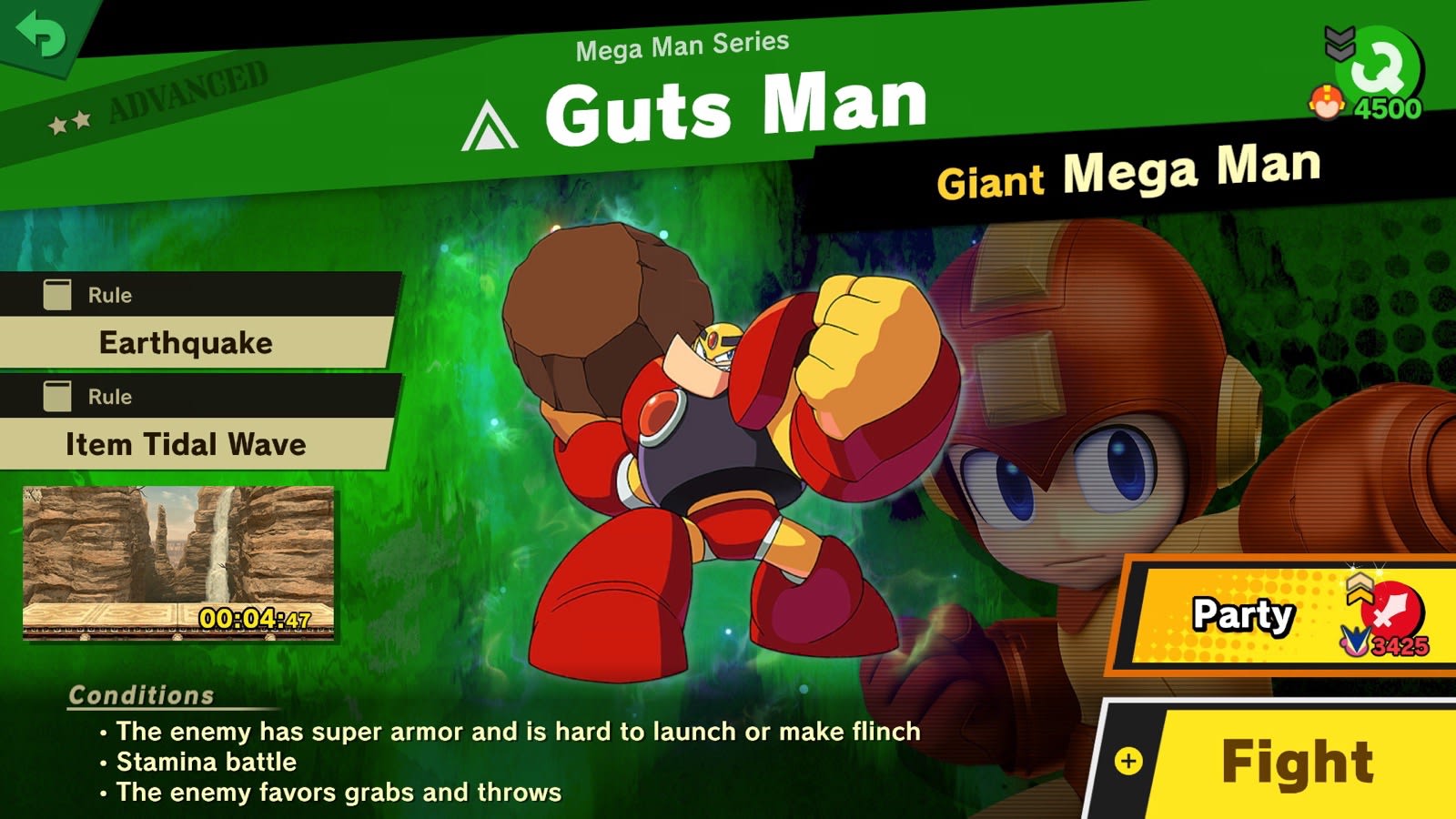 You can also rescue support characters from the Spirit Board mode, which basically offers you direct access to the fights you'd see in World of Light without the world map. There are a few twists, though: The spirit battles are only available for a certain time, so if you really want a specific character, you're pretty much forced to fight as soon as it appears. There are also a variety of difficulty levels for every battle, which are clearly labeled before you jump in. Once you win the fight, you also have to free the spirit from its prison with a well-placed blaster shot. If you miss, the fight goes away and you'll have to wait for that spirit to reappear.

It's not surprising that Nintendo is investing more in the single player experience, since it gives you something to do with the game when you're away from friends and the internet. After spending a few hours in World of Light, I've only made a slight dent on the map, so I'd wager it could easily last dozens of hours. The Spirit Board, meanwhile, offers a quick hit of action for players on the go. 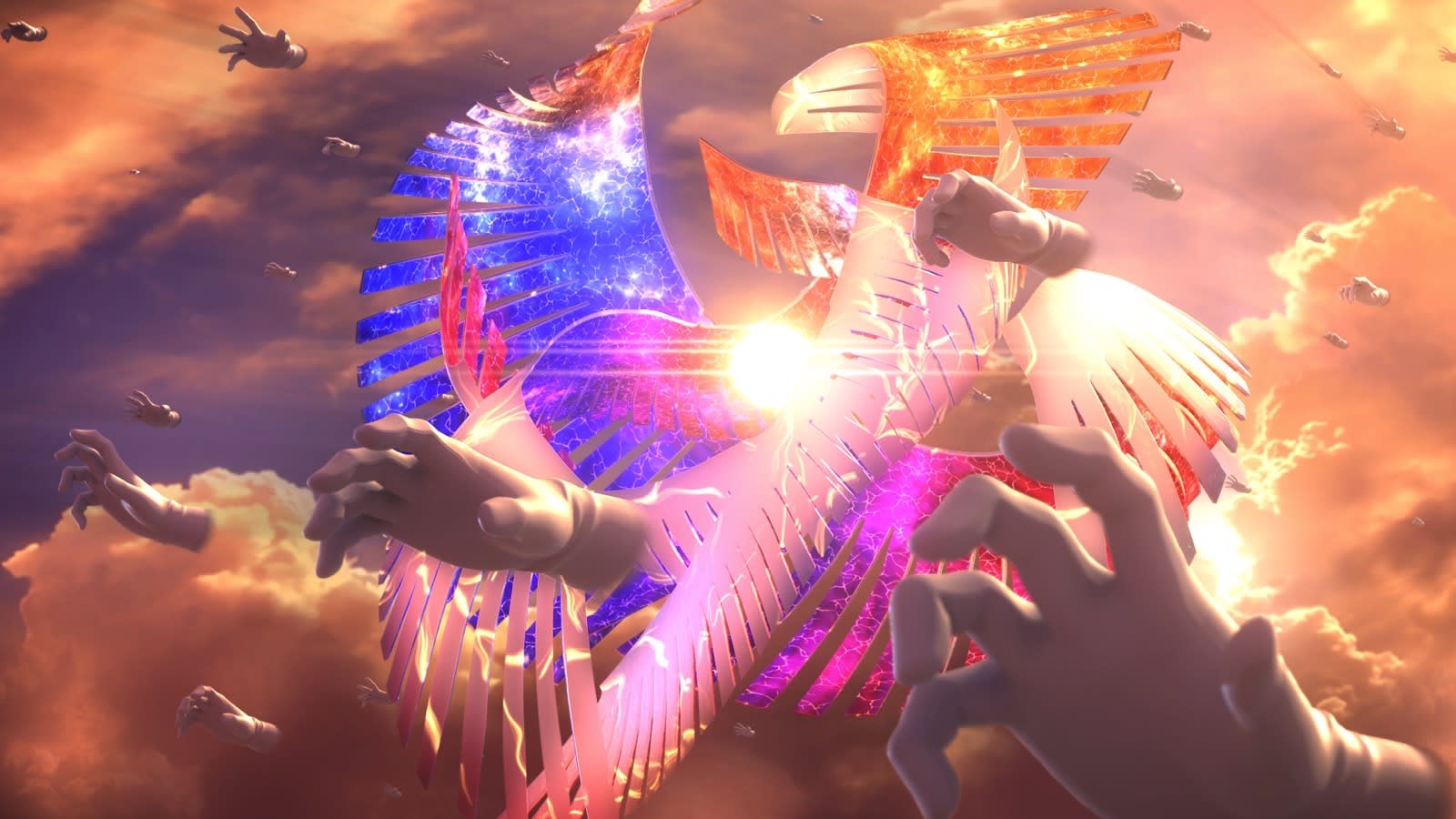 I bought both of the previous Smash Bros. games for the Wii U and 3DS, but I never got into them. I didn't have enough friends nearby to play local multiplayer on the Wii U, and the online play was buggy and not much fun. And while it was cool to see the series on the 3DS, that device's small screen made it hard to keep track of all the mayhem. Thankfully, the Switch's display is big enough for handheld play. And since it's a console people are actually buying, I'm looking forward to some local Wi-Fi battles around New York City. I'm also hoping that the Switch's online service is robust enough to handle the gameplay.

Super Smash Bros. Ultimate really is the series at its best. It's hard to imagine how much bigger the next game can be without imploding on itself. Ultimate has everything I've ever wanted, and, unlike its predecessor, it's on a console with a vibrant player community, so it'll be something I'll be able to play for years. And while it's already a nostalgia bomb in its current form, I'd imagine it'll be an even more powerful one in a few years, when I'm playing alongside my daughter as she relives the same gaming experiences I grew up with. "A new challenger approaches," indeed.