If you like Smash, you’ll love 'Super Smash Bros. Ultimate'

But meh to the new single-player campaign.

It was inevitable that a new Nintendo console would spawn another installment in the storied Super Smash Bros. series. And now we're just weeks away from the return of the fun and frantic fighter that's been responsible for countless smiles, frayed friendships and broken controllers. Super Smash Bros. Ultimate has far more characters and stages than any of the preceding releases, but the general gameplay formula has merely been tweaked and tuned. That's exactly what we all want, of course, and as a side-effect it gave Nintendo the time to focus on single-player aspects much more than it's done before.

Last week I headed to Nintendo's UK base to hear a bit more about the game and experience the single-player firsthand. Where Smash Bros. has been undeniably one-dimensional in the past, Nintendo wants this one to be a bit more accessible. Basically, the idea is that when you're not taking names online or among friends, there's other stuff to do. Maybe you're just not that competitive to begin with. And it doesn't matter if you never indulge in a multiplayer brawl. However you want to play the game will be rewarded with new characters, stages, etc.

There's what you'd call a classic arcade mode, where you take on a handful of computer-controlled opponents in successive one-on-one bouts until you reach a huge, unplayable boss type. At the beginning of your run you select a difficulty from 1-10 and it'll dynamically adjust between matches based on your performance, so it should never be too hard. The boss could be a robot dragon or some other cartoonish monster, and there are rare ones for particularly hard, clean runs. You negotiate their attack phases like your standard platformer bosses until you wipe out their health bar. If you die, no big deal. You can just continue from the moment you died. 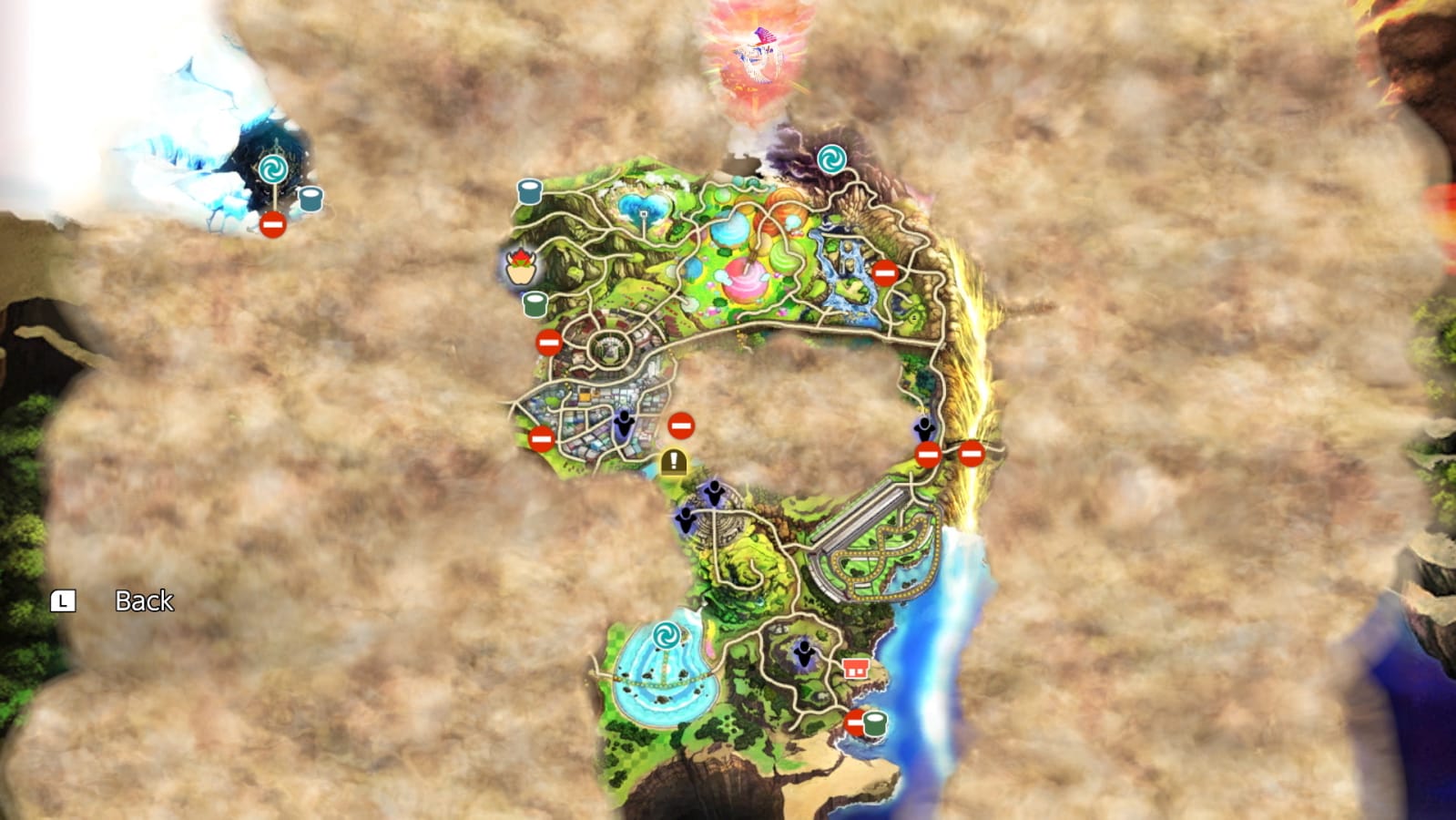 A zoomed-out view of the World of Light map

The meat of this new focus on single-player fun is a sort of campaign called "World of Light." I believe there's some far-fetched story attached to this -- I wasn't party to any opening cutscenes -- but the basics are: You walk around a Super Mario World-style map jumping from one battle to the next, collecting what are called Spirits. So... Spirits are characters from video game lore that are represented by Smash Bros. fighters with certain special characteristics. The Spirit of a Guardian from the latest Zelda game, for example, could be represented by a Mario with a permanent metal power-up.

It's hard to explain because you kind of have to just go with it. In one Spirit battle, you might have to fight ten weak Peaches because that's vaguely relevant to some character from Advance Wars, or one large Donkey Kong who is particularly susceptible to projectile attacks because Pokémon. Whenever you win a battle, you collect that Spirit and add it to your library. You can then assign that Spirit and it'll either passively or actively buff your fighter. It may also have its own slots you can fill with secondary Spirits that have their own advantages. The Spirits gain levels the more you use them, and a separate currency earned through successful battles can be spend on a skill tree that provides yet more character buffs. 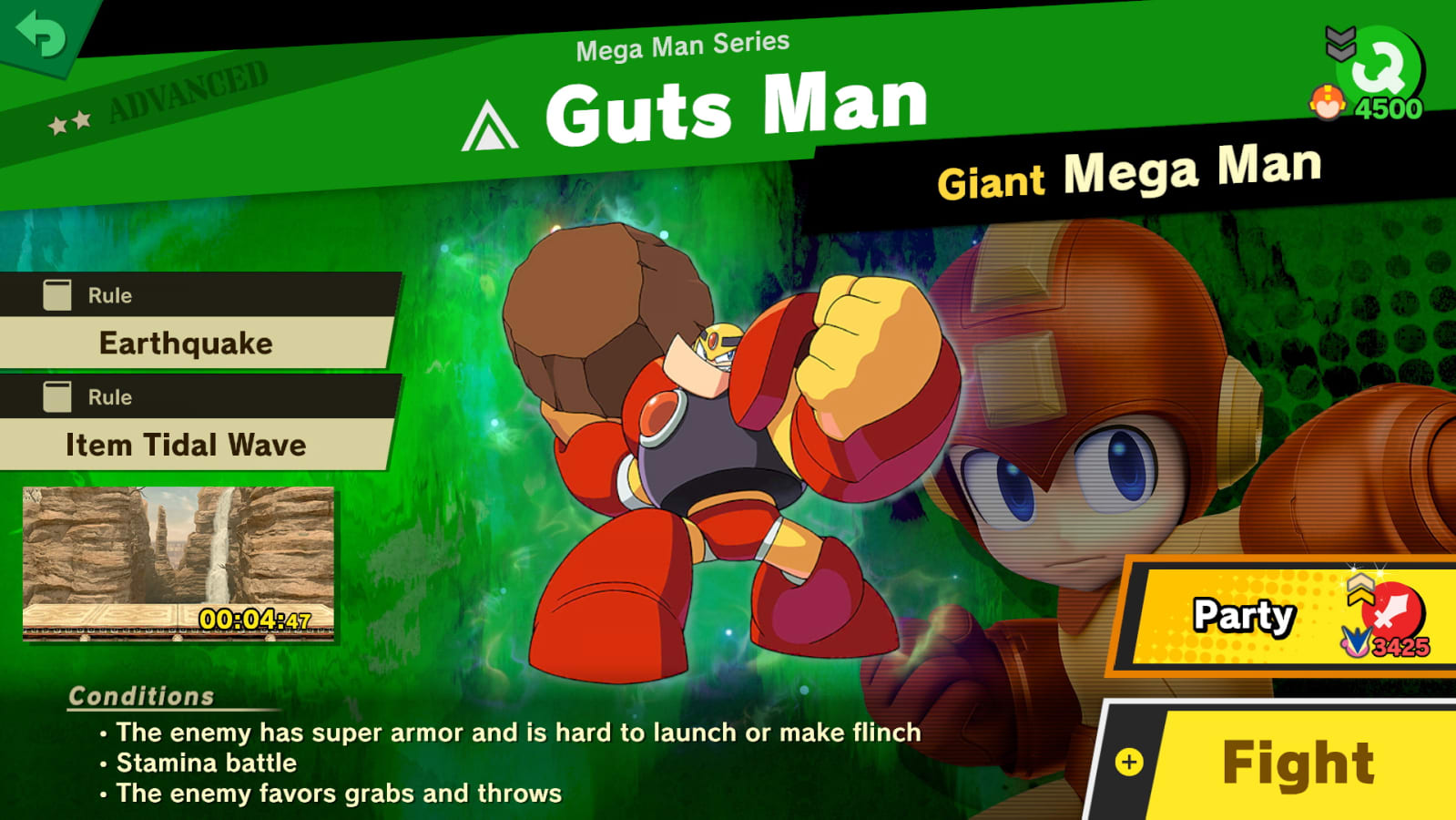 Each battle is almost like running into Pokémon Trainer, but you get to see what you're up against beforehand. The Spirit battle might feature say, Fox, and he does more damage than usual, but he's also slow and is really fond of his up + special attack. He also has a weakness to weapons, like swords and mallets. You start World of Light as Kirby, and slowly unlock more characters as you traverse the world, but let's say I use Kirby for this fight. I'll look through my Spirits and find one that reduces damage taken (to account for Fox's damage increase), and also has a slot so I can equip a secondary spirit that puts me into the fight with a laser sword already in hand (taking advantage of Fox's weakness). I can keep my distance with the sword, do more damage with it and I don't really need to worry about anything else, because Fox is more sluggish than usual as it is and his up + special attack has a long start-up time, so I can dodge or counter it easily.

That's basically how every one of these fights goes. You look at the strengths and weakness of the opponent, equip Spirits to counter or exploit them, rinse and repeat. You can press a single button and let the game auto-equip the most appropriate Spirits for you, and you'll be warned if what you've manually selected isn't right for the battle. It's an idiot-proof system, which is great if you can't be bothered with the Spirit admin. But then what's the point if the strategic element can be ignored with one button press?

In addition to World of Light, there's another mode called Spirits Board, which is much the same but has more of a pick-up-and-play vibe. You just look through a selection of cards with different Spirits and difficulties listed on the front, pick one and jump straight into the Spirit battle. You can then use the Spirit in the World of Light mode.

I've gotta say I don't really get the whole Spirit thing. It's mostly bait for completionists. The World of Light map is huge, so there are probably hundreds of these little battles across the world. And Spirits are like any other finite collectible. Also, every battle is just a short Smash Bros. bout with a custom rule set. Sure there's the RPG element of picking your power-ups beforehand but in the end, you're just playing Smash Bros. against the computer. There's nothing new here. 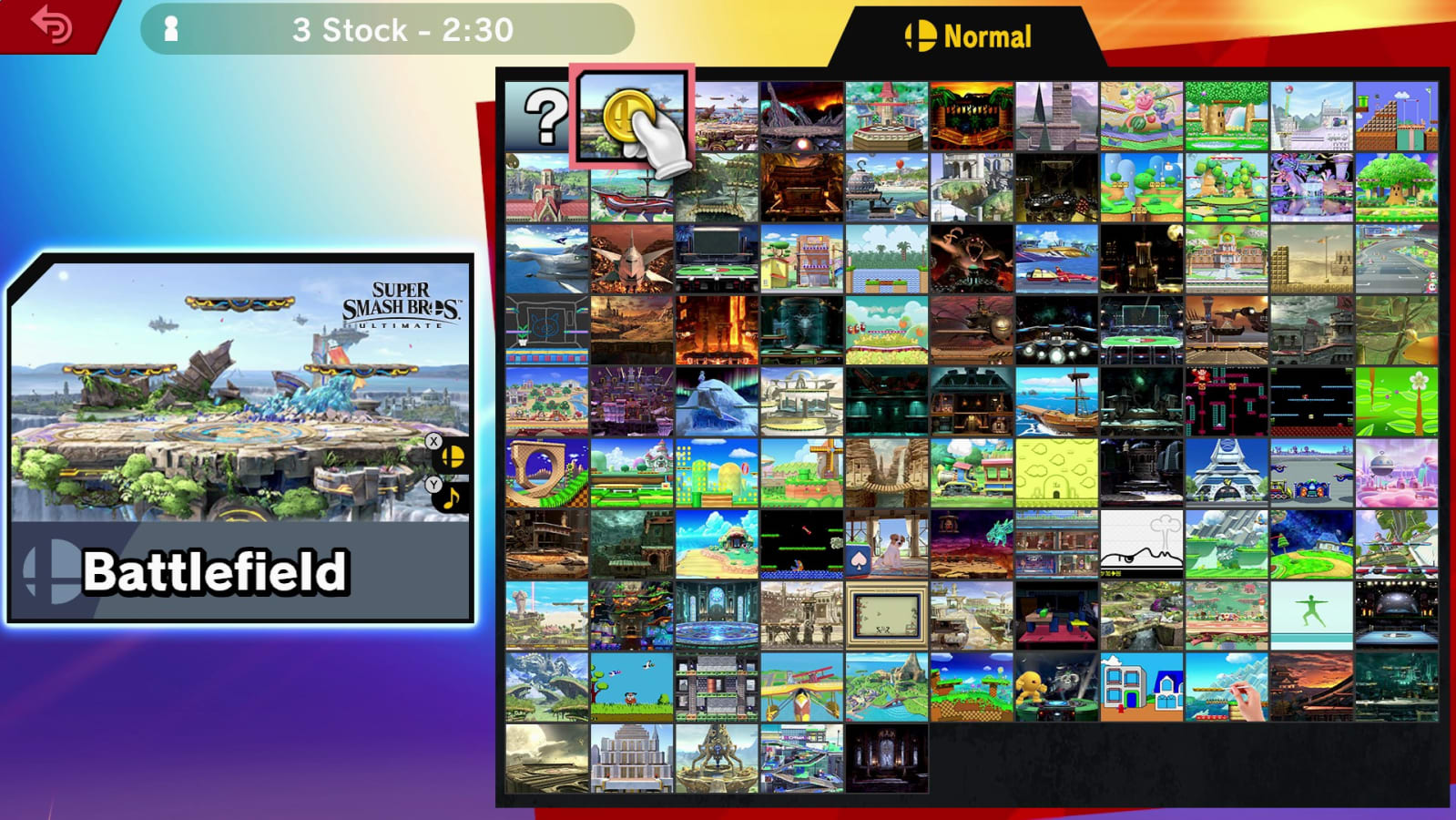 I don't have much to say on any other modes or features, because Nintendo is very specific about what you can and can't do at these types of media briefings. I was allowed to play the classic arcade-type mode, World of Light and Spirits Board for roughly 15 minutes each. I wasn't allowed to see any of the menus -- the Nintendo people literally take the Switch out of its dock and press buttons for you -- but I did get some quality time with bread-and-butter multiplayer.

Another journalist and I played a few one-on-one matches, messing around with the new characters and items, checking out the new stages. We were shown the Stage Morph feature, where you can pick two different battlegrounds and they switch halfway through the match. I talked to the Nintendo guys about how much I hated the random tripping mechanic in Super Smash Bros. Brawl for the Wii, and how the pace of this new game is close to that of Melee on the GameCube. They explained how edge guarding is harder and the cooldown on air dodges is longer, among other mechanics. I wrote some notes while the other journalist got some direct capture footage. 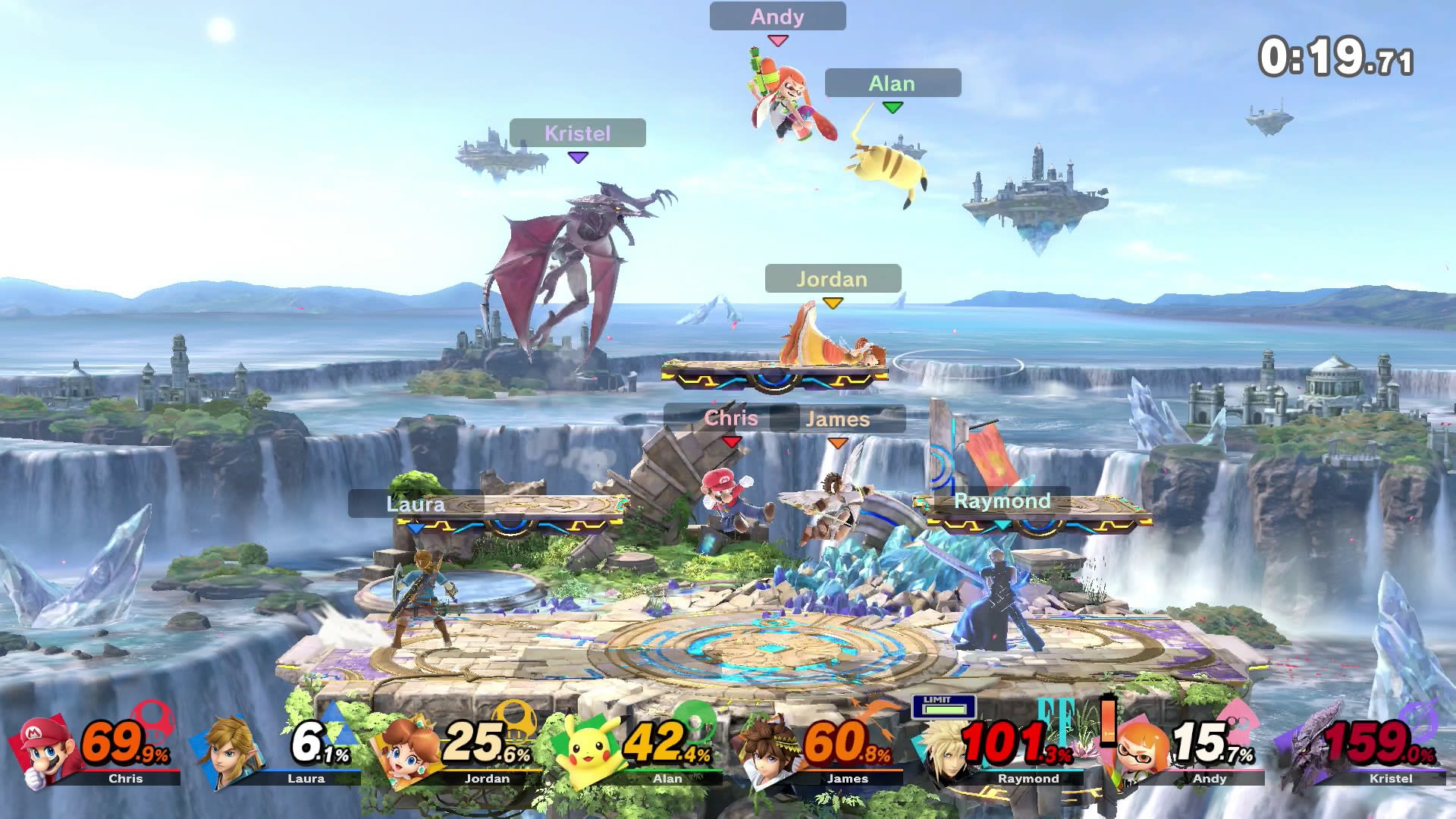 It was around this point that we had exhausted the structured program and formalities of the briefing, and there was a sort of half-spoken: "Shall we actually play some Smash now boys?" We drew four chairs up, real close to the TV, turned items off, picked some proper stages, and had a few games. No longer were we talking about the RPG elements of Spirits. Instead, I was screaming "bullshit!" as an obviously overpowered move sent the screen into slow-mo just before my character was dive-kicked to death. We negotiated alliances, and huffed as they were nigh immediately broken with a cowardly turnip throw. We edged forward on our chairs, gripped the controllers ever tighter and growled in rage as we were clearly bullied for having one more stock than anyone else. Finally, we were playing Smash.

I ended up staying for nearly an hour past my scheduled briefing slot -- one more game, I kept telling myself. If I'd been restricted to World of Light or one of the other single-player modes, that wouldn't have been the case. My first impression is, if you're a Smash Bros. fan, you're almost certainly going to love this game. But if the cartoonish brawling has never really been your thing, the new single-player options like World of Light won't change that. In the end, you're still playing Smash. You're just manually equipping cheats and playing against the computer.

All images courtesy of Nintendo.