Honda's e Prototype is designed to delight you

I fell in love with its cute, compact design at the Goodwood Festival of Speed.

There's only one word that accurately describes the Honda e: adorable. The pop-out door handles. The compact wing mirrors that are actually tiny cameras. The simple, oval-shaped front that houses the Honda badge and two bright, circular headlamps. From every angle, it's just freakin' cute.

And I think that's by design. The tiny hatchback is clearly built for urbanites who want something small, nippy and, by extension, joyful to drive. It will ship with a 35.5 kWh Lithium-ion battery, which can manage -- at least by contemporary EV standards -- a rather pitiful 200KM (roughly 124 miles) on a single charge. That's substantially less than many of its rivals, including the new Renault Zoe (242 miles) and Nissan Leaf e+ (226 miles). But the Honda e's conservative range probably doesn't matter. Most people city dwellers, after all, rarely drive more than 200 miles per day.

Honda is banking on something else to sell its first fully-electric car: joy. The runaround is rear-wheel drive, for instance, which gives the car some "sporty character," according to Honda, and a ridiculously small turning circle of 4.3 metres. That figure will mean little in most US cities, which are known for their huge parking lots and wide, open roads. But in Europe -- a continent filled with tight streets and back alleys -- that maneuverability will be both practical and grin-inducing. The car has a perfectly even weight distribution, too, which should keep the handling razor sharp.

And then there's the technology. The Honda e has five -- yes, five -- screens to peer at inside. The outer two show what the aforementioned side cameras are seeing. Another, tucked behind the steering wheel, will show the current speed, remaining charge, and other information that's critical for the driver. The final two, positioned roughly in the center, will be for navigation and general infotainment. They all sit on top of a wood-like material (I'm pretty sure it's a veneer) that looks purposefully old-fashioned. It's a strange, but effective blend of futurism and Honda brand nostalgia that I can't help but love.

As the car cruised past, I couldn't help but smile and wave.

At the Goodwood Festival of Speed, I watched the Honda e take on the world-famous hillclimb. It was, to be perfectly honest, one of the slowest drives I've ever seen at the show. So slow, in fact, that both the driver and passenger were able to roll down their windows and wave at the crowd. I'm sure the car can move a little quicker -- reporters have guest-imated that the can go from nought to 60MPH (roughly 97KMH) in eight seconds. But it didn't really matter. As the car cruised past, I couldn't help but smile and wave back at them, just like every good Brit does when a child or family waves from a passing boat or train. 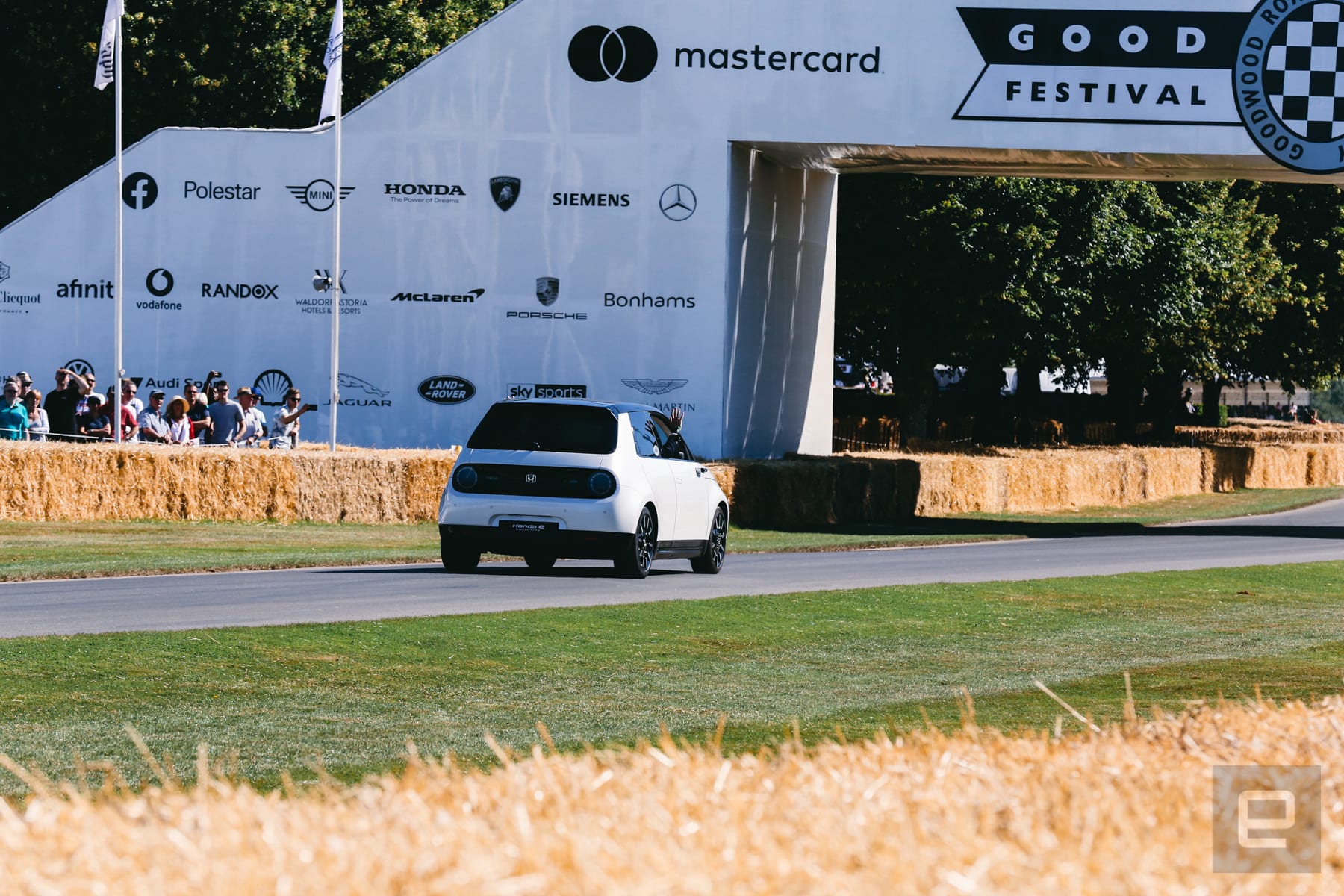 Honda's compact EV should be no slouch to charge, either. With a CCS2 DC rapid charger (the car also accepts a Type 2 AC connector) Honda says you can get back 80 percent of the car's maximum range (so roughly 160KM) in half an hour. Again, it's the sort of figure that Honda hopes will delight you.

For now, the car is just a prototype. The company says that little should change in the production version, though, which will be available to order later this year in five colors, including a striking metallic yellow. The success of the Honda e will depend, inevitably, on its yet-to-be-announced price tag. The car's range will be a disappointment to some and a deal-breaker for others. If the hatchback is priced low enough, however, it could tempt city slickers who, like me, have already fallen in love with its looks.

All products recommended by Engadget are selected by our editorial team, independent of our parent company. Some of our stories include affiliate links. If you buy something through one of these links, we may earn an affiliate commission. All prices are correct at the time of publishing.
View All Comments
Honda's e Prototype is designed to delight you