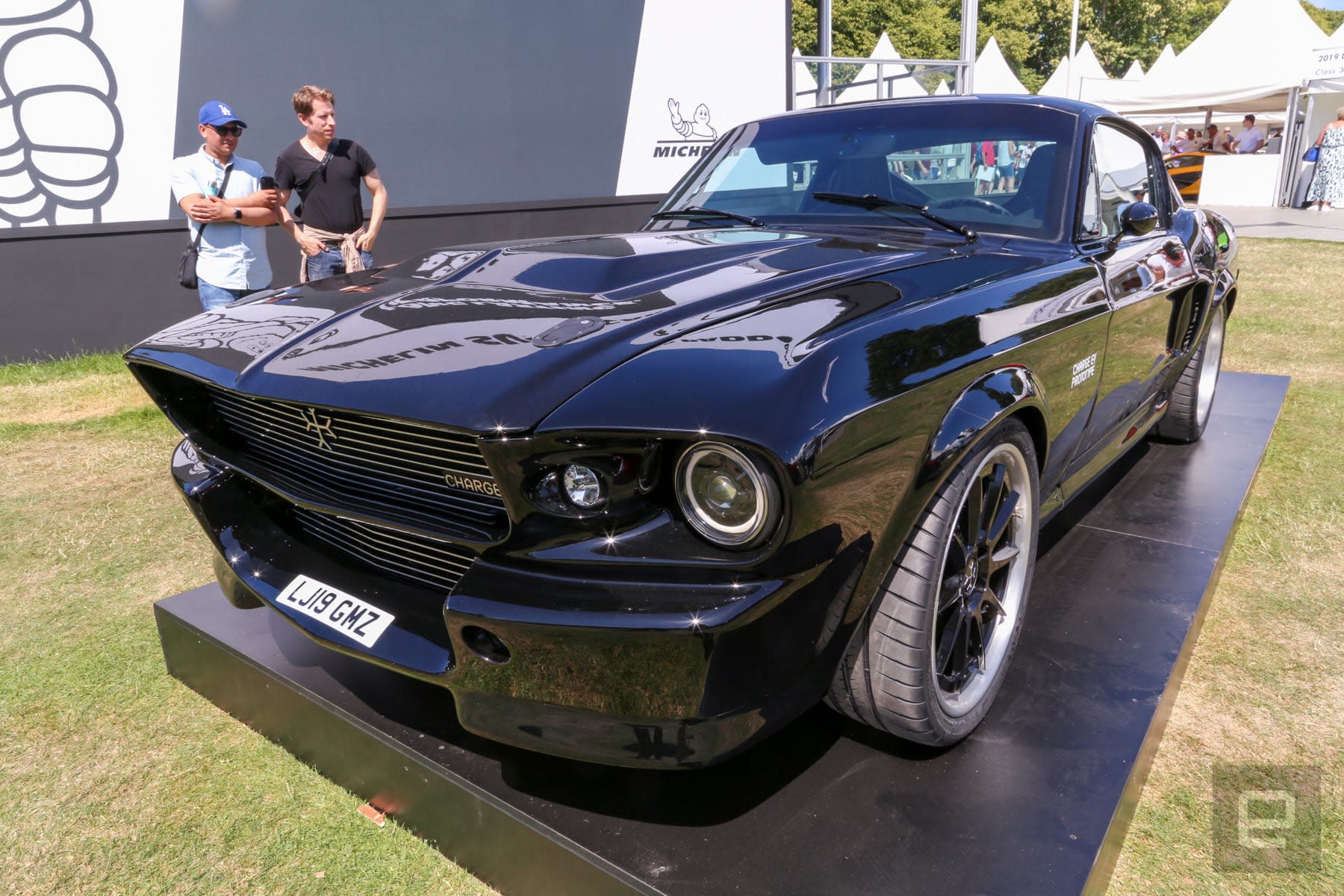 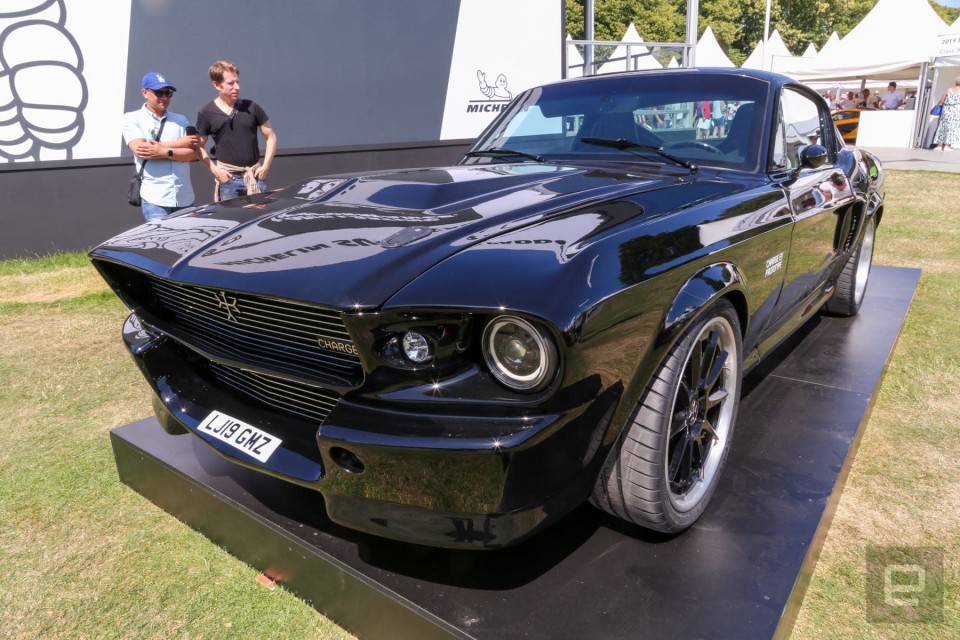 Charge's electrified Mustang is controversial. The original, after all, is an automotive icon that many associate with 'American muscle,' a sub-genre of cars that growl loudly and consume gasoline like water. The Mustang before me, however, does neither of those things. It's powerful, yes, but runs on batteries and will, presumably, be whisper-silent on the road. For some, the combination is an attractive blend of technology and 1960s design. For others, it's a monstrosity that betrays the Mustang heritage.

From afar, the car looks like nearly identical to its more than 50-year-old inspiration. Charge is building its electric road warrior with officially licensed Ford Mustang shells from the 1960s. The basic shape and bodywork is, therefore, indistinguishable from the original. Look closer, though, and you'll notice the Charge badge -- a cross-shaped symbol that resembles a snowflake -- on the hood, trunk and wheels of the vehicle. The front and rear lights have been updated, too, and the exhaust pipe has obviously been thrown out. It's a unique refresh that, against all odds, straddles the line between modern and vintage design sensibilities. 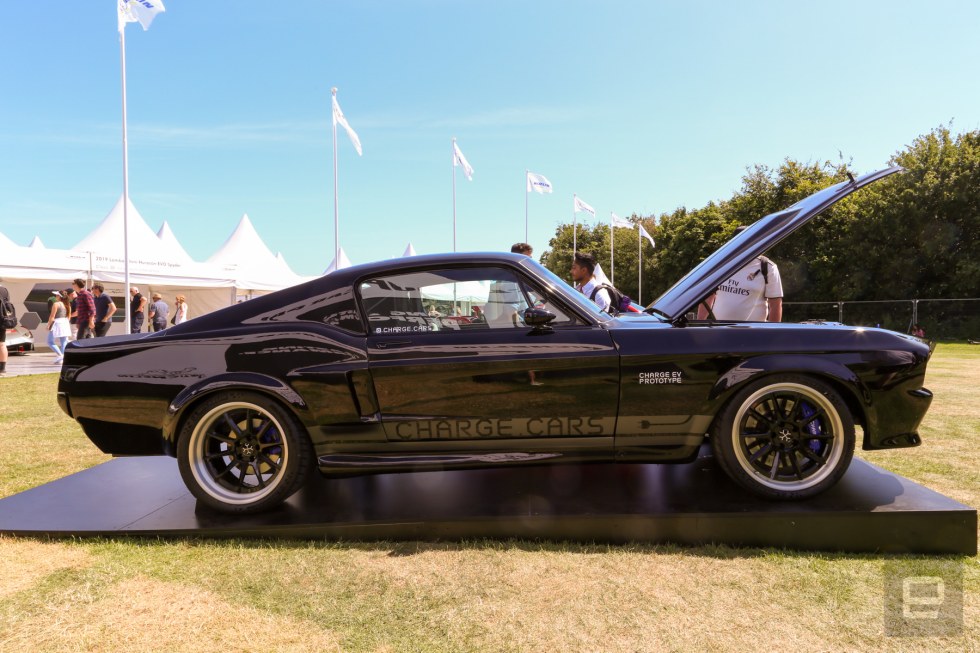 Unfortunately, the car I saw at the Goodwood Festival of Speed wasn't moving. Charge is promising performance levels, though, that are worthy of the Mustang name. The final version will, for instance, have a top 'V-max' speed of 149MPH (240KPH), the company claims, and a nought to 60MPH (97KMH) time of under four seconds. A 64 kWh battery will take the car 200 miles on a single charge, which is low by luxury EV standards (the standard Model 3, for comparison, has a 220-mile range) but strangely fitting for a car that, at least outwardly, is imitating American muscle.

So why the Mustang? Well, Charge knew it would be a head-turning project. The car's enormous size, though, also made it easier to squeeze in all of the necessary EV components. An old Jaguar E-Type or Mini would have been considerably harder to pull off. "Yes, [a Mini] is too small, Vadim Shagaleev, CEO of Charge told Engadget. "That's almost impossible."

There is, of course, one huge advantage to owning Charge's Mustang over the 1960s original: reliability. "It's a well known fact that it's very difficult and problematic to drive old classic cars," Shagaleev added. "They're unreliable and always smoky and leaking. There are just plenty of problems." Charge's version, meanwhile, is effectively a brand-new car powered by modern and, hopefully, more reliable components. Owners should, in theory, be able to drive the car every day and spend minimal time, if any, cooped up in their garage with various tools and oily rags.

There will always be people who prefer the original and want to spend their weekends repairing and restoring a classic car. And that's fine -- Charge knows its electrified Mustang won't be for everyone. If you do fancy owning this unusual and somewhat eco-friendly vehicle, though, there's a reservation form online. Be warned, though: only 499 cars are being made, and each one has a starting sticker price of £300,000 (roughly $377,000).

In this article: Charge, electric, electric car, electric vehicle, Ford Mustang, Mustang, tomorrow, transportation
All products recommended by Engadget are selected by our editorial team, independent of our parent company. Some of our stories include affiliate links. If you buy something through one of these links, we may earn an affiliate commission.