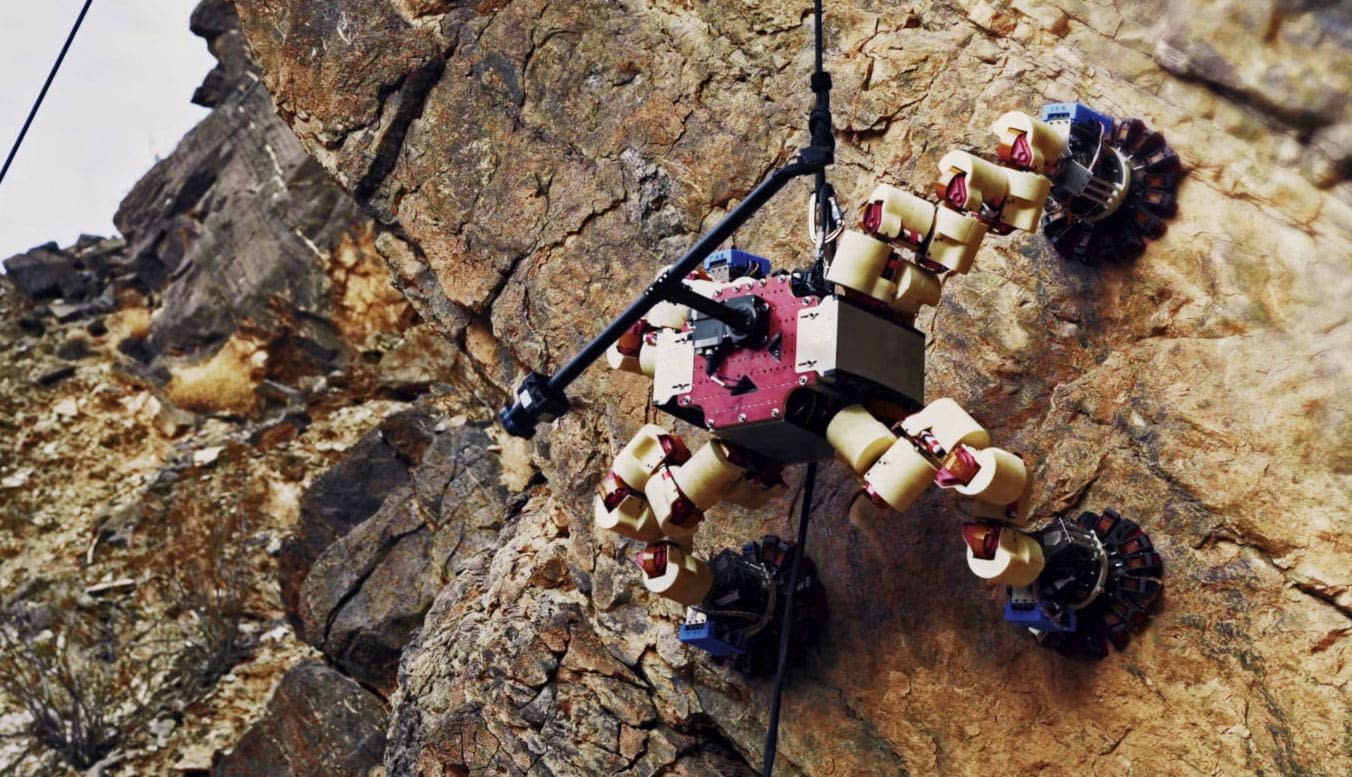 While rovers like Curiosity are doing a bang-up job exploring extraterrestrial terrain, they don't have the capability to scale cliffs and other hard-to-reach places. That's a job best left to climbing robots like LEMUR, a technology developed by engineers from NASA's Jet Propulsion Laboratory. JPL's engineers spent years refining the machine, which was originally conceived as a repair robot for the International Space Station. Now, the LEMUR (short for Limbed Excursion Mechanical Utility Robot) project has concluded, but not before JPL conducted a final field test in Death Valley, California.

JPL sent the last version of LEMUR up a cliff earlier this year. The robot's AI chose its own route, and it used the hundreds of tiny fishhooks embedded in each of its 16 fingers to climb up. All while its science instruments scanned the rock for ancient fossils. LEMUR was able to climb up to its goal and find fossilized balls of algae, which once inhabited the sea that used to be in the area. Those fossils are around 500 million years old, proving the robot's ability to detect signs of previous life -- an important capability for machines exploring other planets.

Although the LEMUR project itself is over, it has inspired and given rise to other climbing robot initiatives already in the works. JPL's Ice Worm was adapted from a single limb of the LEMUR robot and is meant to climb ice walls in frozen worlds, like Saturn's moon Enceladus. RoboSimian, originally built for DARPA's Robotics Challenge as a disaster-relief robot, has four limbs like LEMUR.

The Underwater Gripper is pretty much one of LEMUR's limbs with the same fishhook-powered grippy fingers built for underwater exploration. Even the Mars 2020 mission's helicopter will have a perching mechanism adapter from LEMUR's grippy feet so it can cling to cliffsides. It only means that even though the LEMUR robot itself won't be making its way to outer space, technologies derived from the project will help us explore worlds outside our own.

In this article: lemur, nasa, robots, space, tomorrow
All products recommended by Engadget are selected by our editorial team, independent of our parent company. Some of our stories include affiliate links. If you buy something through one of these links, we may earn an affiliate commission.