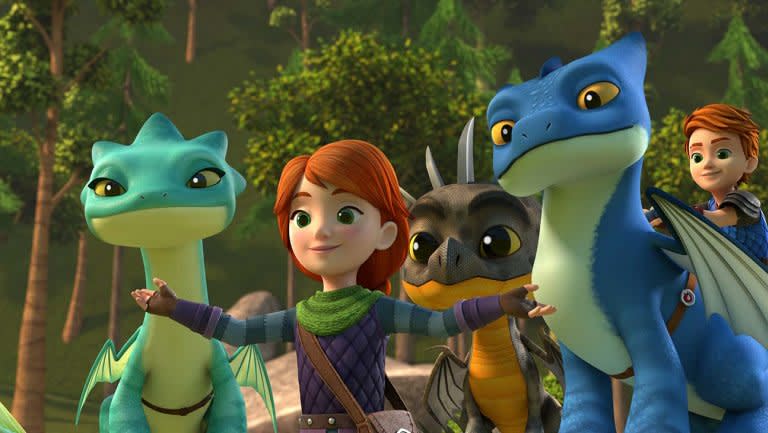 Netflix is expanding its selection for tots. The streaming giant announced today that it would be adding seven new shows, all geared towards children between the ages of two to six-years-old. Included in the new lineup is DreamWorks Dragons Rescue Riders, a CG-animated follow-up to DreamWorks Dragons: Race to the Edge, another Netflix series in the How to Train Your Dragon franchise for slightly older kids.

The other shows are a variety of live-action and animated fare. Sesame Street producer Liz Keyishian will present the live-action show Izzy Bee's Koala World, about an 11-year old "koala whisperer" who lives on an Australian island. Emily's Wonder Lab, which stars science expert Emily Calandrelli, will introduce kids to science experiments and activities. What-To-Doodles is about a group of adventurers and is story-edited by Bob the Builder writer Doug Wood. Preacher producer Jason Netter will bring an animated superhero show called StarBeam to the service. The lineup will also feature shows based on children's books. Hello Ninja is an animated series adaptation of the book by N.D. Wilson, and DreamWork's Go, Dog, Go!, is derived from the classic children's picture book by P.D. Eastman.

Melissa Cobb, vice president of original animation at Netflix, said the aim with the new programming is to help "young people find and connect with the stories and characters they love." The streaming giant has been steadily expanding its offerings for the elementary school set as it works to compete with Disney's upcoming streaming service. Earlier this year, Netflix acquired the popular Storybots brand. The company partnered with DreamWorks to release three more animated shows, including the just-released Archibald's Next Best Thing, as well as Gabby's Dollhouse and Rhyme Time Town (both due in 2020). So far, Netflix's efforts in children's programming have paid off on the red carpet. Back in May, the streaming giant bought home the most Daytime Emmys for kids TV -- beating out PBS and HBO.

In this article: av, childrens tv, entertainment, How to Train Your Dragon, izzy bee's koala world, netflix
All products recommended by Engadget are selected by our editorial team, independent of our parent company. Some of our stories include affiliate links. If you buy something through one of these links, we may earn an affiliate commission.