A student's guide to keeping track of your finances

Being good with money takes practice.

For many students, their first year at college is the first time they'll be entirely responsible for their personal finances. Such independence can be stressful, but it doesn't need to be as long as you're savvy, organized and disciplined. And there are plenty of apps and services that can help you stick to a budget when you're worried about cash.

It doesn't matter if you're starting high school or graduating college; right now is the ideal time to develop good money habits. If you can live by a few rules, you'll be able to survive, regardless of what happens in your future. The first rule is the simplest: Your income needs to add up to more than your spending.

Dire emergencies aside, you shouldn't be getting into debt for any reason if you're not earning a regular (and decent) salary. Credit cards offer the temptation of a spending spree, with the pain deferred for months (or even years) afterward, but don't you dare. That new purchase may seem exciting now, but you'll come to resent it when you're paying 20 percent interest on it.

Third, set yourself a budget and do not, for any reason other than a serious emergency, break those rules. And no, Coachella tickets, illicit substances or a Seamless order to your dorm do not count as emergencies. With any purchase, channel Marie Kondo and ask if you need it or if you could do without or find a cheaper alternative. 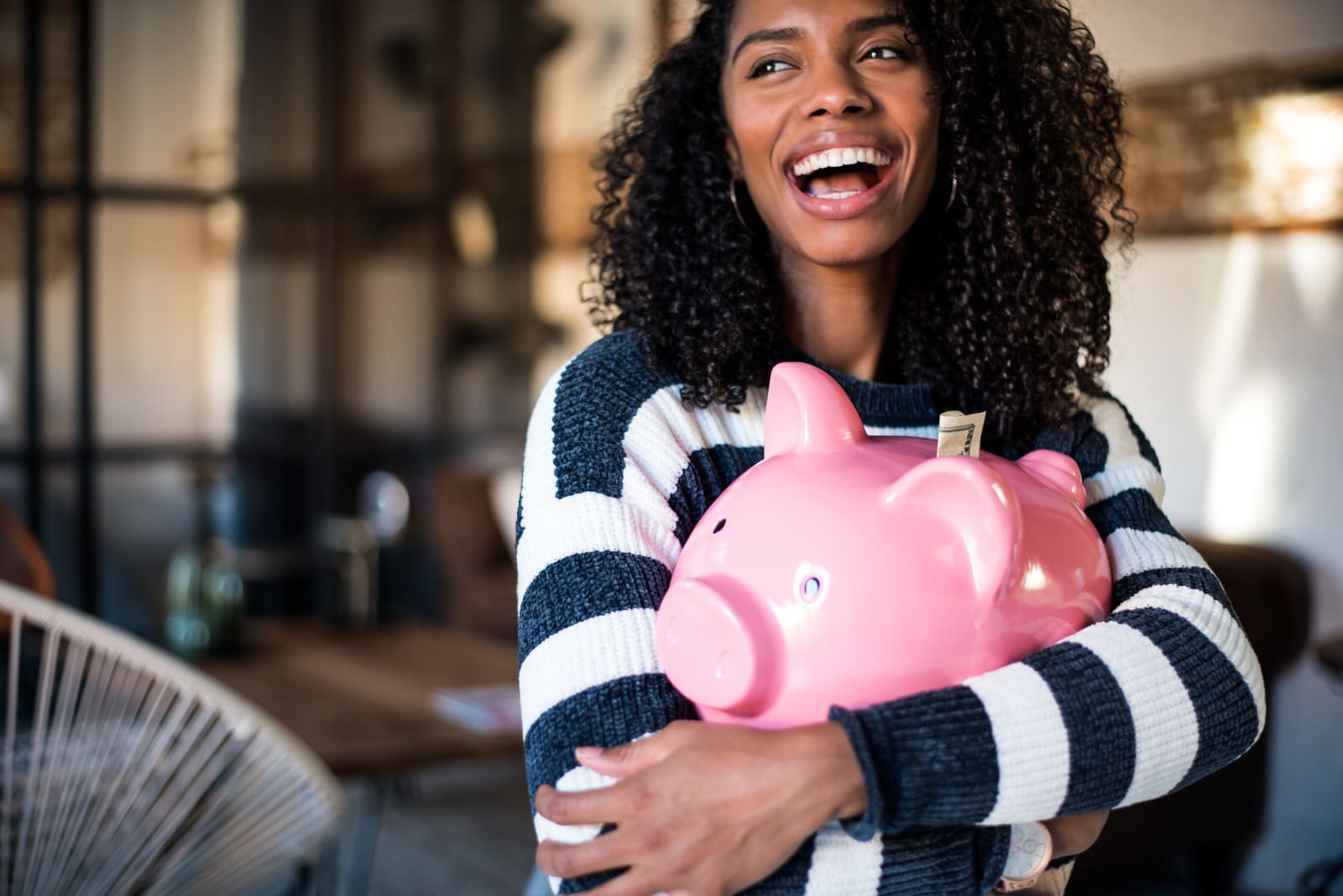 Setting a budget can be hard, because it requires you to be mindful about how much you're regularly spending, and on what. The end result, however, is that you'll be able to understand where your cash goes and if you're making the best use of it. Use your budget as a way of learning where your weak points are, and set rules to combat that in the future.

The first thing to do is to work out how much cash you'll expect to have on hand for the year and what your fixed costs are. These are the things you'll pay on a regular basis, either week by week or month by month, for the duration of your education. You know what a fixed cost is, because you know that bad things happen if you stop paying it.

Then, you'll want to make a list of your costs that, while not fixed, you'll be expected to pay on the regular. Food and drink, transport, not to mention fun, are all things you should keep in mind when building a budget. Plan how much you'd expect to spend in a good week and turn it into a fixed target, giving you a clear set of rules.

If you're struggling with this, remember that your spending must be less than your income. So if there's an imbalance, you'll need to find ways to cut your spending by eating less lavishly or taking cheaper forms of transport. And don't forget that you also need to account for emergencies and regular savings, so budget those in.

One more thing: You know those articles in which crusty rich people talk about how darn kids are spending too much money on store-bought coffee? It's world-class bull, because the dollars spent on drinking a $3 latte every day for a year wouldn't cover your loans, a car or down payment on a house. You need to include room in your budget for fun. Otherwise what's the point of living? Set a figure that you can afford, and spend it on whatever brings you joy.

OUR FAVORITE WAYS TO BUDGET

The cheapest thing you can do, of course, is plug your finances into a spreadsheet and do the rest manually. Spend half an hour in Google Sheets or Excel and you'll be able to knock out a half-decent budget that'll last years. I should know: The same spreadsheet I used as a student is still working well a decade later.

Obviously, it's far more work than some of the apps and services below, but there's something rewarding about doing it yourself. And if you're struggling to build your own, here's a sample Google spreadsheet you can experiment with yourself, when you've copied it to your own drive.

You Need a Budget 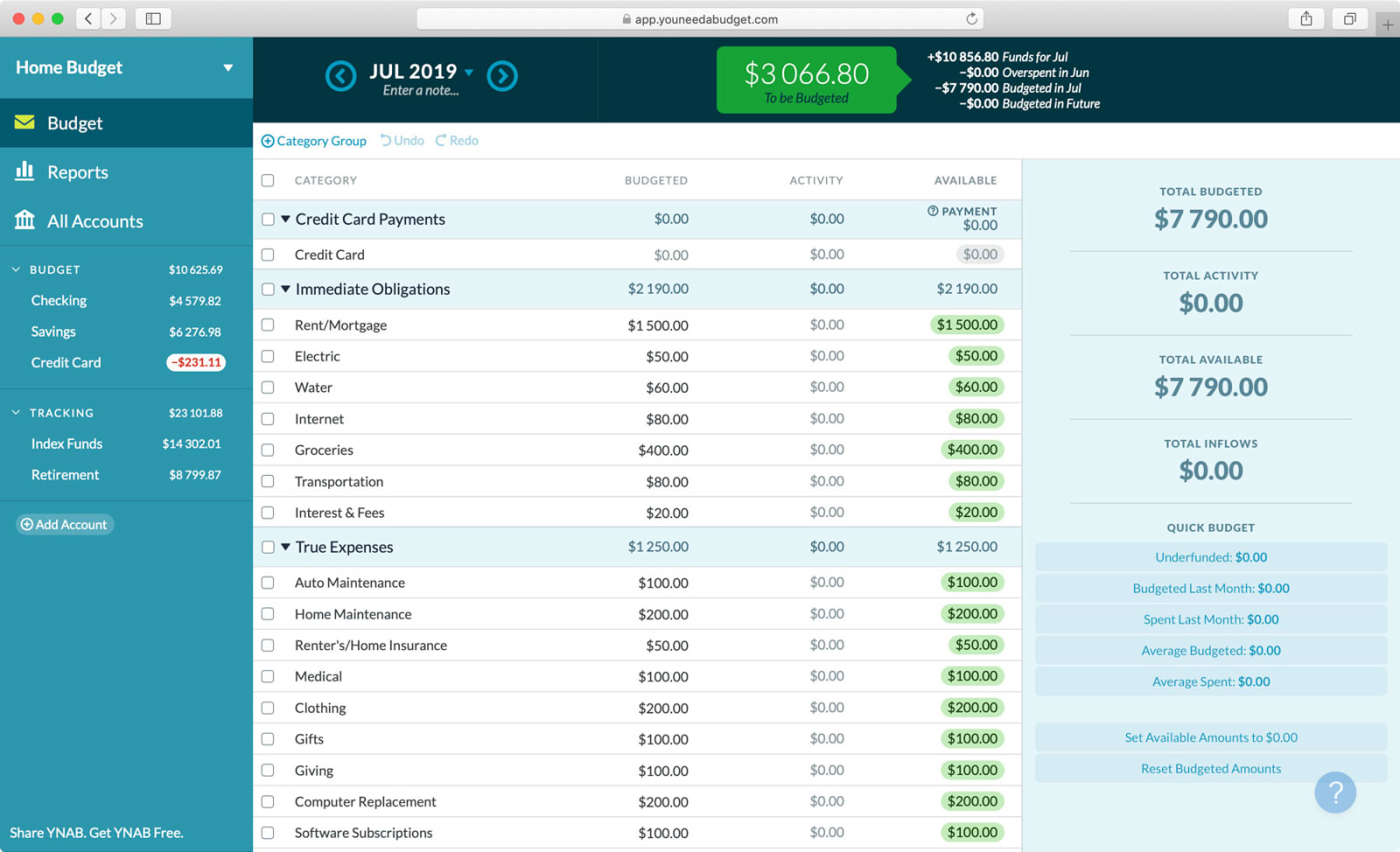 Pricing: $6.99 per month after an initial 34-day free trial, although the figure is taken as a $83.99 lump sum. Students, if they can prove they are a student, get a full year of free service before having to pay. The company says that if you aren't satisfied with the app or your service you can get a full refund, "no questions asked."

You Need a Budget (YNAB) is one of the most popular money-management apps, and it's available for Windows, Mac, iOS and Android. It's based on Jesse Mecham's budgeting system, which gets you working your way out of debt through a combination of smart management and saving. Mecham's methods are, at first blush, unorthodox, but its users are often enthusiastic to the point of being evangelical.

That includes planning for expenses based on the cash in your bank rather than what you expect to have at the end of the month. And YNAB tasks you with "aging" your money, keeping the cash in your bank until it is more than 30 days old before spending it. If you can do that, it's likely your earnings are covering your spending and then some.

The platform offers goal tracking, education and a litany of workshops laid on every week to help people grapple with their budgets. 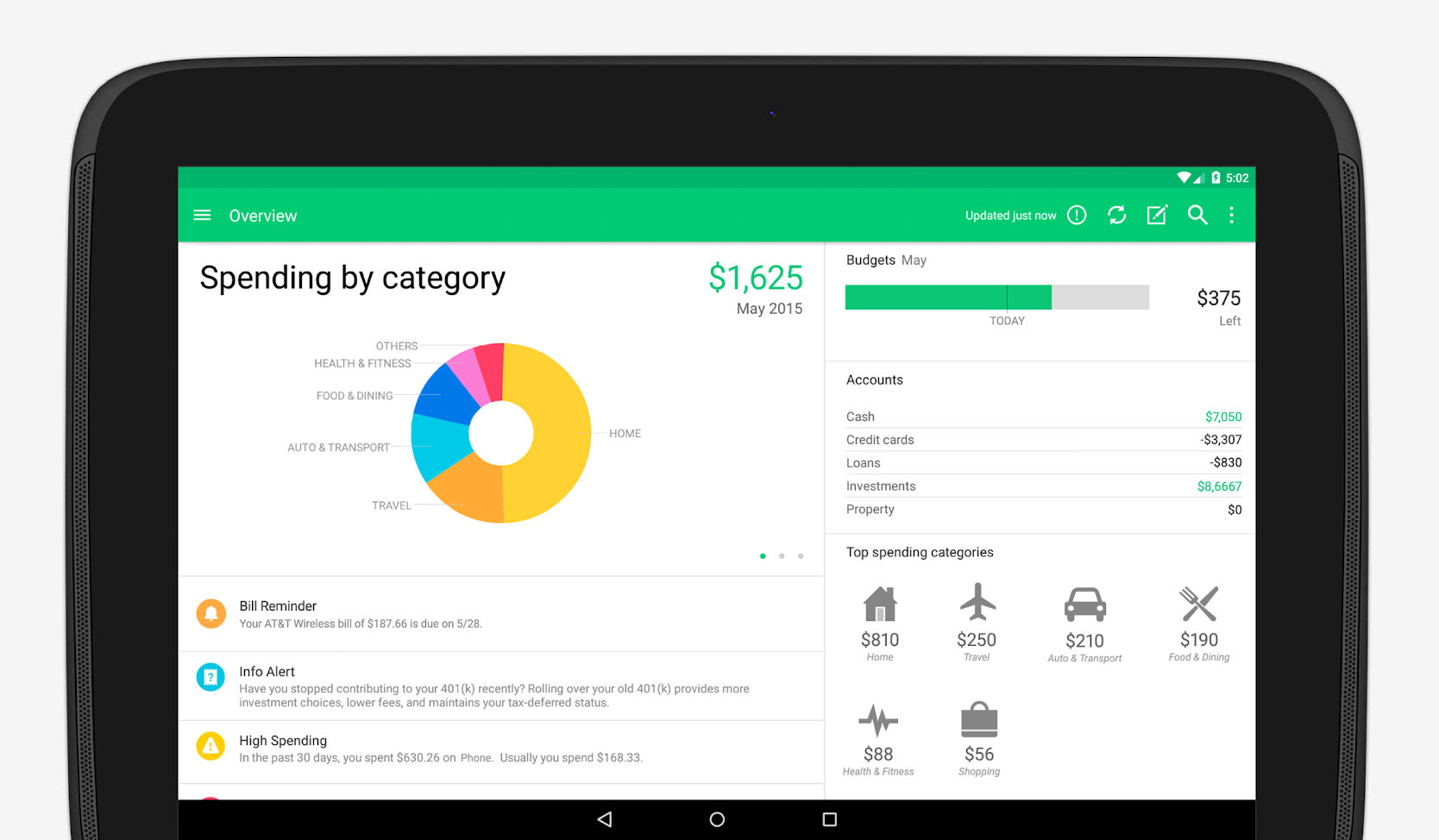 Pricing: Mint is "free" because, like Facebook, you are the product that Mint can sell ads to, and the platform gets a commission from every financial product it sells you. A premium, but not ad-free, version, called Mint Credit Monitor, costs $17 per month, offering credit-score tracking and identify theft protection.

Mint is the budgeting website owned and operated by Intuit, the accounting-software giant that also owns TurboTax. The service can pull together your various bank and credit card accounts and track your spending and saving through a single page. You'll be able to develop your own budget and crucially, get reminders when it's time to pay your bills.

Mint may not have as much focus on clearing your debt as YNAB, but it does have one killer feature: It's owned by Intuit. That means come tax season (assuming your parents don't claim you for the credits), you can import your 1099 documents from Mint straight into TurboTax. 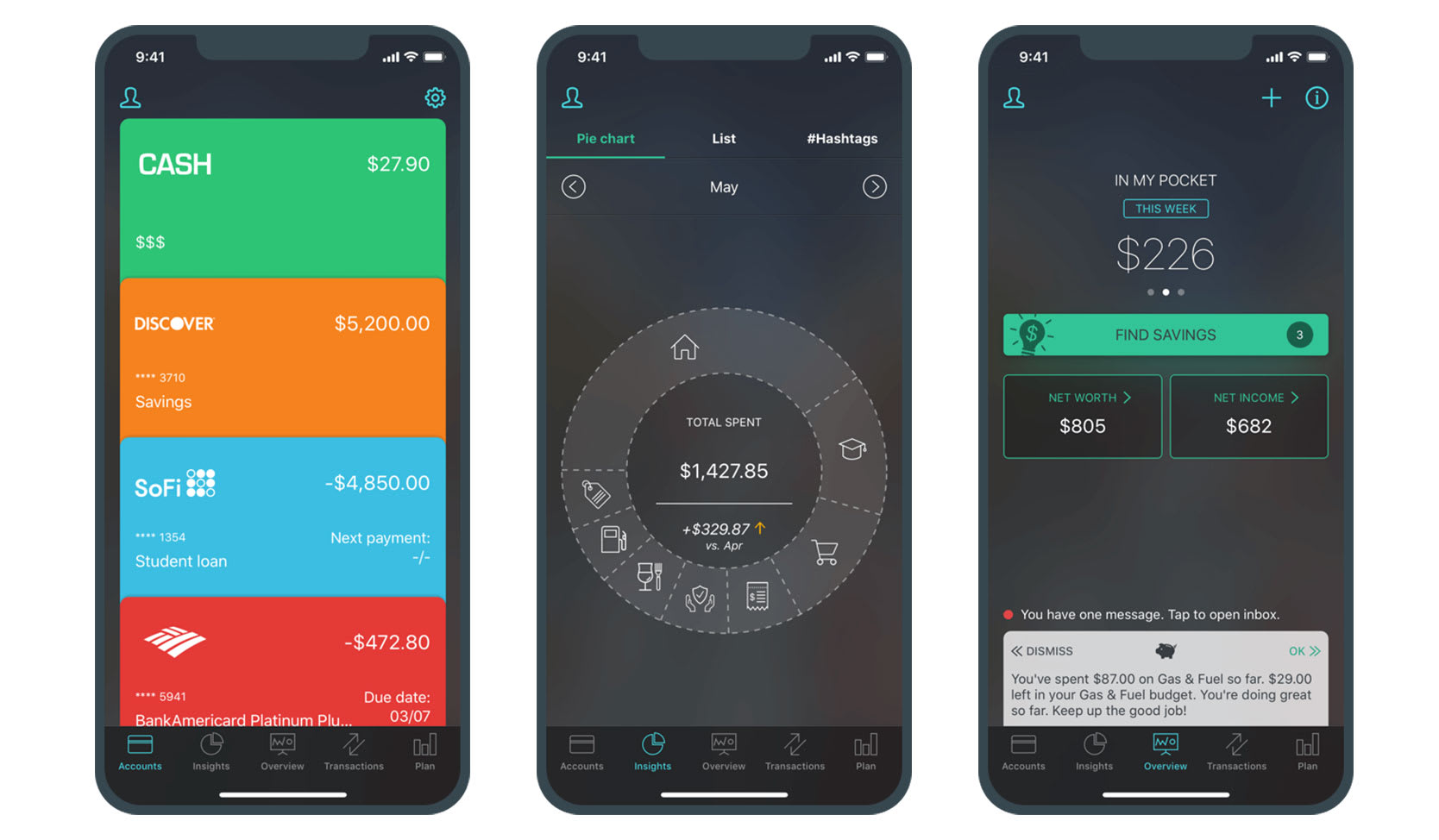 Pricing: PocketGuard itself is free, but there are limits on what you can track (and you can't add in cash transactions at all). The unlocked product, PocketGuard Plus, costs $4 per month, or $20 annually.

PocketGuard's selling point isn't that it aims to totally shift your financial habits but that it acts as an angel on your shoulder during the month. Once you've imported your accounts and categorized your spending, you can start adding things like spending limits. These are, unsurprisingly, ways in which you can limit yourself -- like only allocating $30 per month to entertainment and so forth. And PocketGuard is designed to look for cheaper alternatives to the financial products you already have. 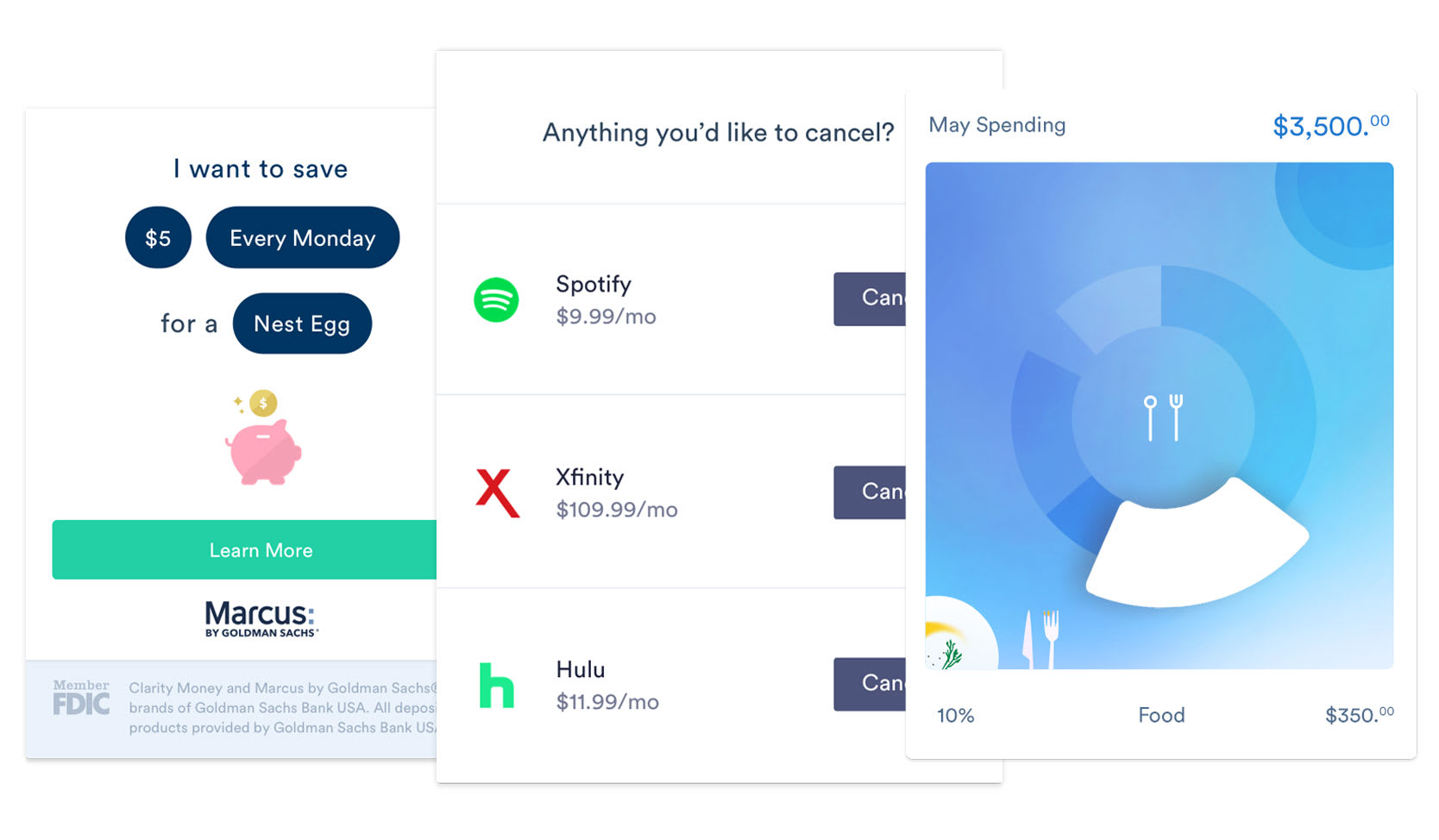 Pricing: Clarity Money is free, and the company has said it will remain so even now that it's owned by Goldman Sachs. Over time, it's likely that Clarity will be integrated further into Marcus, Goldman's new online bank (of which it is now a part).

The idea behind Clarity is to put all of your banking into a single place so that you can organize your funds more easily. What separates Clarity from other apps is that it promises to help you save money by finding subscriptions you may have forgotten about, and it helps you cancel them. Even better, however, is the pledge to negotiate bills you've already incurred to try to get a better deal.