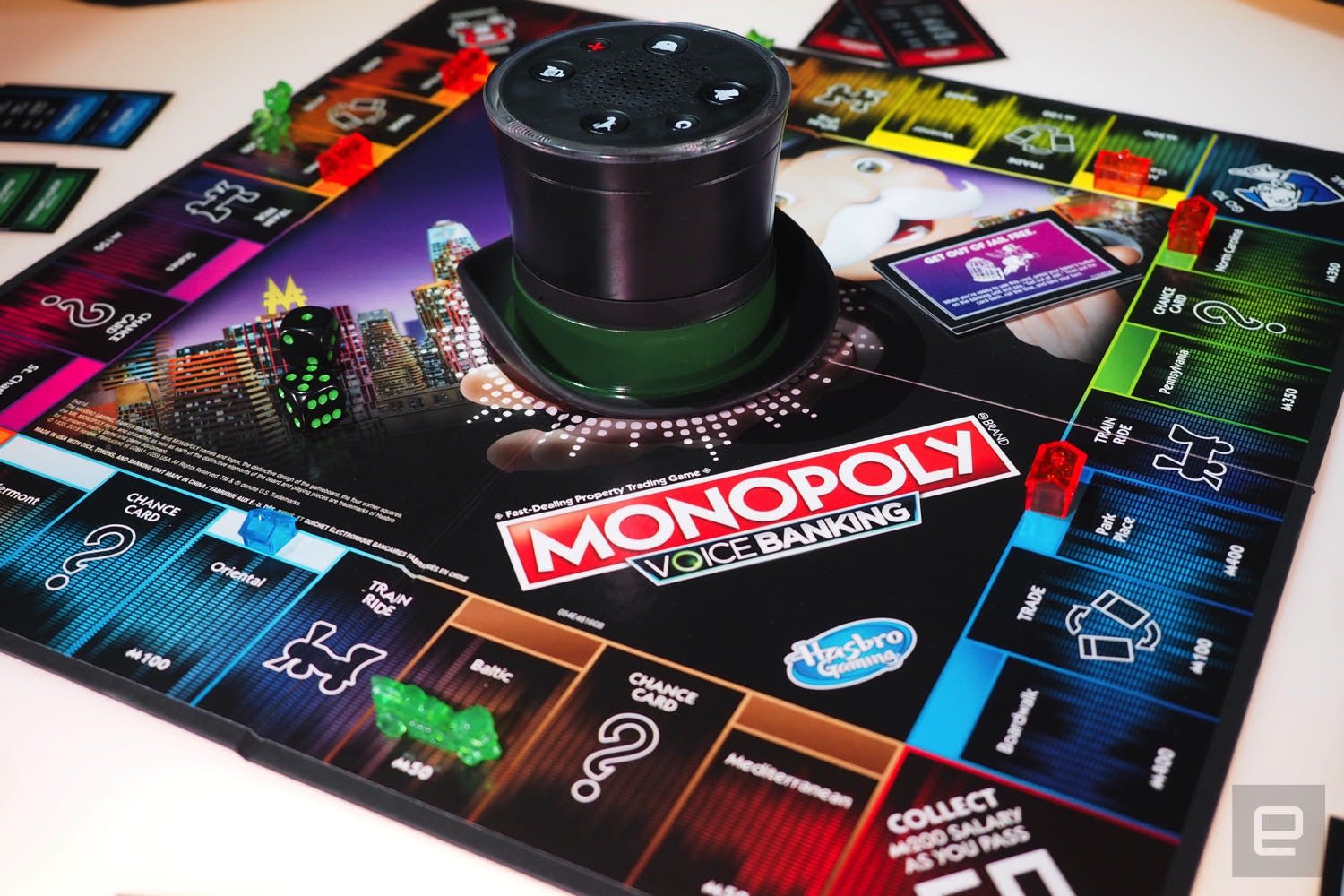 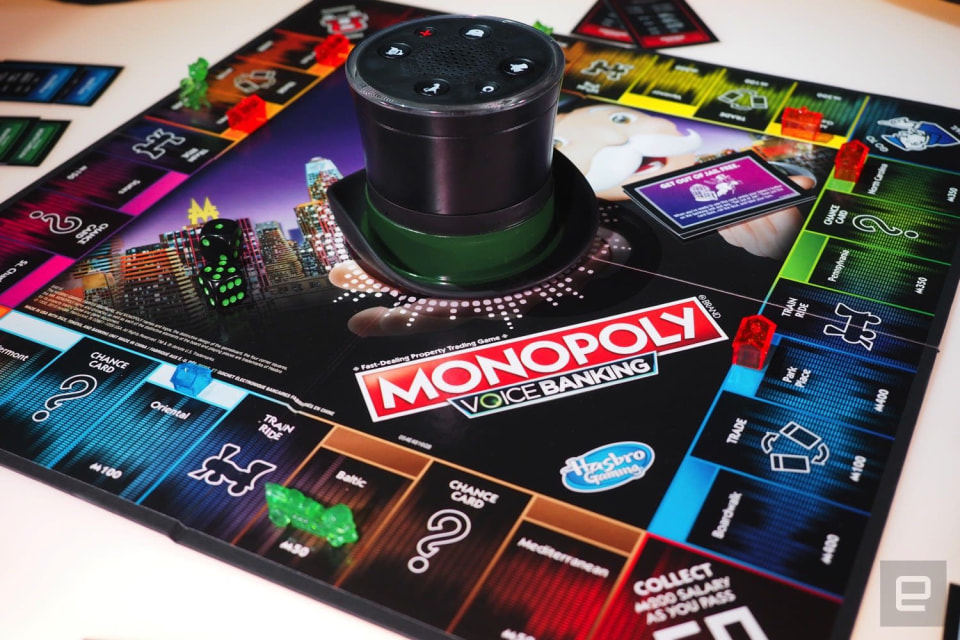 Monopoly is one of the best-known board games... and one of the most reviled. Games take forever to finish and can end in tears or fisticuffs. But that hasn't stopped Hasbro from churning out version after version, with themes ranging from Mario Kart to broke millennials. The latest variant, Monopoly Voice Banking, would seem to be another gimmick capitalizing on the recent uptick in smart home devices. But it actually removes a lot of the pain points, boiling down Monopoly into the parts that are actually fun. 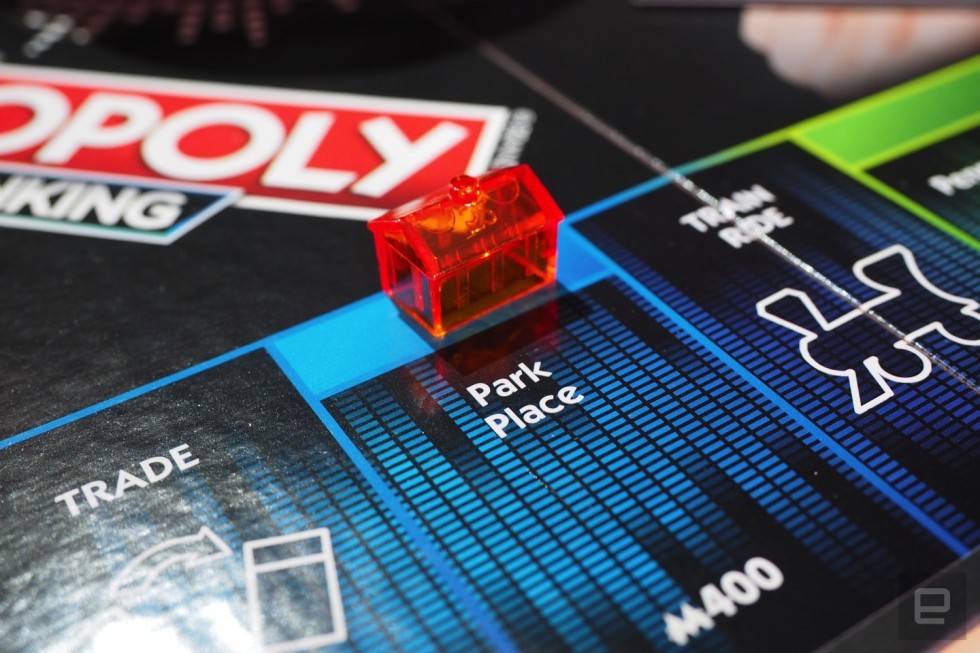 When you open the box, the game's inspiration is immediately obvious: The voice control unit (aka Mr. Monopoly, aka Rich Uncle Pennybags) looks like a second-generation Echo Dot, a stout black cylinder with a light-up ring around its edge and a series of buttons on top. There's a brim you can snap on to turn it into a replica of Mr. Monopoly's hat. It's cute but also necessary: You'll need it to lift the speaker a bit so you can actually hear the voice coming from the grill positioned on the bottom. The instructions say to play in a quiet room, but my friends and I had the air conditioner on and did fine. However, I wouldn't push it by trying this thing at a loud party.

Privacy lovers need not worry, as it will only listen for a command when one of the buttons is pushed. And it's not connected to the internet, so you can't hack it into a regular smart speaker or even download updates. It's fairly basic in its function. 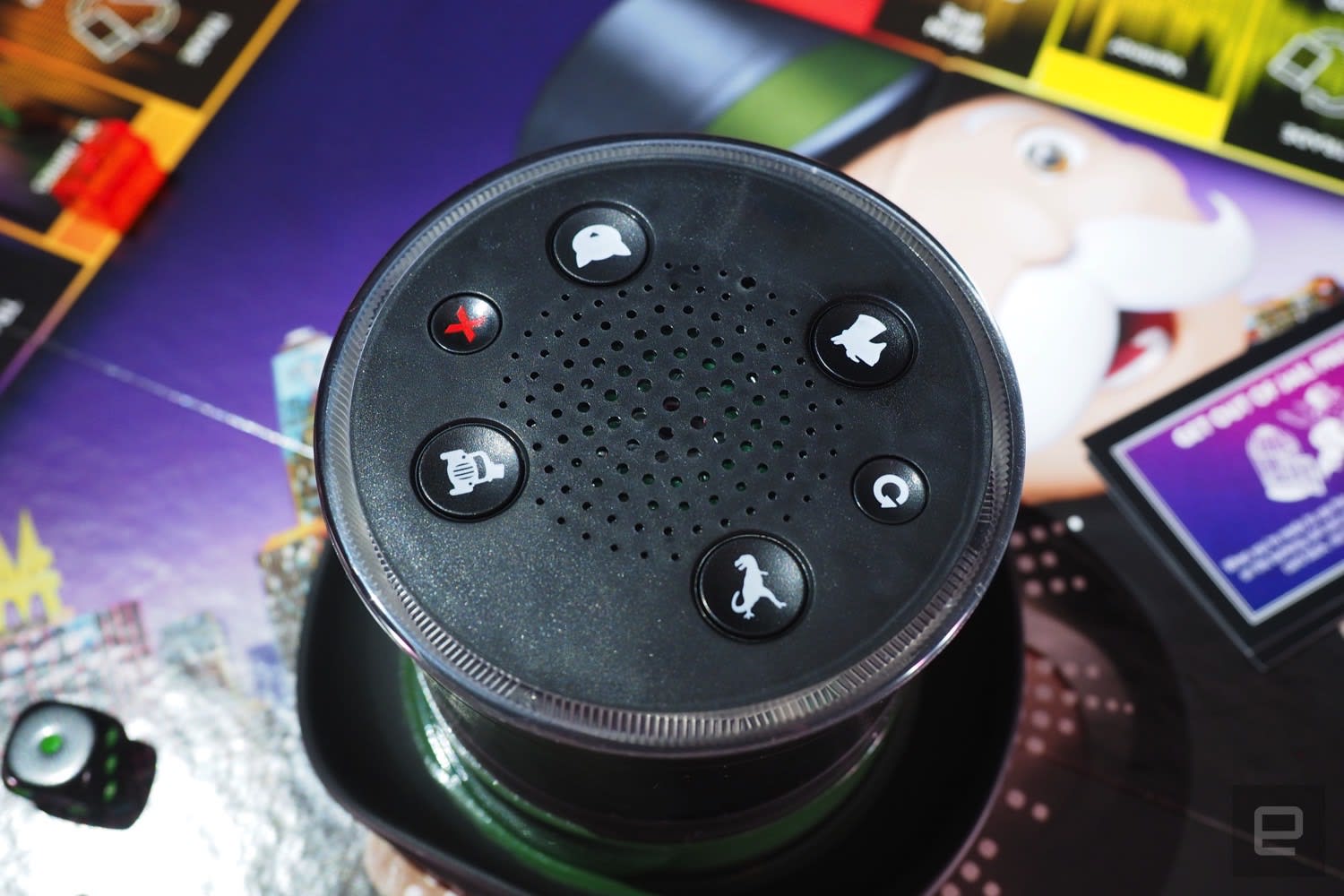 Because it's fairly basic, the game has been heavily stripped down to accommodate the voice control and its limited number of functions. There can only be four players: the dog, the dinosaur, the car and the cat. Each color set only has two properties instead of three, and the names have been shortened. (Bid farewell to Connecticut, Tennessee and Virginia Avenues and hello to phrases like "buy Oriental," which elicited giggles from an Asian player in our group.)

The railroad lines have been replaced with "train ride," where Mr. Monopoly sends you to a random property on the board. Community Chest has been eliminated, and instead of drawing a card on Chance, the voice control will randomly reward or punish you when prompted. The utilities have been removed in favor of what I found to be the most intriguing rule change: forced trades. Pay 100 Monopoly bucks and you can swap one of your properties for someone else's of your choice. 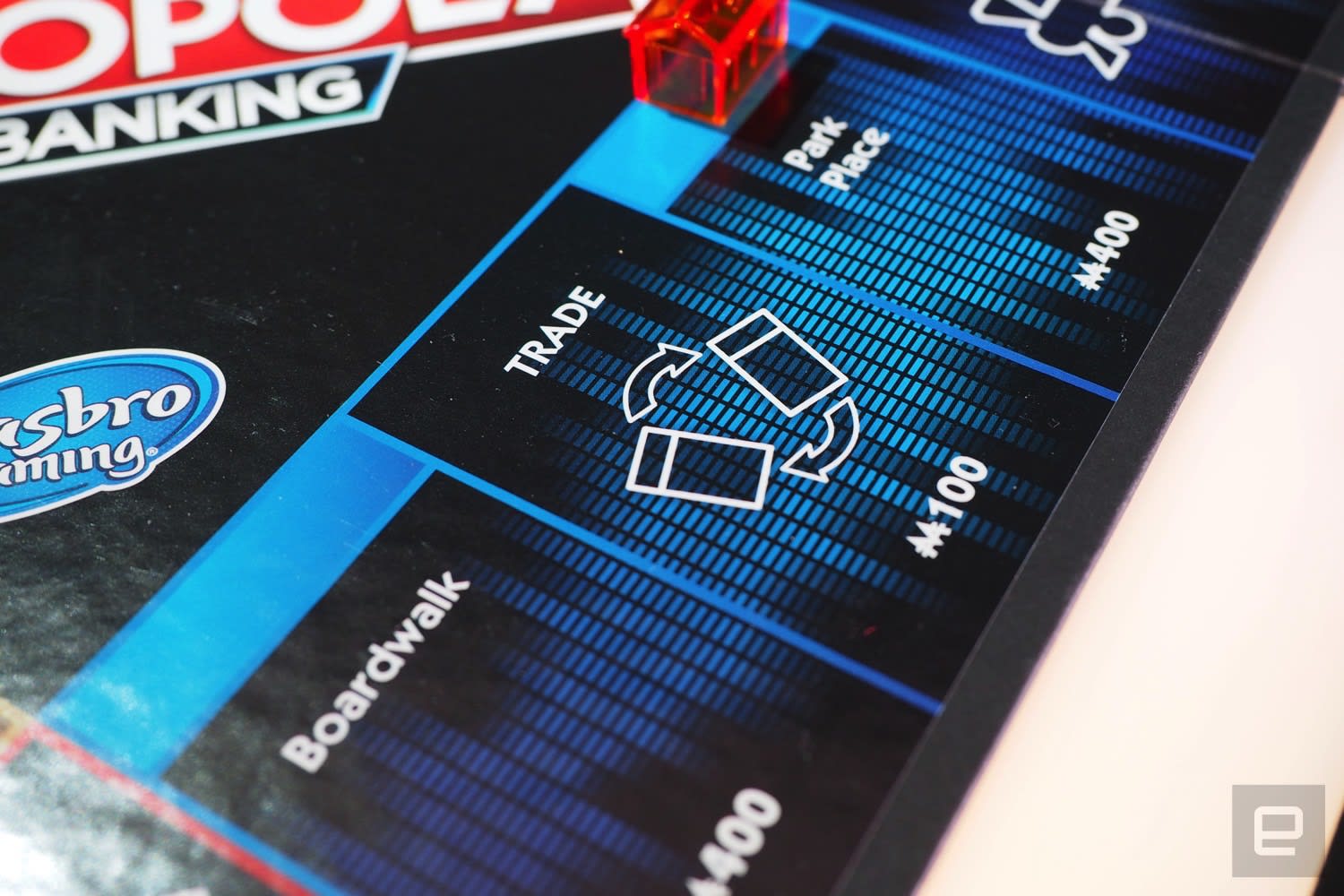 Mr. Monopoly will keep track of everyone's cash and what properties they own, but everything else is manual. You still roll two six-sided die to determine your move. The game has no idea where you are on the board for the most part, so you have to tell it to "pass go" to collect your $200. (I suppose this is the only way you can cheat in the game, if everyone else left the room or didn't keep track of whether you'd claimed your payday, as there's no limit on how often you can use this command.)

Each player has a reference card with the voice commands written on it, which is good because some of them can be finicky. To issue a command, you push the button with your token's picture on it and say what you want, according to the wording on the card. "Buy [property name]" works fine, but you need to say the whole thing with "pay rent on" -- otherwise Mr. Monopoly is likely to send you on a train ride instead. "Build house on [property name]" can also be hit or miss. Sometimes it's a pronunciation thing, but occasionally Mr. Monopoly glitches and seems to forget which properties you own. 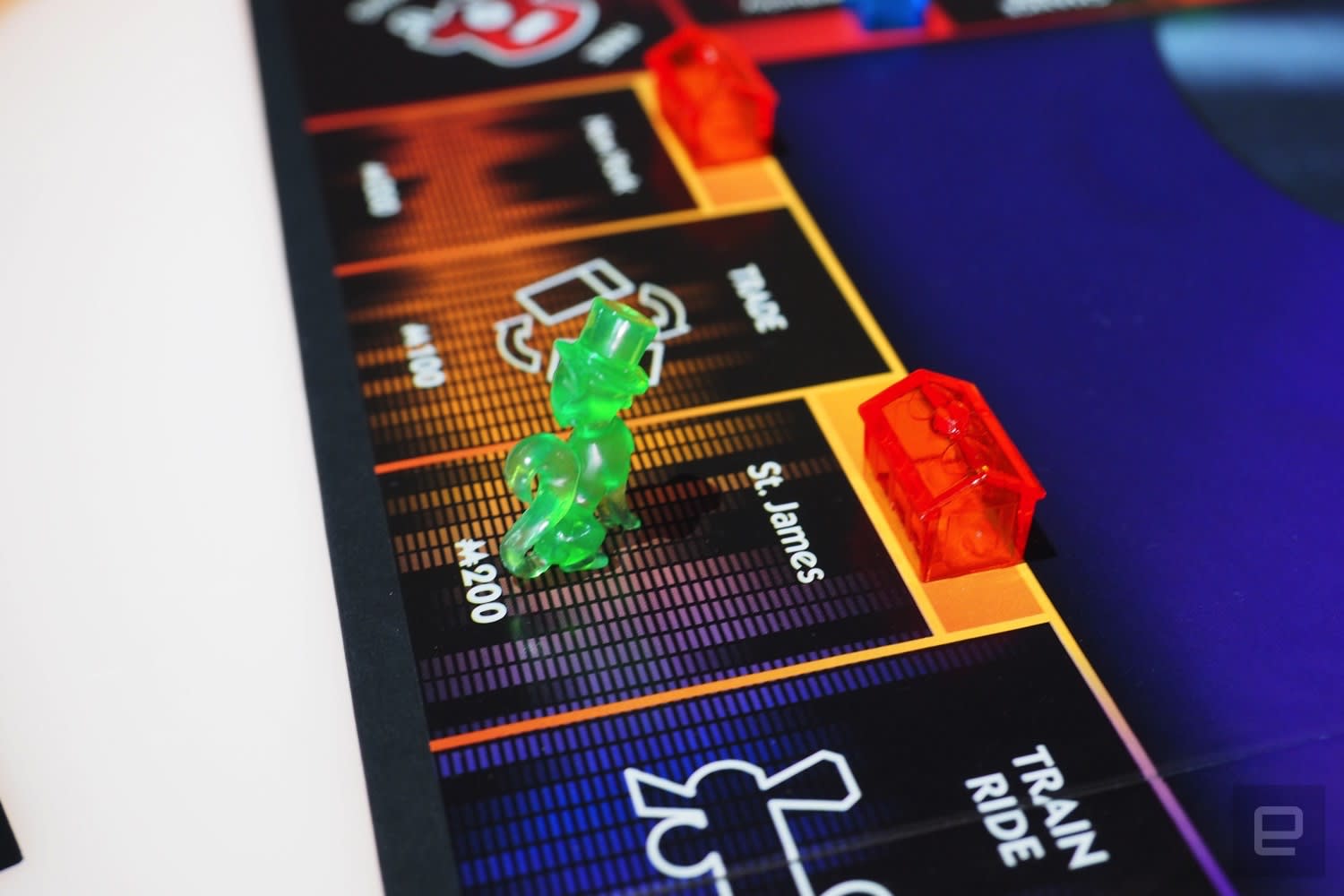 Oh, housing is another place where the game was simplified, as you don't even need to build single houses first: You can go straight to constructing a hotel. Mr. Monopoly will simply charge you the combined cost of a house and the hotel to do so. You can only build one house per property; the game doesn't even include that many houses in the box. Mr. Monopoly does, however, know how many houses and hotels there are supposed to be, so you better not lose any pieces.

A rule that is often skipped in regular Monopoly is the auction process, wherein if a player lands on an unowned property and chooses not to buy it, the property is then auctioned off to all the players. I suppose you could also skip it in Voice Control Monopoly, but why would you? Here it's the most fun part of the entire game. My friends had a ball mashing buttons to bid faster than Mr. Monopoly could say the current price; he's no motormouth.

(Also, he really, really doesn't like the word "Ventnor." How many possible ways could you say this one? "Vent-NOR. VENT-nor. Veeeeentnoooooor. VENTNOR! Ventnor." They should have kept Atlantic Avenue.) 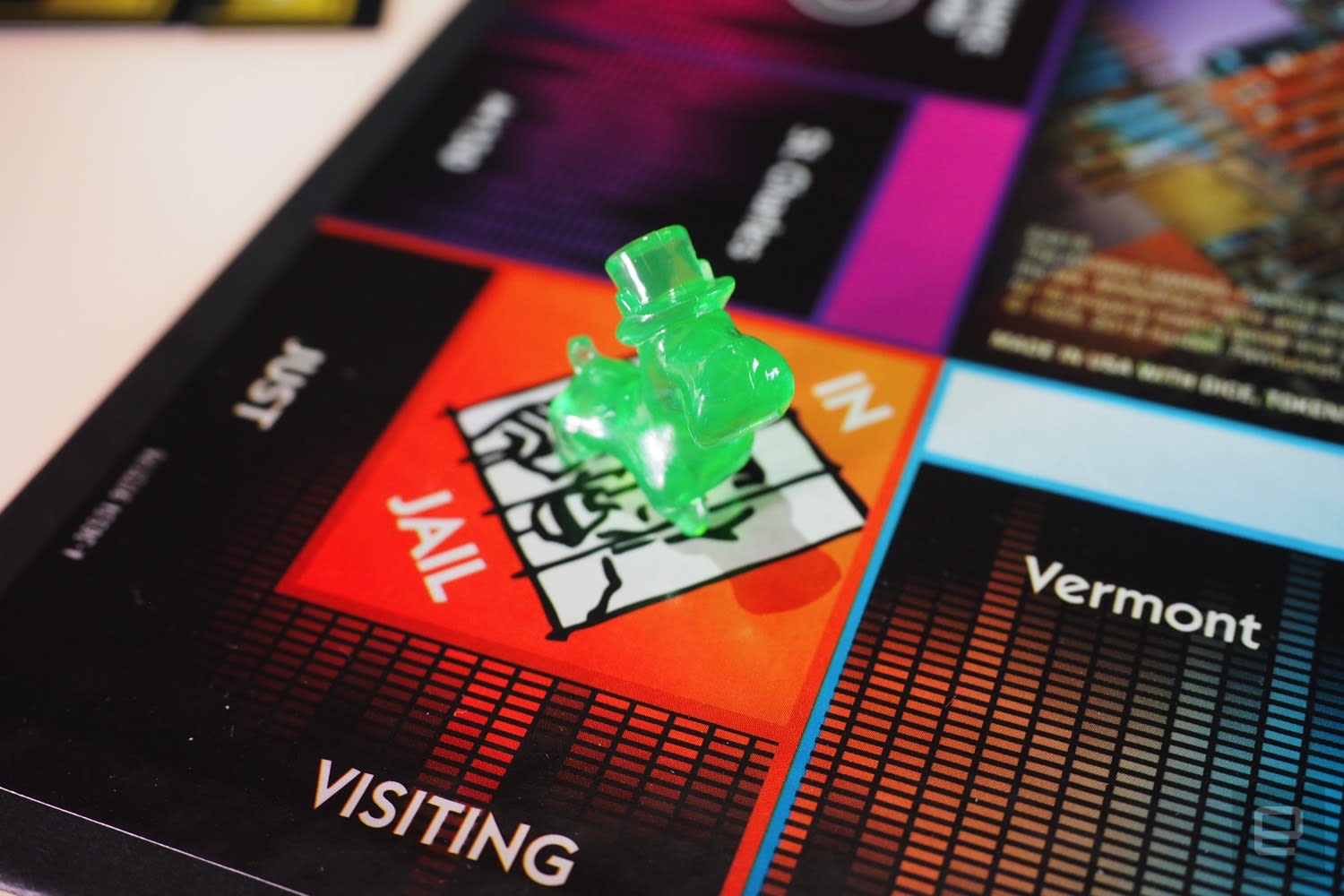 The game ends with the first bankruptcy. Mr. Monopoly then totals everyone's cash balances and properties and announces the rankings. That's all well and good, except when the winning player asked Mr. Monopoly to repeat the rankings and it listed a different winner. We eventually figured out the top two players had tied, so Mr. Monopoly was choosing one of them at random when listing the standings. It's not a game breaker, but it certainly outlined the crudeness of Mr. Monopoly's programming. The card says you can ask him questions and he might answer, but outside of "who's winning?" we haven't found one that works yet.

Monopoly Voice Banking goes on sale today for $30, which honestly, is a pretty good price for a gimmick version of the game, especially when regular sets retail for $20 or less. It does all the bookkeeping and makes auctions a lot more fun, which means the only screaming you'll hopefully be doing is at the speaker and not your loved ones.

In this article: av, board game, board games, echo dot, gadgetry, gadgets, gaming, hands-on, hasbro, monopoly, monopoly voice banking
All products recommended by Engadget are selected by our editorial team, independent of our parent company. Some of our stories include affiliate links. If you buy something through one of these links, we may earn an affiliate commission.