If your dog takes off while wearing a Whistle, it should be a lot easier to get her back.

I'm happy to say that I've never come close to losing Ellie, my beloved nine-year-old chocolate Labrador. But that doesn't mean I haven't occasionally had a moment of panic thinking about how truly terrible that would be. For years, the default protection against such a scenario has been "microchipping" — implanting a tiny ID chip under a pet's skin that can be scanned to reveal contact information for the animal's owner. While this is still a smart thing to do, it's only useful after your pet has gotten away and has been rescued by someone who tries to reunite the animal with its person. There's a lot that can go wrong before that happens, if it ever does.

Whistle has been working to offer a better solution for several years now. What originally started out as a "Fitbit for dogs" evolved into a GPS-enabled pet tracker that alerts you when your pet left a designated "safe" zone and lets you see where it is on a map. Last week, the company released its latest trackers, the Whistle Go and Go Explore, which features real-time location tracking, improved battery life and a few other tweaks to the Whistle formula.

Ellie and I have been testing the $129.95 Go Explore for almost a month, and while it's not without quirks, it's still a potentially important safety net for any dog. On a day-to-day basis, its activity-tracking features aren't particularly necessary, which made it easy for me to think of it as an unnecessary gadget. On the other hand, if Ellie ran off, I'd be very glad she was wearing it. 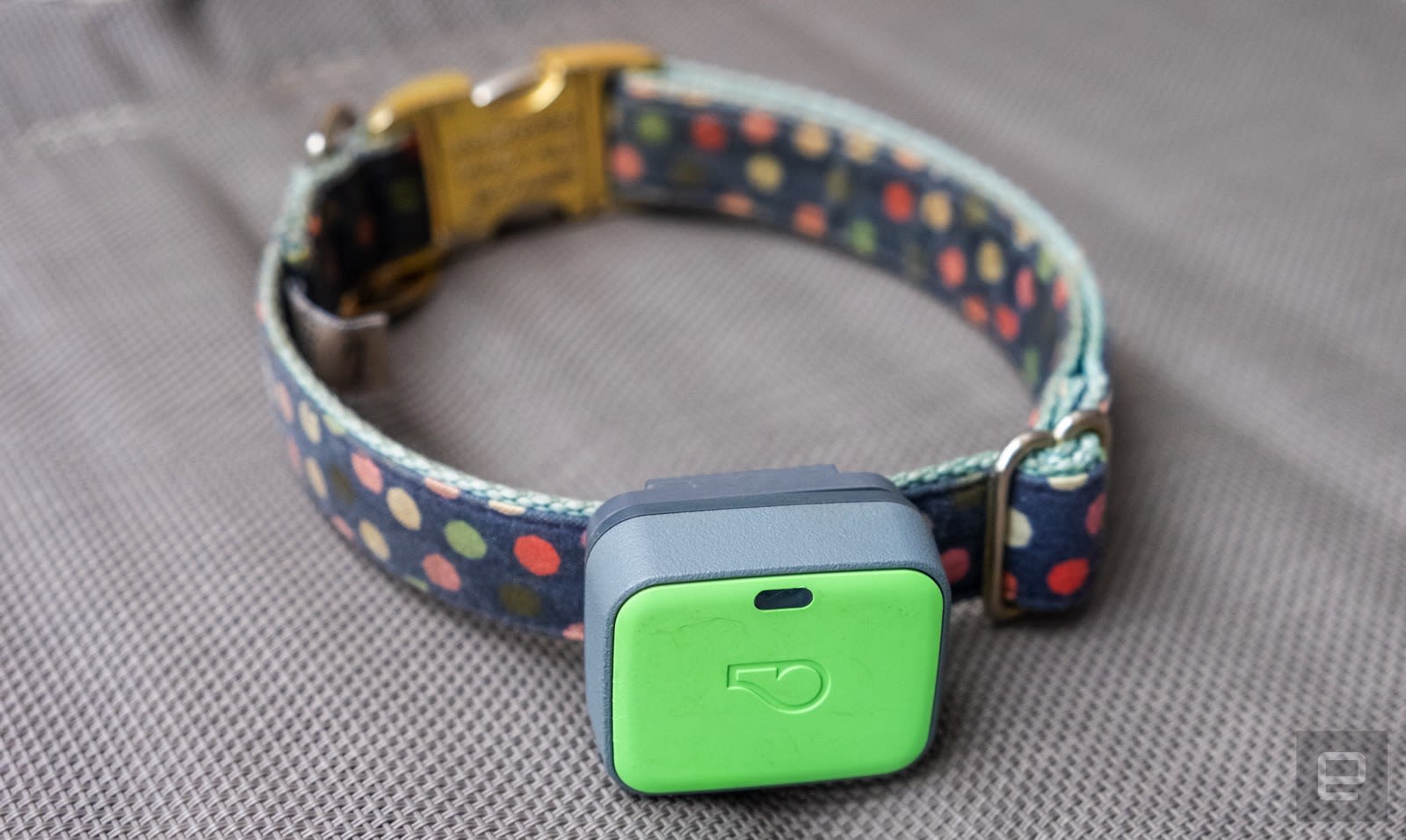 The new Whistle models look essentially the same as the previous generation — they're chunky rectangles that securely attach to a dog's collar with an included clip. It's sized for standard one-inch collars, but Whistle has other sizes you can order if you need a bigger or smaller option. Once it snaps in place, it's difficult to remove, as it should be. Provided the collar isn't too thick, it should stay put even through active running and playtime. The Whistle itself can then be attached to this clip; you can unlock and remove it for charging, but it's still secure once set in place.

There isn't much else to say about the hardware itself, which is fine. It's a little thicker than I'd like, but given the impressive battery life and connectivity options, I can overlook it. It doesn't seem to bother Ellie either, which is the most important thing here. 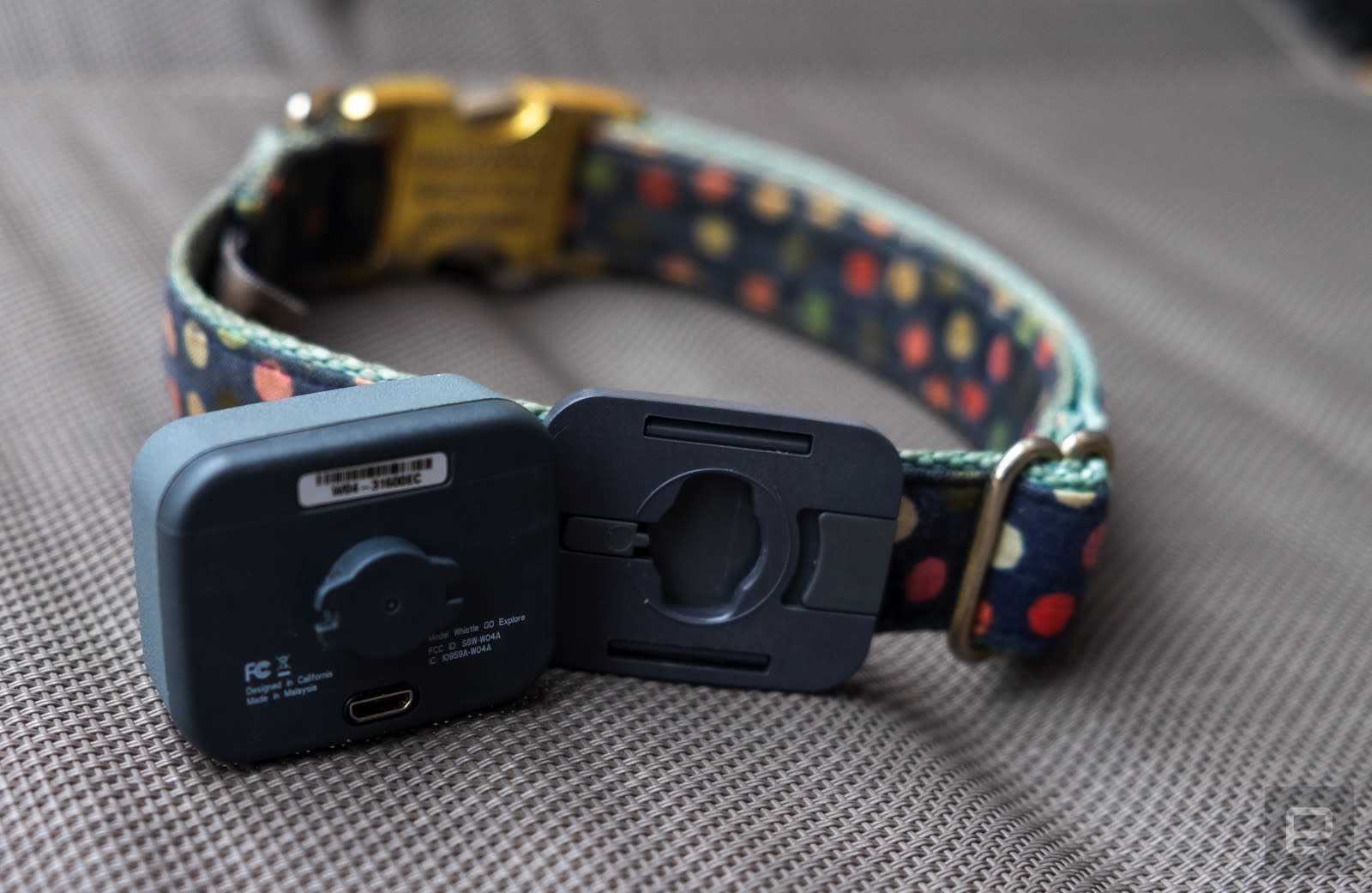 The Go Explore model I tested also has a light, which serves a few purposes: It turns on when the Whistle is connected to your phone and transmitting data, and you can also remotely enable it to make your pet more visible for night-time walks or make her easier to find if she's lost.

Naturally, you set everything up through Whistle's smartphone app. Here, you'll enter your pet's vital info like age, breed, weight and so forth. Whistle uses this data as part of how it tracks your pet's activity, which I'll get into more later. You're also prompted to connect the device to your home's WiFi network; Whistle uses this to help confirm your dog is where it belongs. Beyond just the WiFi network you also trace out a section on a map that indicates your pet's "home zone"; if the Whistle is disconnected from WiFi but still inside this zone, you won't get an alert. This doesn't ever happen to me, since I live in a city, but if you have a large backyard for your dog to roam in, it'll keep you from getting false alerts about your pet being on the loose.

Finally, you'll have to sign up for a subscription. Yes, another subscription. In this case, you're paying for the Whistle to access AT&T's network for real-time tracking. This is how the Whistle can ping your smartphone and transmit GPS data if your pet gets away, so it's basically an essential feature. But we're all suffering a bit from subscription fatigue right now, so adding yet another is a tall ask. It's $9.95 a month, though you can get it for less if you pre-pay for a year or two up front. 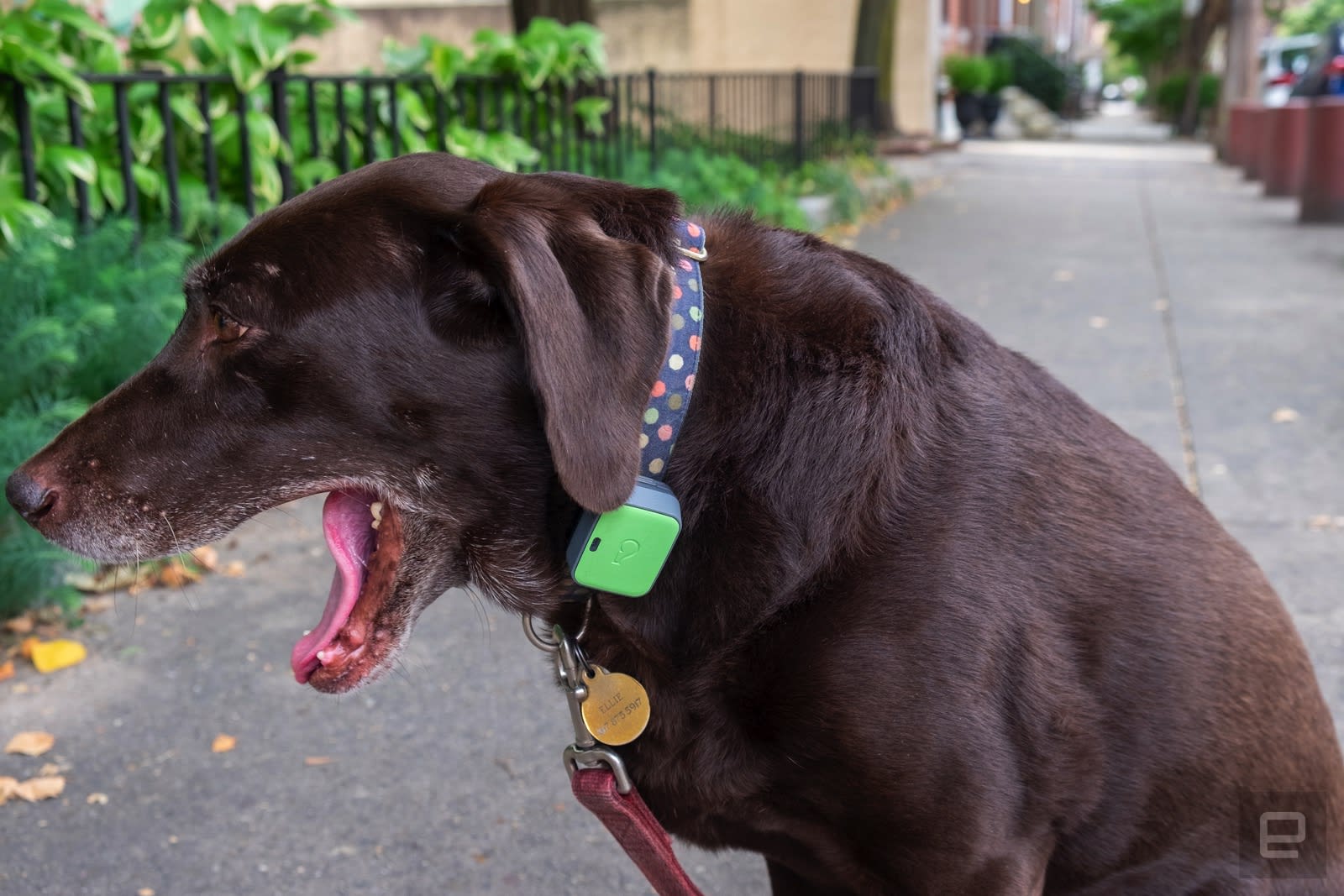 Once I set everything up, the app gave Ellie a daily goal for "active minutes." Whistle says it generates this goal based on your dog's age, breed and weight; it also takes into account data from Whistle's database of pets who have similar characteristics to assign a goal. Ellie got credit toward that daily goal when we went on walks, as well as for any more vigorous activity (like tearing around the house before dinner). The app also estimates how far she traveled, how many calories she burned and how long she was resting.

I found these metrics semi-reliable. The main issue I ran into was that the Whistle seemed to overestimate how far she walked in a given day. That's because distance estimates are based primarily on the three-axis accelerometer; using the GPS constantly for tracking distance would run down the battery far too quickly. So instead it combines accelerometer data with the GPS tracking from when you're out on a walk to pull together these estimates. By default, the Whistle GPS tracks your dog's location every six minutes when not connected to WiFi; combining these points with the accelerometer data completes the estimate. In any case, my dog isn't training for a marathon, so I'm fine with trading off some imprecision in exchange for battery life.

Fortunately, I didn't need to activate the lost pet mode for real, but I did some testing to see how the Whistle works if your pet is gone. When walking my dog, I got an alert that Ellie was outside her home zone, with an approximate address. That address was usually accurate, but the alert took longer to arrive on my phone than I would have expected; we had gone a full block before the Whistle recognized she was out of the home zone.

Once that alert came through, I checked the app to see where Ellie was located when it was sent and enabled the always-on tracking to see exactly where she was. Helpfully, it also shows where you are on the app so you can figure out how to quickly get to your pet. As I mentioned earlier, the Whistle only checks in and updates location every six minutes by default to save battery life, so you're going to want to hit that always-on switch if your pet is really lost.

The main downside with the six-minute interval, aside from taking a bit longer than I'd like to send crucial alerts, is that it makes for pretty wonky walk-tracking data. After you take a walk, the Whistle app shows your route as part of the daily activity view, but that map was rather incomplete — it only shows the points where the Whistle "checked in" and puts lines between them, which results in a route that often didn't match reality.

Overall, Whistle engineered the Go Explore to use the GPS and cell radios sparingly, saving the battery for emergency situations. The good news is that this lead to tremendous battery life overall. I've been using it for nearly a month and only just saw my first low-battery warning. But with 22 percent left, I could easily use it for several more days.

Of course, your mileage will vary. Ellie's on the older side now, so she's not quite as active as a younger pup would be. She gets out of the house for two long walks a day and one or two short ones, so the majority of the time the Whistle was connected to my WiFi network, putting it in power-save mode. A few weeks into my testing, I also changed the GPS refresh rate to every three minutes, rather than every six, so I'd get more accurate tracking on our walks. Even with that change, the battery stayed solid.

Battery life is the main differentiator between the $130 Go Explore and the $100 Explore (the other is the Go Explore's light). Whistle claims 20 days for the former and 10 for the latter. Based on how long I got, though, I'd imagine that anyone with a lower-energy dog could buy the standard Explore and get longer than 10 days from it. 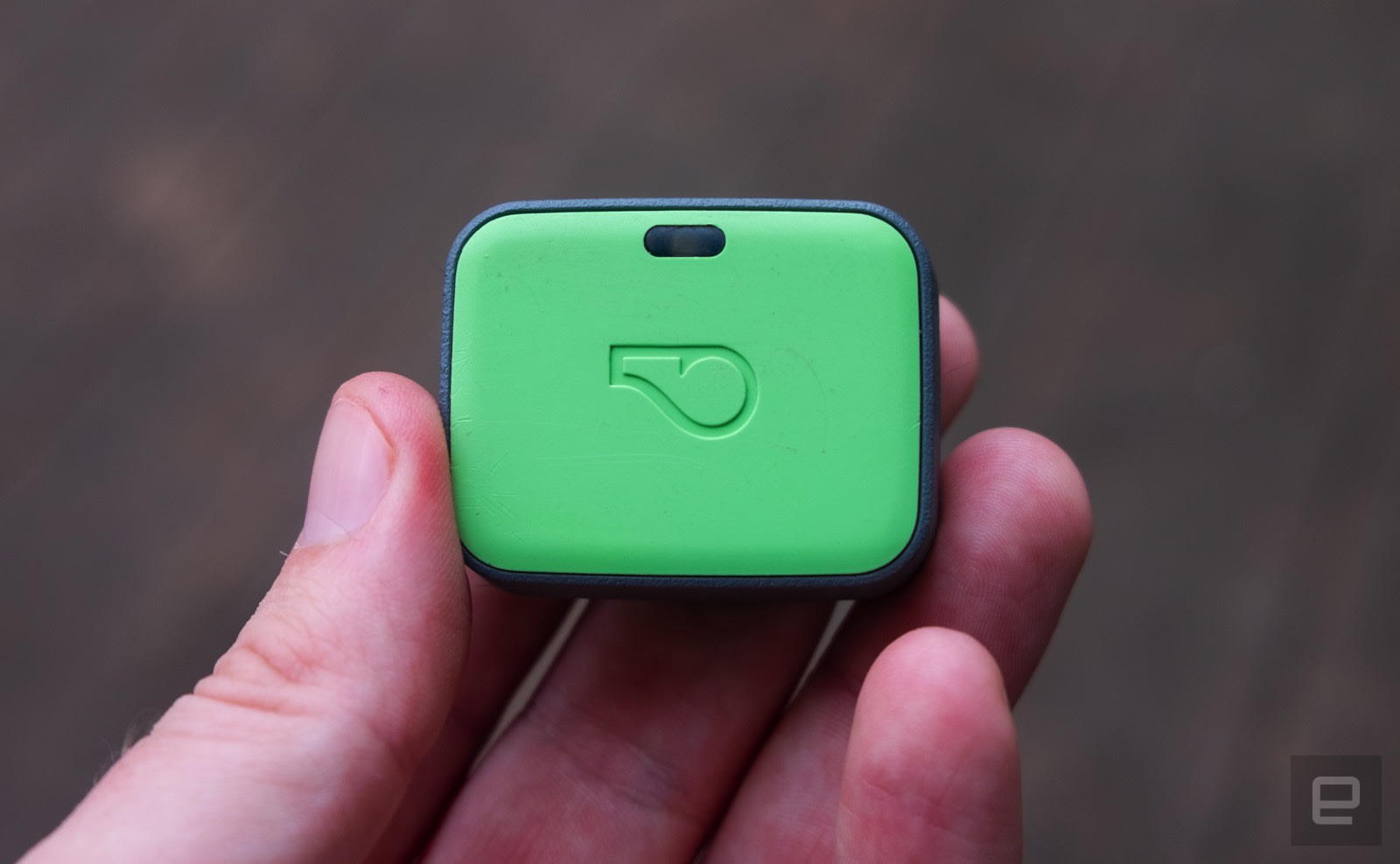 Should you buy either, though? Think of it like insurance: It's not the most exciting thing to pay for, and hopefully you'll never really need to use it. But if you do, you'll be glad that you shelled out the money. The same goes for the Whistle. Thanks to the Go Explore's excellent battery life, I could pretty much just set it and forget it.

The activity tracking is a fun little bonus, as I'm a sucker for meeting these gamified movement goals, and there's some benefit to my pup if she's getting slightly longer walks than before. But its real value lies in what it can do if Ellie gets away from me on one of those walks. I'll probably never need it — and that reality makes paying a monthly subscription fee a tough pill to swallow. But if I ever track down my lost dog with it, money will be the last thing on my mind.