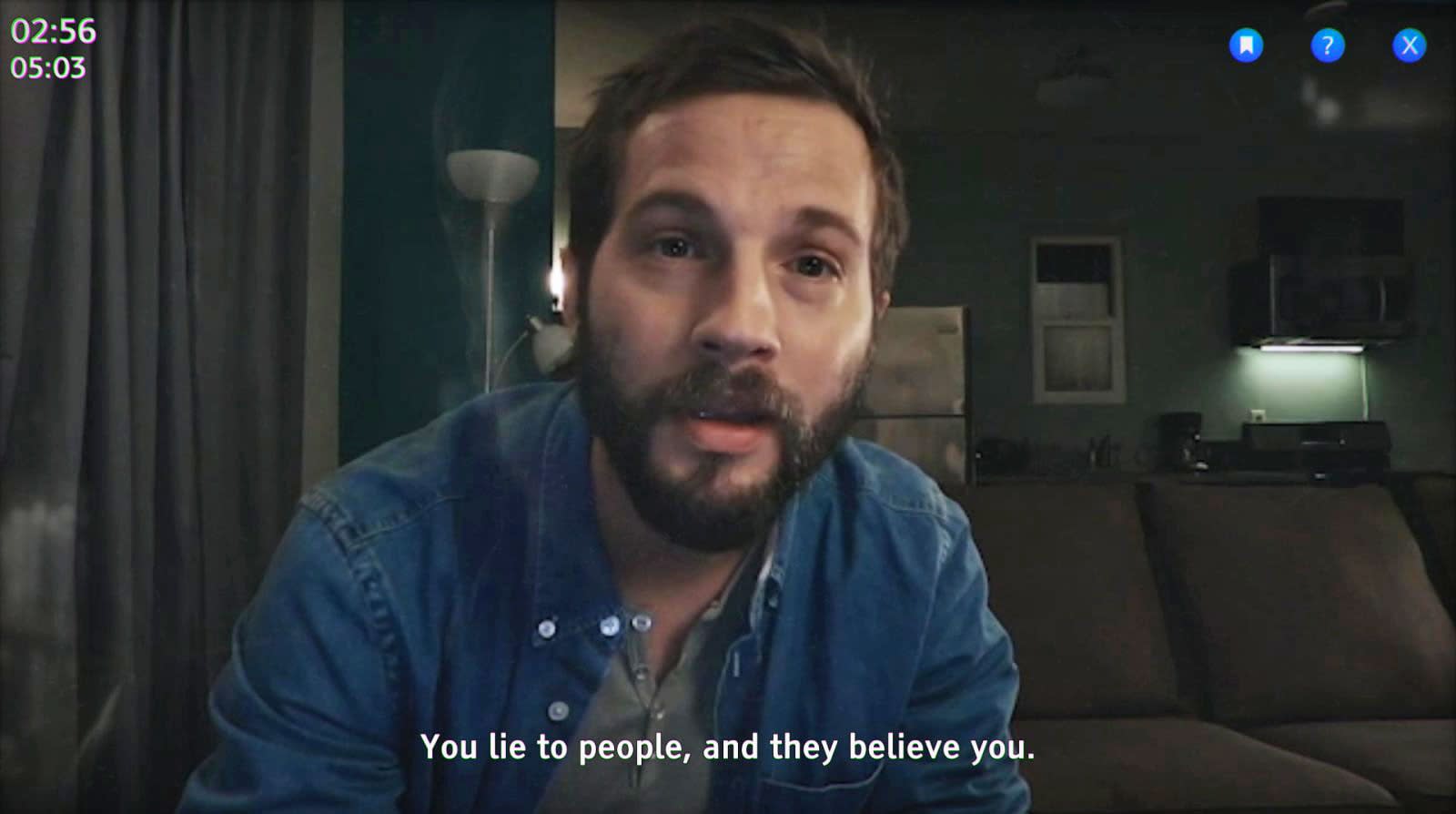 ‘Telling Lies’ is bigger, but not better, than 'Her Story'

How do you scale up a hit indie?

In Her Story, developer Sam Barlow did a rare thing: He created a new video game format.

Four years later, he's made Telling Lies, which releases on August 23rd. It's a game with almost identical gameplay -- centered simply on typing search terms into a video database -- but a lot more polish. It's the fat-budget feature film to Her Story's shoestring indie. Whereas the original was carried by one actor, its successor has four main performers, nearly 100 cast members and dozens of speaking roles.

Telling Lies' mechanics are still engrossing. But for those who've played Her Story, the new game poses the question of how to follow up a hit indie. How can you preserve your unique concept while testing how far it stretches? How does scale change the precious thing you made?

This article does not divulge major plot points for Telling Lies. But the game opens with hardly any introduction; part of its fun is piecing together everything starting with names, relationships and histories. Just by describing the game -- in which you advance essentially by learning new keywords -- I'll necessarily be revealing minor details you might want to unravel yourself.

The original gem in this case is Barlow's search-based gameplay. After the briefest of FMV intros to Telling Lies, your screen shows... a laptop screen. It's midnight on a Sunday. You have a hard disk with 10 hours of NSA-recorded video clips and a search bar to explore them.

The word "LOVE" is already typed in, so you may as well hit search. Five clips appear. All of them involve people talking to each other by video, and all of them mention the word "love." You can watch any of them, scrubbing forward and backward.

The rub is that you only see and hear one side of the video conversation at a time and have to find the other half yourself. So if a character starts playing with his beard and talking about the tooth fairy, you can search "beard" or "teeth" and see if a corresponding clip appears. From the response "I'm not gonna tell you," you could perhaps infer that the question was "where are you?"

It focuses your attention on dialogue. It gamifies being a good listener.

Or maybe that search will reveal another clip entirely. Every video raises fresh questions -- why is the main character apart from his kid? What's his relationship with this other woman? -- and every revelation you uncover registers as a small personal win.

This is one of the most groundbreaking aspects of the gameplay: how it focuses your attention on dialogue. It gamifies being a good listener.

In an RPG made by Bioware or Obsidian, you might have half a dozen dialogue options to progress from a given conversation. In Telling Lies, your options are as limitless as the number of words in the dictionary.

Even a well-written traditional RPG can cause your eyes to glaze over and impatiently skip ahead to the response options. Telling Lies forces you to listen, because any word could be a portal to the next level or an illuminating side quest.

And that's how you progress in the game: by discovering more and more specific keywords. (By the time I finished my first playthrough, I had 86 search terms scribbled down and had seen only about half the clips.) You're motivated not by winning or losing but by curiosity. There's an incredible freedom to explore within a tightly constrained search bar.

This system worked well for an investigation like Her Story, which centered on a 1990s murder. Every video clip was shot in an interrogation room with one actor. The fact that the setting hardly altered from scene to scene made the sleuthing player extra attentive to any little discrepancy. It rewarded methodically poring over the database.

In Telling Lies, you're dealing with a fire hose of names, organizations, environments and on-screen characters -- there is almost five times as much footage as in Her Story. Scenes flow freely from clandestine street recordings to moodily lit bedrooms. Moments of drama aren't just described before and after; you're there to witness violence and (very PG) phone sex. The game presents a modern world where absolutely everything is recorded.

At a demo of the game a few months ago, Barlow told me he wanted to disincentivize completionism in Telling Lies, that it should be like an open world game where you can follow your curiosity. Scrubbing back and forth through clips is designed to feel satisfying -- Barlow called it the game's "Mario jump" for how fundamental it is -- which encourages surfing through videos rather than meticulously analyzing their nuances. It's possible to watch entire clips on fast-forward while following subtitles if you want.

At the same time, because the rewind function is a slow crawl even at full speed, skipping each clip from your keyword back to the start is discouraged. What's more, you can now search new keywords from within subtitles. Cumulatively, these new dynamics leave you with fragments of clips in your head as you hop from scene to scene.

Some of the new game's mechanics are the equivalent of "fast travel," Barlow has said, so players don't get overwhelmed. The problem with fast travel is that you miss the scenery -- and the satisfaction in a game of active listening comes from attending to subtleties of the scenery.

Once you dampen that mechanic, Telling Lies can become a far simpler game: a process of matching half-conversations, plugging the right shape into the right slot. There's a lot of having to watch both sides of a chat. That means around half of your playing time is spent watching characters looking directly into the camera, silent and mildly concerned. Or skipping through it. In fact, it's a little comical that the NSA can't simply match two sides of the same conversation themselves. Or show more than five search results at a time. Or that every character seems to conduct all communication by video call -- not texting -- or that everyone's phone and laptop cameras are a bit too well-framed and lit (most scenes are shot with GoPro 7s). Their calls never drop or echo; the picture never lags.

Every game requires some suspension of disbelief, and similar issues can crop up in films that mimic online life like Searching -- but hyperrealism is the very conceit of a game whose interface is an actual computer desktop.

This may sound like nitpicking, but the unrealistic elements point to another of Telling Lies' tensions: how to depict everyday video chats that are realistic but not narratively boring. If every scene hits a major plot beat and every shot is too pristine, it doesn't feel authentic. Telling Lies is guilty of lapsing into character clichés of the smooth but tormented spy, naive activist and duplicitous sex worker; meanwhile one particularly unsubtle expository scene depicts a six-minute explanation of historical trauma acted out with children's toys over video chat. However, if the game were stacked with true-to-life insipid banter and scratchy connections, it'd risk being dull.

Her Story got around this conundrum. The police station video quality was consistent but never overproduced because it was set 20 years ago. The database's shortcomings were acceptable because the era's tech was primitive. The premise of every video -- an interrogation -- had a clear purpose.

The problem with fast travel is that you miss the scenery.

That brings us back to the need for the right size for the right concept. In entertainment, the idea is that bigger is generally better. And recently, in AAA single-player video games, that open world is best. But some scripts are meant to be feature films, some five-season TV arcs, some a smattering of web shorts; perhaps what you have to say should fit in a book, other times an article, often a Tweet.

Telling Lies is a clever piece of storytelling. But it goes bigger than its predecessor without going better. That's in part because its sprawl, and the type of gameplay it encourages, can conflict with what made Her Story feel fresh. Every game needs to give the player enough freedom and enough constraint. Barlow's careful constraint is one reason why his breakout title was so successful. Constraint may be underrated.