And for you bass freaks, Roku also made a new wireless subwoofer.
C. Velazco|09.04.19
@chrisvelazco

Generally, when I think of Roku, I think of those handy HDMI streaming boxes that turn dumb TVs into smart ones. And sometimes my mind will wander to Roku TVs, smart television sets built by companies like TCL and Sharp that run the company's Roku OS. The thing is, Roku wants to be more than just an outfit that throws Netflix onto your TV screen. As evidenced by the wireless speakers it released last year and its growing team of audio researchers and engineers, Roku also wants to be the company that makes your streaming media sound great. And that's where its new Smart Soundbar enters the picture.

The 32-inch, Dolby-compatible soundbar will go on sale later this year for $180, and it packs four 2.5-inch speakers along with the guts of a Roku Ultra — quad-core processor and all. Unlike last year's Smart Speakers the Soundbar is meant to drive your television by itself, and thanks to those borrowed components, it can handle streaming video playback at up to 4K resolution. In other words, the soundbar isn't meant to augment the Roku players you already own as much as replace them outright. The soundbar isn't alone, either. An additional $180 will also net you a wireless subwoofer that — appropriately enough — looks like a Roku Ultra that went through a late growth spurt. Aesthetics aside, it packs a single, downward-firing 10-inch woofer and its output peaks at 250W.

So, how do these things sound? Well, it's far from other-worldly, but the soundbar produces surprisingly rich audio with respectable bass. I'll admit that I showed up to my early morning meeting with Roku still partially asleep, but that didn't last long once the company's spokespeople turned up the volume — clips from Blade Runner 2049 shook me up with near-room-filling audio, and bass-heavy tracks pulled from a Spotify playlist felt appropriately punch and aggressive. That's especially true when you have the sub wirelessly connected to the soundbar. During my demo, the sub was placed on the ground and well to the right of the television, but still pumped out resonant lows without going overboard.

Since the soundbar uses the same chipset and internals as the Roku Ultra, there's more processing power here than one might expect, and the company's clever audio software puts it to good use. I'm the sort of person who usually has to watch TV with the subtitles on, and not just because my hearing is sort of terrible. I don't want to wake up my upstairs neighbors (and their kids) just because I need to turn the volume up to hear conversations that tend to get lost in the mix. Enter Night mode, which attempts to level out your content's aural peaks and valleys so loud scenes aren't overbearing and quiet ones get a notable boost. And more importantly for people like me, a Speech Clarity mode does an admirable job of honing in on dialogue and making it louder without making everything else louder at the same time. 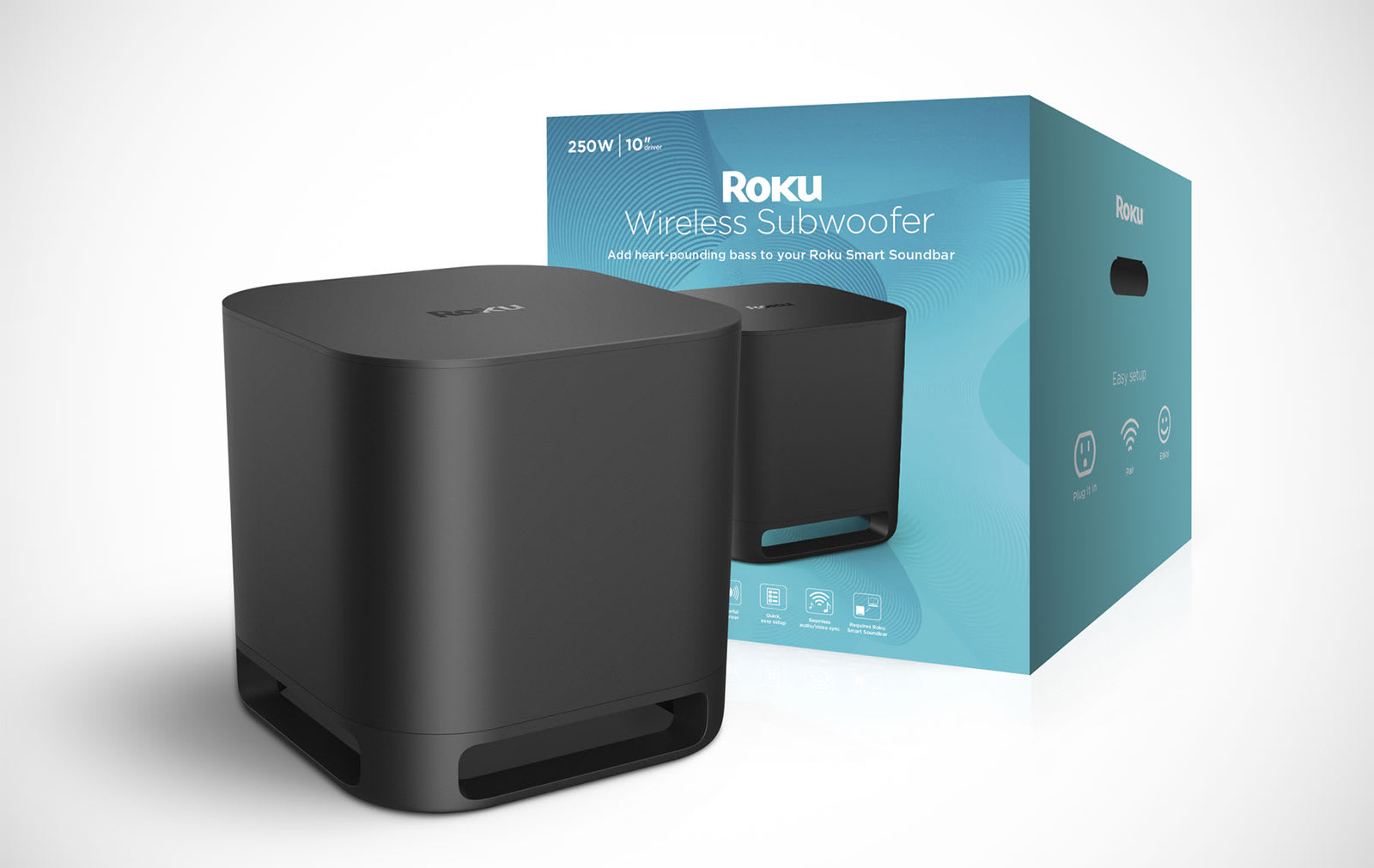 This is all well and good, but it sort of belies an important point. Yes, Roku's soundbar and sub sound good, but they're also dead-simple to set up — just connect the soundbar to a television with an HDMI cable and you're basically all set. Once plugged in, the sub automatically connects to the soundbar, at which point the soundbar starts figuring out how best to divvy up audio responsibilities. It's dead-simple, as you'd probably expect from Roku hardware.

All told, the Smart Soundbar and subwoofer seem like great options for people looking to spice up their older, non-smart home theater setups on the cheap. Yes, are there less expensive options out there, including packages that include decent wireless subwoofers. What Roku really has going for it here is the cohesiveness of it all — by shelling out $180 or $360, you'll have everything you need to bring a beloved older setup into the streaming age.

That said, the Soundbar seems far more useful to anyone who is only now stepping into the realm of smart television. To get the most out of it, you're locked into using Roku's software and interface running on the soundbar, even if your television already runs Samsung's Tizen, LG's webOS or Amazon's Fire TV software. Granted, the Roku experience is about as user-friendly as they get, but that's still a learning curve to keep in mind if you're coming from an existing smart TV platform.

Things could get a little dicier if you're already an avid Roku user. Since the Soundbar contains all the hardware and software needed to stream The Good Place to your television, it'll largely replace any Roku devices you might already have connected. The company says that the Soundbar is smart enough that you could pick up either of your Roku remotes to control the Soundbar's video output. Still, little tweaks you've made to on your original Roku, like how you've laid out your channel icons, won't carry over to the Soundbar. Fortunately, if you're using an actual Roku TV — that is, a TV running the Roku OS — you can control everything you need to from the interface you're used to.