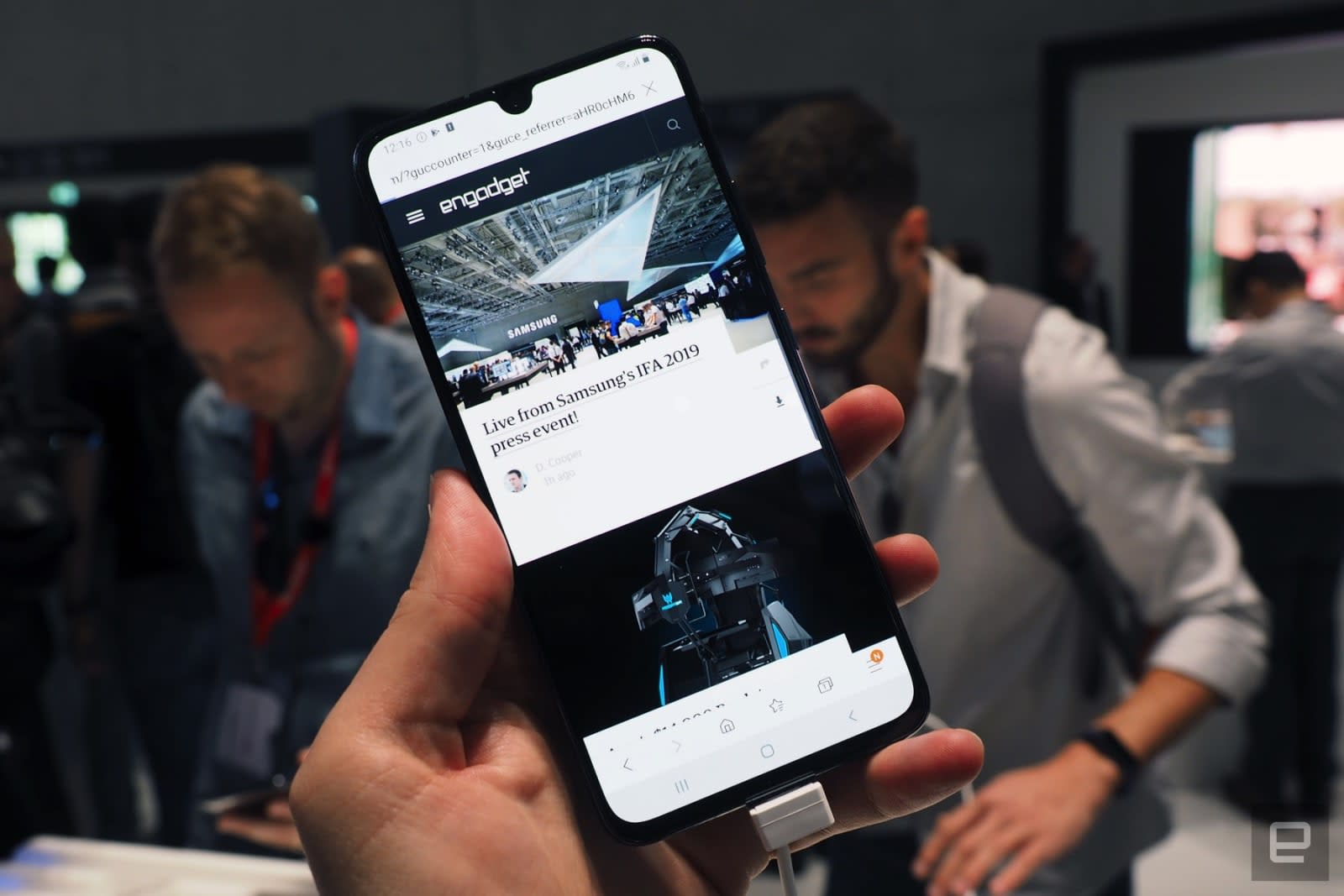 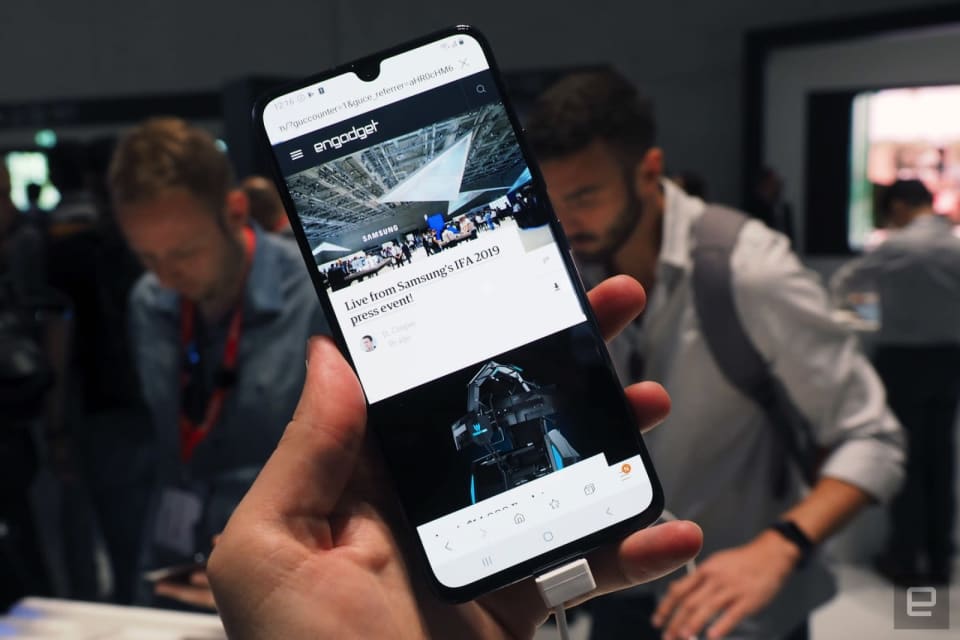 Samsung isn't just launching 5G devices at the upper echelons of its product line, because not all of us can afford a flagship. The Galaxy A90 5G is the company's first 5G handset for those folks who aren't willing, or able, to blow upward of a grand on their phone. And, at first blush, it looks like the sort of smartphone that's so good that you might completely forget it's not a high-end, look-at-me flagship.

First, the basics, which are really anything but. It's a 5G handset that has plenty of similarities with the Galaxy S10 5G. That includes its Snapdragon 855 Processor and its 6.7-inch AMOLED Infinity Display, with almost no bezel around the frame. The screen is gorgeous, albeit only FHD compared to the Galaxy S10 5G's Quad HD+ screen. But only the snobbiest of snobs would gripe that a phone of this class can't beat a top-of-the-line flagship.

The other sign you're not rocking a flagship phone is the waterdrop notch in the middle of the top bezel, which holds the 32-megapixel forward-facing camera. I am normally a fan of punch-hole displays, but must admit the rectangular double-camera punch on the Galaxy S10 5G is ugly as sin to me. This, by comparison, looks pretty good.

Rounding out the spec list is a pick of 6GB or 8GB RAM, depending on territories, and 128GB storage that can be augmented with a microSD card. Alas, despite its insistence on dinging rivals for removing the 3.5mm headphone jack, the A90 lacks the most common, and beloved, of all ports. Boo. Which at least makes it even more like Samsung's flagships. On the photography front, it has the same live focus and other software effects that you find on flagships. Not surprising, since the phone was built with one eye on YouTuber and Instagrammer demographics. There are a trio of main cameras on the back: a 48-megapixel f/2.0 primary lens, a 5-megapixel, f/2.2 depth sensor and an 8-megapixel, f/2.2, 123-degree wide-angle optic. It's hard to be sure in trade show conditions, but it does look as if images taken with the primary camera come out a little flat, although that could be because of the intense lighting at Samsung's booth.

Naturally, we'll have to wait until the full review to make any firm conclusions about the performance of its 5G modem. And how long it'll run with that 4,500mAh battery (again, same as the S10 5G), although we'd hope that we'd get a decent day's worth of use out of a phone with that much power.

If you are tempted, you'll need to get this thing into a case as soon as you buy one, because its glossy glass back is a friend to no-one's fingertips. Not only does it slide in your hand, it picks up fingerprints like nobody's business, and will look awful unless your palms are bone dry. There's a nice hatch-pattern on the back, although it's hard to see on the darker of the two models (the pastel blue model highlights it well, however).

But, that aside, the A90 5G doesn't feel like a device that's a significant step down from the Galaxy S10 it most closely resembles. It looks gorgeous, and feels nicely put together, rather than some of the flimsier hardware you normally get on less premium phones. If a 5G Galaxy S is out of your price range, you'll not miss out on much if you opted for this device instead. In Europe, the A90 5G will retail for €749, which currently converts to roughly $827, but you'd expect it to cost far less in the US proper. Compare that to, say, the Galaxy S10 5G (which also has a 6.7-inch display) which is priced at $1,299, and you can judge the extent of your savings. The fact that the A90 5G costs "two and a bit Galaxy Folds" says it all, really. It'll be coming to other markets in the near future, although we're waiting on Samsung to say exactly when, and where.

In this article: 5G, A90 5G, Galaxy A90 5G, gear, ifa2019, mobile, Samsung
All products recommended by Engadget are selected by our editorial team, independent of our parent company. Some of our stories include affiliate links. If you buy something through one of these links, we may earn an affiliate commission.