The Sonos Move is more than a Bluetooth speaker

It's a full-fledged Sonos device; one that you can take anywhere.

For its entire history, Sonos has prided itself on delivering high-quality, wireless home audio. Among other things, that's meant using WiFi rather than Bluetooth to stream music. Even as "premium" Bluetooth speakers flooded the market, Sonos stuck to its guns, convinced it was doing things the "right" way. And even though the company's speakers generally deliver an excellent audio experience, plenty of its fans still have asked for Bluetooth over the years.

In the same vein, Sonos users have been asking about outdoor speakers for years now. So far, all Sonos speakers have been designed to be placed in one spot and left there; the company doesn't make any battery-powered devices, and everything is dependent on an internet connection.

That all changes later this month when Sonos releases the Move, its take on the battery-powered, portable speaker. The $399 Move is the first Sonos speaker with batteries and Bluetooth, and it's built to resist pretty much any environmental situation it could be subjected to. In these ways, it's the most unique speaker Sonos has made in years, and it required the company to drop some dogmatic thinking about the technology in its products. 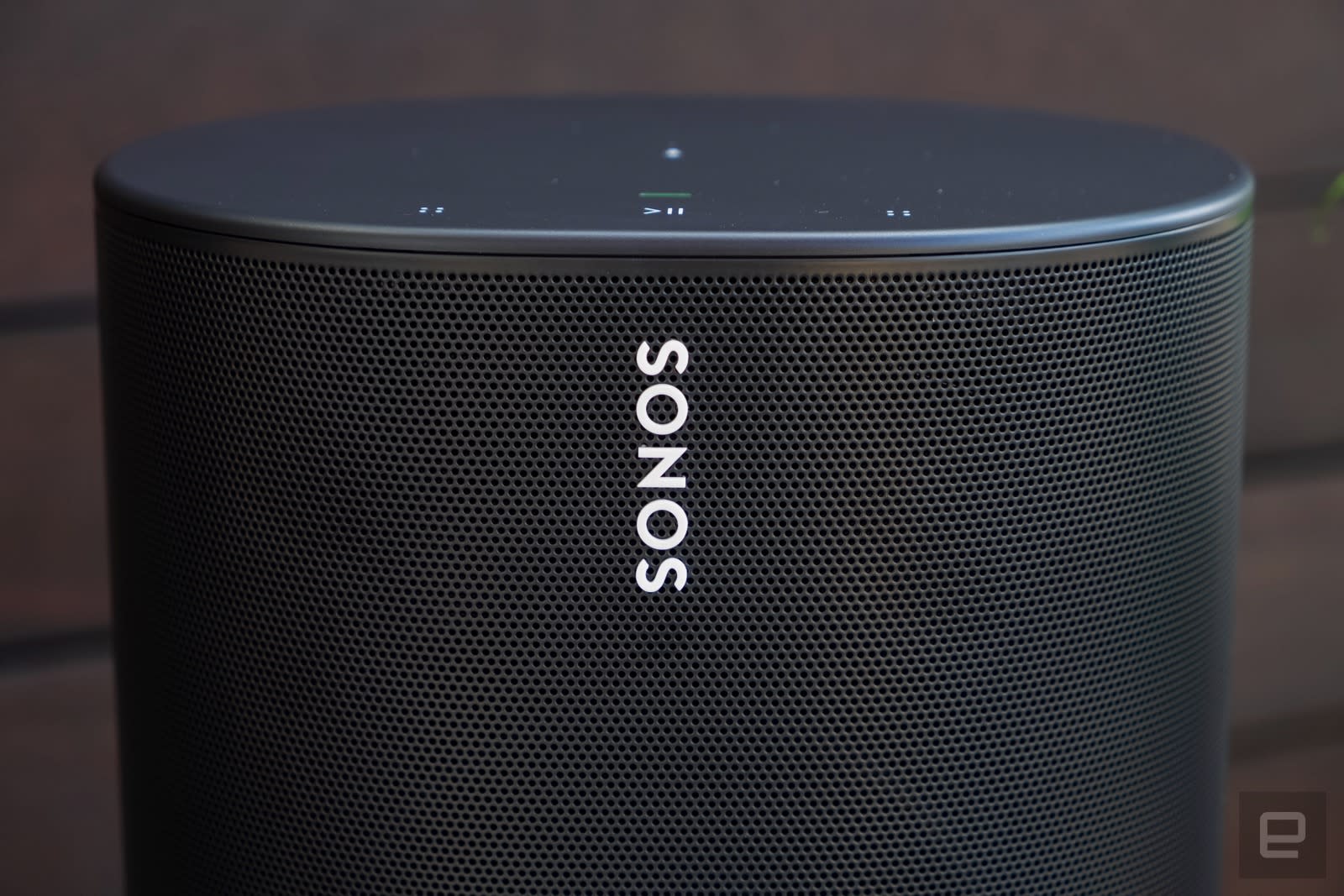 Just another Sonos, at first

At first glance, the Move seems like any other Sonos speaker. It's a tall, dark gray oval with a flat touch-sensitive top, like a bigger Sonos One. It has all the features you'd expect from a modern speaker, including support for Alexa, Google Assistant and AirPlay 2. You can stream music to it from dozens of audio services using the catch-all Sonos app. And if you have multiple Sonos speakers in your home, the Move can be grouped with those for multi-room music playback.

But as the name implies, the Move is meant to be... moved. Pick it up from the included charging ring and the battery should provide about 10 hours of playback (we'll have to test that claim, of course). And while Sonos says that the Move has the strongest WiFi of any product it has built, the company built this speaker to go outside the home, beyond your WiFi signal. For those occasions, yes, you can switch over to Bluetooth by pressing a button on the speaker's back. From there, it'll just work like any other Bluetooth speaker.

The Bluetooth switch on the back is tucked away underneath a nicely-integrated handle, alongside the traditional Sonos sync button for setup and -- for the first time -- a power button. When the Move is plugged in (either in its charging cradle or through USB-C, another first), you don't need the power button for anything. But Sonos designed the Move to last much longer in sleep mode than its 10 hours of playback time. So if the speaker isn't being used, it goes to sleep and can last multiple days away from a charger. To wake it up, just tap the power button or use the Sonos app to start playing music. 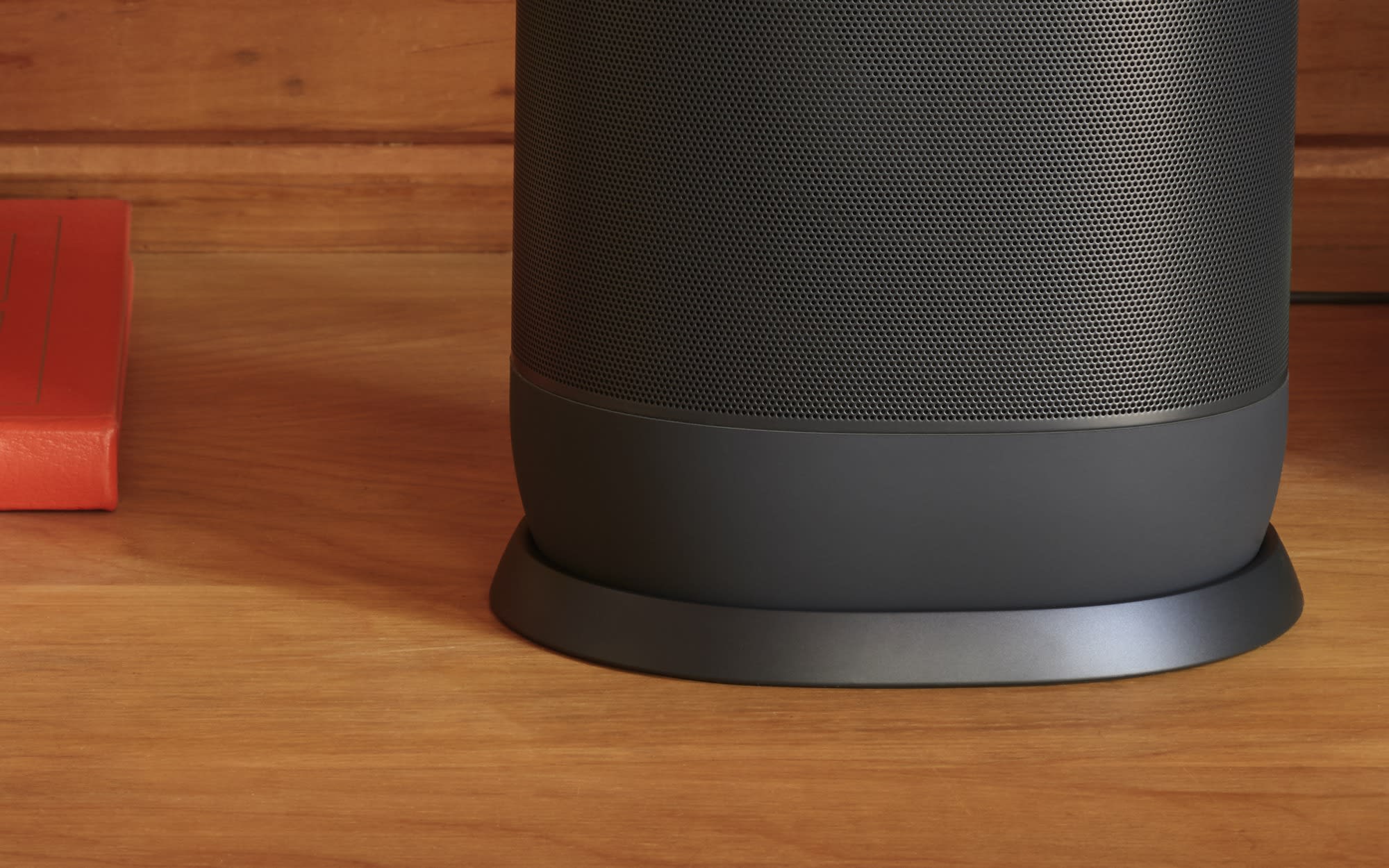 A close-up of the Move's charging ring. Image credit: Sonos

As the first speaker Sonos has ever built to be used outside, the Move presented some new engineering challenges. The company set a goal to make the Move work in basically any environment you can throw at it, and at first glance that lofty goal seems to have been met. The Move is rated IP56, which means it's both dust- and water-resistant. Although the Move can't be submerged in water (not that anyone would really want to do that), it'll survive being left out in rain or snow. And the dust-resistance rating means the Move should easily survive being tossed in the sand at the beach.

During a session with press, Sonos showed off the Move's strength with some elaborate demonstrations. One station whipped up a small sandstorm around the speaker, while another sprayed it with water from every direction. The Move was dropped from about three feet repeatedly, and Sonos said it could be dropped from shoulder height without an issue. The company designed a new color finish that isn't terribly dramatic but is meant to be more resistant to UV light than the traditional black and white finishes that usually show up on its speakers. Sonos also exposed the Move to dozens of spills from substances like oil, wine, bleach, mustard and much more — nothing impacted its performance, and everything was cleaned off with water without issue. And the speaker is rated to work in a frankly absurd range of temperatures, all the way down to 14 degrees F and up to 131 degrees F (-10 to 55 Celsius).

It goes without saying that most people are not going to use the Move in the rain or snow or in below-freezing temperatures. But this protection is here so that people can push the boundaries of what they might do with a consumer electronics gadget and not be let down: Go ahead and forget the speaker outside after a night hanging out using it, it won't be ruined by the elements. It's about thinking through all the various scenarios that come with a portable, outdoor-focused speaker and making sure it's covered in any reasonable scenario someone might experience. Forgetting a speaker outside in the rain certainly seems like a plausible one. Of course, just as with battery life, we'll need to test the Move ourselves and see how it holds up, but all indications show Sonos going far beyond what the average person will subject the speaker to. 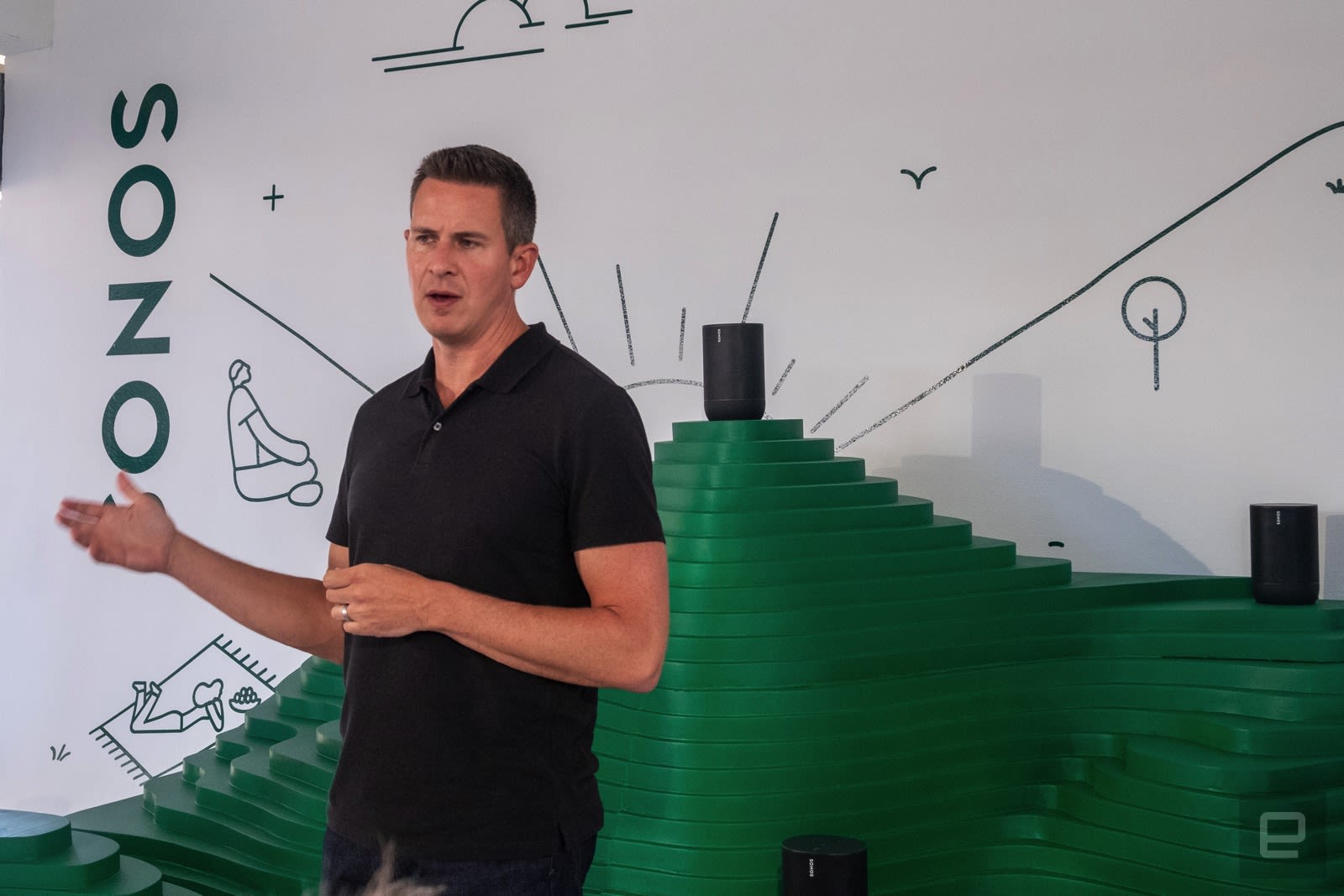 From a technical perspective, adding Bluetooth didn't present the same kind of engineering challenge as building the Move to resist the elements. After all, Bluetooth is a relatively stable, mature technology at this point. But it's one that Sonos has never put in its speakers before. Indeed, for years a big part of Sonos' marketing message was the superior audio quality it offered by streaming songs directly to its speakers via WiFi. Bluetooth, the company said, was prone to disconnects, provided lower-quality playback and would interrupt your music with notifications and other sounds from your phone.

That all may be technically true, but Sonos faithful have been asking the company to add Bluetooth for years. The Move presented the right opportunity to bring Bluetooth on board, but it required the company to overcome thinking that CEO Patrick Spence called "dogmatic" and no longer based in the reality of what consumers want or what the product required.

While Sonos did include Bluetooth, the company figures that most people won't need to use it very often. The speaker's WiFi range should be strong enough that most people's backyards and porches will be covered. But for any beach or camping excursions, Bluetooth is a must-have that'll make the speaker far more useful.

But how does it sound?

The Move also has the distinction of being the first Sonos speaker with automatic Trueplay tuning. Introduced in 2015, Trueplay uses the microphone on an iOS device to optimize a Sonos speaker's audio to the location where it's placed. Until now, you've needed to walk around the room where the speaker is placed, waving your phone so the software can analyze the listening environment. But the Move will listen to the music it's playing and automatically adjust the output on the fly to remove distortion. Given the Move is meant to be relocated much more frequently than other Sonos speakers, auto-tuning was a necessity. Especially when you consider that smart speakers from Google and Apple both can automatically adjust their audio to their environments.

None of the technology and engineering Sonos put into the Move matters if it doesn't sound good. Fortunately, as with every other speaker Sonos sells, the Move sounds great. It features two Class-D digital amplifiers, one mid-woofer and one tweeter, the same configuration as the smaller Sonos One, though with different components made specifically to fit the Move. As a speaker designed to play outside, where sound generally isn't reflected but instead dissipates into the air, the Move is significantly louder than the One, though they both have similar audio profiles. It's a clear, punchy speaker that isn't huge on bass due to its relatively small size -- but it's very balanced and pleasant to hear at any volume.

As for auto Trueplay, I only really got to experience it in a controlled demo where the Move was placed inside a small bookshelf cubby with walls surrounding it. Those walls magnified the bass to an unpleasant degree, but about 20 seconds later the sound was cleared right up. Hilmar Lenhert, audio technology manager at Sonos, told Engadget that auto Trueplay calls upon the tens of thousands of Trueplay datasets that the company has collected since it first launched the feature to make those adjustments as fast and accurate as possible.

The big question, as always, is whether people will open their wallets for this product. The $399 price tag isn't exactly cheap, especially when compared to to the glut of Bluetooth speakers on the market. Some are cheap and essentially disposable, while others offer genuinely good audio quality and similar levels of weather resistance -- particularly UE's speakers, which are completely waterproof. There probably aren't any that offer the intersection of sound quality, features and outdoor resistance that the Move does, though. As with most new Sonos products, fans who already have a few Sonos devices at home will find the Move to be extremely handy. But even if you don't, a portable, high-quality speaker that can go anywhere in and out of your home is a pretty compelling proposition. It certainly sounds like a good introduction to the Sonos ecosystem, but again that $399 price point makes it a tough sell unless you already know the company's products work for you.

For that money, you could buy a $199 Sonos One and a less expensive Bluetooth speaker for when you need something on the go and save some cash while you're at it. But in a world when we all already have too many damn gadgets, there's definitely something compelling about a single speaker that can do it all -- and it'll almost certainly sound better and be more durable than a typical Bluetooth speaker.

Update, 9/5/19, 1:50PM ET: This post originally stated that the Sonos Move worked with the mesh networking system that other Sonos speakers can create. Sonos has clarified that the Move doesn't support that feature, so we've removed the incorrect information.