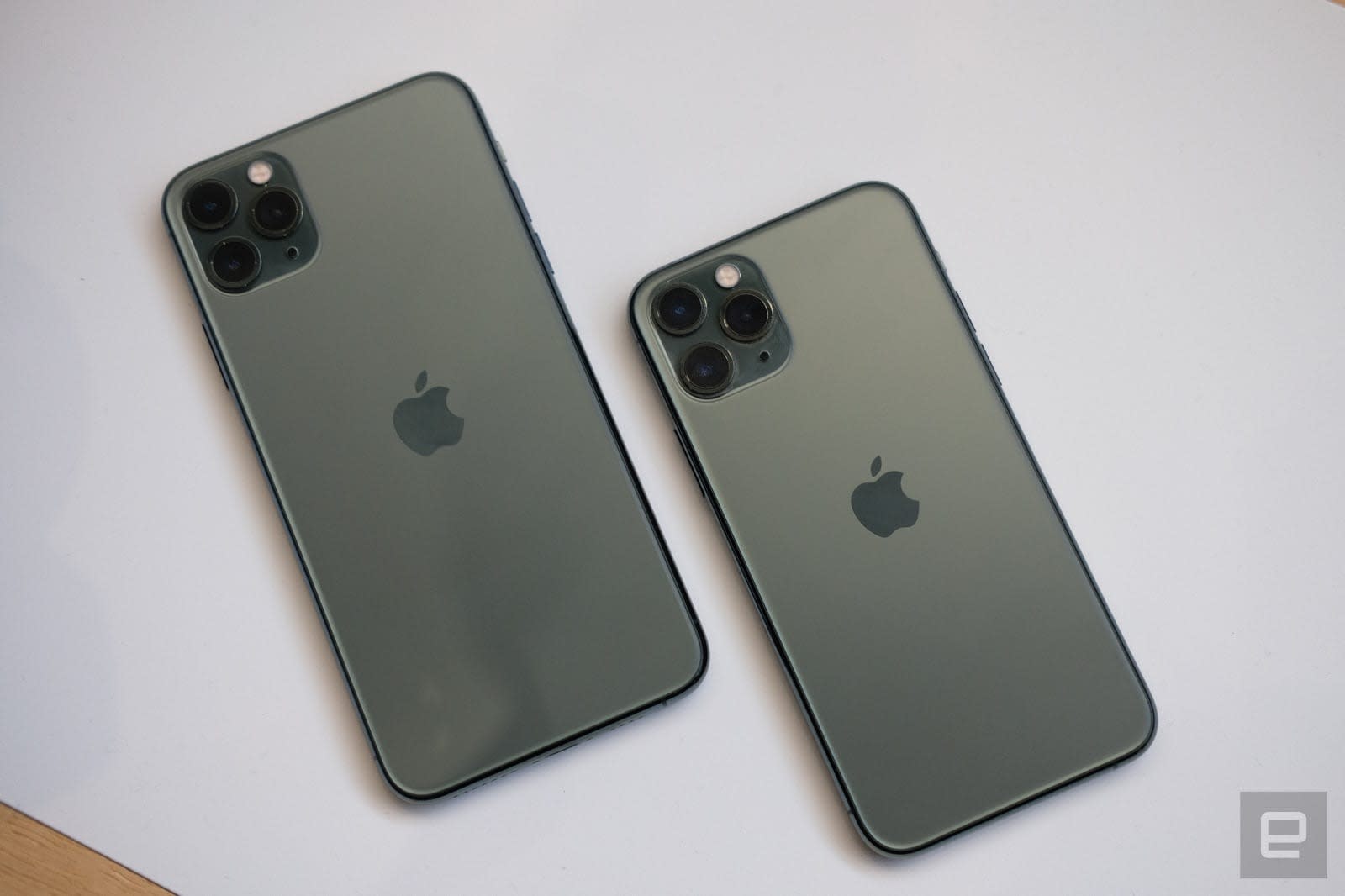 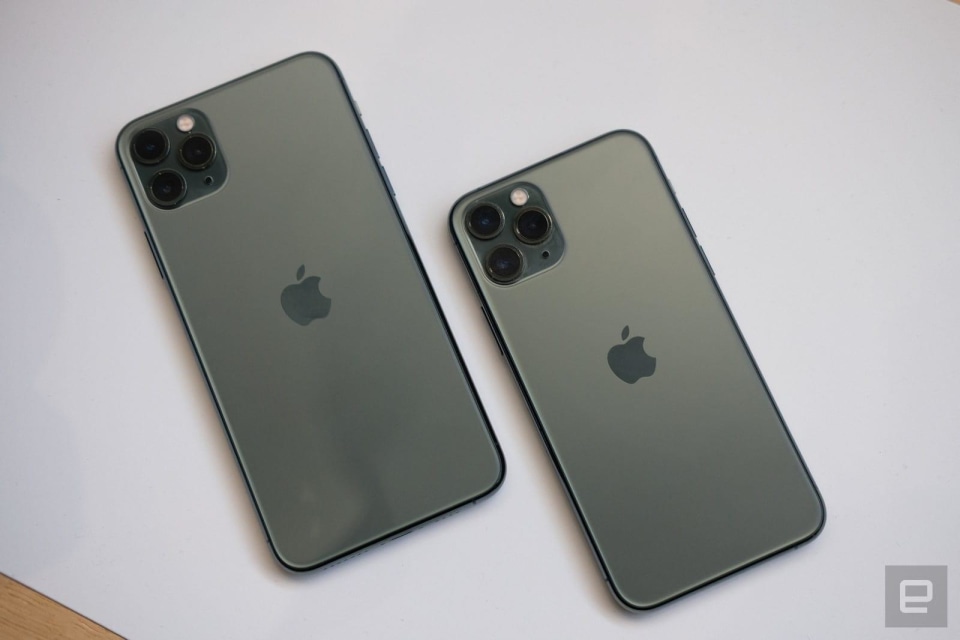 Today's Apple demo room felt like more of a madhouse than usual, and the clear star of the day so far has been the iPhone 11 Pro. Among other things, the Pro represents the biggest shift to the iPhone's branding since the 4S kicked off a multi-year naming trend. There's much more to this phone than just a name change, though. It might not seem like the most exciting step forward from devices like the iPhone XS and XS Max, but there are a few things here that really help the flesh-out the iPhone formula. 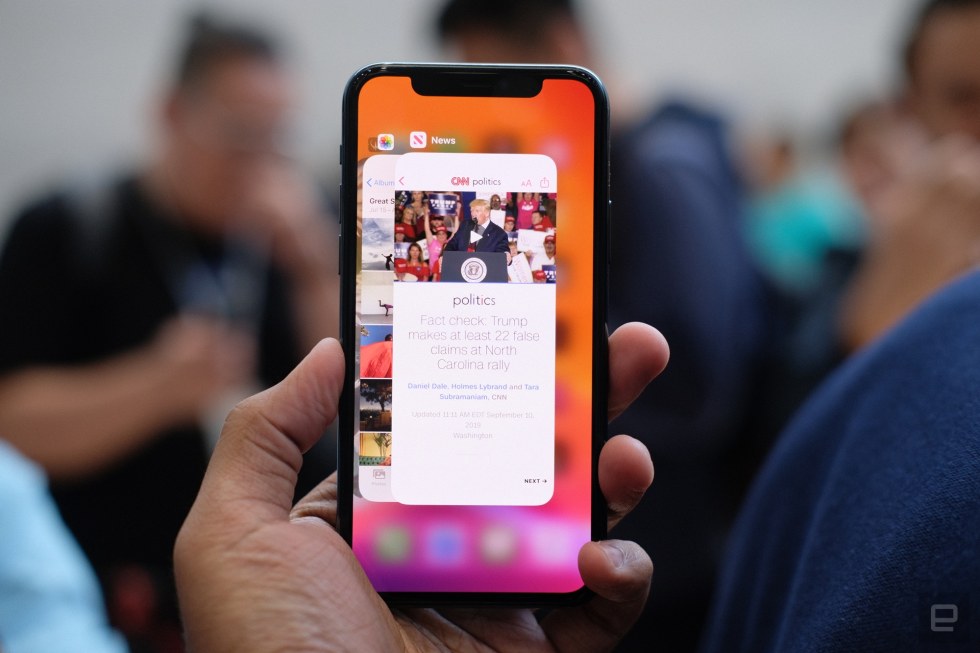 It's hard to get a sense for how well something really works when you're pressed up again five or six other people trying to get their hands on the same devices. (It's even trickier when Tim Cook sets up shop behind you for a chat with Anthony Davis and Karlie Kloss.) Because of that, it was difficult to test some of Apple's claims. Sure, the OLED display used the Pros look great -- they're very bright and super-saturated without looking downright wrong -- but the differences between these and the screens we got last year were subtle at times.

It was also tough to get a feel for the A13 Bionic chipset -- I tried a handful of Apple Arcade games, all of which looked great and ran beautifully. And I didn't notice any slowdown as I leapt from app to app and generally tried to throw the Pro and Pro Max for a loop. Of course, these were all apps Apple specifically chose to put on their demo devices; of course they all worked well. Someone would probably get canned if they didn't. Suffice to say though, the time I spent with the Pro and Pro Max left me with the impression that there's very little they couldn't handle with ease.

Some things were, however, much more obvious. If you've used an XS or XS Max before, you basically know what you expect in terms of look and feel — not that there aren't any differences. After years of fumbling slippery, slick glass iPhones, the matte finish Apple used for the Pros seem like a somewhat helpful touch. (More than anything, though, they just feel good.) The new green finish is a nice touch too, though it's so muted it hardly really counts as "green." Still, after years of expensive iPhones that largely came in the same colors, I'm pleased Apple decided to mix it up a just a little. Can we do better than earth tones next time, though?

This is also the first time in years that Apple left 3D Touch out of its most expensive smartphones. You won't miss it. The company learned with the iPhone XR last year that it could replicate the feature's value with just a long-press on the screen instead of a pressure-sensitive push, so out it went.

Even after just a bit of hands-on time, the iPhone Pro's three main cameras seem like a big improvement over what we got in previous models. That's mostly because of the extra flexibility this new wide-angle cameras -- these are pretty commonplace in higher-end Android devices, and Apple finally decided to embrace the change. We obviously couldn't pull any sample photos off the iPhone Pros, but Apple's interface work here is impressive; when you're shooting with the standard wide camera, you see that your field of view actually extends behind the settings and camera controls, to signify you can see more than what you currently can. And while I was using the on-screen dial to finely set my focal length, I didn't notice any shuttering as I switched between cameras.

These phones obviously aren't final yet, but they're a little more polished than I had expected. That's especially true of new additions, like the ability to shoot slow-motion video with the 12-megapixel front-facing cameras. I have, shall we say, a bit of extra meat on my face, and the Pros capture my flopping fowls admirably -- the results weren't pin-sharp or anything, but that was honestly for the best. I do regret not being able to some of Apple's apparently updated video editing controls; it isn't the first company to suggest that its $1,000 phones could be feature-complete tools for creators, but based on what I ran into, that seems like a bit of a stretch.

So, are a better screen, a more powerful chipset and an extra camera really enough to make an iPhone a Pro? Maybe -- it'll take time to really get a sense of what they bring to the table, and even more time to see how they all work together to contribute to the bigger picture.

Honestly, I get the feeling from these iPhones that we're in sort of a transitional year, and others have already suggested that some of the really big changes to the iPhone are actually coming next year. That's fine by me, really -- Apple can spend some time really figuring out what people want out of an iPhone Pro, and go from there.

In this article: apple, gear, hands-on, iphone, iphone 11 pro, iphone 11 pro max, iphone2019, mobile, iphoneevent2019
All products recommended by Engadget are selected by our editorial team, independent of our parent company. Some of our stories include affiliate links. If you buy something through one of these links, we may earn an affiliate commission.