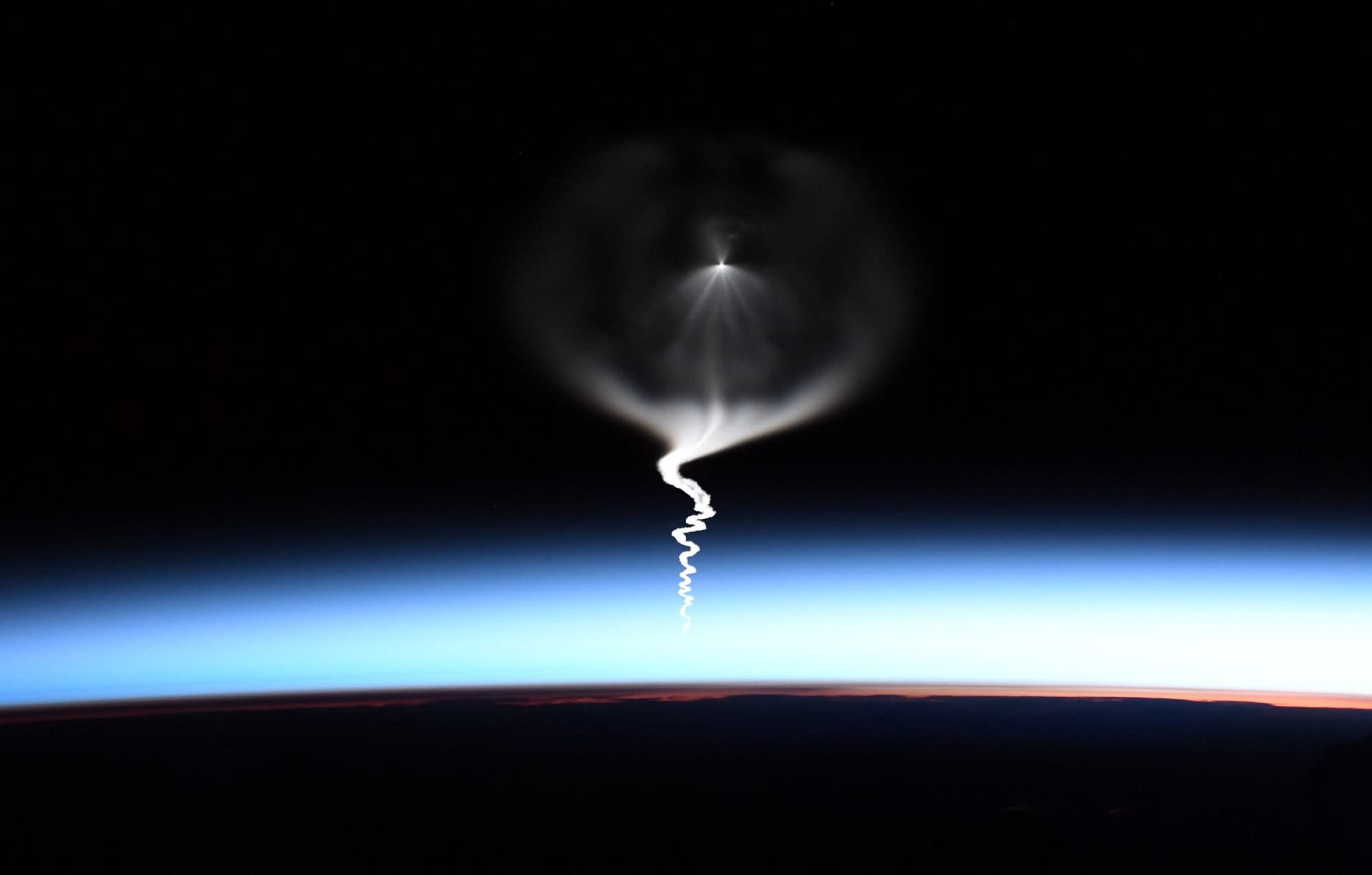 Yesterday, NASA's Expedition 61 mission launched from the Baikonur Cosmodrome on a Soyuz MS-15 rocket and docked to the International Space Station (ISS) some six hours later. From the ground, it was a spectacular liftoff as usual, but this time, the best view might have been from the space station itself. With her best friend Jessica Meir onboard, astronaut Christina Koch captured an eerie, magnificent photo of the Soyuz craft as its second stage rockets propelled it toward the ISS.

What it looks like from @Space_Station when your best friend achieves her lifelong dream to go to space. Caught the second stage in progress! We can't wait to welcome you onboard, crew of Soyuz 61! pic.twitter.com/Ws7tInY58P

The photo shows the curling smoke plumes from the first stage liftoff and another mini-plume from the second stage trajectory. The spacecraft's second-stage engine is clearly visible as a bright point, with rays of illuminated smoke extending from the center. The craft is encircled by a ring of vapor, also likely created by the second-stage engine.

Koch didn't say which camera she used, but it's probably the station's workhorse Nikon D4 that she's been pictured with before. Koch is an avid photographer, and wisely stopped down the photo to correctly capture the rocket's plume and atmosphere against the night sky. Because of the reduced exposure level, no stars are visible, but they appear when you crank it up in Lightroom.

Soyuz 61 carried Meir, cosmonaut Oleg Skripochka and the first space traveler from the United Arab Emirates, Hazzaa Ali Almansoori. Meir and Skripochka will spend six months aboard the ISS, but Almansoori will spend just eight days there under an intergovernmental contract between the UAE and Roscosmos. He'll return to Earth on October 3rd aboard the same Soyuz craft along with current ISS residents Nick Hague and station commander Alexey Ovchinin.

Koch, meanwhile, will stay aboard the ISS until February 2020, which will make her the longest serving female astronaut aboard the ISS. Luckily, she'll have some company -- shortly after snapping the photo, Koch got to hug her best friend (below).

In this article: astronaut, Crew, ISS, Soyuz61, space, TheBigPicture, thenewbigpicture
All products recommended by Engadget are selected by our editorial team, independent of our parent company. Some of our stories include affiliate links. If you buy something through one of these links, we may earn an affiliate commission.