During an update on the SpaceX Starship program, Elon Musk just showed off a brief clip that explained part of the plan for using these vehicles to reach Mars. It involved a Starship in orbit around Earth, meeting a similarly-sized vehicle to refuel before it goes on the long trip to another planet. Musk has long touted his desire to make human life "multiplanetary" and expressed this as the way to achieve his goal.

He explained the Starship only requires its "Super Heavy" booster for launches from Earth, so it seems possible that the second vehicle could launch from the Moon powered only by its own Raptor engines. 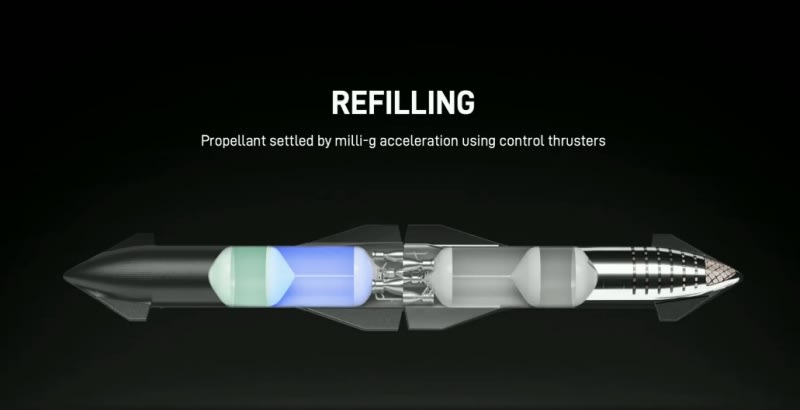 In a graphic, the process is explained as "Propellant settled by milli-g acceleration using control thrusters." The way Musk described it, having the ability to refuel a Starship means it can carry a full 1200 ton propellant load when leaving Earth's orbit. He also showed off an updated version of the Starship's design, with its 50m-long body covered in 301 stainless steel, with ceramic tiles in certain high heat areas.

Starship will use in-space propellant transfer to enable the delivery of over 100t of useful mass to the surface of the Moon or Mars pic.twitter.com/pzCUebidZg

Starship will be the most powerful rocket in history, capable of carrying humans to the Moon, Mars, and beyond pic.twitter.com/LloN8AQdei

In this article: Elon Musk, gear, space, SpaceX, starship, Super Heavy
All products recommended by Engadget are selected by our editorial team, independent of our parent company. Some of our stories include affiliate links. If you buy something through one of these links, we may earn an affiliate commission.