Eliminate the laptop with this smart media-management box.

The original Gnarbox was intriguing. On the one hand, it was a rugged portable drive. On the other, it was a mini PC without a display. Via the companion app, you could connect to the device wirelessly and edit 4K video and high-resolution photos. Today, Gnarbox 2.0 is ready for prime time, and it's a very different proposition.

What remains the same is that the Gnarbox 2.0 is still essentially a screenless PC. It still has a quad-core Intel processor (now 2.4GHz) for wrangling images and video. It still lets you connect media directly to it, and it still has a rugged design for outdoor use.

From here on out is where things start to change. For example, the original has three slots for USB-A and full-size and miniSD cards. Version 2.0 is a little more streamlined, with just two USB-C ports and a full-sized memory card slot for loading media directly onto it (there's an SD card adapter in the box). Ultimately, you can still connect the same things, but you might need a few dongles. Streamlining the hardware is likely the name of the game here. 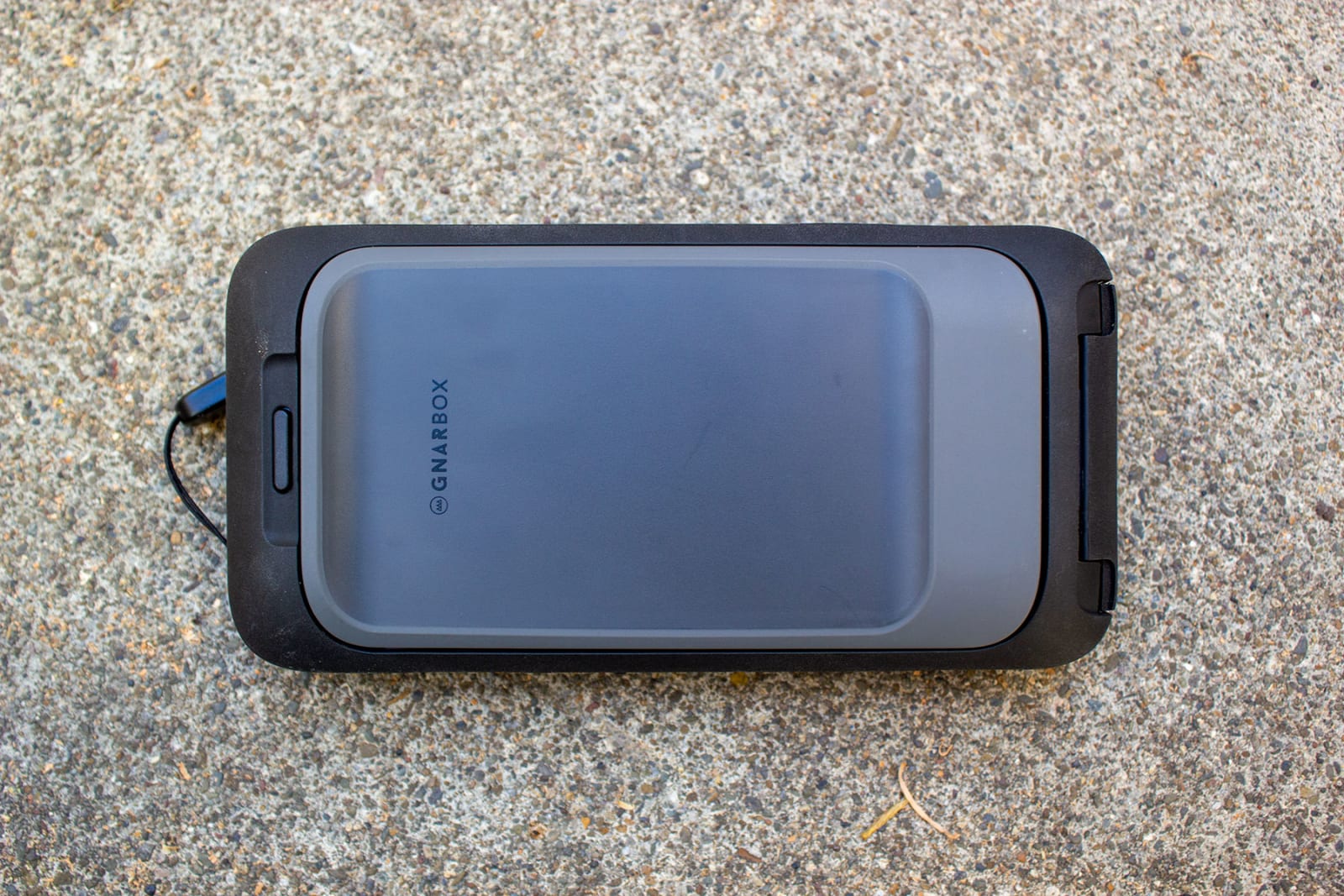 There's also a replaceable 3,000 mAh battery this time around, the clear benefit here being the ability to pack a few spares ($50 each). It's worth noting that I struggled to charge the Gnarbox 2.0 with a variety of power supplies. The company has since told me that you'll want something that can supply 30W for it to work with the new drive. Of course, the power brick in the box works fine, but the first time I tried charging it with a portable battery pack out in the field, I was disappointed it didn't work. PD-enabled portable batteries should all work, but those also tend to be the pricer ones.

There are plenty of other features that should appeal to professionals. RAW support, along with H.264/H.265 and ProRes, is here and the 350 MB/s transfer speeds over USB-C will make file management fairly breezy. The promised three-to-six hours of battery life seems accurate, and the option to carry spares will please more-intense users.

What's really different here is the problem it's trying to solve. The original Gnarbox was pretty versatile. You could backup media to it directly, and tweak video and images for sharing. This time around the focus is clearly on media management, and it's much better at that. The original Gnarbox app no longer works with the new version; you'll spend most of your time in one (or maybe both) of two new apps: Selects and Safekeep. 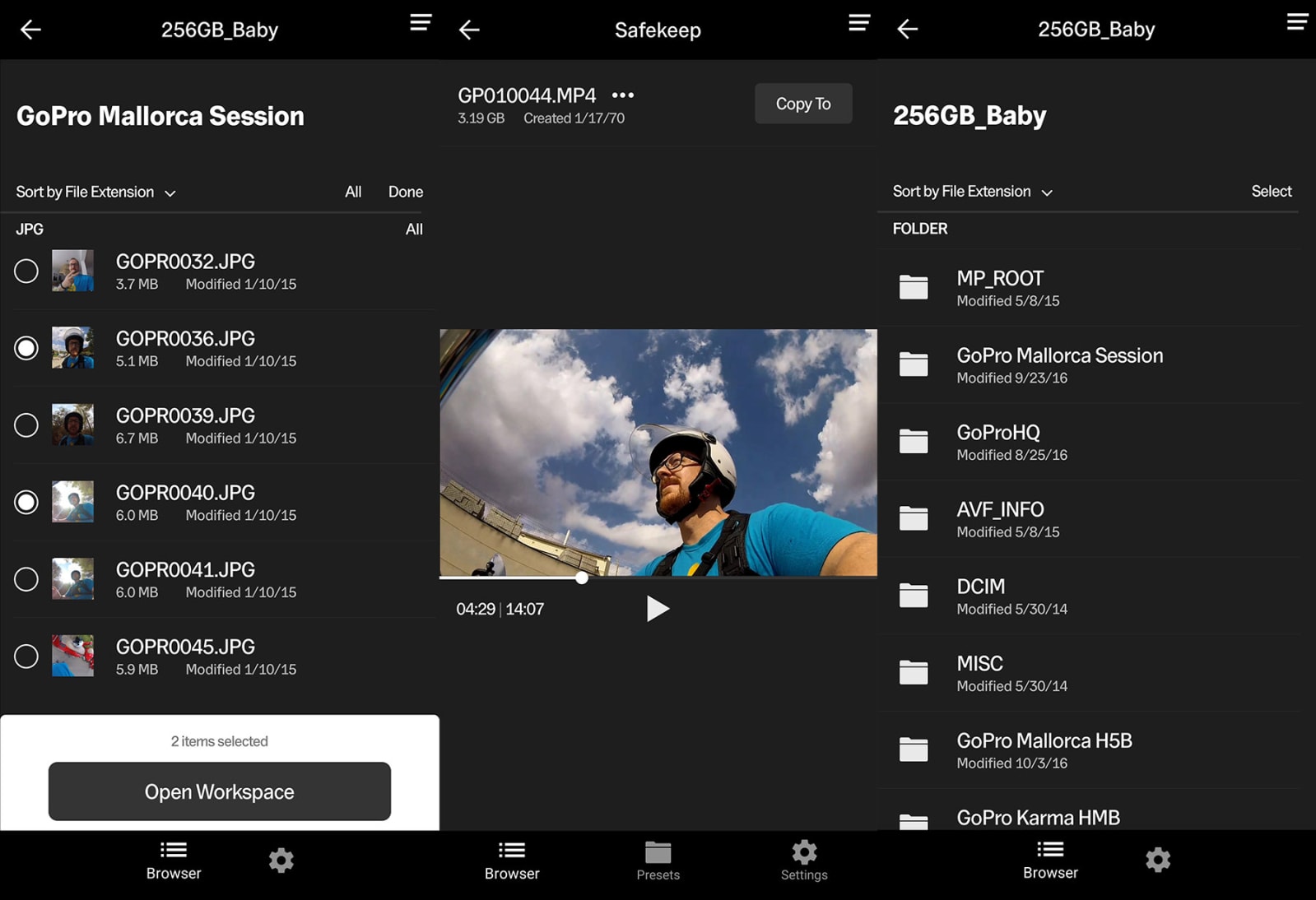 At it's most basic, Gnarbox 2.0 is ideal for photographers who want a quick, portable way to sort, edit metadata and tag photos from their SD card, before exporting the ones you need to other places (be that Dropbox, your phone or beyond). For this, it works incredibly well.

Connecting with my phone to the Gnarbox 2.0 was as easy as joining any other wireless network. From there, the Selects app (powered by Photo Mechanic) recognizes your device and will show the built-in storage or any other storage you have connected in one screen. From here, you can easily drill down to a specific folder, choose images you want to edit the data for and send them to a "workspace" (a sort of temporary folder with just the images you want to work on). From here you can add a star rating or tags, or export them somewhere else.

What you can't do is pinch-to-zoom in on images you have chosen, which is a shame if your image has smaller details that you'd like to check before tagging or exporting. There are also no basic adjustment options like color or exposure — for that, you can work with Lightroom CC on iOS, which Gnarbox integrates with directly.

I also noticed that thumbnails for files on the built-in storage load quickly, but if you're browsing files from an SD card inserted in the Gnarbox, they can take a little while to show up. Sometimes as long as 20 seconds, which adds a little break to the flow. Of course, backing them up to the box's internal storage will solve this, but it's something to bear in mind. 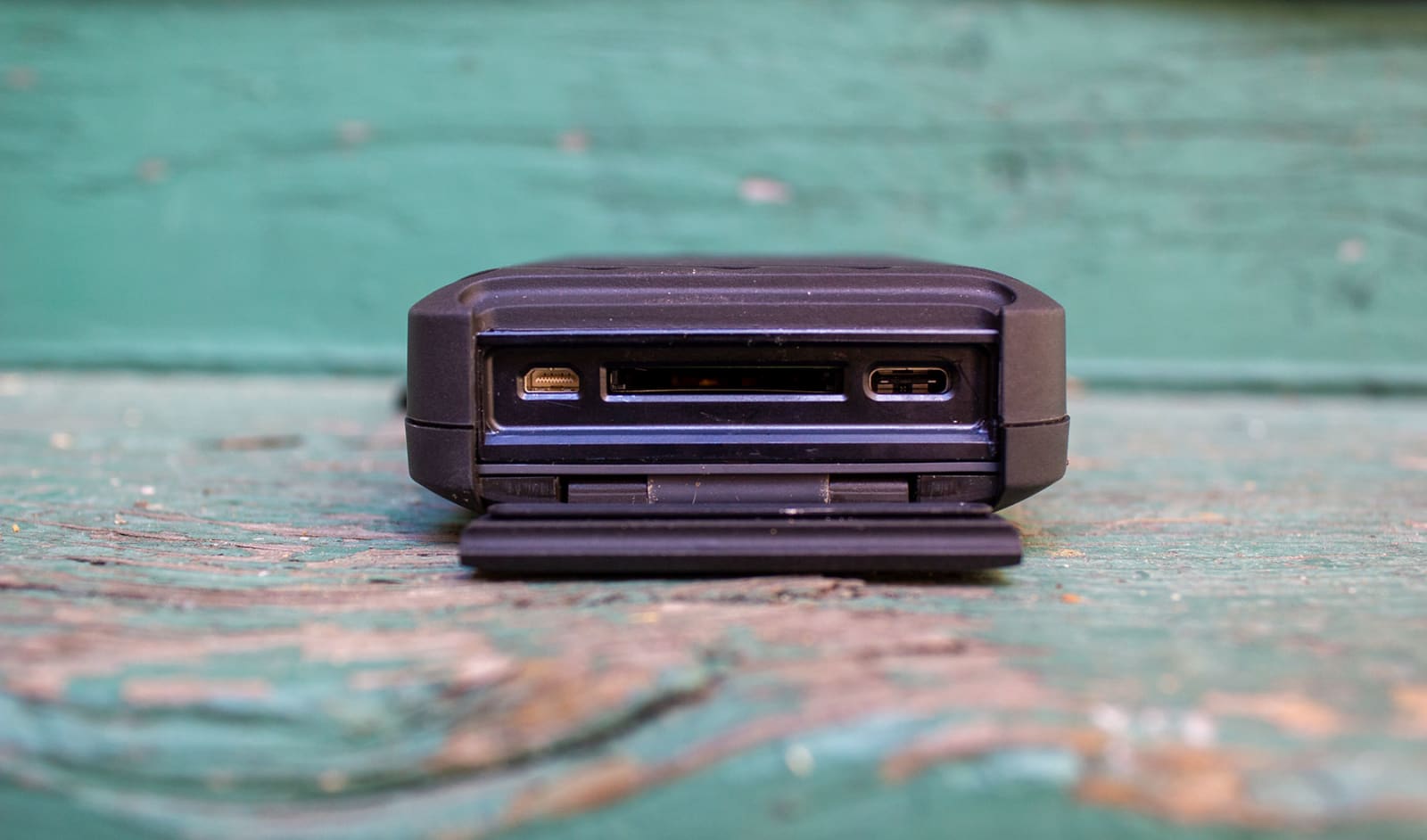 What I can see is this speeding up the whole process from work in the field to the desktop. For example, I often have to head out to take photos of products. I'm no professional photographer, so I tend to take a blanket approach: Shoot way too many photos to increase the odds I have something usable. This then involves me getting back to my laptop, finding a dongle (curse you, USB-C only MacBook) and then either selecting photos from Preview on the memory card or dragging everything to a folder on the laptop.

Working with files from the memory card is less than ideal, as I prefer to keep an original and leave filenames intact (so they remain in order, etc.). With the Gnarbox, I can start this process while I'm on the way home. First by backing up everything to the internal SSD, and then plucking the ones I want to work with into a "workspace." Then they're all ready for me to get to once I get home. As Gnarbox is USB-C too, I can just connect it to my laptop directly and go. It also doubles as a (very expensive) card reader.

Probably one of the more appealing aspects for mobile photographers is the integration with Lightroom CC and LumaFusion (iOS only). If you were already using these tools, the Gnarbox 2.0 will slot right into your workflow and likely eliminate your reliance on your laptop — at least for some of the grunt work. Unfortunately, this doesn't help much if you're on Android. 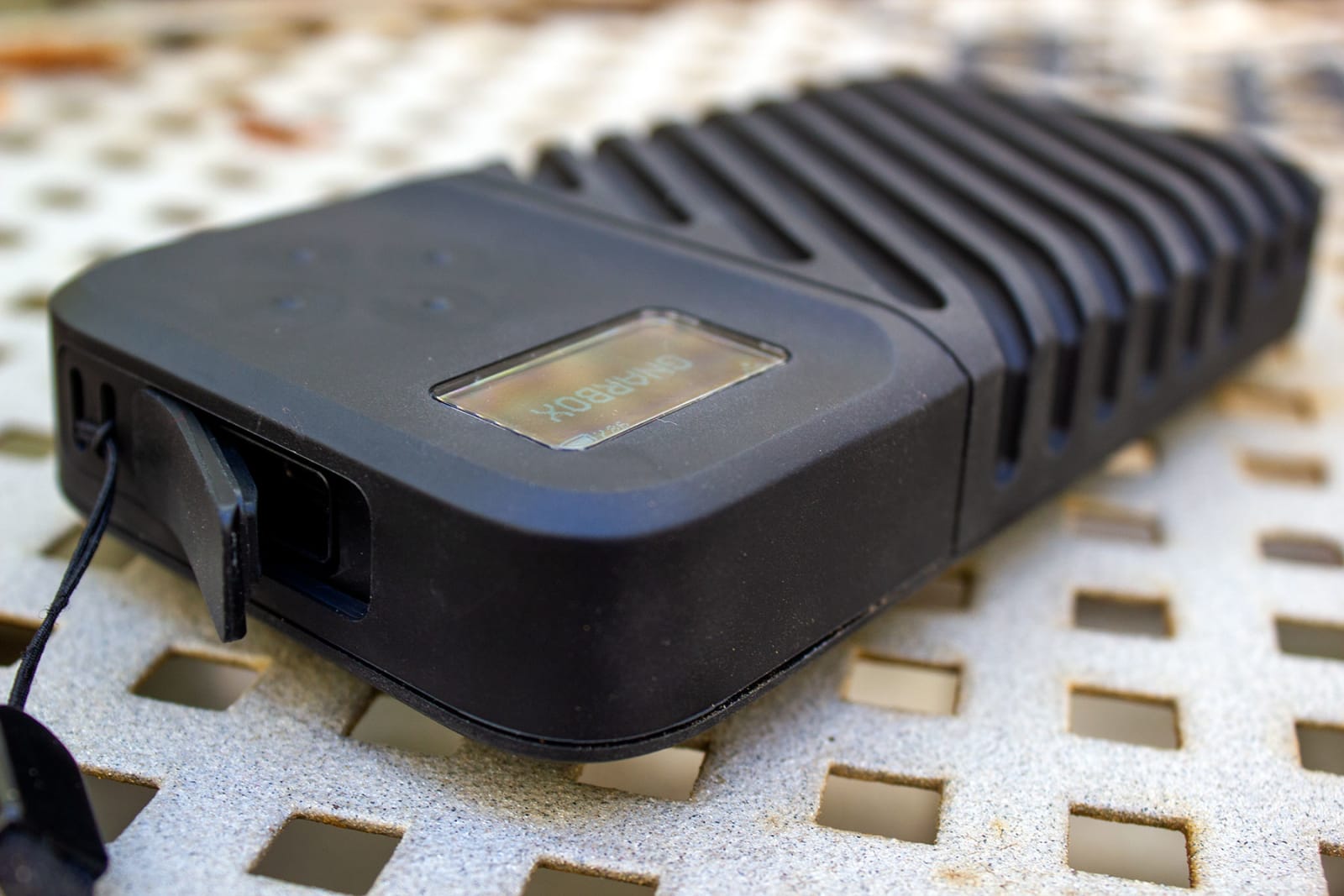 The second companion app, SafeKeep, is a little more straightforward. Here the goal is primarily moving media around, renaming files and folders and previewing videos before you leave a location. There is also the option to set up presets so that Gnarbox can automatically organize files in a certain way, ignore source folders or back things up based on their extension. Safekeep is the primary backup tool, although you can do a basic backup to the internal SSD without needing an app at all.

Being able to preview video is handy, especially without having to break out the laptop. There are two ways to do this. The basic preview moves through you video in steps giving you a still image, or you can "stream" directly from the box for full-motion video. This works pretty well for small files, but I tried it with a larger file (3GB) and it takes a while to buffer. It works, but it's not instant. This is where the HDMI port comes in, as you can also connect the Gnarbox to a TV or display and view your media that way.

There are two connection modes for Gnarbox: Field and Home. As the names suggest, which one you want will depend on where you are. Essentially, Field is for working directly from the Gnarbox to your phone, whereas Home mode allows easier uploading to cloud storage like Dropbox via your office or home internet connection. You can also export to multiple locations at once, so you can back up to your desktop while sharing with a client via the cloud, for example. 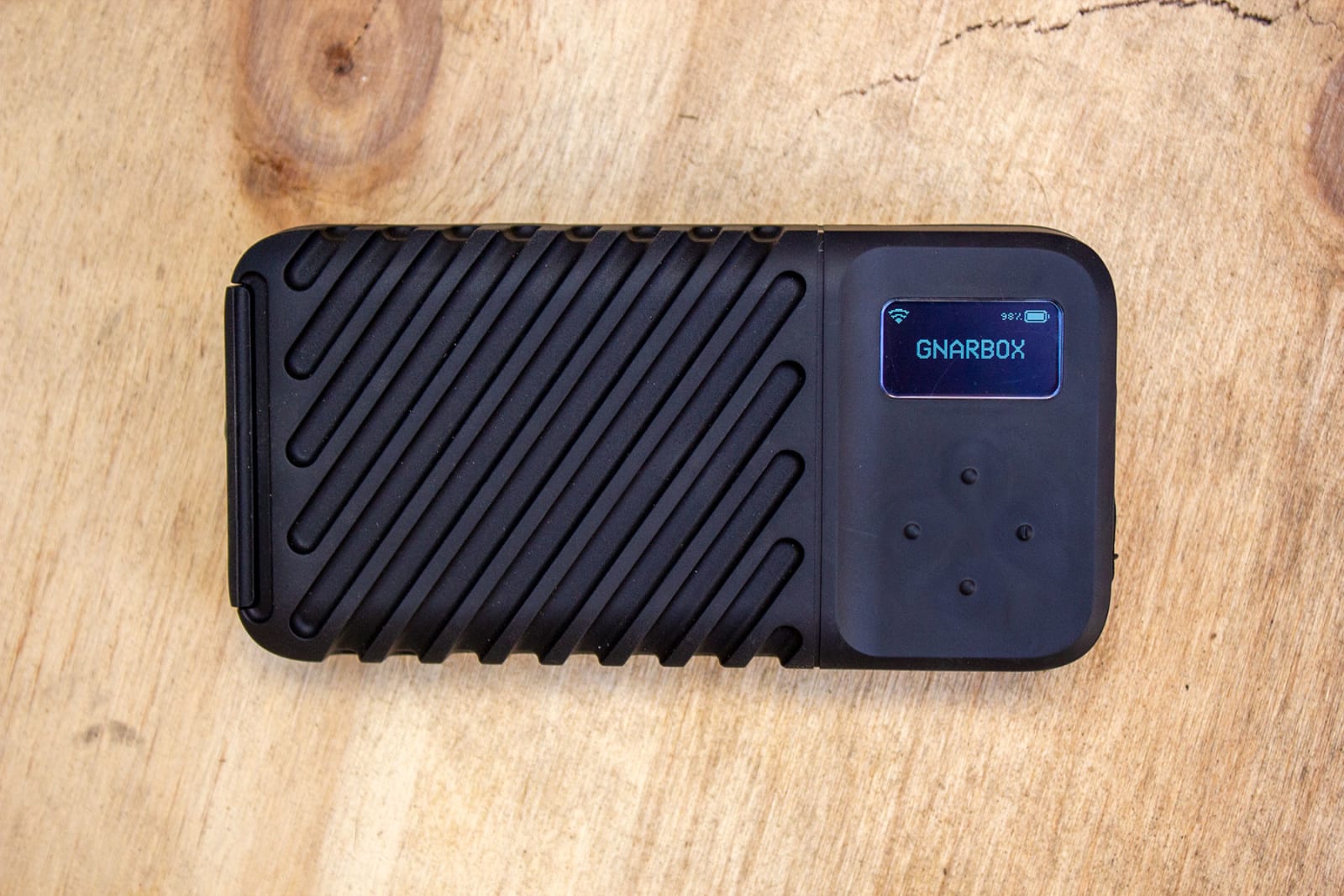 One thing's for sure, compared to the original, Gnarbox 2.0 is a very different experience. The lack of an option to edit files directly makes sense given that established apps are out there. The focus on getting your media "edit-ready" in as quick a time as possible gives it a more specific focus. For this, it works pretty well. I also just like the basic ability to immediately back up a memory card to rugged storage (Gnarbox is water-resistant to continuous heavy rain for as long as 30 minutes).

The integration with key iOS apps still means those who want to edit on the fly can do so, just Gnarbox the company is no longer trying to compete with its own app. The primary goal here seems to be eliminating the laptop either entirely for basic file management, or mostly when it comes to selecting media you want to work with after a shoot.

The one sticking point might be the price. As a new company trying to compete against the likes of Western Digital, it's understandable that a small team with less production volume can't keep costs as low as it would like. And there are some features here you won't find on other products. My sense is that the company has lots more in store, and functionality will grow. For eager early adopters though, it's up to you the potential time savings offset the cost.