Ang Lee is curious. That's why the Oscar-winning director has spent the past decade fighting against the limitations of cinema -- 2D screens and the 24 frames-per-second standard -- instead of just making sure-fire hits. With Life of Pi, he dove into elaborate 3D filmmaking and creating life-like digital animals. After the global success of that film, he set his sights on Billy Lynn's Long Halftime Walk. That drama wasn't particularly well received by audiences or critics, but it allowed him to explore the uncanny realism of combining high framerates (HFR) of 120 FPS, together with 4K and 3D. Now with Gemini Man, Lee's latest film starring Will Smith (and his younger digital double), he's trying to bring his new vision of cinema to a mainstream action film.

Lee's approach is bound to be contentious. High frame rates look overly smooth and hyper-real in a way we're not used to seeing from movies. To many, it just looks "fake." But Gemini Man's set pieces make it clear why he's betting on new tech. During a motorcycle chase between Will Smith's aging assassin and his clone, I felt like I was riding right alongside him through narrow Colombian alleys. It felt visceral in a way a movie chase hasn't felt to me since The Bourne Supremacy. 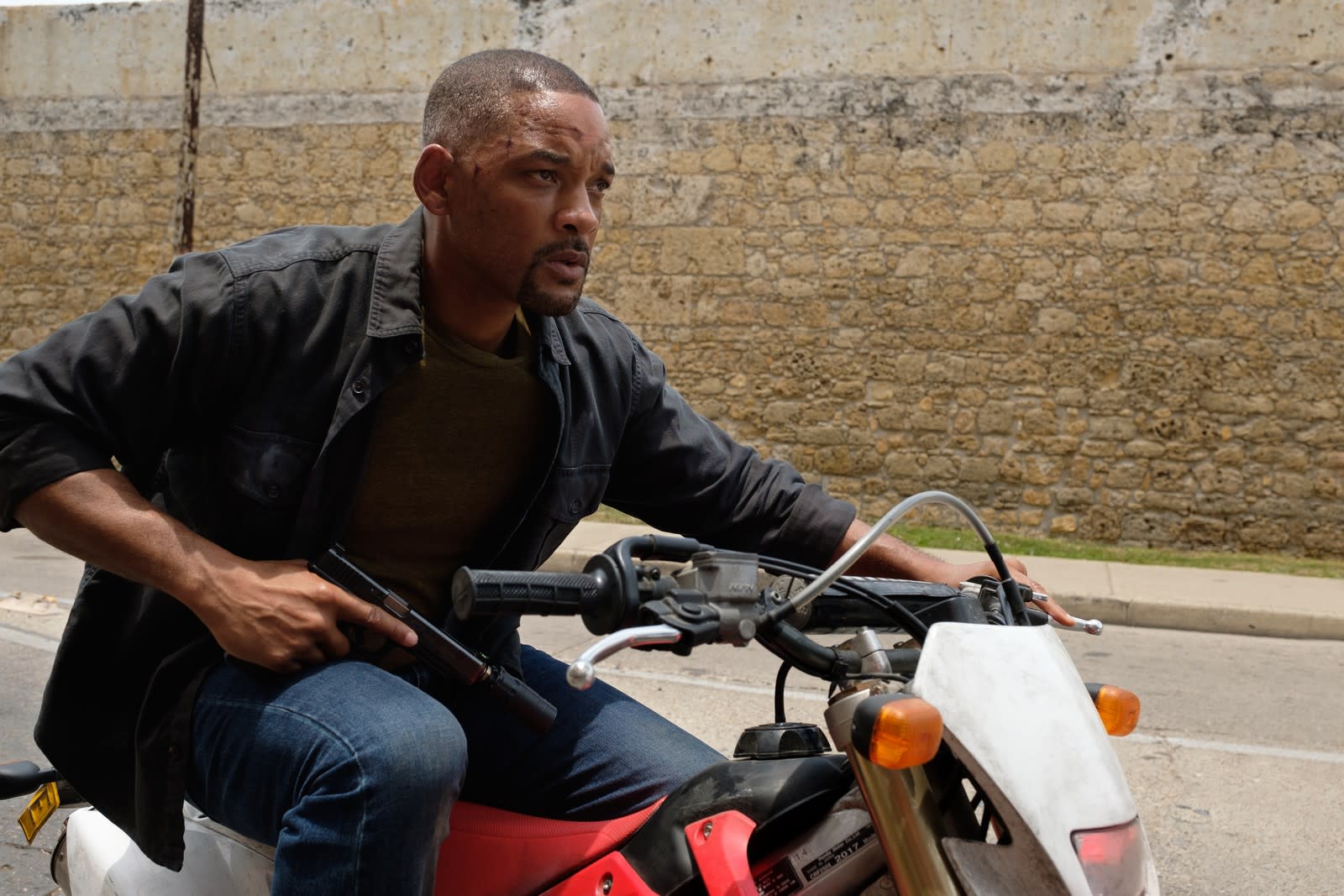 "Sometimes I'm asked to be more normal, because that's what we're used to," Lee said in a roundtable chat with journalists. "I hope, movie by movie, we get in a different way of exciting people [with high frame rates]." He pointed to that bike chase as a great example of the benefits of HFR. Watching someone riding a bike at 24FPS removes you from the experience, whereas with a high framerate and 3D, it's like you're practically there.

So why go to all this trouble? For one, higher frame rates smooth out the jumpy effect (or juddering) you see in films whenever the camera pans around a scene, as well as the blurriness from fast moving objects across the frame. In theaters, those issues are due to the slower nature of the 24FPS standard. But in homes, they're even more problematic. TVs are built to show between 60 and 120 frames per second, so manufacturers have been pushing motion smoothing, which adds fake frames to smooth out 24FPS content.

Like any self-respecting movie fan, I've learned to hate motion smoothing over the past few years. It makes everything look like a cheap soap opera, and invariably speeds up on screen movement. The problem high frame rate films like Gemini Man face is that they share a similar look -- the difference is that they're actually getting additional frames, instead of fake ones. That leads to more detail and a more immersive filmgoing experience, especially when it's paired with the additional depth of 3D.

"High frame rates comes along with 3D, and it all comes from digital [filmmaking]," Lee said. "Once it's digital, it allows dimension unlike film." But, he added, shooting in high frame rates requires a fundamental rethinking of what we take for granted when making and watching movies. Scenes have to be lit differently, and like the jump from standard definition to HD, filmmakers have to step up the level of detail throughout.

That's one reason why Peter Jackson's 48 FPS Hobbit movies looked terrible. He shot them like traditional movies, and the sets and costumes simply looked cheap. I'll admit, those movies left a sour taste in my mouth -- so much so, that I didn't think HFR would ever truly work. But then I saw Billy Lynn's Long Halftime Walk in 120FPS 4K 3D, and I instantly became a believer. It was as if I was peering through a giant window and seeing the actors in real life. It was a strange, yet ultimately thrilling, experience. Gemini Man builds on that in every way, with action scenes that show off what's possible with a higher frame rate. 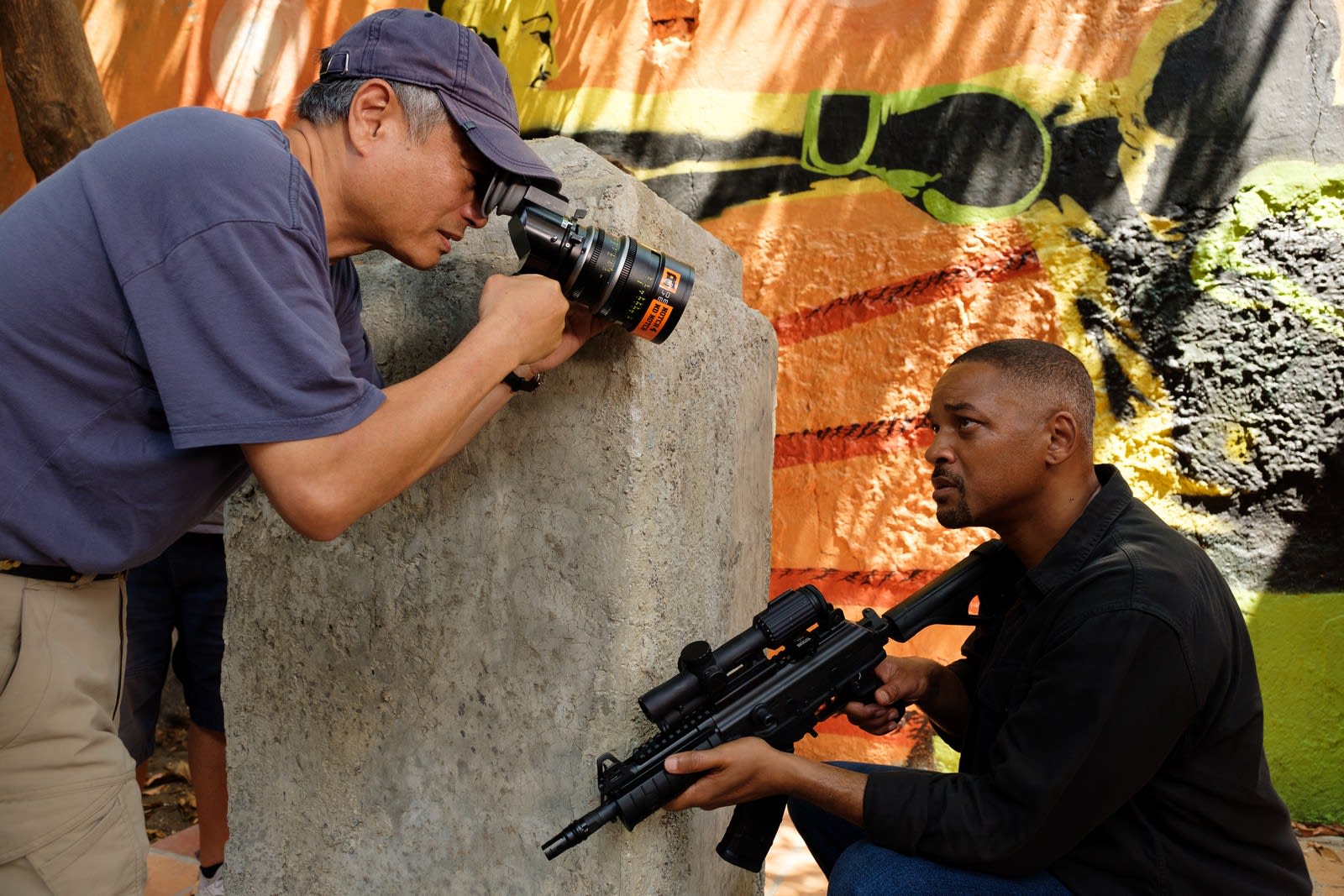 "[3D] is one of our desires -- like the desire to see color, to hear talking pictures, it's just natural because that's what we see in life," Lee said in an interview with Engadget. "Then I realized if you wanted to see 3D properly, experiencing it, you need to raise the frame rate. Once you raise the frame rate, things happen. I realized the way we process the 3D image in our head, because of two angles is quite different. It's not more clear. It's not about resolution, it's just sharper."

HFR gives Gemini Man an immediacy that feels revelatory. It's like you're standing right next to Will Smith during hectic shootouts. And one scene, where he ends up brutally wrestling his clone, feels akin to watching a UFC fight from the middle of the ring. Gemini Man isn't a great movie -- it's basically a lost relic of cheesy '90s sci-fi -- but the experience of watching it is unlike anything I've seen before. It's no wonder James Cameron is also planning to use HFR in his upcoming Avatar sequels. It adds an entirely new level of immersion, just like 3D did for the original Avatar. 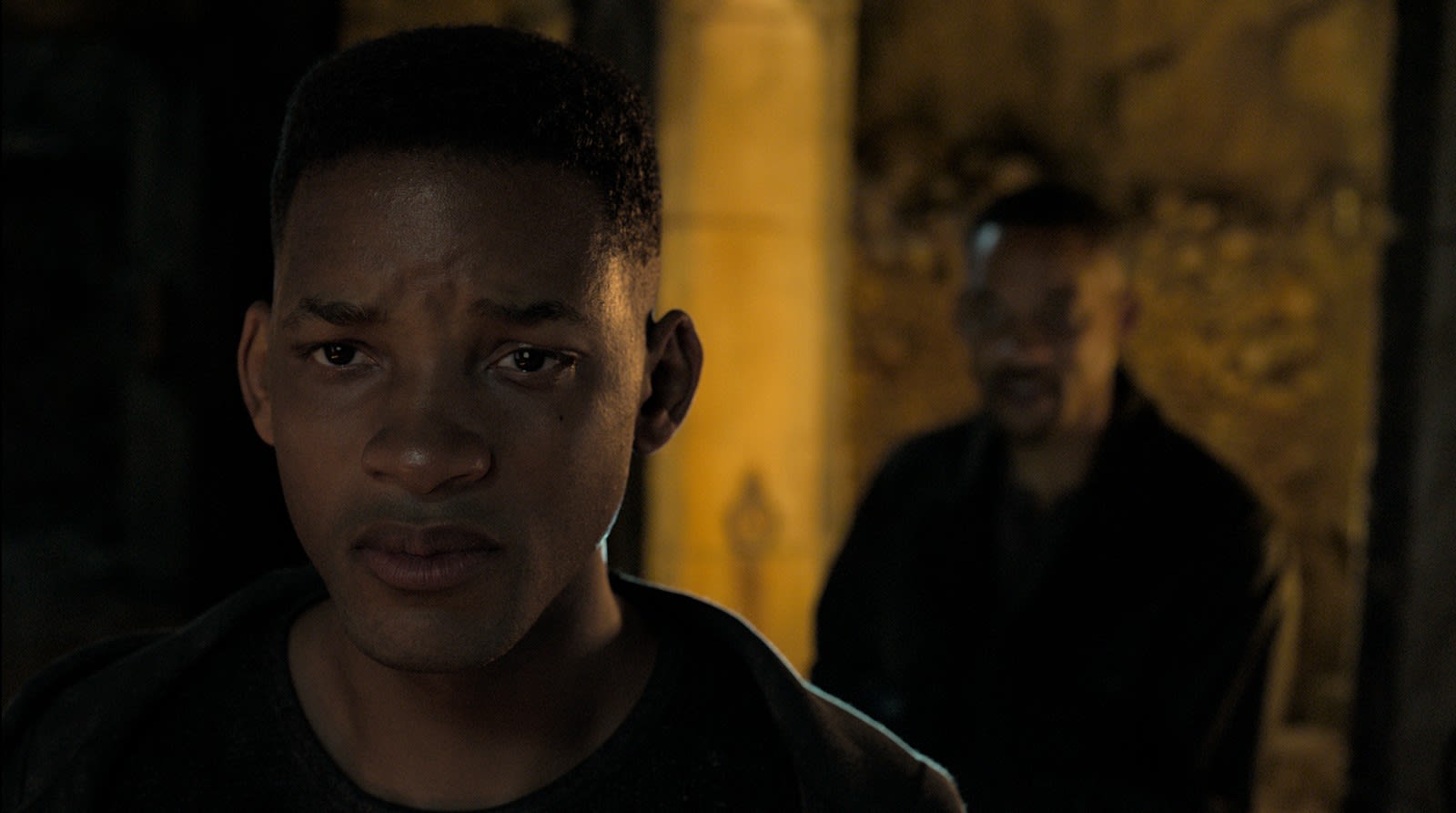 Lee also pushed for Will Smith's clone, Junior, to be an entirely CG character. He's not just de-aged like Samuel L. Jackson in Captain Marvel -- he's built completely from the ground up by Weta Digital to recapture Smith in his youth. So, in a way, Junior is more closely related to Gollum from Lord of the Rings than an actual human who's had a bit of computer-assisted wrinkle reduction. His performance is motion captured by Will Smith and stuntmen, and his face his painstakingly recreated by Weta. This allows Junior to both move like a younger man, but also tap into Will Smith's talents for his facial movements.

"The man gave peace of his heart," Lee said. "He actually has to act harder than his usual job. No, ten times harder. If you'd like to talk about hard, Junior has it hard, a lot more than a real person. The investment we put into it to try to make believe that was a hundred times harder than just directing an actor or movie star." 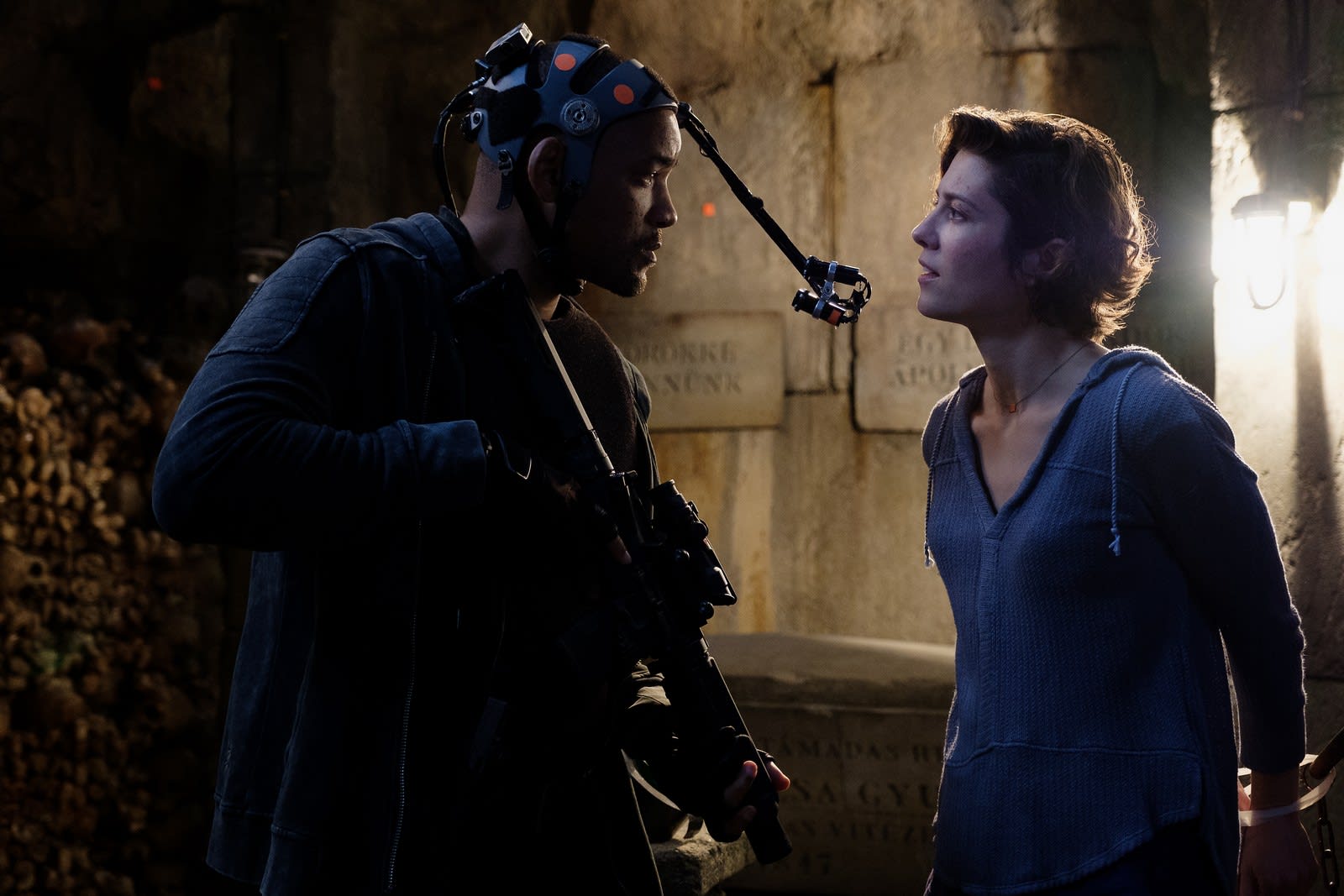 Lee doesn't seem too concerned about actors just becoming digital characters that we can easily manipulate in the future, like the film The Congress. "But anything can happen," he says. Junior isn't a perfect digital facsimile of young Will Smith -- at times, you can easily tell that the facial rendering feels a bit off -- but he's a big step towards seeing completely digital actors in more films.

No matter how Gemini Man ends up being received -- it currently sits at 24 percent on Rotten Tomatoes and has grossed just $20.6 million in its first weekend -- Lee still plans to continue chipping away at the possibilities of digital cinema.

"Digital is more attractive to me now because it's harder," he said. "I'm curious, I have so many questions... It's not like I'm like 36 or something. I'm in a hurry to find some answers to those questions. And it seems like every answer I get, then 10 questions open up."