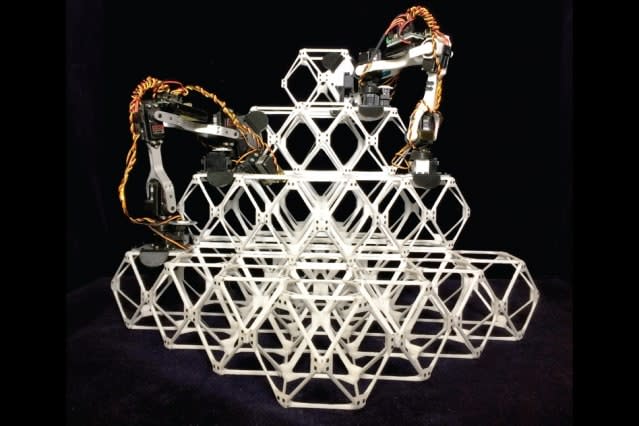 A new robotics breakthrough could revolutionalize how we build everything from airplanes to bridges and even massive superstructures. A team of researchers at the Massachusettes Institute of Technology's Center for Bits and Atoms have created a new type of robot.

The team calls their creation BILL-E, short for Bipedal Isotropic Lattice Locomoting Explorer -- and, yes, it's named after WALL-E. Each one looks like a small arm, with a hinge at the middle that gives the robot its signature inchworm-like gait. At both ends of the arm, BILL-E features tools for clamping down on structures the team has termed "voxels." Cute though it may be, BIIL-E isn't the breakthrough here; it's the relationship it has with the voxel structures mentioned above.

"You can't separate the robot from the structure -- they work together as a system," one of the researchers involved in the project, Professor Neil Gershenfeld, told MIT News. What the voxels allow BILL-E to do is navigate 3D space without a complex system of cameras, sensors and algorithms. Instead, it can keep track of its position by simply counting its steps on whatever structure it's tasked with building. This relationship BILL-E has with the building blocks it uses to create structures has led the team at MIT to describe it as a "relative robot." It also makes it more affordable to make than the specialized robots you see at factories, while also being more capable than a robot made with off-the-shelf components.

What's more, BILL-E's navigation system is easily scalable to include additional units. The software allows multiple BILL-E units to build a structure together without getting in each other's way. Another benefit of the system is how easy it makes repairs. To fix something it built, all a BILL-E unit has to do is replace any broken or damaged voxels with new ones. This capability makes the robot a natural fit for things like space stations and spacecraft since multiple BILL-E units could "live" on the structure, moving to repair it as needed.

Like with any new technology, it'll probably be a while before we see BILL-E assembling buildings. That said, the project has already garnered interest from some heavyweights. NASA, for instance, collaborated on the robot, and one of the companies that provided financial support was aircraft manufacturer Airbus.

In this article: BILL-E, construction, engineering, mit, robotics, robots, science, tomorrow
All products recommended by Engadget are selected by our editorial team, independent of our parent company. Some of our stories include affiliate links. If you buy something through one of these links, we may earn an affiliate commission.