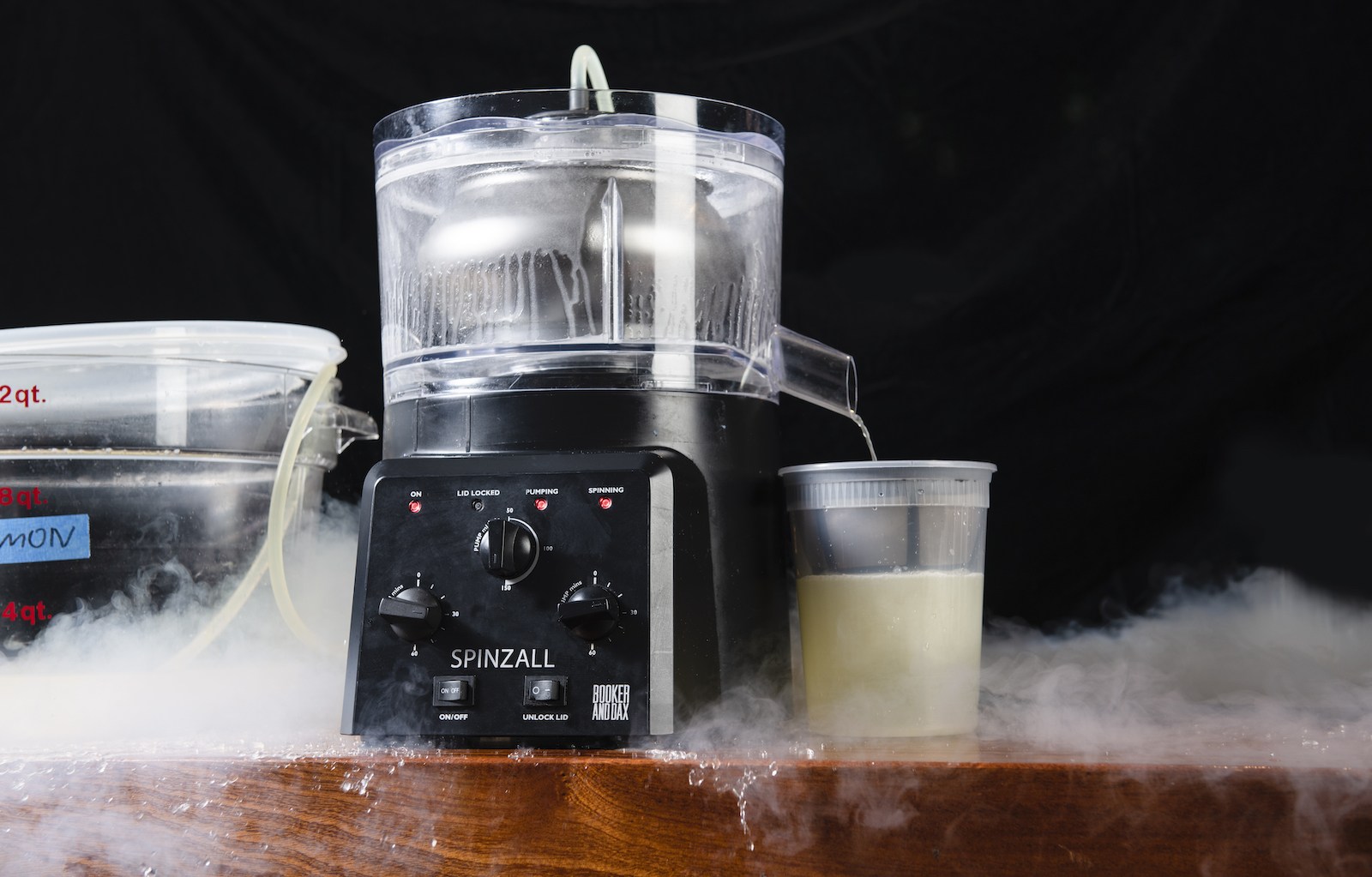 After a long morning of sweating through the first glimpse of New York City's 90-degree summer, I found myself inside a West Village bar called Existing Conditions. Its shiny leather banquettes, expensive art and mood lighting proved that the area now belonged not to the writerly bohemians of old but the Instagram influencers of new. Fortunately, as a microinfluencer, I fit right in.

But I hadn't arrived two and a half hours before the bar opened out of mere enthusiasm. After following a trend of bartenders (excuse me, mixologists) using centrifuges to craft cocktails, I wanted to taste one for myself. As well as -- let's be honest -- steal the recipe to make at home.

A mixologist named Kendra Hada had offered to walk me through her latest concoction, a $16 trifecta of citrus called Sunday Brunch. Ah, brunch, the meal of the gods, with its endless array of eggs and rising breads, plus the excuse to drink alcohol before noon. I'd heard the carbonated cocktail was almost as good as the midmorning meal itself, with gin and elderflower liqueur as well as orange, lemon and lime juices.

So it's basically an elevated lemonade, I thought to myself, imagining how much more fun my best friend's toddler's birthday party would have been if we'd served this instead of the basic version. Beyond the presence of alcohol, however, Hada's beverage had another crucial difference.

"Everything in my cocktail," Hada said shortly after I arrived, "wouldn't be possible without a centrifuge."

As she spoke, she pointed at three mammoth pails of clear liquid balancing on the dark wood table in front of us. She was prepping for a charity event where she'd serve dozens of Sunday Brunch cocktails and had spent hours squeezing lemons, then clarifying the juices with a centrifuge.

The orange juice smelled like the moment you cut into a fresh piece of the fruit. The lime-like zest flew up my nose. The lemon smelled and tasted like a Warheads candy.

Molecular gastronomy chefs have been using centrifuges to clarify juices, create flavored oils and make the clearest consommé in the world for years. For those of us who haven't heard the word since high school chemistry class, a centrifuge simply spins liquids at high speeds, separating the various components in them by density. So whole milk, for example, can be spun into super-dense cream on one side and low-fat thin milk on the other.

British chef Heston Blumenthal of the Fat Duck is one of the most well-known proponents of the device. Celebrity chefs like Wylie Dufresne of now-shuttered molecular gastronomy restaurant wd~50 rely on the centrifuge as well. Nathan Myhrvold's thick cookbook Modernist Cuisine practically bursts with recipes requiring it, like pea butter, which the internet loves to recreate.

Mad-scientist mixologists are having their fun with it, too. The mastermind behind Existing Conditions, food scientist Dave Arnold, has a reputation for using the centrifuge in complicated drinks. Noting the machines' prohibitive price tags (upward of $8,000 each), he created his own version in 2016 called the Spinzall, which retails for $799.

Now he's trained a new generation of mixologists, like Hada, on these techniques.

Unlike Hada, I had not been trained in how to make, well, anything more complicated than a rum and coke. So I quietly installed myself at a nearby table to watch her work on the clarified orange and lime juices, as well as a lemon cordial.

Around us, a few other mixologists ran back and forth from the bar area toward the back of the building, carting humongous containers of ice, the plastic scraping across the ground as their shoulders hunched from the weight.

Always one to join in on the hard work, I asked Hada, "Can I taste each individual juice?"

To clarify a juice, you basically separate the juice itself from any leftover pulp in it. The process seems simple, provided you have a Spinzall. After squeezing oranges by the dozen into a big bowl, Hada inserted a tube which started siphoning juice into the Spinzall. The machine whirled the juice around at crazy-high speeds and extracted a liquid into a tube on the other side. Voila: juice as clear as Adele's voice.

The liquids might have looked identical, but a quick sniff of each clarified the matter. The orange juice smelled like the moment you cut into a fresh piece of the fruit. The lime-like zest flew up my nose. The lemon smelled and tasted like a Warheads candy, though finished with quinine powder, it evoked aggressive flavors of lemon peel. Each tasted different from its regular sweet counterparts as well as somehow brighter and more acidic.

To complete the Sunday Brunch cocktail, Hada simply combined all the ingredients (clarified and other) in a plastic bottle and made the whole thing sparkly. Behind the bar, she attached the carbonation hose to the top of the two-liter plastic bottle, making sure there was some room in the bottle for the liquid to expand. Then she pressed a button and leaned with her full weight onto the top of the bottle to encourage carbonation -- a process she likes to repeat. When I tried to press the button and jump like she did, the bottle didn't budge. On the plus side, I stubbed my toe pretty badly.

"Adding seltzer just dilutes beverages," Hada explained, ignoring my yelps. She poured the finished cocktail into a glass for me. "That's why we carbonate everything together, including the alcohol."

"So when do I get to see the Spinzall?" I finally asked after I'd downed it. My juice cups were still full though. Was it bad form to leave leftovers of such a clarified rarity? I wondered if I should chug the lot. Then I realized my mouth was still poised in a semi-permanent pucker. I backed away from the juice.

Hada walked to the bar counter and put her hand on the top of what I'd thought was a food processor. It was the almighty Spinzall! It looked a bit worse for wear and much smaller than I'd imagined yet regal with its 4,100 revolutions per minute and almost 2,000 Gs of force.

I considered asking Hada to borrow it but then thought better of it, as she'd probably ask for my firstborn child in return -- or, worse, my beloved 11-year-old shih tzu, Echo. You can do this on your own, I told myself, remembering that time I made a whole recipe out of the Bar Tartine cookbook.

All I needed, after all, were some lemons, limes, oranges, quinine powder, Saint Germaine, gin, water and saline solution. Plus a centrifuge and some sort of extreme carbonation device. Easy.

Even after discovering that my SodaStream would explode if I placed gin lemonade in it, I still felt that this cocktail would hardly be a challenge. I'd made a cake of pickles, for God's sake. Surely this was child's play.

I felt the same way when I bought a $90 benchtop centrifuge from Amazon that had similar specs to the Spinzall and a Micro CO2 regulator for SodaStream tanks from the Weekend Brewer. Add a sturdy ball lock line assembly hose for brewing and I was in business. I even dreamt of opening a bar in my backyard called Pre-existing Conditions, which would serve a cocktail called Sunday Brinner.

The juicing effort went swimmingly, mainly because I was assisted by excellent instructions that arrived with my centrifuge.

"From the heart in operation, it is strictly prohibited to play boot lid," the safety information assured me.

"Ah," I thought, skimming the page as I gathered all of my materials on my kitchen counter.

"I see," I thought, spilling lemon juice into the center of the machine as I transferred it from my bowl to the test tubes. Why test tubes? The budget centrifuge did not have a method to make large batches of clarified juices but instead required me to pour minute amounts of liquid into a handful of tiny tubes, which I then inserted into the machine one at a time. Handily, this only allowed me to make half a cocktail recipe at one time.

After locking and loading my tubes, I wasn't sure at what voltage or speed to run the thing, but shut the lid and span the two knobs as far to the right as they would go.

The gray, microwave-sized hunk began vibrating on my kitchen counter so violently that it started migrating toward the stove. I held it for a few moments, but it turns out I'm no better with centrifuges than I am with babies and it continued to wail. Eventually I rearranged the test tubes so the juiciest ones sat across from one another, which seemed to soothe the machine into submission. A few minutes later, I had made practically clear juice. The regular lemon juice looked vaguely urinal compared to this pristine liquid, and I scoffed at all the plebs in the world drinking opaque juice while I held this new power of creation.

I held it for a few moments, but it turns out I'm no better with centrifuges than I am with babies and it continued to wail.

The real fun came when I'd mixed together all the ingredients and was ready to carbonate the concoction. After a brief discussion with Engadget managing editor and avid home brewer Terrence O'Brien about not exceeding the amount of pressure that might cause an explosion (eh, that's what safety goggles are for), I was ready.

Except, as I've written before, I spend my life generally having trouble with three-dimensional objects (dropping a full glass of water for no reason is called "pulling a Megan" in my house). Enter weeks of trying to connect the micro-regulator to the cartridge adapter to the soda CO2 tank input adapter to the barb output adapter to the hose to the carbonation tank to the empty soda bottle that Hada recommended using. And no, of course I did not cry.

Finally, after several lengthy talks with Engadget staff who are more crafty than I, and the addition of a missing part from the Weekend Brewer, it was time. I poured my fresh cocktail into the soda bottle, set the dial and started dispensing.

Crack! The soda bottle immediately puffed up. Whoosh! A stream of cold air flew uncontrollably out the side of the regulator. Woof! My dog, who had come to see what all the commotion about, barked loudly as the air blasted straight in his face.

But it was all worth it because as I unscrewed the various devices, I knew I'd taste the nectar of success, a carbonated gin lemonade all my own.

Alas, it was flat. And no matter how many more times I tried (Hada had said it takes at least three), only a few bubbles burbled from the bottom of my bottle. With one hand, I poured my weeks-long project down the sink, and with the other I slopped some gin and juice into a dirty glass. I needed a drink.

In this article: centrifuge, cocktails, food and drink, food-and-drink, foodanddrink, gear, longread, Mixology, spinzall
All products recommended by Engadget are selected by our editorial team, independent of our parent company. Some of our stories include affiliate links. If you buy something through one of these links, we may earn an affiliate commission.