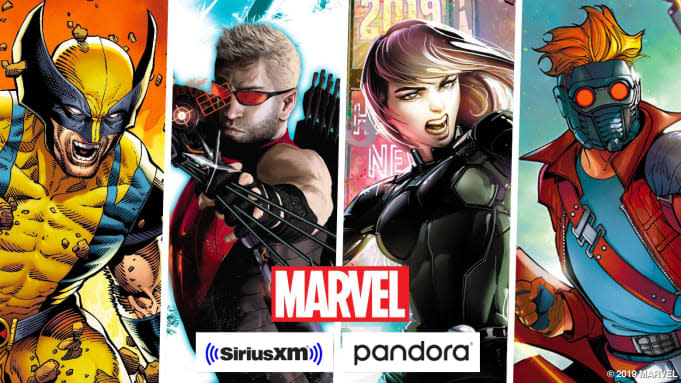 After producing two podcasts with Stitcher, Marvel plans to greatly expand its audio output in a move the company is describing as its "most sweeping podcast deal ever." Starting next year, the media giant plans to create five new scripted series, in addition to several unscripted ones, for SiriusXM and Pandora.

Each of the scripted series will be 10 episodes long. In turn, the first four will focus on Wolverine, Hawkeye, Black Widow and Star-Lord, with the fifth and final series seeing the four superheroes teaming up. As for what else you can expect from the company, Marvel says one highlight will be a regular talk show series that will feature celebrity interviews. The two companies also plan to host themed live events as part of the multi-year partnership.

If the quality of Marvel's Wolverine: The Long Night podcast is any indication of what fans can expect from the company's new slate of audio productions, then they're in for a treat. The Long Night was a slick production that featured Castlevania's Richard Armitage voicing Wolverine. If you've already listened to The Long Night, Marvel's latest podcast, Marvels, is set to premiere this fall.

In this article: audio, Black Widow, entertainment, hawkeye, internet, marvel, pandora, podcast, podcasts, services, SiriusXm, Star-Lord, Stitcher, streaming, Wolverine
All products recommended by Engadget are selected by our editorial team, independent of our parent company. Some of our stories include affiliate links. If you buy something through one of these links, we may earn an affiliate commission.