The Louvre has assembled the greatest Leonardo collection ever.

HTC created Vive Arts back in 2017 to bring museums and the public together in VR, but you may not have thought about it since then. It's definitely grabbed our attention now, though, with its latest, very high-profile experience, Mona Lisa: Beyond the Glass. It launches at the Louvre on October 24th in conjunction with Leonardo Da Vinci, the largest exhibition of the great master's works ever assembled.

The idea behind the experience created by the Paris VR studio Emissive is to teach you more about the painting and history around the Mona Lisa, so you can better appreciate it in person. At the same time, users who can't get to the Louvre can get the same experience from the comfort of their home.

HTC has a special room inside the exhibition with 11 Vive Cosmos headsets where visitors can try it out. "It's the first time that we are using virtual reality as an experience for visitors within the Louvre," said the museum's director of interpretation and cultural programming, Dominique de Font-Réaulx.

HTC let me preview the experience, then brought me to the Louvre to see the exhibition ahead of the public opening. The idea was to give me the entire experience as the public might see it. 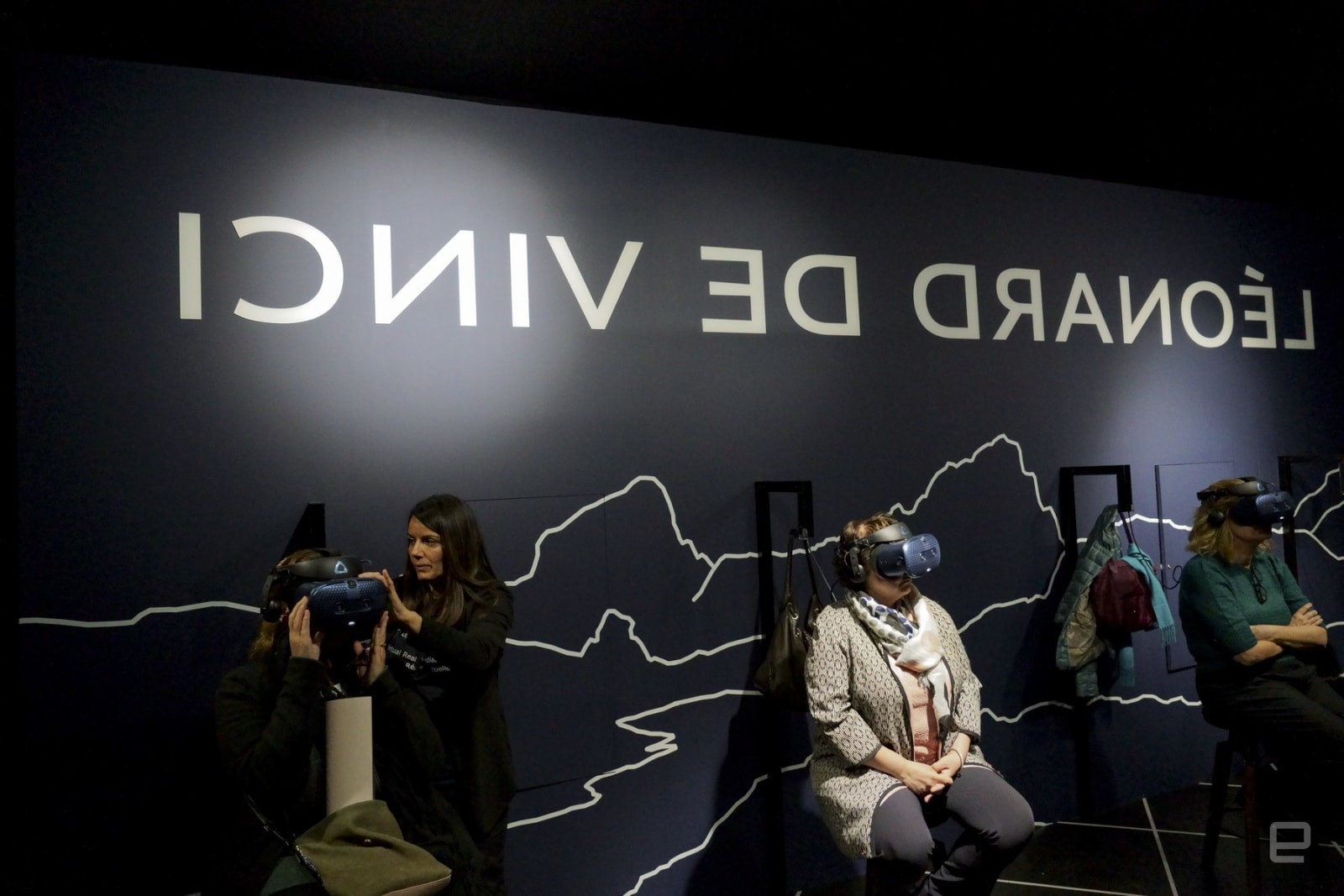 The key idea that the team wanted to get across was how da Vinci's otherworldly talent and intense scientific curiosity transformed how art was created. "The composition and the technique he used was a revolution at this time because he created a new way of painting people," Emissive art director Emmanual Gorinstein told Engadget.

Donning the headset at Emissive's studio, I first learned that the "canvas" was actually a poplar wood panel with a repaired split at the top. After that, I saw how infrared scans revealed da Vinci's famous sfumato technique of layering paint to create the subtle gradations between light and dark that you see in the real world.

From there, things got more interesting. The narration debunked myths that the painting's subject was a low-born person or even a prostitute who wore her hair down. Rather, she was wearing her hair in a veil and simply had a few hanging curls. That's not perfectly clear in the painting, but the infrared images show it more clearly.

On top of that, she's wearing a dress with a gold-colored fabric that only a noble person would have possessed. That helps affirm the idea that the sitter is Lisa Gherardini, the wife of the wealthy silk trader Francesco del Giocondo (which is why the painting is known as La Gioconda in France).

The most dramatic reveal in Mona Lisa: Beyond the Glass is a 3D-modeled version of the woman herself. The VR artists used X-ray, infrared and refractive data gathered by the Louvre to infer what her face and body probably looked like, and they studied perspective to deduce the length of her nose and other details. They also did a detailed recreation of her clothes, to the point of making sure that they folded realistically when she moved.

Emissive's team also attempted to recreate the fantastical background behind the subject. They first removed her from the background, then extended it out and tried to guess what it would look like.

"The landscape behind Mona Lisa was never intended to be a realistic one," said Gorinstein. "Rather, it comes from da Vinci's imagination and his knowledge of geography in the region, and is part of the magic that makes the painting so mysterious."

Finally, they placed the 3D version of Mona Lisa in front of the newly recreated background and posed her just as she is in the painting. That essentially put me in Leonardo's place, seeing her as he might have done. At the end of the experience, I soared around the magical landscape in one of Leonardo's glorious but impractical flying machines.

After all that, I was shuttled over to the Louvre. I was hoping to put some of my new Mona Lisa knowledge to good use, but although the exhibition features eight da Vinci paintings (along with numerous drawings and other works), his most famous work was off limits that day. It will remain in its usual gallery in the Denon wing throughout the exhibition because it's too fragile to be moved much, even within the Louvre.

One painting that's completely missing, by the way, is the $450 million Salvator Mundi with a famously controversial provenance. However, following a legal battle, the exhibition will include Vitruvian Man, which is perhaps da Vinci's second most famous work. I didn't get to see it, unfortunately, as it won't arrive until next week.

None of that mattered, though. Seeing all of da Vinci's works in one place is an emotional, overwhelming experience. Every painting (especially those directly attributed to da Vinci rather than his workshop) is alive and dynamic in a way that's still, to this day, beyond anything else I've seen. The exhibition features a number of paintings by other artists with a connection to da Vinci's works, and most suffer by comparison. 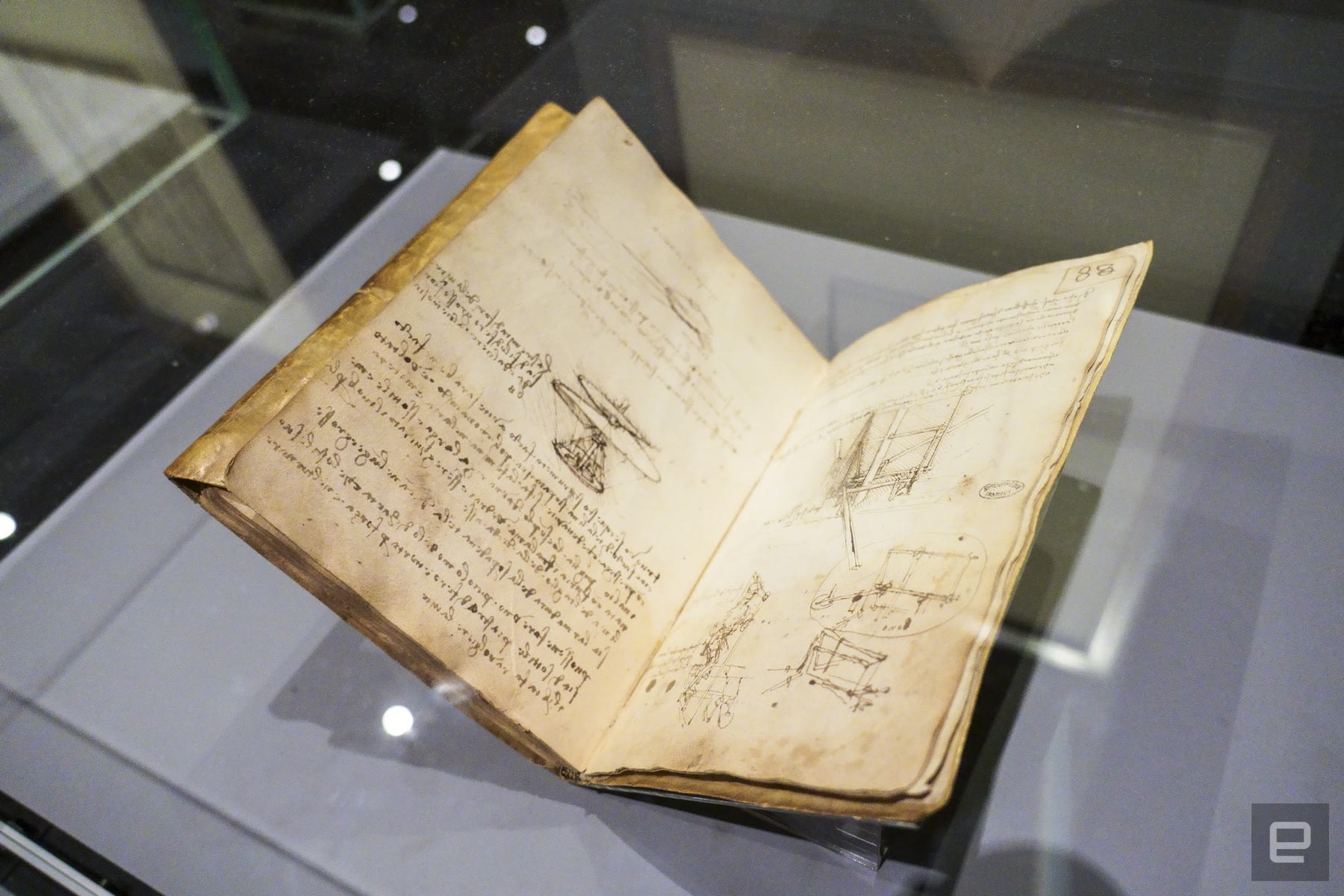 The paintings have discolored and aged over time, making details difficult to discern. As such, the Louvre has included backlit infrared renderings of each painting that show brushstrokes and other details with more clarity.

Perhaps the best part of the exhibit is the extensive catalog of Leonardo's drawings and notebooks. His particular genius as an artist came in large part from his exacting studies of nature and human anatomy. Whether you're into art or science, it's incredible to see his studies of perspective, astronomy and flight, including his steampunk-like ornithopter design (above).

At the same time, the drawings show that Leonardo had an innate talent to draw whatever he saw, bringing scenes to life with a few deft strokes. A quick sketch of the hanged body of Bernardo di Bandini Baroncelli, for instance, captures the emotion of the scene with a few quick strokes. And while da Vinci was famously deliberate, he could capture life almost as quickly as it happened, judging by his sketches of babies playing with cats. 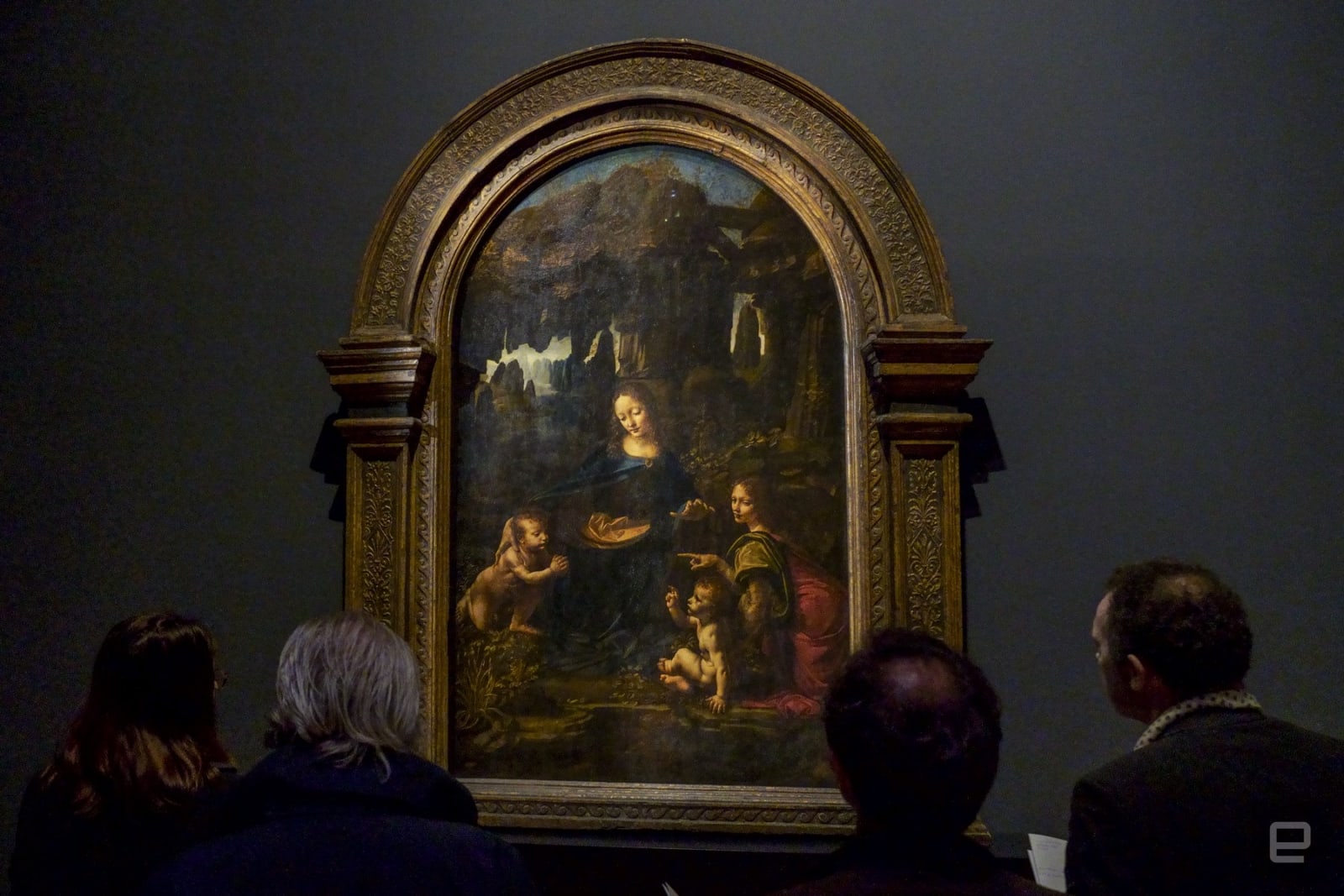 The Louvre exhibition makes it clear that you can't separate the scientific and artist parts of da Vinci. Many of the paintings, like The Virgin of the Rocks, have religious themes. However that work may also contain a subtle criticism of religion, based on da Vinci's observations of fossils.

You can get the Mona Lisa VR experience at home on Vive headsets, provided you subscribe to HTC's VR subscription service, Viveport Infinity. If you're lucky enough to be in Paris between October 24th, 2019, and February 24th, 2020, you can have both the VR experience and see Leonardo's works in person for €17 (about $20). Just keep in mind that you'll need to book a slot ahead of time.

I've seen a lot of art exhibitions in Paris, but, even in its incomplete state, nothing as powerful as the Louvre's Leonardo da Vinci. And HTC's Mona Lisa: Under the Glass was a fun, educational part of that, though I felt it could have gone a bit more into detail. Still, seeing La Gioconda herself, in the flesh, made it worthwhile, and given the detailed studies of perspective, history and geography needed to create her, I think Leonardo the scientist would have approved.

All products recommended by Engadget are selected by our editorial team, independent of our parent company. Some of our stories include affiliate links. If you buy something through one of these links, we may earn an affiliate commission. All prices are correct at the time of publishing.
View All Comments
HTC recreated the 'Mona Lisa' in 3D for the Louvre's da Vinci exhibition